Guillermo Del Toro’s latest project is a traveling exhibition that houses the filmmaker’s most personal collections, films and notebooks.

“The reason I create monsters and love them is that I think they speak to a very deep, spiritual part of ourselves. It is my most cherished desire that as you leave the exhibition, the monsters follow you home and that they live with you for the rest of your life.” – Guillermo Del Toro 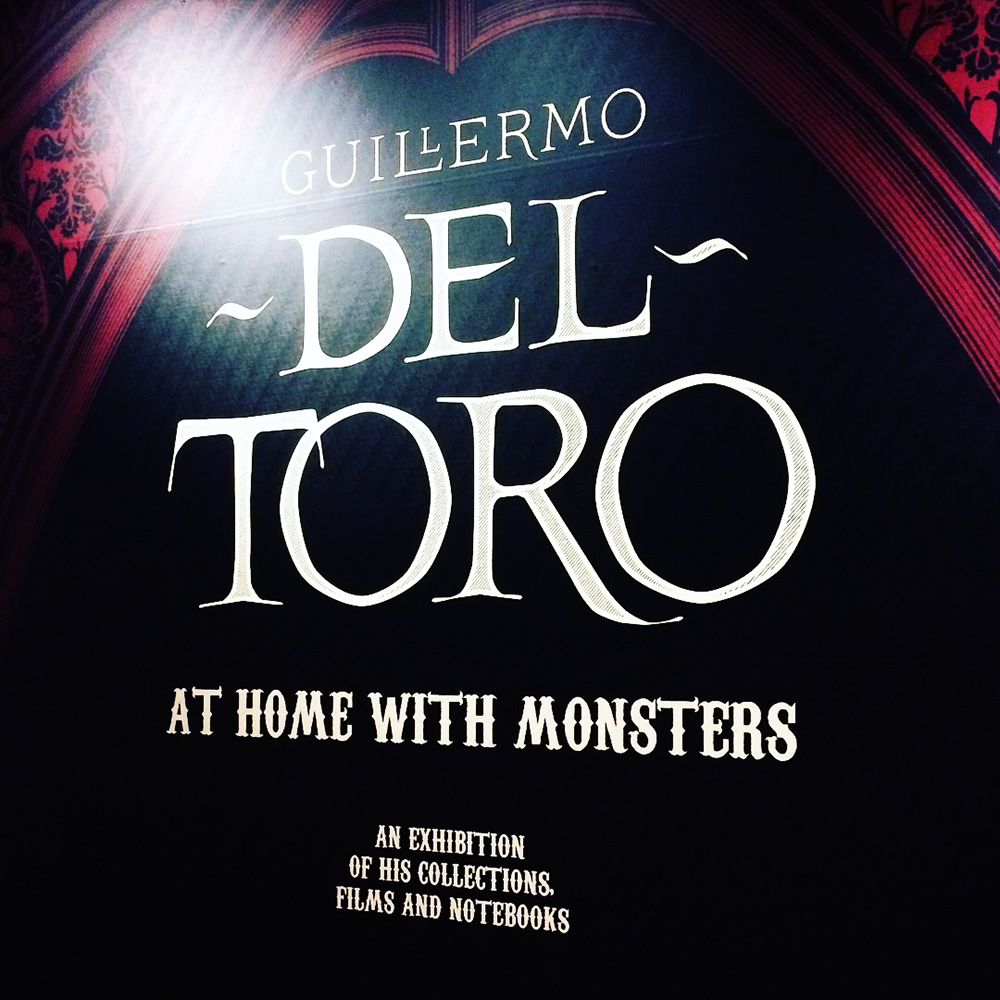 Entitled ‘Bleak House’ (currently housed at at Ontario’s AGO), one weaves their way through a personal telling of Guillermo Del Toro’s darkest and most personal moments, as well as many of his incredible cinematic accomplishments and inspirations.

‘Bleak House’ is the name of Del Toro’s favorite residence located just outside of Malibu, California, where the majority of his writing is done. He chose the name after his favorite 1853 Charles Dickens novel of the same name. 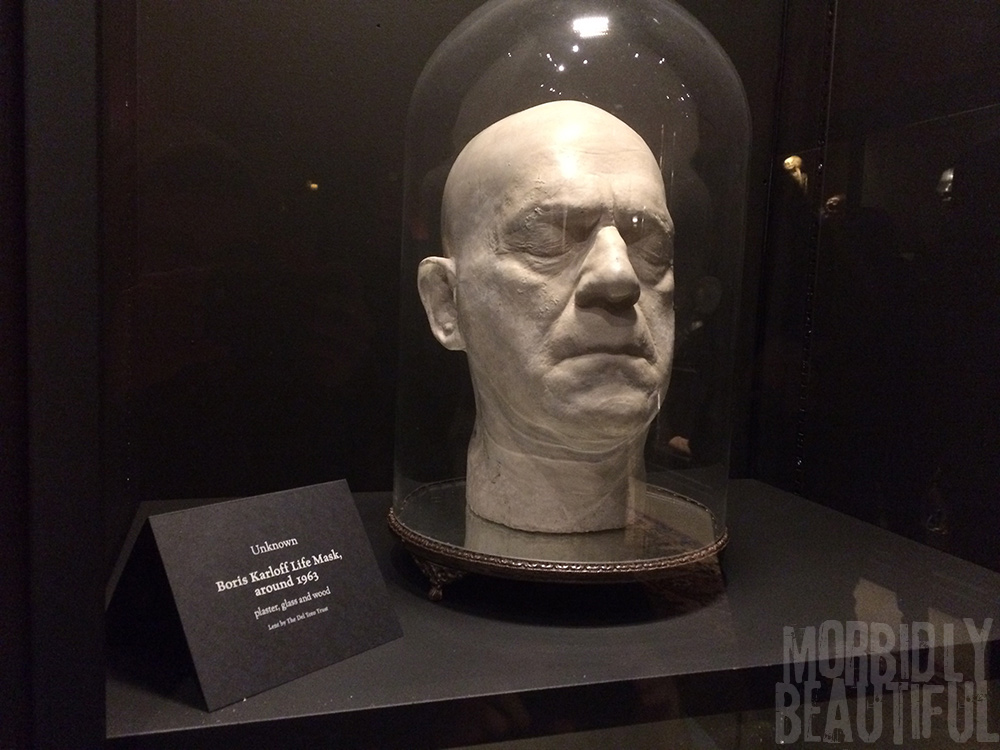 The residence contains over 13 themed personal libraries, including books, fine art, comics, paintings, drawings, toys, prints, sculptures, magazine and models. The exhibition includes various collections featuring displays for 8 of his 13 themed rooms, which offers one a great deal of insight into the mind of this unique filmmaker.

Del Toro’s first theme truly starts where it all begins: ‘Childhood & Innocence.’ Here he shares things from his own childhood which greatly influenced the types of films he strives to create. Most of his films feature children as the main or central characters. Yet he does not protect them, as often it is their perceptive as children which ultimately saves them. 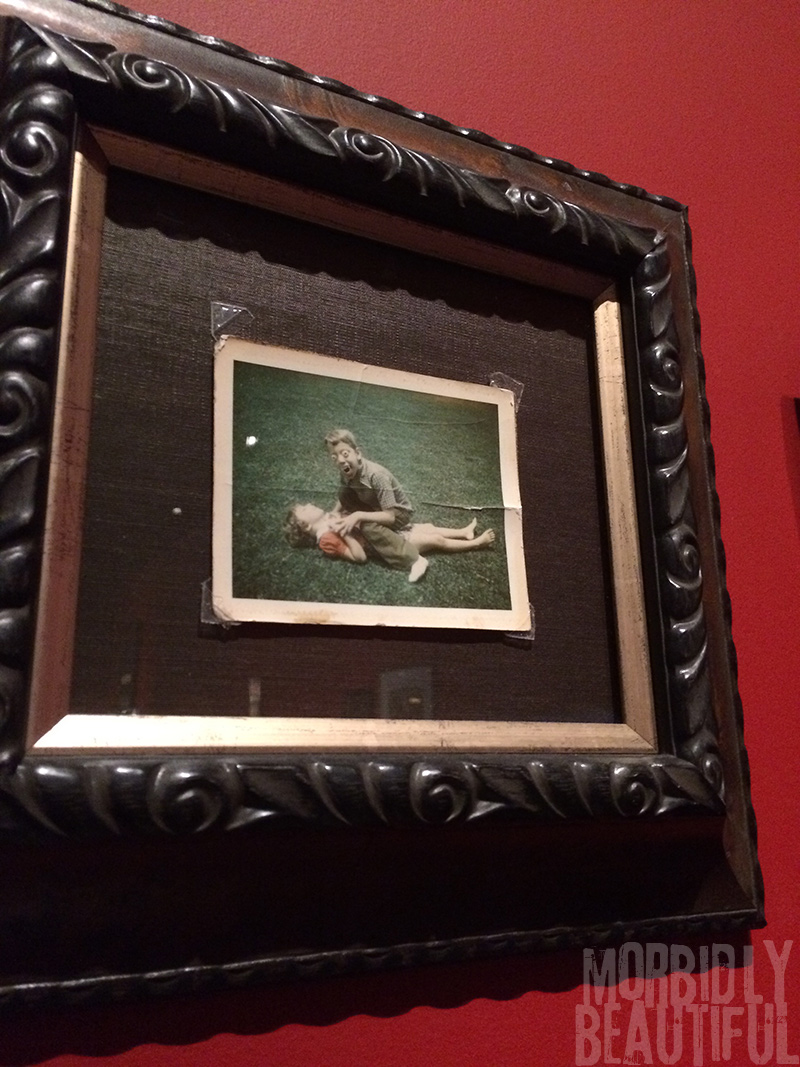 Del Toro admits to regularly struggling from intense and emotional memories, largely consisting of his grand-mother’s repressive interpretation of Catholicism (she attempted to exorcise him twice and would place metal bottle caps in his shoes as a form of penance.) He explains, “For me, childhood is the forge of the soul. I think that everything that is right with us is cemented in our first 7 or 8 years.”

His second theme, ‘The Sinister World of Disney” is a large cornerstone in his collection. The appeal for him lied in Walt Disney’s dark and macabre story lines, as well as genuinely evil villains. 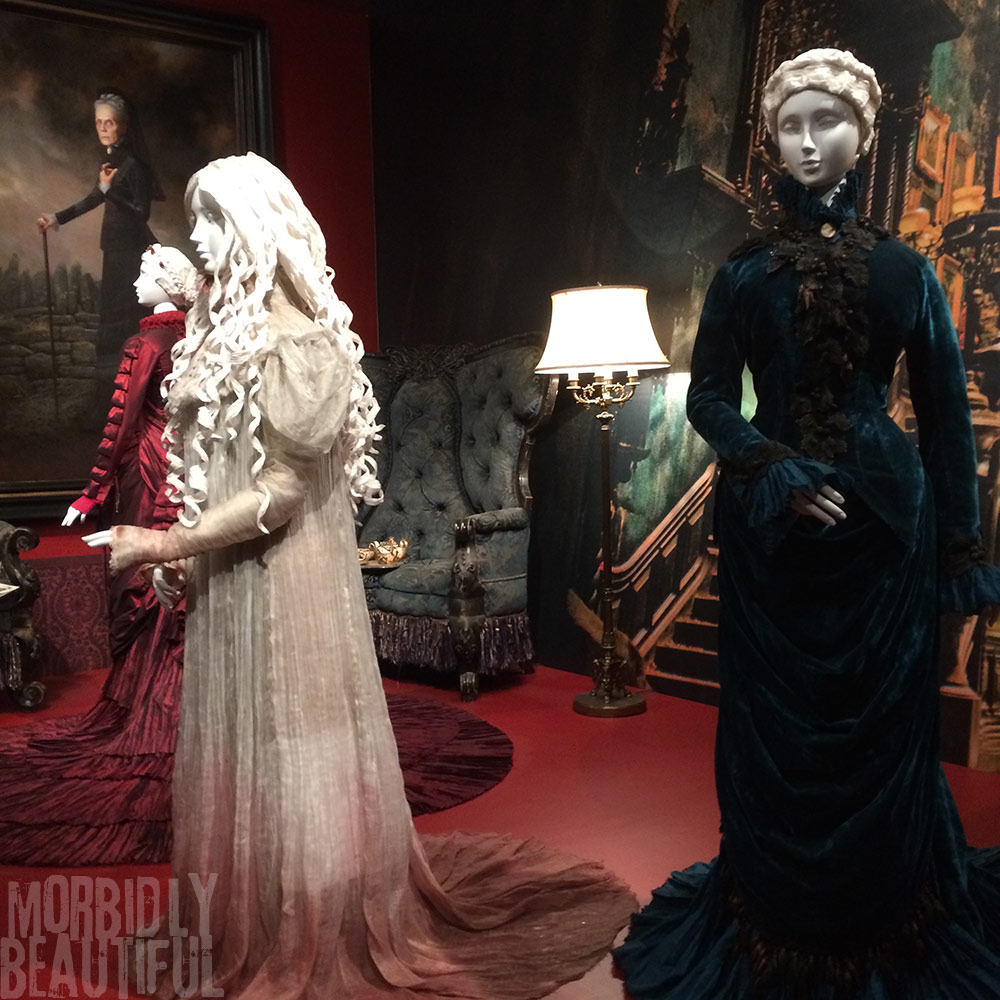 ‘Victoriana’ is the third theme of his exhibition, as well as the theme of his ninth movie Crimson Peak — set during the Victorian era and including numerous traditional gothic themes. For Del Toro, this era provides him with endless visual and narrative inspiration.

“I am obsessed with Victorian culture,” says Del Toro. “I have a room of my library at home called ‘The Dickens Room.’ It has every work by Dickens, Wilkie Collins and other Victorian novelists, plus hundreds of works about Victorian London, customs, etiquette and architecture.” 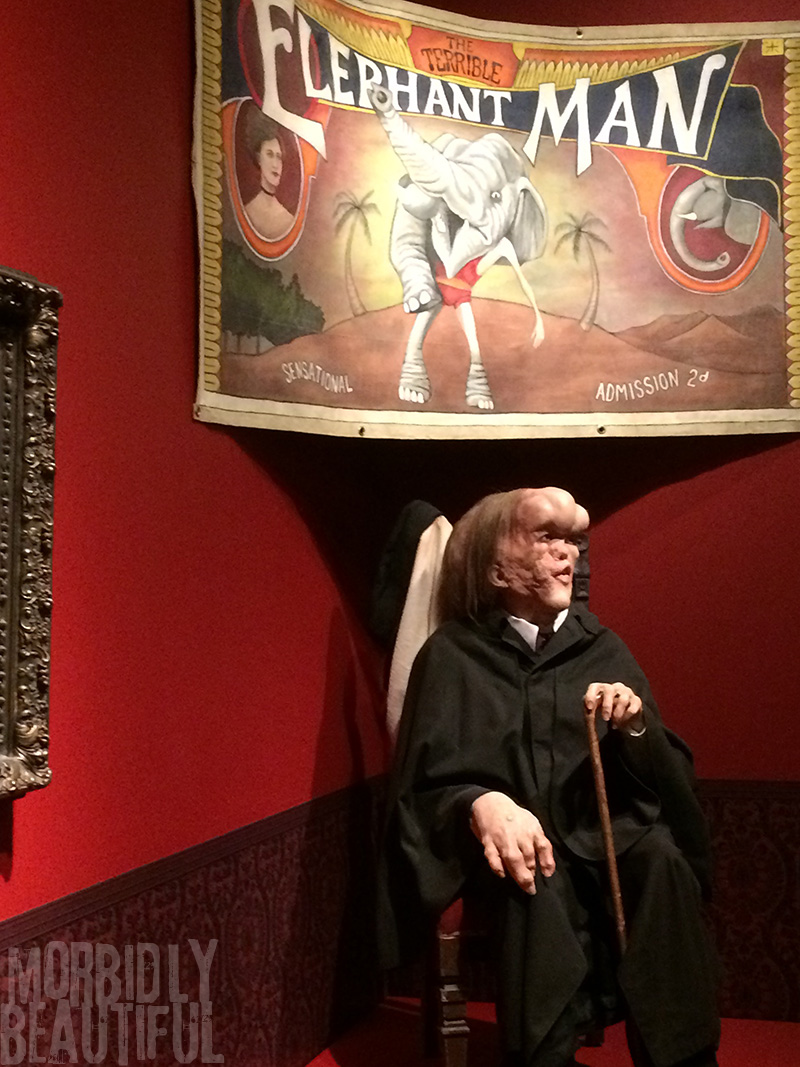 My personal favorite from ‘Victoriana’ was the ‘Rain Room’ — an idea Del Toro found in Dickens’ “Bleak House” and brought to life with his vast knowledge of special effects, rigging a room complete with projections and rain splattered windows. He explains, “As a kid I dreamed of having a house with secret passages and a room where it rained 24 hours a day.”

His next theme, also popular in many of his films, is ‘Death and the Afterlife.’ Del Toro first confronted death at the age of 4 and continued to have many experiences involving this as he grew up. Although he was raised catholic where immortality was seen as a reward for obedience and submission, he sought to contrast the aspect in order to show that, in his opinion, those who seek it are often misguided, arrogant
and will eventually suffer perpetual misery. 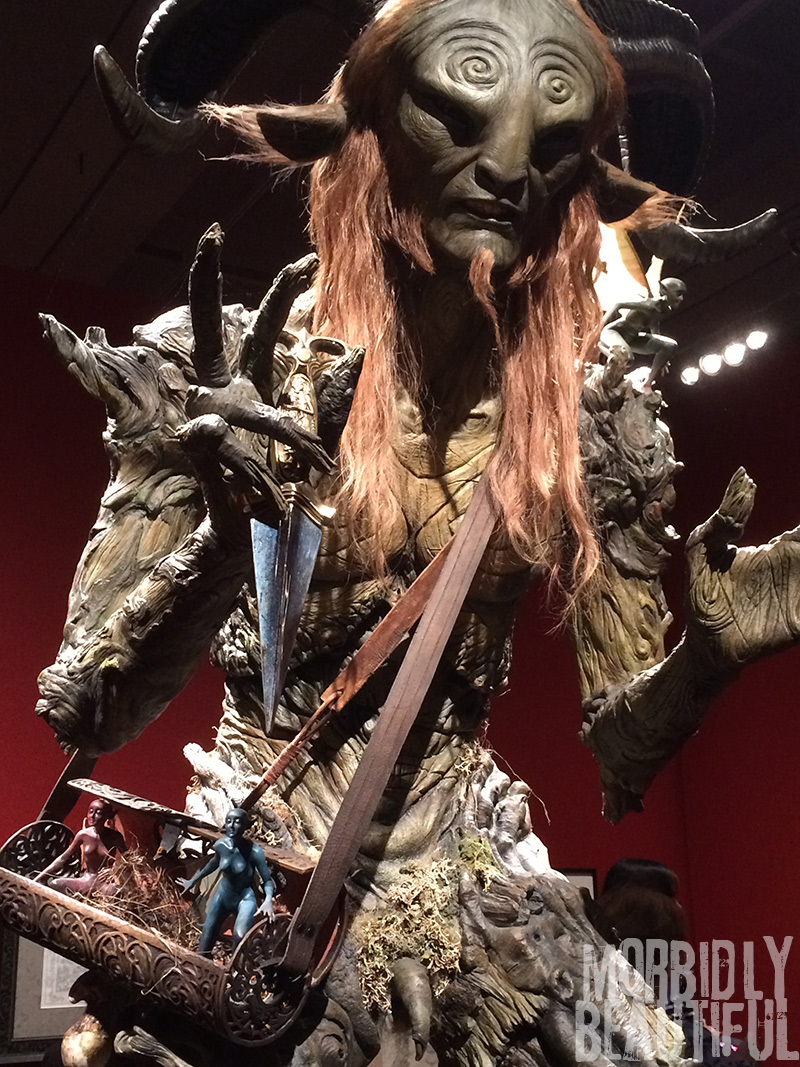 Rather than viewing death as a negative, he prefers to embrace it as the very essence of life.

His next room focuses on ‘Magic, Alchemy and the Occult’, which is clearly a personal favorite for him — his films are filled with puzzles, secret worlds and quests seeking forbidden knowledge.

“I find that most art is alchemy. Certainly, film is alchemy. You are creating something transcendental and pure and beautiful out of a lot of vile matter, which is what alchemists did. They took common metals, like lead, and elevated them into a metal that they thought sublime, eternal; gold.” 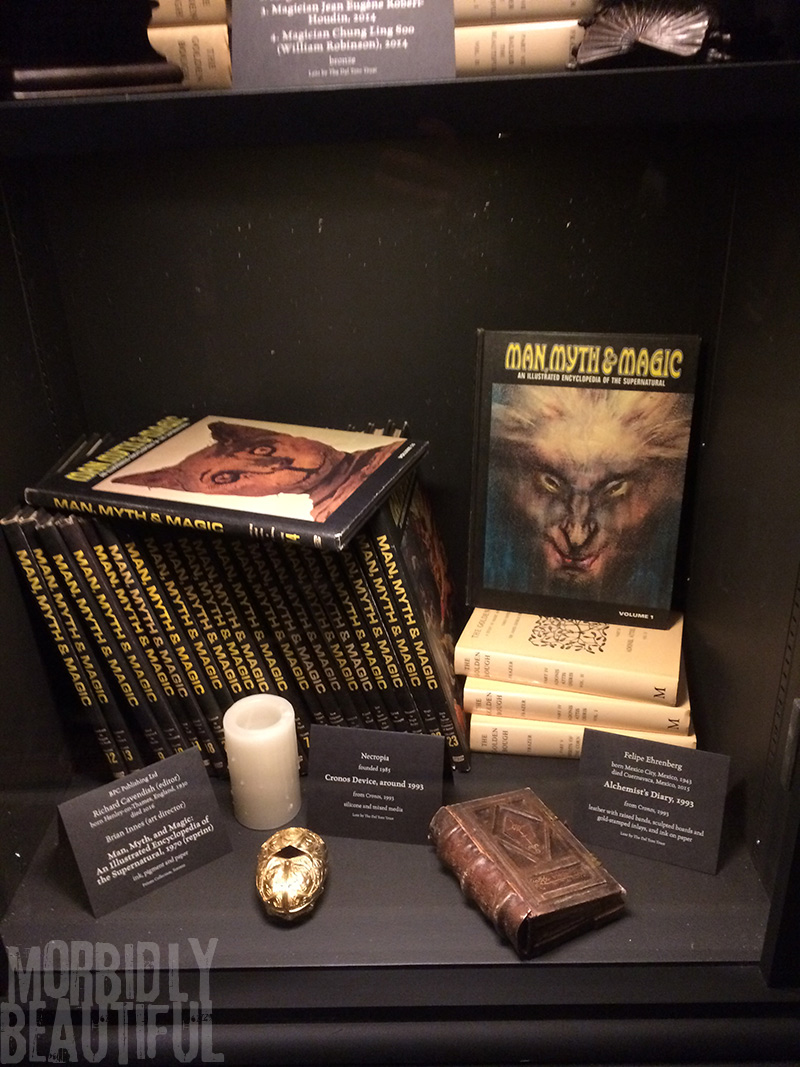 Moving into one of Del Toro’s final exhibition libraries, the seventh theme of ‘Outsiders’ is revealed. This is something he’s personally always identified with and a common underlying theme in almost every film he has created.

One of his favorite films, Tod Browning’s 1932 Freaks, is an incredible example he uses to illustrate the idea of monsters and freaks as social constructs — using able bodied people to represent the “freaks”, believing that the “real” monsters are the ones who appear the most normal. 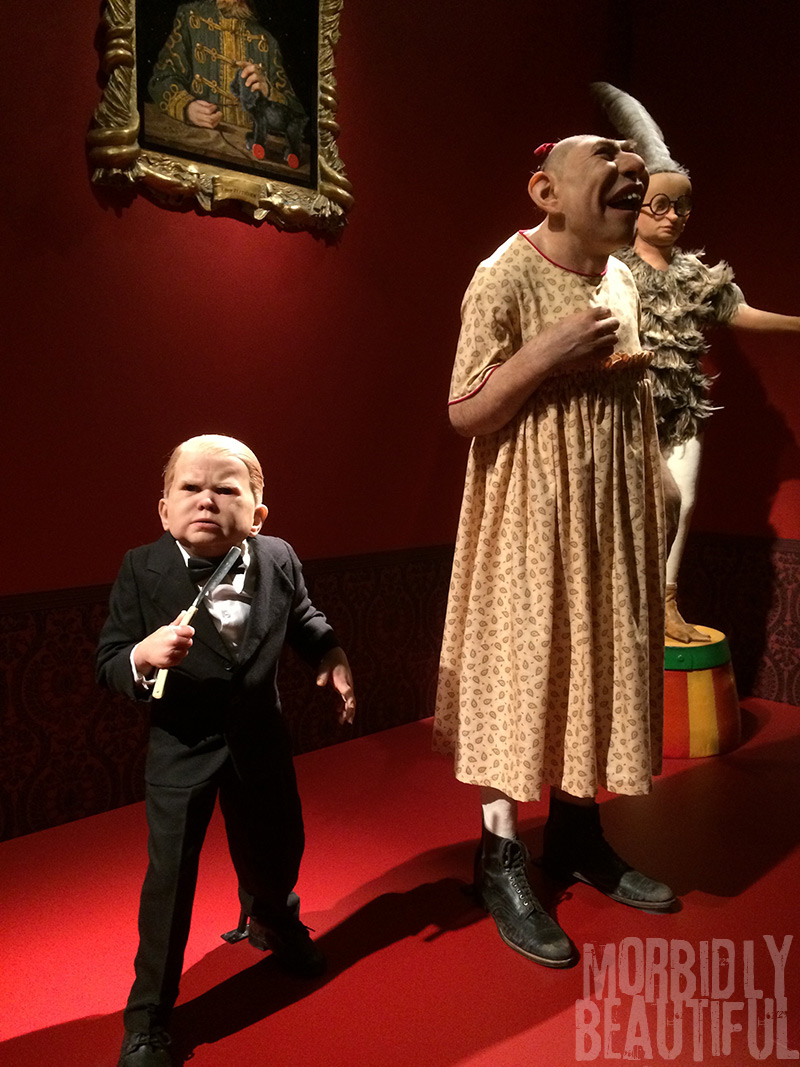 The last theme identified by Del Toro in his exhibit is none other than the horror classic ‘Frankenstein and Horror.’ With nothing but an outsider’s status, he felt a great connection to the classic horror character. He views the monster as a victim..the only sin he was truly responsible for was being brought into a world that couldn’t accept him. 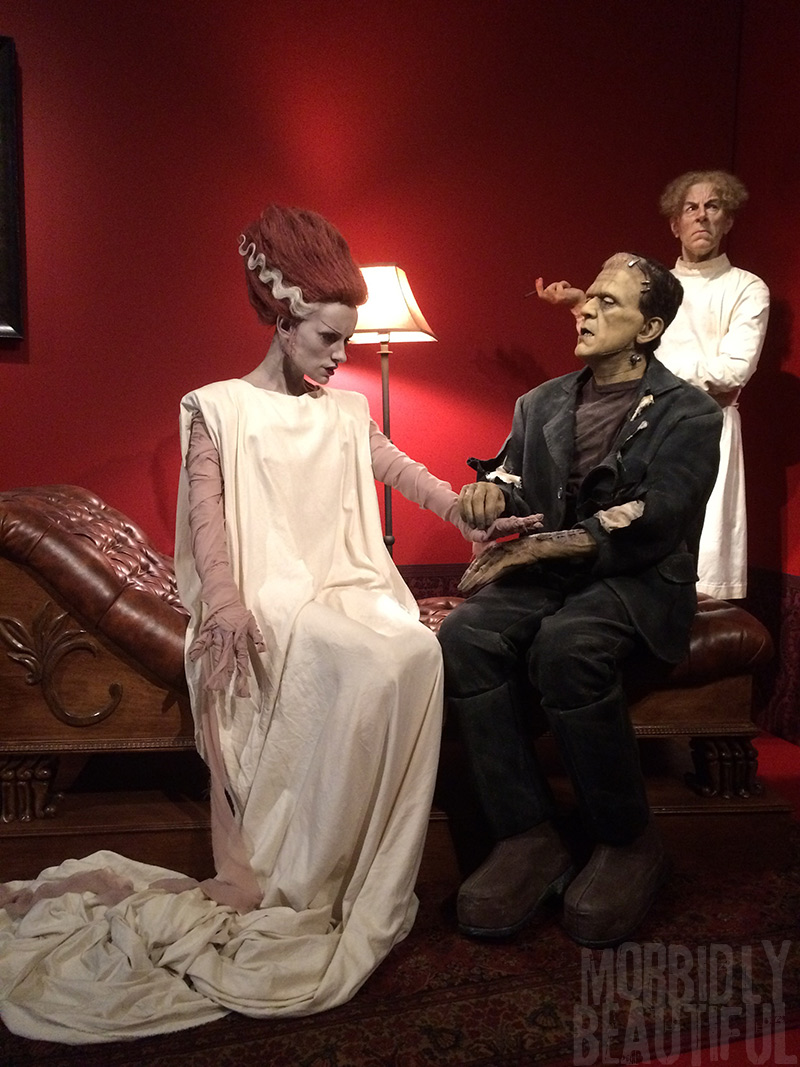 “Frankenstein, to me, is instrumental in the way I see the world… It is the essential narrative of the fall of man into an imperfect world by an uncaring creator.”