HBO Max gets in the spooky spirit with an extensive catalog of great horror and Halloween content, plus a wickedly cool interactive element.

HBO Max has already firmly cemented its place as one of the premier streaming networks. With its diverse catalog, ranging from blockbuster hits to a large selection of arthouse essentials — including an extensive Studio Ghibli and Criterion Collection offering — it’s at the very top of my go-to platforms when I’m looking for something great to watch.

But, with the launch of its “House of Halloween” spotlight page on Saturday, October 1, my love for this stellar streaming platform has grown exponentially.

House of Halloween brings an interactive Halloween experience to fans all month long. And even though we’re all rabid horror fans here, we know that Halloween goes beyond the horror genre. So, it’s appropriate that HBO Max’s spotlight page offers frights for all ages, including costume ideas, animated episodes, and more.

Last year, HBO Max had three doors to celebrate the season, labeled “Not Scary,” “Scary,” and “Very Scary,” which suggested a title to stream based on the door that was chosen.

This year, the House of Halloween ramps up the fun and the serious cool factor by featuring an interactive tarot card element to help fans pick their next title to stream. 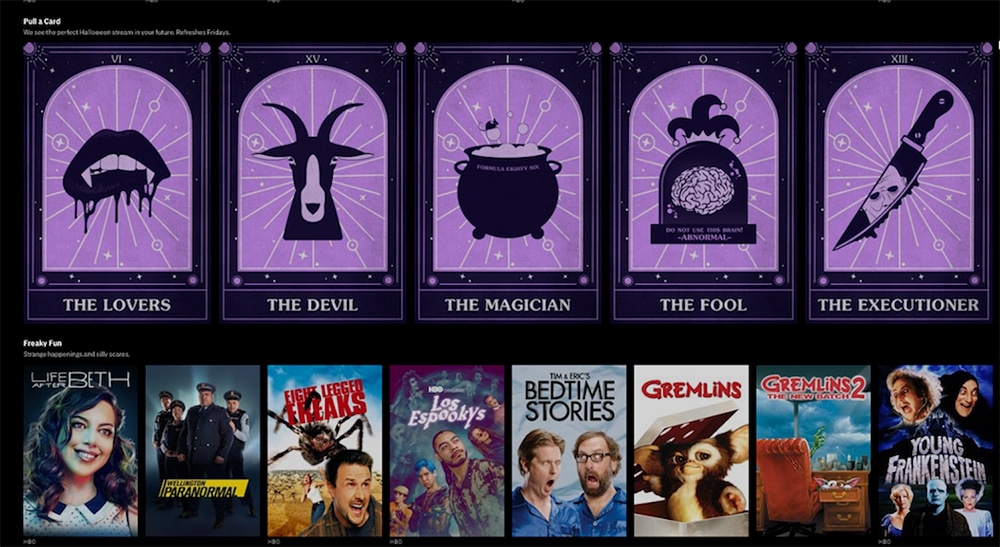 Fans can click on one of the tarot cards on the screen, which will lead to a recommended title based on the card. The tarot cards include:

The Magician reveals a surprise curated title related to fantasy/magic.

The Devil reveals a surprise curated title related to demons/possessions.

The Executioner reveals a surprise curated title related to slashers.

The Creature reveals to a surprise curated title related to creature features.

In addition to the tarot-based recommendations, fans can enjoy curated collections, including Spirit of the Season, Family-Friendly Frights, Scoobtober, Very Scary, Costume Ideas, and more.

Select Halloween episodes from series including South Park, Looney Tunes, The Middle, and Courage The Cowardly Dog will also be featured in the collections.

Below is a list of some of the titles available to stream on HBO Max’s “House of Halloween” spotlight page.

Lucy, The Daughter of the Devil