Filled with lots of Halloween pranks but little substance, “Trick or Treats” forgot to have a “bad guy” until it was too late to care. A man is locked up in the loony bin by his wife and vows revenge on her and her new lover on Halloween night! Let’s dig into 1982’s TRICK OR TREATS, directed by Gary Graver!

With all the Beistle decorations you can handle, it feels wrong for me to hate on a film that is set during the most wonderful time of the year.

But that’s just what I’m going to do.

When you throw out a cacophony of characters and scenarios in the first ten minutes, it’s impossible to follow or care, really. We finally settle down into the monotony of a slasher film that lacks the slasher.

The joy of a Halloween film is spoiled by the lack of a threatening presence, which doesn’t show up until way too late into the film.

The film is filled with tricks. 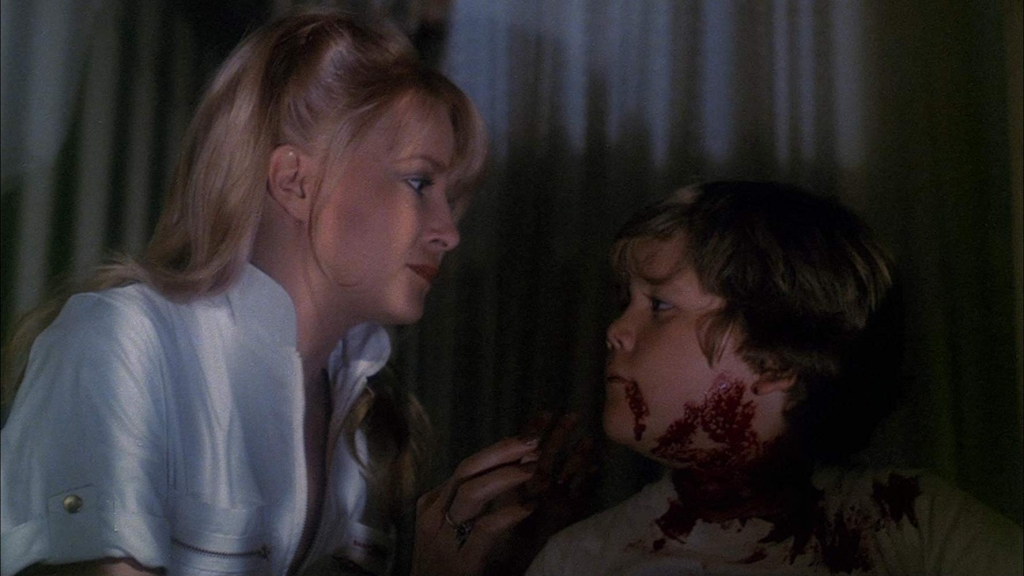 The young Christopher tortures his babysitter Linda with gag after gag. That’s it. That’s most of the movie. False threat after false threat.

And then, when the boy who cried wolf finally means it, we really don’t give a shit that Christopher’s Dad has escaped the mental institution and can’t remember what his double-crossing wife looks like as he cross-dressed his way through a couple of mistaken murders.

Halloween with no boogeyman, just a pain in the ass kid who wants candy and won’t stop playing tricks.

David Carradine (Richard) may be best known for Kill Bill and how he left Earth, but he was Frankenstein in Death Race 2000 and reignited an Anglo interest in Kung Fu as Caine.

Though he looks like a svelte Meatloaf, Peter Jason (Malcolm) is a well-established actor with tons of genre credits and was a John Carpenter regular, appearing in Prince of Darkness, They Live, In the Mouth of Madness, Village of the Damned, Escape from L.A., and Ghosts of Mars.

The late Paul Bartel (Bum) has a bit part, as he does in so many films. He’s got quite the resume: Death Race 2000, Piranha, Rock n’ Roll High School, Chopping Mall, Munchies, Gremlins 2… you get it. He’s entering genre hall of fame territory.

Steve Railsback (Bret) has a penchant for playing famous serial killers. He played Charles Manson in the TV mini-series based on the fictional account of the Tate-Labianca murders written by bullshit artist Vincent Bugliosi, Helter Skelter, and Ed Gein in the 2000 biopic. He also had a small part in Rob Zombie’s The Devil’s Rejects. The ending, which I will not give away, is as gratuitous as it comes.

Jaqueline Giroux plays the tortured babysitter well and makes you wish that little prick Christopher would just leave her alone and be nice, but there wouldn’t be a movie if he were.

A remake of a remake? The pranks and gags could go a long way. But like I said, there needs to be more to the movie than just that.

Itself being billed as a remake of Fright which holds the distinction of being suspected to be the first babysitter under attack film way back in 1971, it’s not surprising nothing more came of this “franchise” — though the original version seems to be more “horror” than this iteration.

Kino Lorber and Code Red put out a “Special Edition” Blu-Ray together that is lacking in the extras department but does have a “Katrina’s Bucket List Mode”. You can stream it on AMC+, Tubi, and Shudder.