“HELL COMES TO FROGTOWN” is a wild and audacious film that could have only been made in the 80s, but is thankfully making a welcome return to home video. 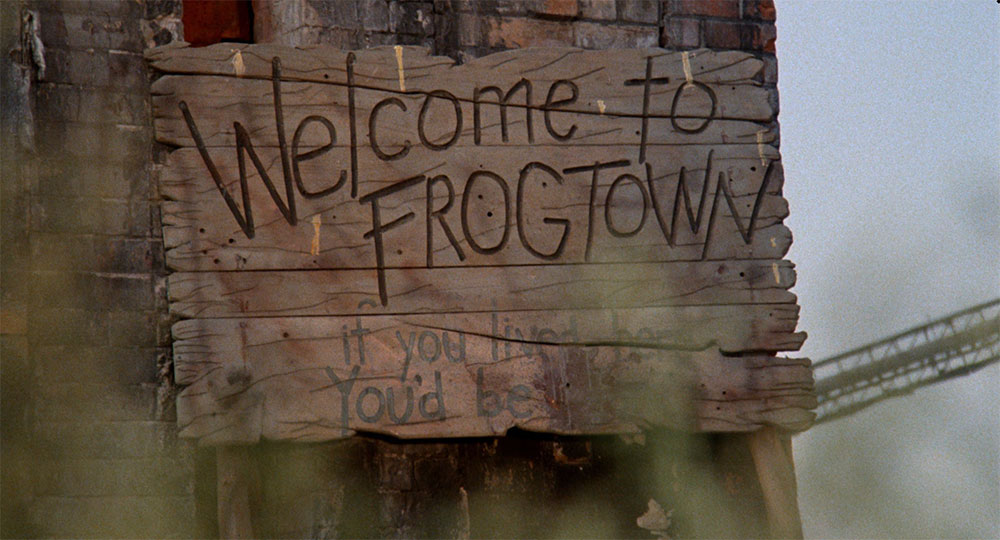 Only a label like Vinegar Syndrome could give a movie like this the restoration treatment and release it upon an eagerly waiting cult movie fanbase. 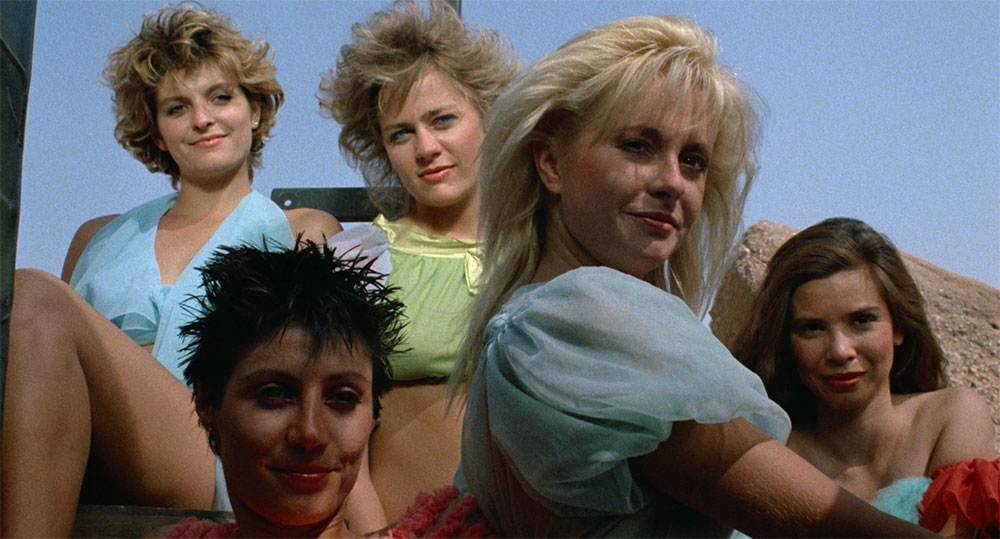 The world is pulling itself from the rubble of nuclear and biological warfare. The humans have begun to form a semblance of a government, led by women. There is a fragile peace with a mutant race of frog people. An additional byproduct of the wars is that most men are infertile. But a rash of unexpected pregnancies has led the government to track down and capture the nomadic survivor, Sam Hell (Roddy Piper).

Once captured, Hell is fitted with an electronic chastity/cod piece that will ensure that his virility is used whenever the government decides it’s needed. Hell is monitored and guarded by lead scientist Spangle (Sandahl Bergman). She ensures that Hell does not try to share his seed before it’s time. 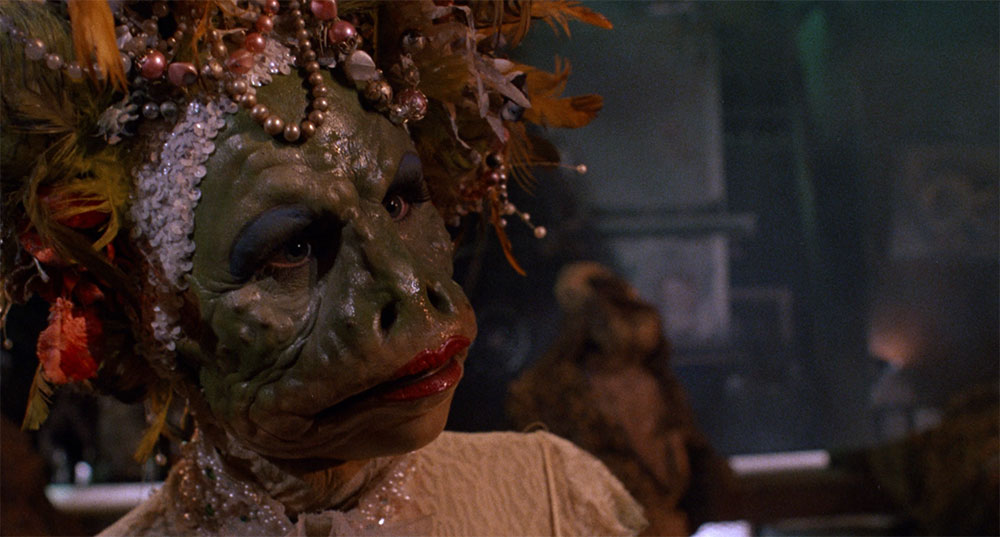 But to ensure that he’s always at the ready, she is there to excite him from time to time but will send an electric charge through his cod piece if things begin to get out of hand.

The human government learns that a group of virgin women are being held by the frog people in Frogtown. Hell has his first virility assignment: he and Spangle will head to Frogtown to rescue the virgins so that Hell can impregnate them to help repopulate humanity.

HELL COMES TO FROGTOWN is, despite all appearances, a decent and outrageous movie. 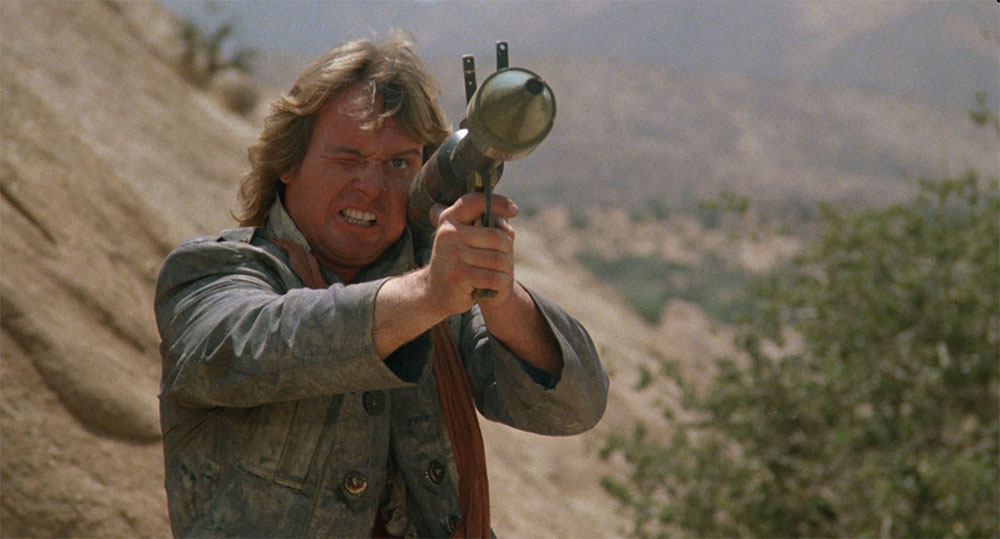 It’s obviously a parody of MAD MAX, and the actors involved are playing their parts very tongue-in-cheek with a wink and a nod to the audience.

The frog costumes by f/x artist Steve Wang are impressive and hold up well over time. Only one frog head for Commander Toty (Brian Frank) is fully animatronic, and the rest of the frogs are heads that are controlled by puppeteers. The costume design in HELL COMES TO FROGTOWN is comparable in quality to the costume design in TEENANGE MUTANT NINJA TURTLES that came out just a couple of years after FROGTOWN.

I’m surprised to find myself championing HELL COMES TO FROGTOWN, but I came to really love what this movie is when I caught on to what they were going for. 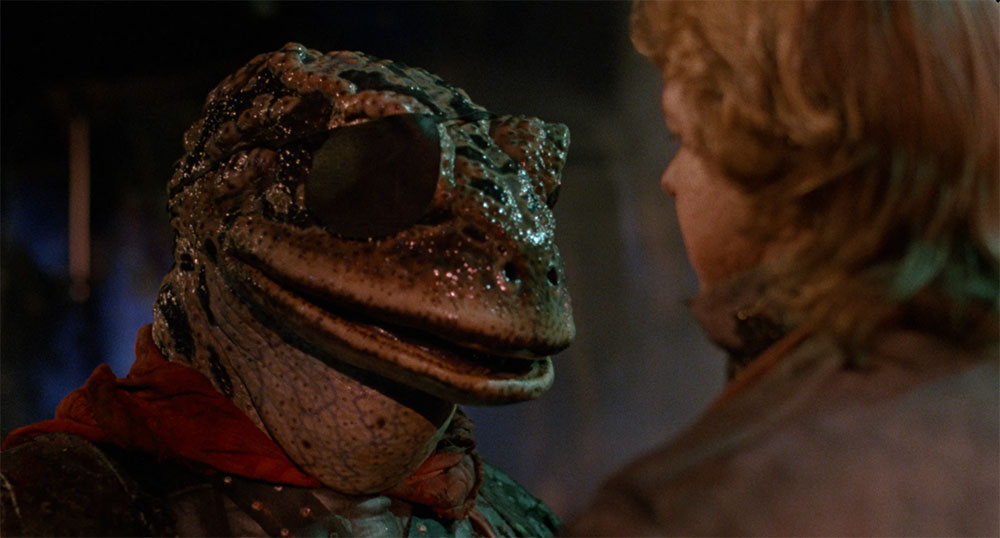 FROGTOWN is a wild and audacious film that shouldn’t work on any level, but it does in surprising and satisfying ways. HELL COMES TO FROGTOWN is a movie that could have only been made in the 1980s, and thanks to Vinegar Syndrome, we get to revisit this cult phenomenon in 2019.

Pro-tip: Don’t let anyone talk you into the “dance of the three snakes.” 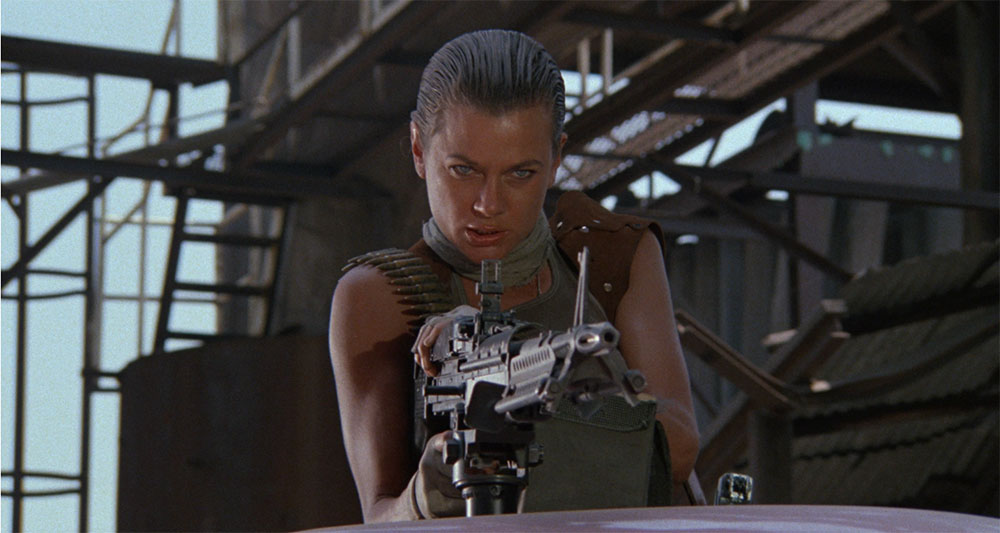 Vinegar Syndrome has packed this disc with a ton of great special features. The standout features are the video interviews with Randall Frakes and Roddy Piper. Both shoot from the hip and speak bluntly about their experiences making HELL COMES TO FROGTOWN. Frakes goes into great detail about issues encountered with a lawyer who wasn’t looking out for the creators’ best interests, the sequels, and a proposed deal with ABC to turn HELL COMES TO FROGTOWN into a television series.

The video interviews with actor Brian Frank and f/x artist Steve Wang are short (about 15 minutes each), but entertaining. Frank appears to be having a great time reminiscing about working with Sandahl Bergman and Roddy Piper, and even has some fond memories of working in the frog costume. Wang discusses the influences in creating the frog costumes and has some behind-the-scenes insights about working with Roddy Piper and production issues that came up when the budget went up due to New World Pictures coming on board to help finance the movie.

As usual for Vinegar Syndrome, the movie looks pristine. 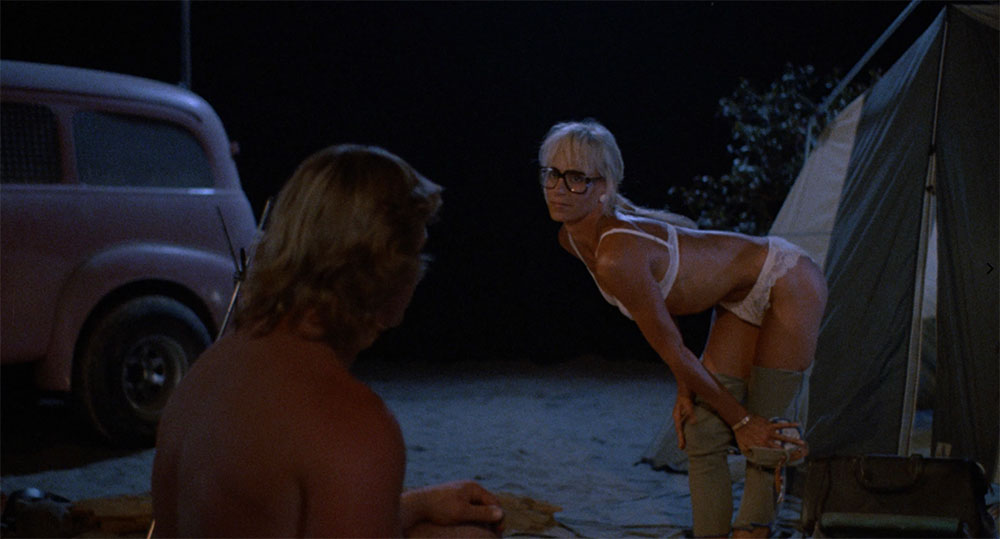 The remaster and restoration allow the frogmen design to stand out, especially on Commander Toty. Check out the extended scene in the special features for an example of the quality of the picture before the restoration.

The audio commentary with director Donald G. Jackson and Randall Frakes goes into greater detail about the making of the movie, and like the Frakes video interview, goes in-depth about the background and origin of the movie, working with Roddy Piper in his first movie role, as well as how they lost future rights to the movie (sequels, productions, etc.). The two men seem to get along well, and the track is easy to listen to because it sounds like two long-time friends having a pleasant conversation. 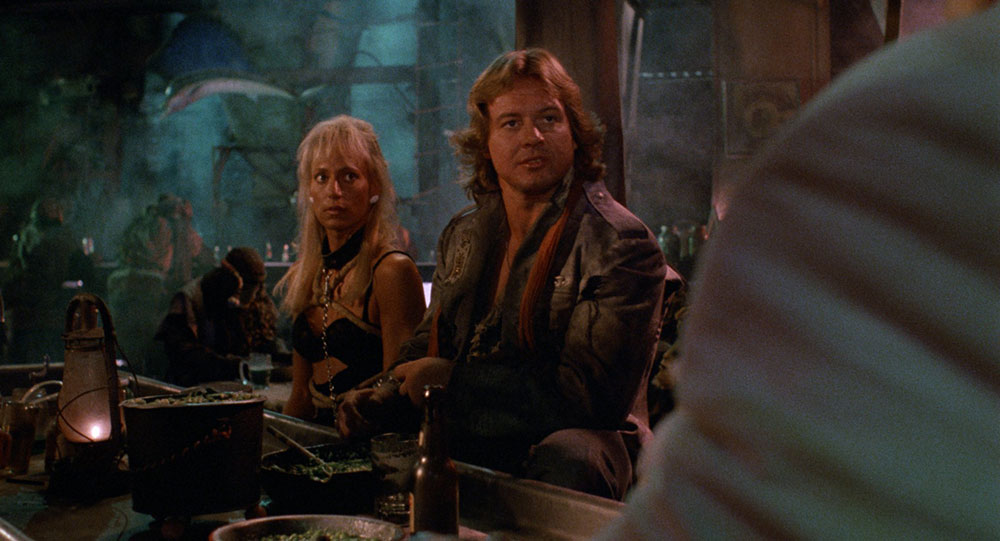 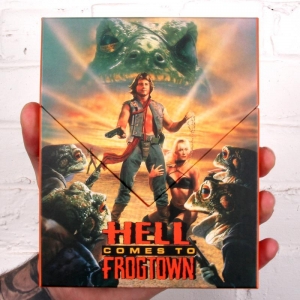