Inspired by the real life horrors of the past and present, “Await Further Instructions” is an expertly crafted, exceedingly chilling morality tale.

In July 1961, a Yale University psychologist named Stanley Milgram began a series of controversial experiments to test subjects’ blind obedience to authority figures. The Milgram experiment, as it was called, measured the willingness of study participants to obey a perceived authority figure at all costs — even if it meant committing acts of brutality in direct conflict with their own moral code.

Gathered together for the holidays, tensions flare and family members begin to crack under the pressure cooker — even before they find themselves trapped in their suburban home, at the mercy of a mysterious and unseen “authority” who chooses to communicate exclusively through their television. 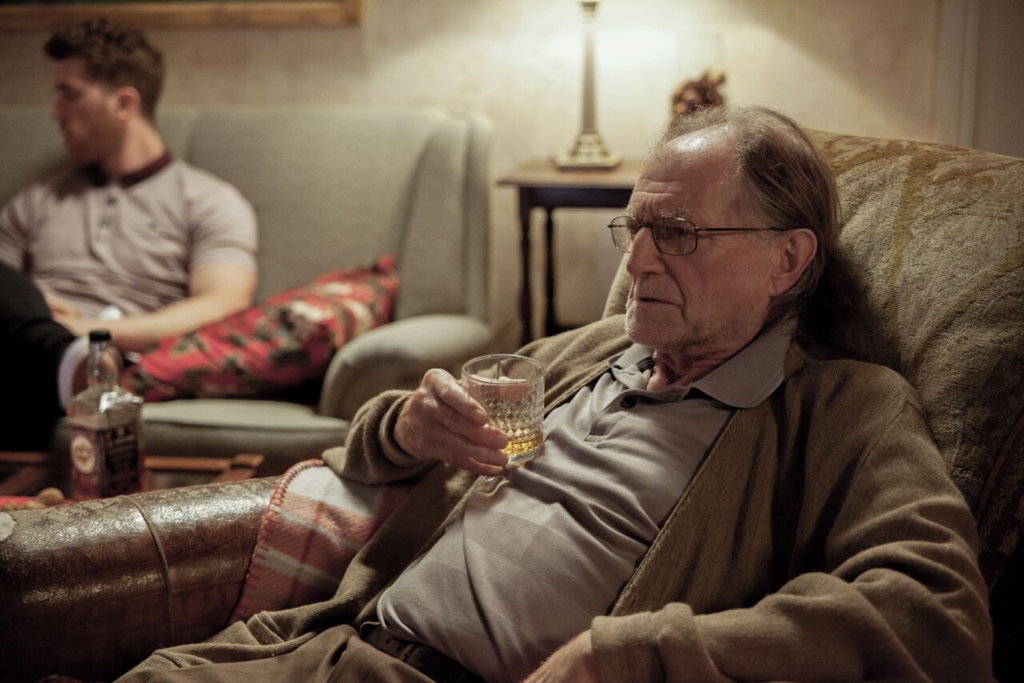 Prodigal son Nick (Sam Gittins) returns home from Christmas after several years away due to a strained relationship with his domineering father Tony (Grant Masters). By his side is his progressive British-Indian girlfriend Annji (Neerja Naik), who instantly clashes with Nick’s cruel and openly racist grandfather (David Bradley) and his very pregnant, less overtly but equally intolerant sister Kate (Holly Weston).

Nick’s mom, Beth (Abigail Cruttenden) is kind and well-intentioned, but she has little influence over her autocratic husband, a deeply religious man who believes in the ultimate authority of the patriarch. The other head-of-household is Kate’s husband Scott (Kris Saddler), a weak-willed man lacking much desire or ability to think on his own.

Fed up with family drama, Nick and Annji wake up on Christmas morning planning to  make a quick exit. But when they open the door to leave, they discover the home is surrounded by an impenetrable black metal. 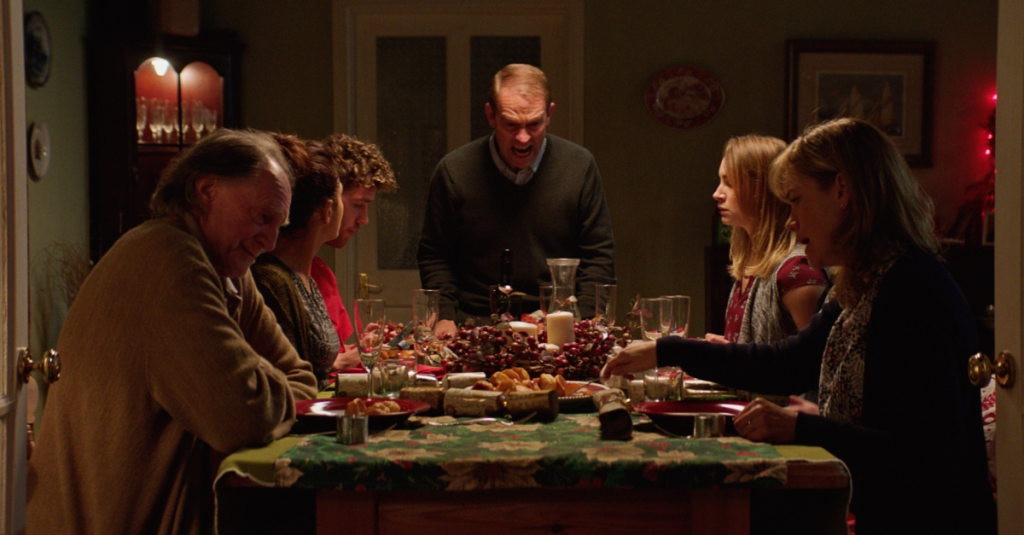 In absurdist fashion, Tony insists the family carry on as if nothing strange is happening. So they begrudgingly sit down at the dining room table to eat Christmas dinner, and the father leads them in a prayer that includes a reminder not to question God’s mysterious plan. Just then, another mystifying authority figure reveals its cryptic plan to the family via the television set — an order to throw out all the food in the house — which is obeyed without question (despite protests from Nick and Annji).

As the inscrutable and increasingly menacing orders continue, tensions escalate, as does the violence and horror of the situation. However, even as it becomes increasingly clear that the “voice” of the television is more foe than friend, some in the group remain steadfast in their willingness to obey at all cost. 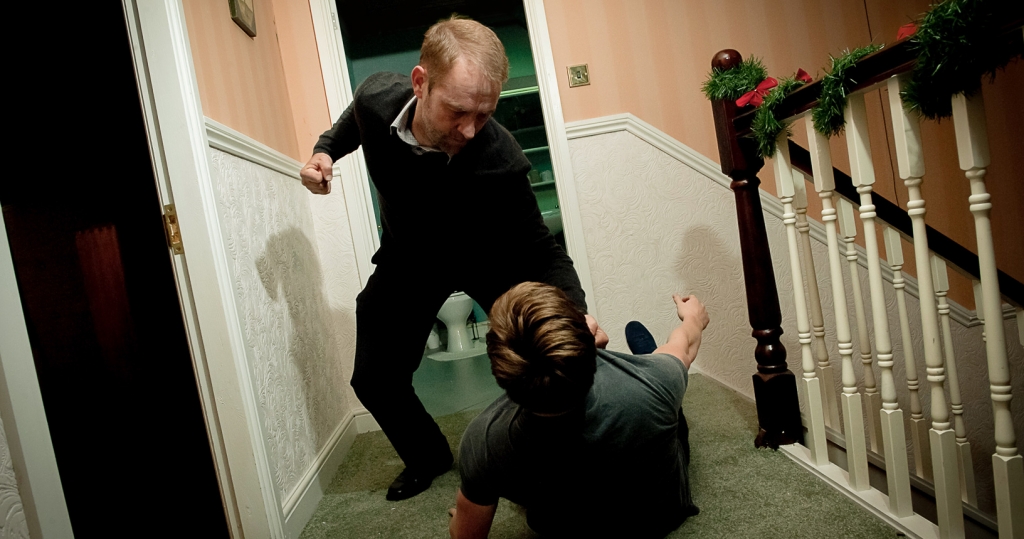 Kevorkian masterfully ramps up the tension and threat level incrementally, giving the audience ample time to invest in the film’s characters — feeling genuine shock and fear as the chaos builds to an explosive finale.

While the film demands some patience of its audience during the setup of the important family dynamic and the slow reveal of what’s really behind the twisted social experiment, that patience pays off in dividends during the Cronenberg-inspired final act. It’s here we get to revel in some impressive visual effects, a heavy dose of satisfyingly horrific body horror, and the merciless denial of any happy ending for the members of this fractured family. 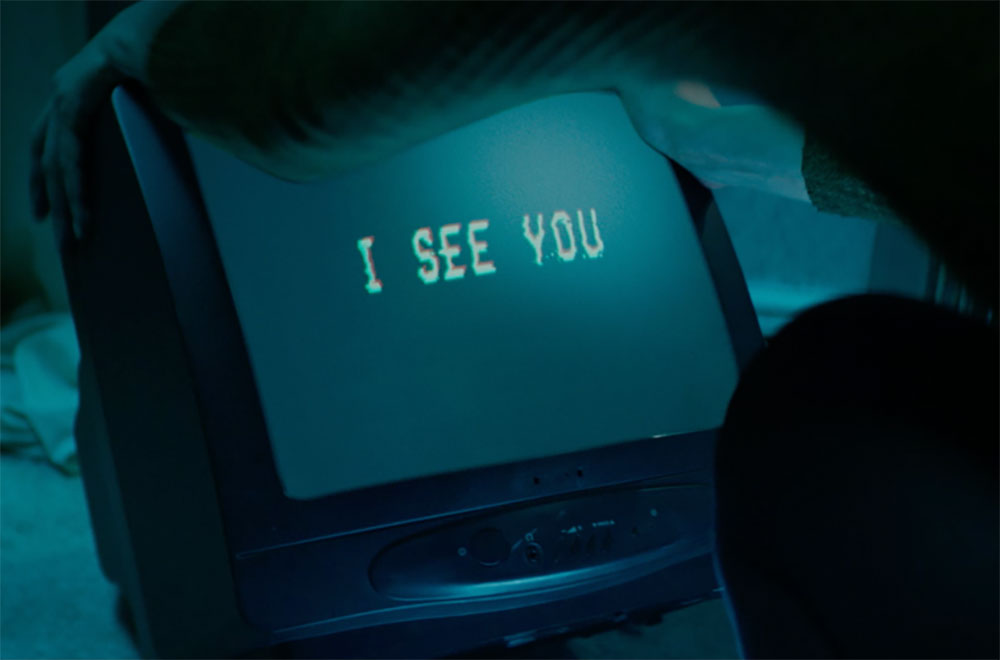 To be fair though, as effectively creepy and disturbing as the ending is, it pales in comparison to the chilling psychological horror explored during the rest of the film. The Milgram experiment was so upsetting, not just because it revealed a human tendency to trust authority over our inherent sense of morality or justice, but because we’ve seen the unspeakable real world consequences of a blind allegiance to a corrupt authority.

In fact, Milgram began his experiments in an effort to understand the psychology that led to the Holocaust — and determine how much moral accountability men had who were “just following orders”. Most importantly, if the unimaginable happened once, could it happen again? That brings us to the heart of the matter…and the reason this dark morality tale makes such a strong impression. 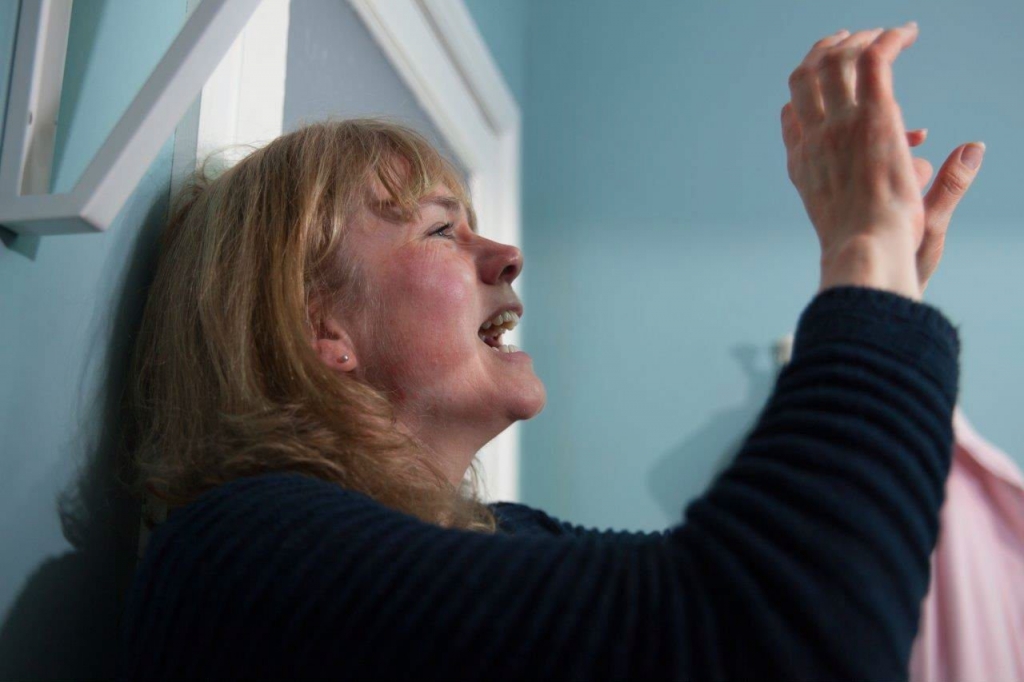 What’s truly terrifying about Await Further Instructions is just how timely and relevant it all feels.

In fact, at its core, the film is a dismal diagnostic on modern society. Depressing on multiple levels, it’s a scathing indictment on the current politics of intolerance and division, xenophobia and fear of ‘other’, the manipulation of faith in pursuit of power, a toxic patriarchy, our unhealthy addiction to technology, and the undeniable influence of the media.

Be sure to add this this deeply unsettling and blistering examination of the human condition to your holiday watch list. I promise it’s sure to make you feel much better about your own seasonal stress and dysfunctional family gatherings.

Await Further Instructions  made its world premiere at Cinepocalypse 2018 and is now available (as of December 11, 2018) on VOD and Blu Ray from Dark Sky Films.