Studio meddling and cranky critics won’t bring “Black Christmas” down, since the splatter quotient is high and the holiday love is hilariously misanthropic.

You won’t find any hate or complaints about this film here, only a cheerful and lighthearted celebration of its many twisted, murderous charms.

This is a very gratifying thing for me: to have my review for the remake of Black Christmas be posted on the night of my yearly rewatch. I want to be honest and upfront with you, dear holiday reader: I love this movie to death!  I don’t care if that makes you angry, or if that robs me of any of my indie horror cred. It is by no means a genre-defining classic, but it’s my personal favorite Christmas horror movie.

For some reason I hesitate to call Krampus a horror movie.  If we’re going to go down that row of Christmas lights, I would prefer to put Krampus into a dark fantasy category.

The Black Christmas remake is a beloved classic to me for some very basic horror reasons: there is morbid melodrama, tasteless cruelty, and inventive gore, all of which revolve around attractive college girls.

One of the things that makes it even more delightful is the fact that they are quite clever. As far as quips and bitchy snark go, anyway. I have read criticism that they aren’t well-defined characters. What? They’re murder meat, people! This is a slasher movie!

The point here isn’t “I can’t wait to see Mary Elizabeth Winstead’s performance”, it’s “I can’t wait to see how she dies.” Sorry if that sounds cynical, but that’s my truth. It’s a vibrant, mean-spirited, modern, and mindless horror movie. And for those reasons it is nothing short of perfection.

And even beyond that, it functions wonderfully as a Christmas movie. Especially for a Christmas hater like me. The few things that appeal to me about the holiday (the snow, the colors, the decorations, and the lights) are all present in Black Christmas, and in abundance. Production designer Mark Freeborn and art director Tony Wuhlgemuth captured the visual essence of Christmas in a jar of sparkling red and green water.

There is more to obnoxious and tacky holiday decorating than just throwing some decorations around, and it’s gloriously clear that they understand that. When it comes to Christmas lights and tinsel, there is no such thing as overkill. Not when there are so many things to kill with them.

The sorority home is covered in large-bulb strings of lights, like a gingerbread house detailed with a fractured and fading neon rainbow. More than a few hollow plastic effigies, lit brightly from empty middles, loom in shapes both Biblical and Coca Cola-flavored.

Some of the tastiest and hardest-hitting violence comes from the killer’s origin / flashback scenes, yet another thing those who claim to know better complain about.  There is a beating with a rolling pin that I am very fond of, with the cooking instrument coming down on its victim again and again until pieces are heard breaking off. Bliss! The “Christmas cookies” are a disgusting and gratuitous little detail, especially the milk-dunking and closeup chewing.

Black Christmas 2006 is a loving gift for the fans of cinematic eyeball trauma as well. This too was a complaint I encountered more than once. Have they never seen horror movies before? Since the first time I saw it, I have never eaten a candy cane the same way again. I always make a sharp and pointy end.

I think part of the reason why this was so poorly received isn’t because it was of inferior quality, but because a lot of people weren’t used to such a charged-up level of violence and brutality. The “final girl” was also an unexpected cast member, which was a little curve ball I enjoyed not being able to catch at first. Plus, we get the standard horror movie requirement of having to viciously kill the murderer twice. 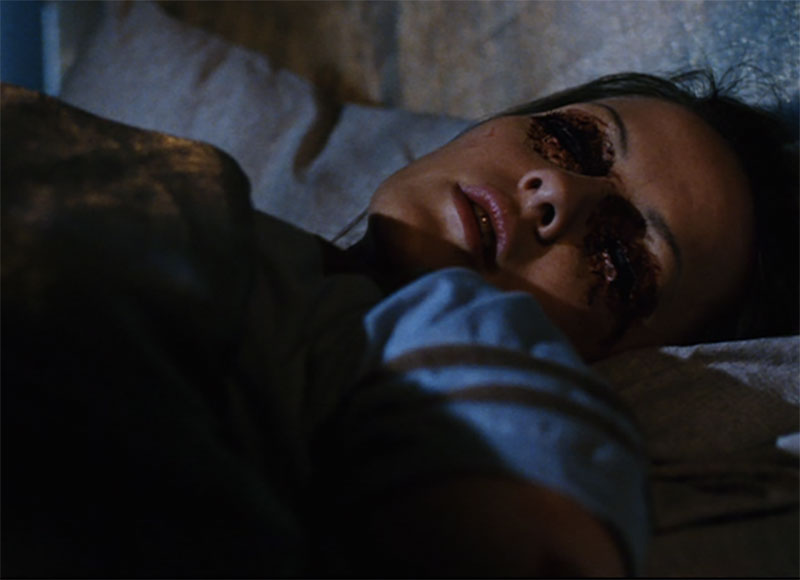 My final conclusion is that this was way too rough for the ‘tweens and mallrats, and not “different” enough to satisfy the horror academics. I don’t want to name all the gruesome deaths and delightful little perks of seeing a death-by-ice-skate-blade . . .oops . .. but I enthusiastically encourage you to ignore the malice of haters and shit-talkers and give this movie a try. Or even try it again.

It is a beautiful-looking movie full of holiday warmth, blood, and vinegar. I can’t wait to watch it later on tonight.