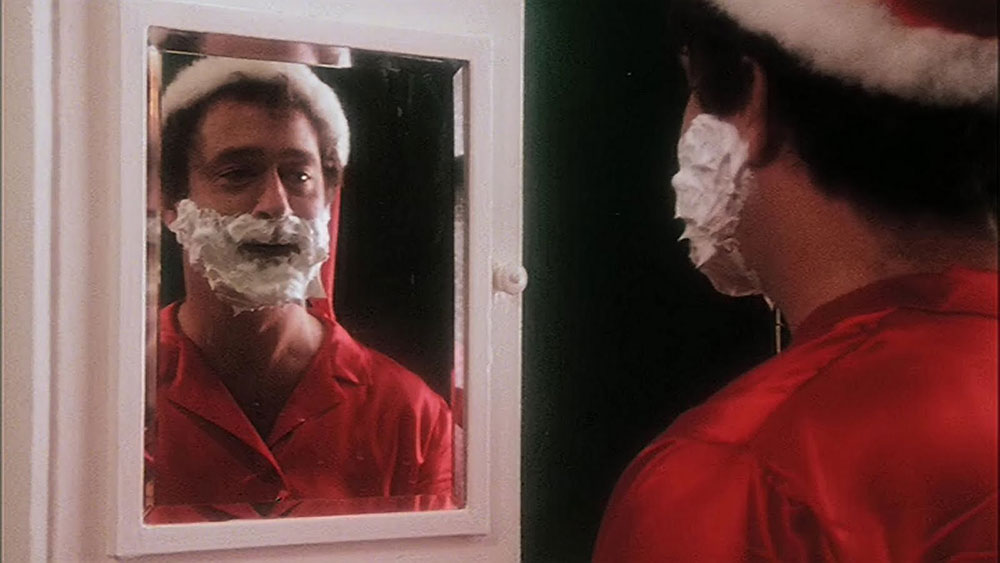 If you have ever been in the mood for a feel-good, killer Santa Christmas movie, look no further than this obscure 80s slasher.

Christmas Evil has seen a slow but steady increase in popularity over the past several years. It gained a lot of attention when it was released by Troma in December 2000.  Severin released a special edition DVD in 2006 with a John Waters commentary. Waters has always been very vocal in his support and appreciation of the film, and the commentary he shares with the director (Lewis Jackson) is enthusiastic and informative. Any opportunity to listen to John Waters talk about movies is an opportunity I highly recommend you take.

Then in 2014, Vinegar Syndrome, one of the most respected horror and exploitation restoration labels, released the film on Blu-ray. All extras from the previous versions were carried over, which makes the Vin Syn version the final word on the film. 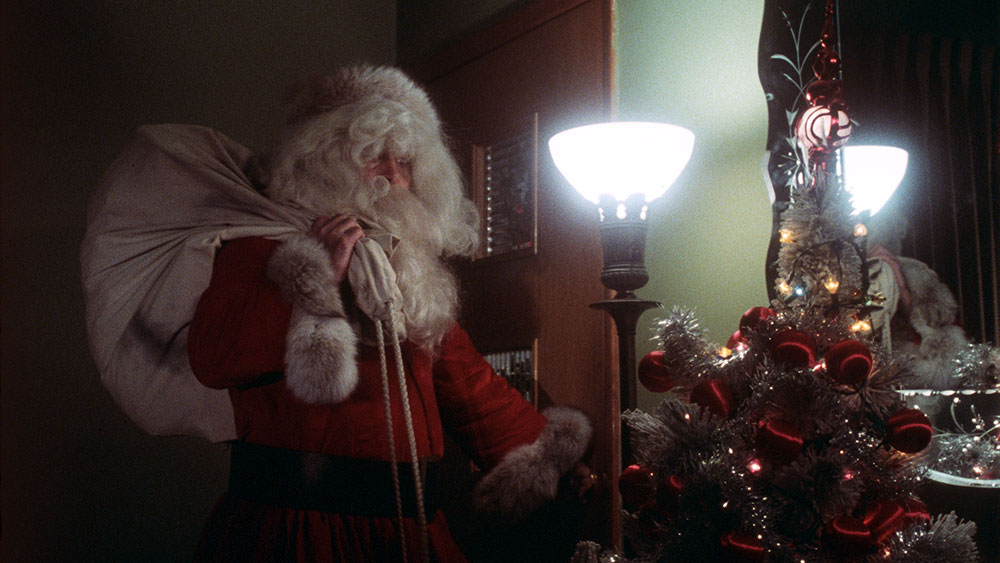 The title card even features the original name of the movie (You Better Watch Out). The official name, Christmas Evil, makes absolutely no sense. There is nothing even the slightest bit “evil” about this movie. Insane, but certainly not evil.

We begin in 1947 suburban New Jersey. Little boy Harry sees his mother being naughty with Santa (really his father, who moments earlier pretended to be Santa for Harry and his brother). But poor Harry is a little too young to understand what is going on, and his grand visions and dreams of Christmas are shattered. This destroys his sanity and traumatizes him. Yes, Harry is an extremely sensitive person.

33 years later, Harry exists in a perpetual man-child bachelor’s world of Christmas. He sleeps in Santa Claus jammies, has his apartment decorated with every Christmas / Santa Claus adornment imaginable, and works at the Jolly Dreams toy factory (Christmas Evil / You Better Watch Out is produced by Edward R. Pressman, owner of Pressman Toys, and he was delighted to feature his toy factory as one of the primary locations in the film). 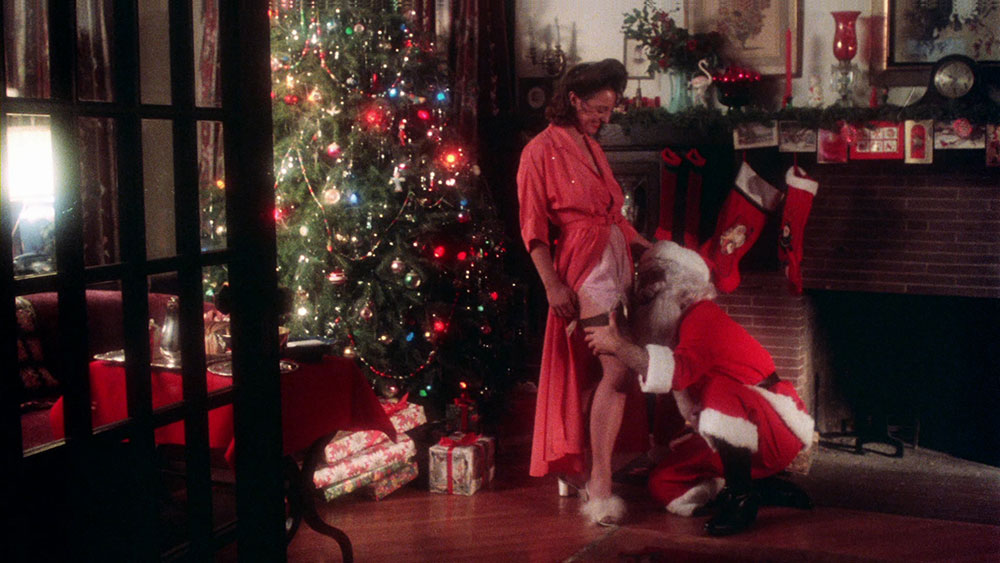 He even keeps an eye on the neighborhood children, and has giant “naughty” and “nice” books. Nice children take out the garbage for their mothers, and naughty children look at the Deborah Harry issue of Penthouse Magazine. Within the context of the movie, this stalking is not perverted or problematic behavior in any way: part of the magic in the movie is how oddly innocent and cheerful it is.

Harry’s co-workers all look down on him and make fun of him when he isn’t around – or so they think.  Harry hears everything, just like Santa Claus does. During the yearly Jolly Dreams Christmas party, the owners of the toy factory announce they are going to donate toys to the children of a local hospital, but their motivations are shady and don’t impress Harry at all.

At home, Harry creates a very authentic Santa Claus suit and cackles gleefully when he glues a white beard to his face and it doesn’t come off. Once he is finished putting on his Santa suit, he wanders into the Christmas Eve night, peeking in windows, looking for incidents of naughtiness and niceness. It is obvious by this point that Harry has completely lost his grip on reality, and believes he is Santa Claus. 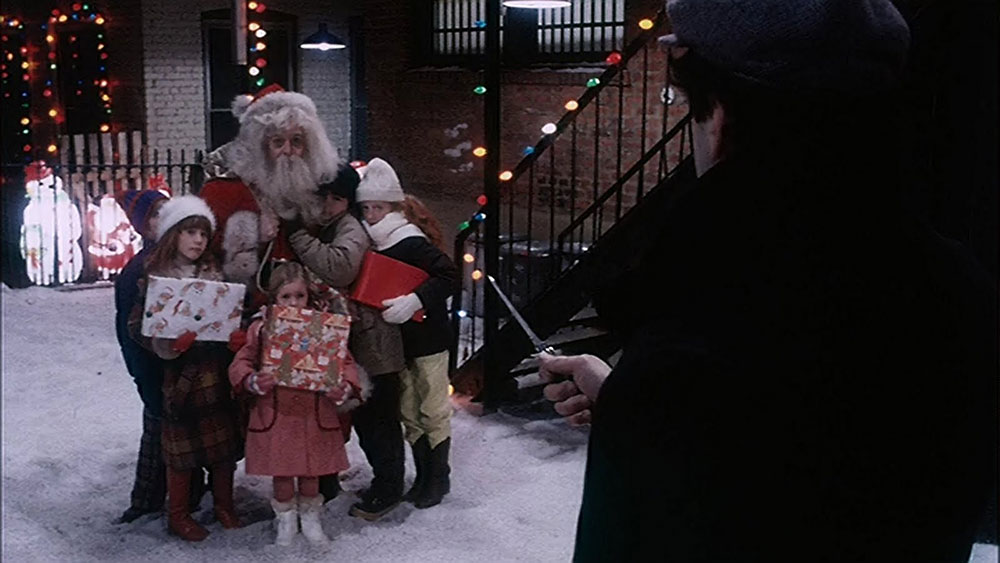 Two revelers at a downtown Christmas party spot him as he roams the streets with a glazed, maniacal look in his eyes, but they are too drunk to pick up on his obvious unstable nature. They drag him into their party. He is clueless as to what is going on and just stares. After some nervous encouragement to be Santa for the little girls and boys, he snaps out of it and becomes the best, and most jolly Santa any of them ever saw.

He dances with everyone and hands out presents (from a huge sack of toys he stole from Jolly Dreams). But Santa has a busy night ahead of him, right? He can’t stay for too long. But before he leaves, he becomes frighteningly dire and serious and warns the children to be good and learn a lot in school, or next year Santa will bring them “something horrible.”

Hilarious, and fucking beautiful. The mood in Christmas Evil is lightning in a bottle. 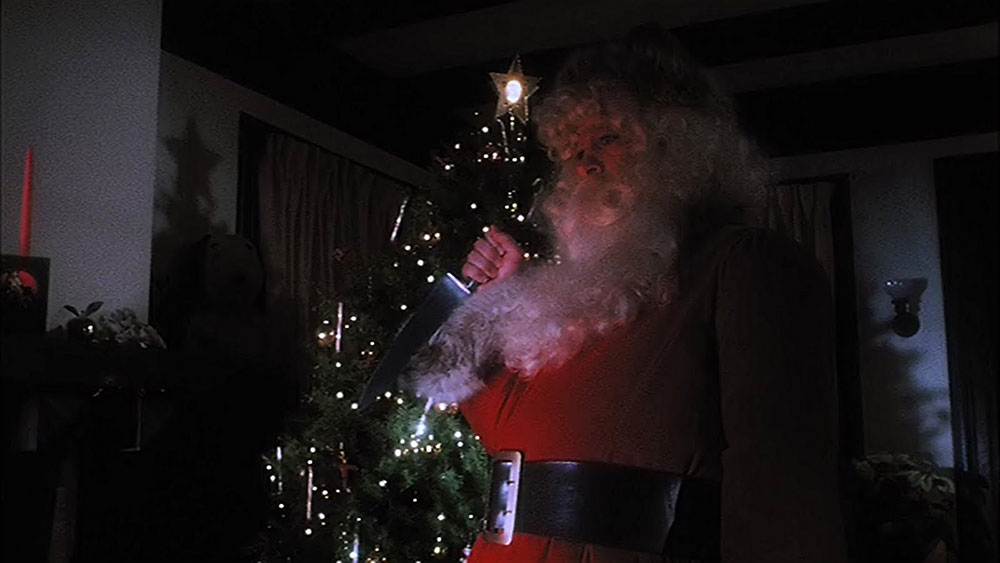 He continues the trip around town in his beat-up old van, which he decorated with a painting of Santa Claus. He delivers toys to the hospital, making sure every child gets one. As he continues his adventure, he inflicts eye trauma with a toy soldier and hacks up several people who make fun of him.

By this point two bumbling police detectives are on the case, but the best they can do is a lineup with a bunch of guys dressed like Santa Claus. The local news reports the rampaging Santa, and the sweet little town he is in turns into a kingdom of mindless vigilantes.

Eventually a group catch up to Santa / Harry, but before they knife him to death in an alleyway, their children rally around him as protection. It’s a heartwarming scene, and poor dazed delusional homicidal Harry is delighted by what the children are doing.  To make things even better, one of the little girls takes a knife from her father and gives it to Santa, saying it’s a Christmas present. 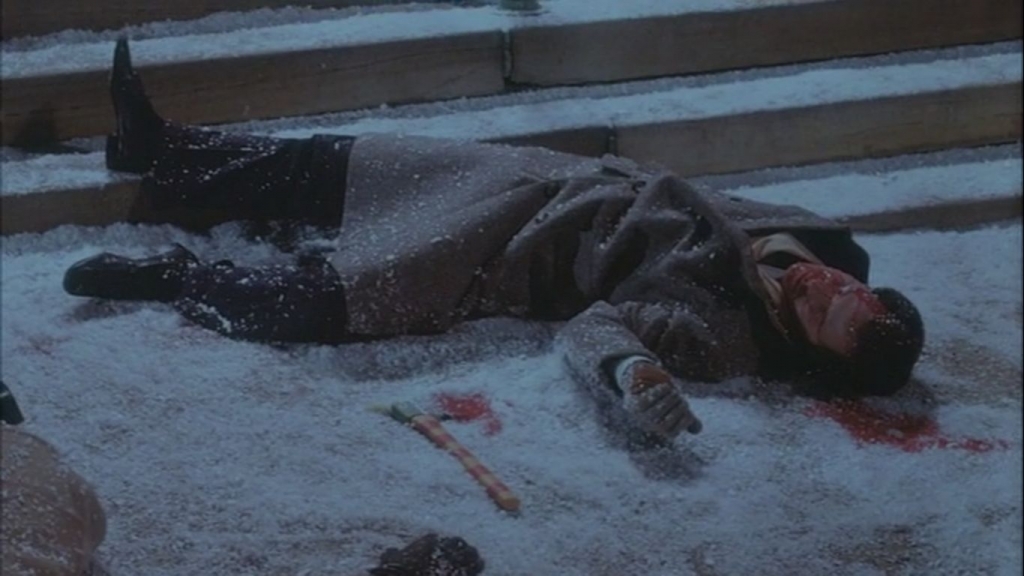 Lynch mobs continue to assemble and light torches, so Santa / Harry gets in his Santa-van to escape them.  But it’s no use, since the only option he has left