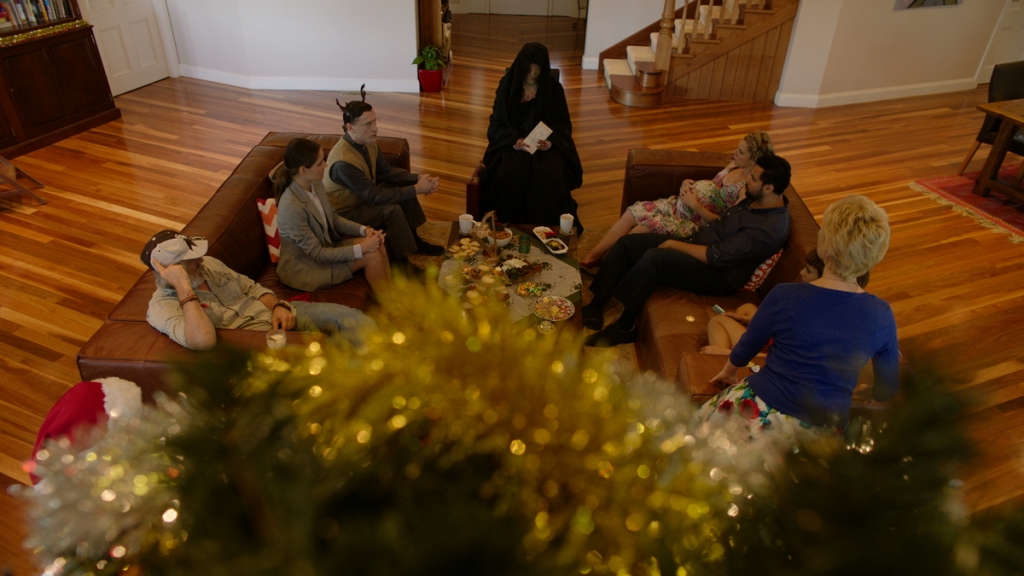 “And Darkness and Decay and the Red Death held illimitable dominion over all.” ~Edgar Allen Poe

Not content to dip into the overused horror trope of a killer in a Santa suit, Anderson lets viewers know immediately this is a Christmas horror film unlike any we’ve seen before. You may think that is a hyperbolic statement, but when a Christmas-themed film, even in the horror genre, starts out with a protest of an abortion clinic and a bombing of said clinic, you know you are in for something unique and unsettling. 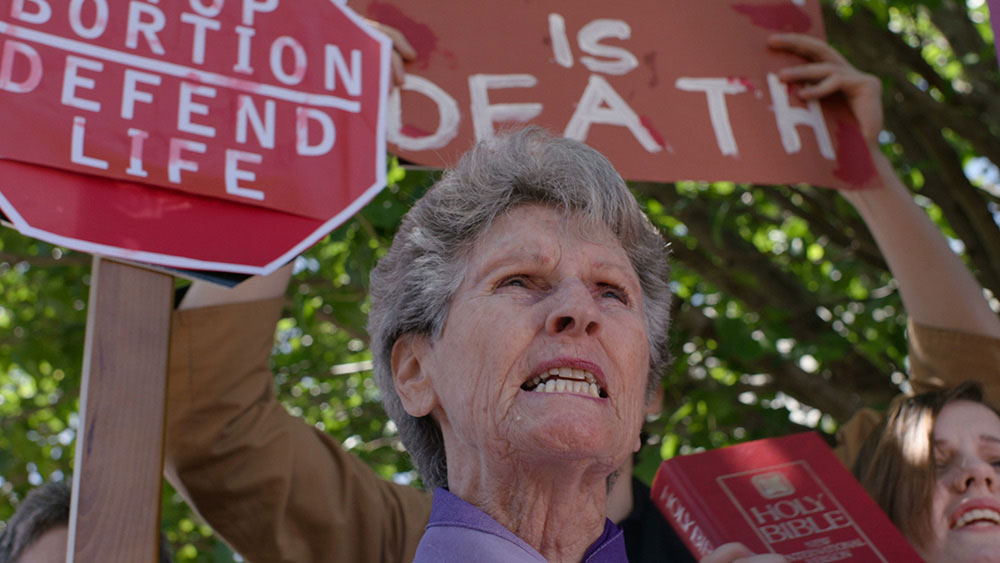 RED CHRISTMAS begins at an abortion clinic. As a woman is going through with the procedure, and the fetus is discarded into a medical waste canister, an explosion goes off in the building. Chaos ensues, the operating room is quickly emptied of the doctors, nurses, and woman having the procedure. The bomber walks calmly through the halls as the workers at the clinic make their escape.

Entering the operating room, the bomber sees that the fetus has somehow survived as a bloody mangled hand reaches out from the medical waste container. The bomber, a religious zealot, nurses and raises the child. As shown through quick scenes during the opening credits, the bomber passes on his own zealotry to his adopted child.

When the opening credits end, RED CHRISTMAS introduces a large family gathering together for Christmas at an isolated Australian estate.  The matriarch of the family is Diane (Dee Wallace), a widower who is celebrating the last Christmas at the family home before selling it off and enjoying her life away from family and memories of her deceased husband. Diane’s two daughters are at odds with each other and Diane over her plans with the family home. 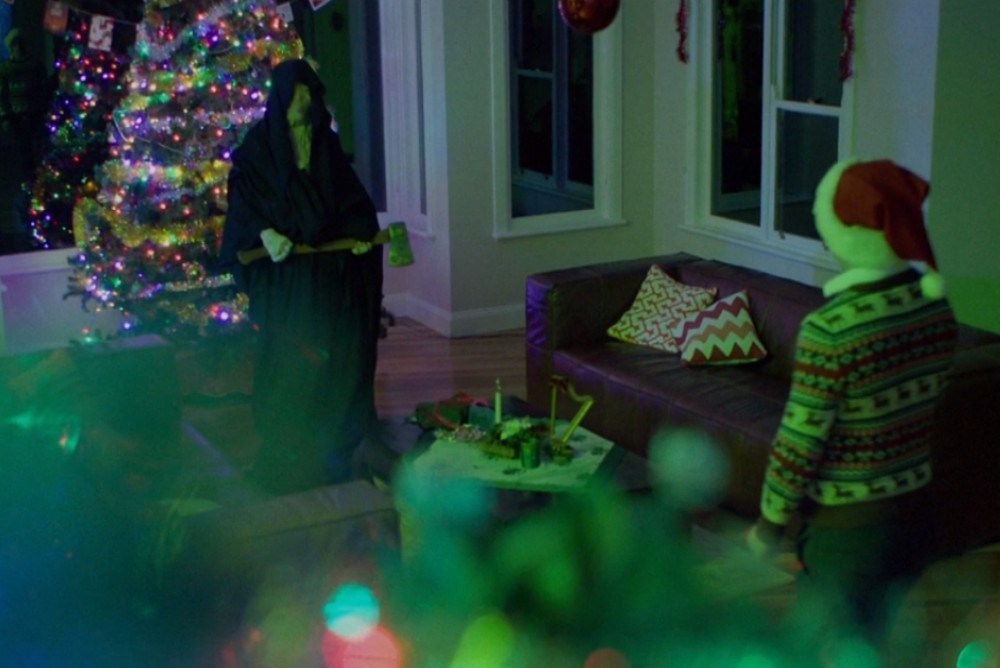 Diane also has a son, Jerry (Gerard Odwyer), who has Down syndrome, and who is supportive of her. Her boyfriend, Joe (Geoff Morrell), avoids confrontation and just wants to have a fun Christmas Day.

As Diane struggles to keep the family from fighting on Christmas morning, a stranger knocks on their front door.  Cloaked in a black robe and his body wrapped in bandages, the stranger introduces himself as Cletus and carries a letter for his mother. Diane invites Cletus into the house, and his arrival is reminiscent of the figure of Death in THE MASQUE OF THE RED DEATH.

Cletus joins the family and begins to read his letter aloud. It quickly becomes clear that his mother is Diane, and Cletus is looking for a reason why she attempted to abort him. As the family realizes what has been revealed, more strain is heaped upon them. Unlike many Christmas movies, there will be no healing, happy family moment.  The men in the house expel Cletus. Embarrassed and angry, Cletus seethes alone until he returns to seek out his vengeance with bloody death. 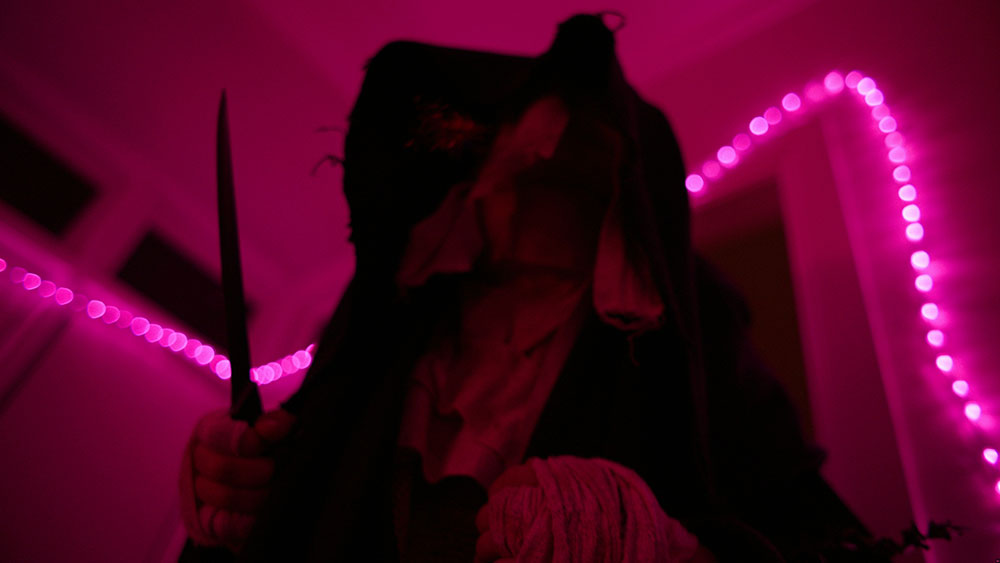 Anderson’s RED CHRISTMAS straddles the line between pro-choice and pro-life, while clearly showing the ultra-conservative zealots as living in hate and violence while preaching that they come from a place of love.

The first half of the movie focuses on the cost of a mother’s decision on her children and herself, clearly showing the splinters in a family relationship caused not just by past decisions but by hiding those decisions from the entire family. The second half, after Cletus has been rejected by the family, is a goretastic, violent, exploitation film.

Anderson lets the blood flow with a bevy of inventive and splatter heavy kills. After Cletus cuts most of the power to the house, the scenes in and around the house are mostly lit in the red and greens of Christmas lights, giving the shocking death scenes a macabre almost giallo-like lighting.

The bond that holds RED CHRISTMAS together is the performance of Dee Wallace. She plays a loving mother, exasperated parent, angry matriarch, and defender of all she loves and holds dear. Her scenes with Gerard Odwyer, where Diane tries to explain to Jerry why she had an abortion, are heartbreaking. Wallace’s performance elevates RED CHRISTMAS to something more than just an average ozploitation film, and her work in this movie confirms what fans already know, Dee Wallace is a legendary genre actress.

RED CHRISTMAS brings no holiday cheer, even if Anderson attempts to insert some black humor into the movie. The humor doesn’t mesh well within the context of the movie. If you’re hoping for a happy holiday ending you won’t get it here, because RED CHRISTMAS has a shockingly depressing ending. But the inevitable end to Diane and her family’s story is earned, and feels like the only way their story could conclude.

You can read our other reviews of RED CHRISTMAS, from our Editor-In-Chief Stephanie and writer Vicki Woods, at these links: