In honor of its anniversary, we celebrate the undeniable influence and enduring legacy of a beloved horror classic, “Friday the 13th”. 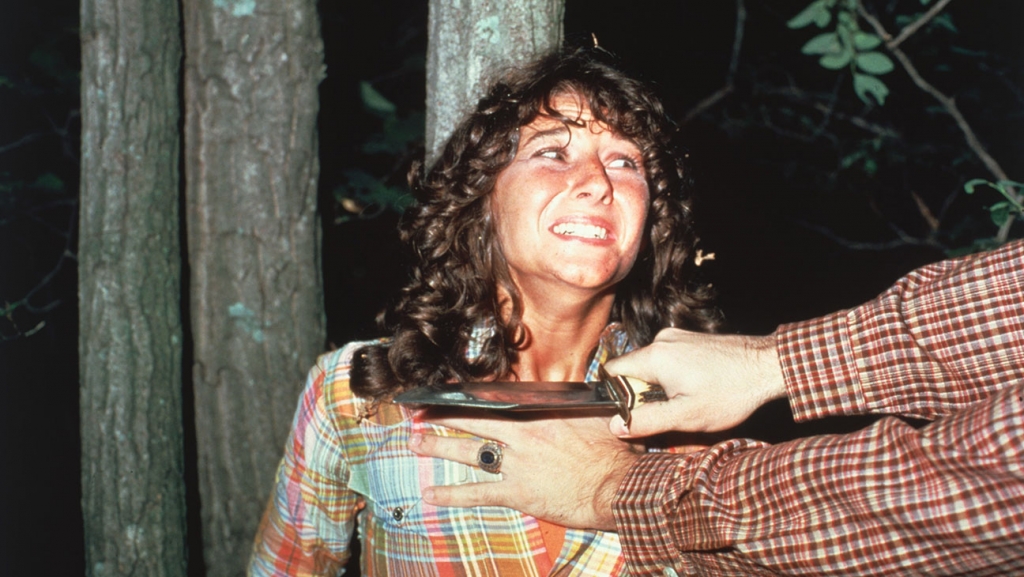 Friday the 13th is one of the most successful slasher movies of all time. It introduced a horror icon in Jason Voorhees, who would be resurrected in 12 movies, video games, comics, and tons of merch.

Filming took place in New Jersey at Camp No Be Bo Sco (North Bergen Boy Scouts) which hosts Crystal Lake Tours for Friday the 13th fans. Tours feature occasional visits from cast members, including special effects and makeup artist, Tom Savini. Other locations featured in the movie (not on the tour) include the Moravian Cemetery and Hope Junction Antiques in Hope, N.J. — two places camp cook Annie (Robbi Morgan) stops on her way to Crystal Lake — as well as the Blairstown Diner in Blairstown, N.J.

Sean S. Cunningham produced and directed the film, and Victor Miller wrote the original screenplay which tells the blood-soaked story of Camp Crystal Lake, called “Camp Blood” by the locals.

The story goes as follows. During the ‘50s, several camp counselors were viciously murdered there, causing the camp to subsequently be shut down. Years after the horrific tragedy, a new group of counselors journey to the infamous landmark to finally reopen the camp. But before any kids can arrive to make macaroni necklaces and wade in the waters of Crystal Lake, each of the unfortunate teen counselors is picked off one by one, in a brutal fashion, by an unseen assailant.

It’s not until the film’s shocking finale that the killer is finally revealed and Friday the 13th brilliantly separates itself from other slasher films of the day. 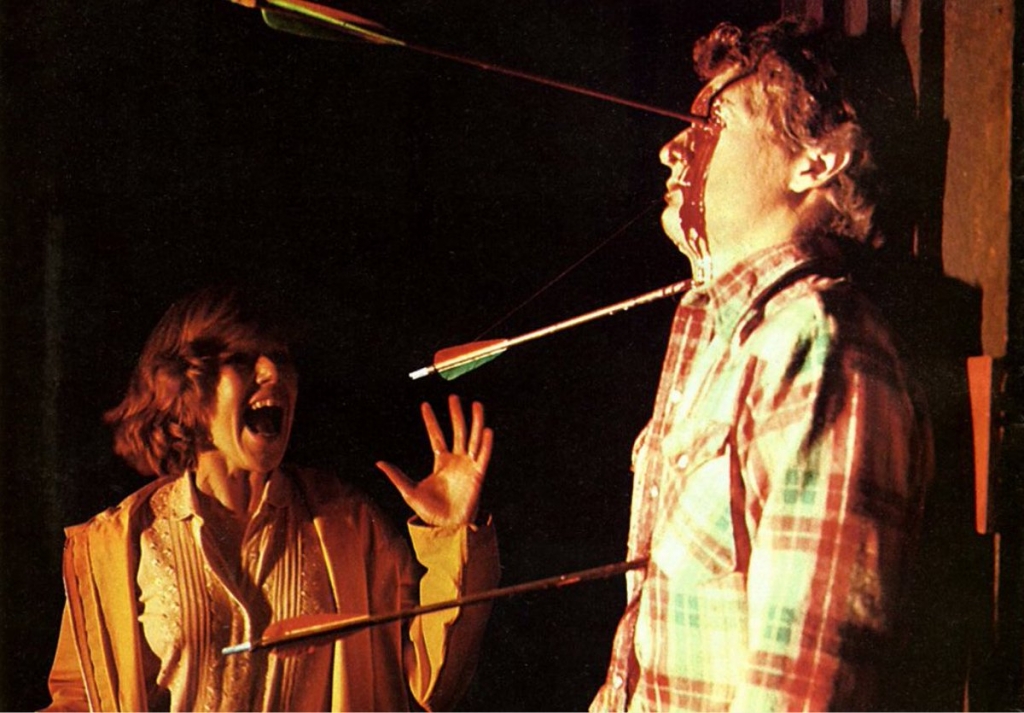 In fact, it ultimately reveals itself to be much more than a slasher and transforms into a tale about a mother’s love and her desire for twisted, gruesome revenge.

As for Jason, who would later become the machete-wielding “hero” of the franchise, he’s nothing more than a tragic victim in the first film.

But, just as watching her sweet boy suffer due to counselor neglect fueled his mother’s murderous rage, watching his mommy meet her demise at the hands of a counselor turned an innocent outcast into an unstoppable killing machine.

It’s all kind of sweet when you think about it.

But this juggernaut of a franchise didn’t emerge from heartfelt beginnings, a devotion to the genre, or a true passion for crafting a unique story. In fact, its origins are far more pedestrian: Cunningham needed to make some money.

Halloween‘s recent success convinced Cunningham that horror was the way to go, so he went to work on a screenplay with Miller. 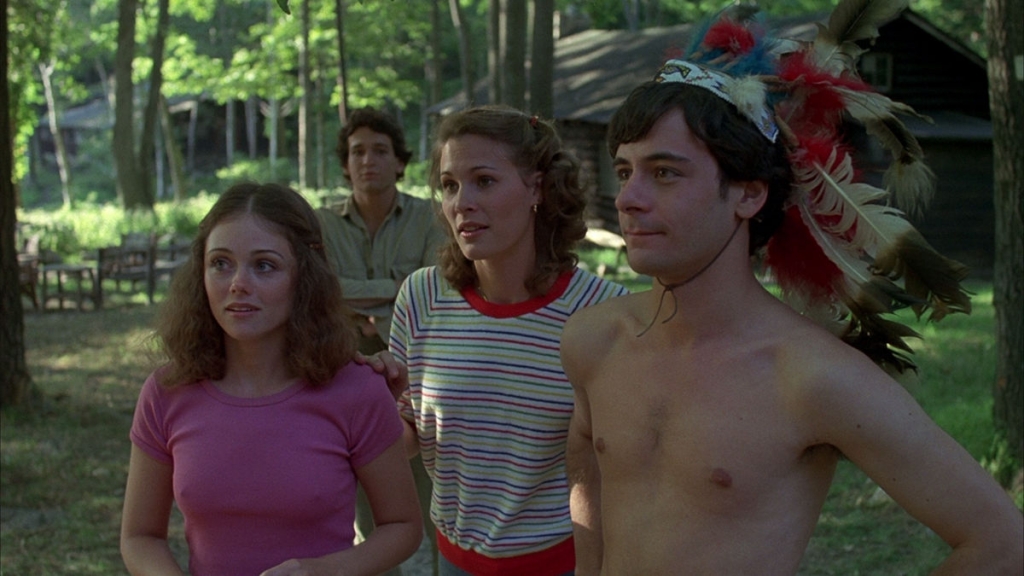 The two incorporated elements of Halloween — a killer who targets teenagers and ruthlessly slaughters them as they attempt to enjoy themselves, and a survivor, a final girl, who faces the killer in the end.

Friday also includes elements of Giallo films where we see the murder from the killer’s point of view, another trick borrowed from classic slashers Black Christmas (1974), and, of course, Halloween.

Miller called the screenplay A Long Night at Camp Blood. It was Cunningham who eventually came up with the title Friday the 13th and immediately took out an ad in Variety to stake their claim on the title. The ad featured the now-iconic Friday the 13th logo smashing through glass, which reportedly generated a lot of interest.

“The thing about the story in FRIDAY THE 13TH is that it’s so profoundly simple […] I think part of that had to do with the fact that we had very little time to waste on conventional things like character and plot.”

Draper also quotes Miller as saying, “What I had done was taken mom and apple pie, and the clean-cut ‘let’s have a ball’ Pepsi generation of these clean-cut kids who were having fun unfettered from adult restrictions and stood it on its head. And I just knocked them off one by one.”

In Miller’s original screenplay, Jason didn’t suffer from physical deformities. One of the financiers thought the screenplay was missing something. Screenwriter Ron Kurz, who was brought in to do some rewrites, added this important detail to Jason’s character. 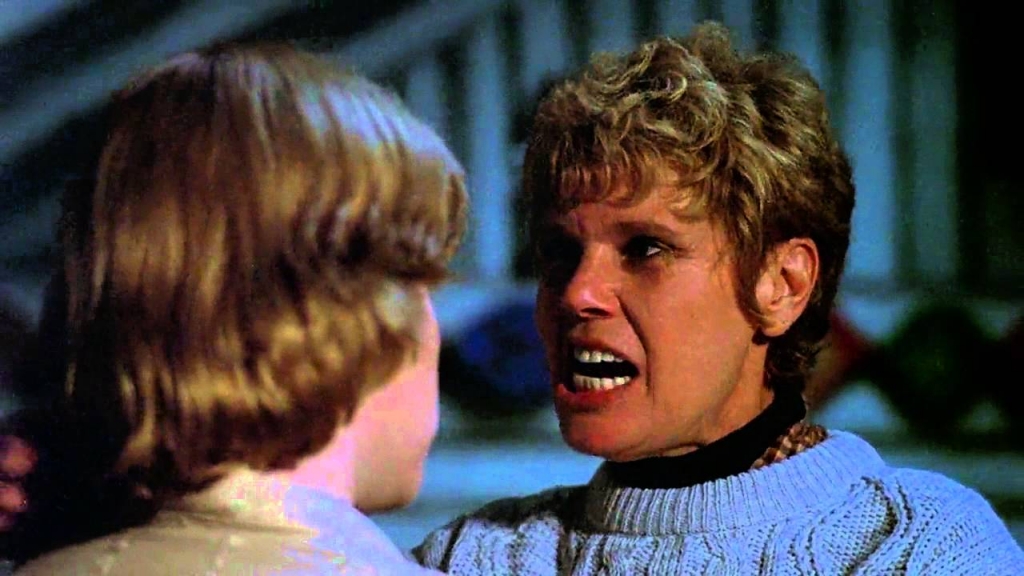 Palmer was a TV actress who had also appeared on Broadway. She didn’t want to do a horror movie. She agreed to do it only because she needed a new car.

Cunningham first approached Shelley Winters to play Jason’s mother. He figured that Winters was a well-known star whose career was in decline, which meant she’d probably be willing to work for little pay. However, she turned him down. Estelle Parsons and Louise Lasser were also approached. Parsons is known for playing Bev, the neurotic mother of the titular character on the sitcom Roseanne and later on The Conners. Lasser was known for her role as the titular character in the ‘70s sitcom, Mary Hartman, Mary Hartman.

Palmer thought the script was “a piece of junk”. But financial worries trumped her desire to make high art, and she — like Cunningham — went for the dollar signs.

Mental Floss quotes Palmer as saying, “I got home at five in the morning, and it was a situation where I desperately needed a new car. If I hadn’t needed a car, I don’t think I would’ve done FRIDAY THE 13TH.”

Although Palmer didn’t think much of the project, she approached her role in a professional manner.

Palmer was a Method actor and felt her character needed a backstory. Taking into consideration how the killer targets teenagers engaging in sexual activity, Pamela’s story was that she had Jason in high school and that her family disowned her.

Henry Manfredini provided the iconic score which was composed of Betsy Palmer repeating, “Kill her, Mommy.” 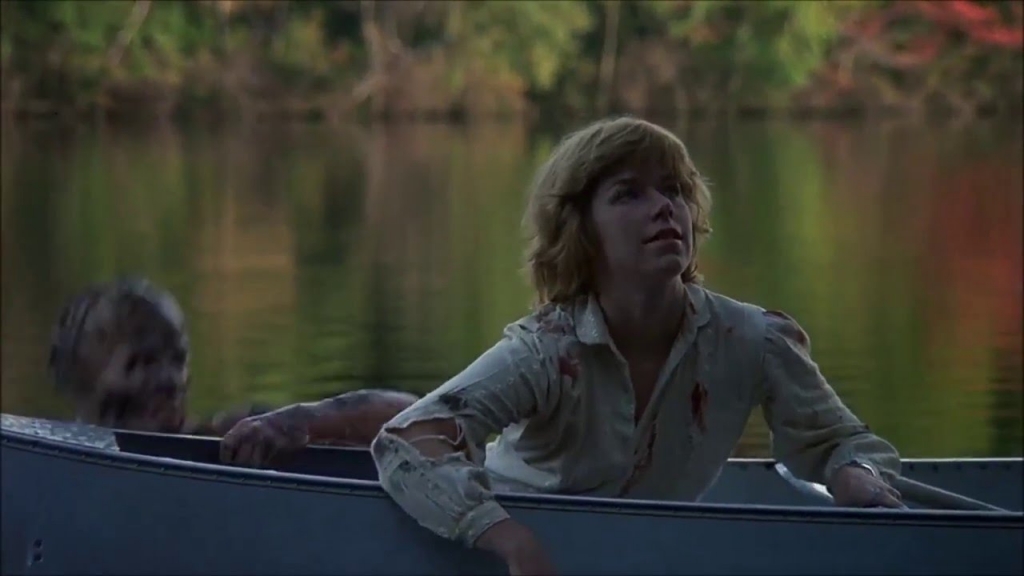 King reprised her role in Friday Part II and has done a lot of voice work. King recently lent her voice as the narrator of the audiobook of Grady Hendrix’s novel The Final Girl Support Group (2021). King has also made appearances on Crystal Lake Tours.

The cast also included a then-unknown actor named Kevin Bacon as a doomed camp counselor, Jack. Bacon would go on to have a successful film career including roles in Footloose (1983), JFK (1991), and A Few Good Men (1992).

Special effects and make-up artists Tom Savini and Taso N. Stavrakis recalled that the most challenging moment was the scene where camp counselor Jack is killed in bed by an arrow through his throat.

Friday was the second-highest-grossing horror movie of 1980 (The Shining claimed the top spot). 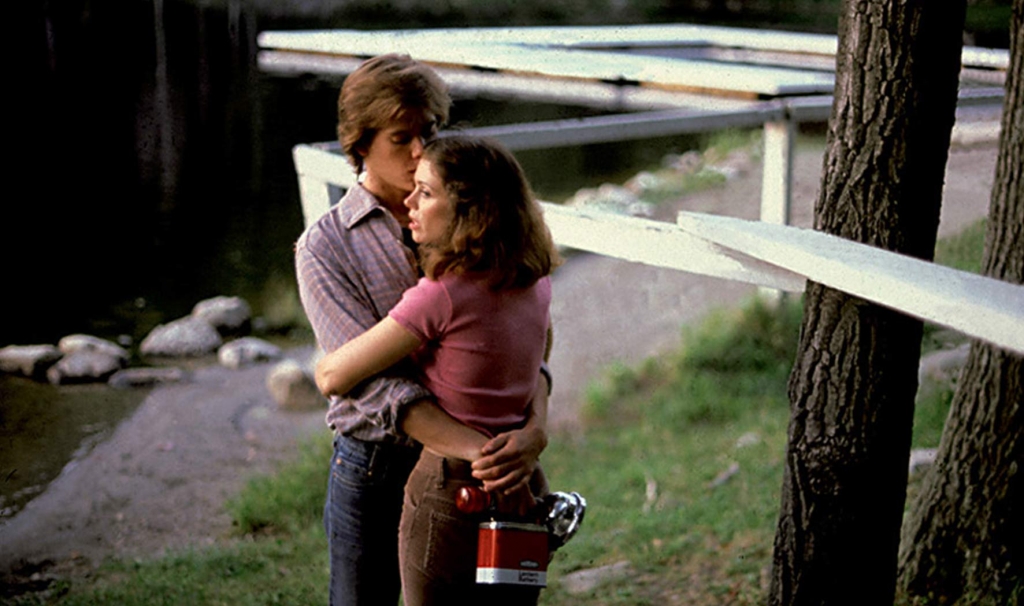 Shot on a budget of $550,000, Paramount Pictures purchased the rights for $1.5 million and the movie earned more than $39 million.

Of course, the movie’s popularity meant a sequel. Part II introduces Jason as the killer — in a sack mask. Jason doesn’t get his iconic hockey mask until Part III.

After Part III, there would be many more sequels, with Jason finally leaving Camp for the first time in Part 8 and heading to the big city in the hilarious cult classic Jason Takes Manhattan. By Part 10, he was ready for something bigger than the Big Apple, heading to space for Jason X.

Then, in 2009, Jason made a triumphant return in the polarizing remake, which mashed up the first three films in the franchise for a fresh new take. Though, since that time, disputes over rights to the lucrative franchise have unfortunately kept Voorhees out of the limelight, even while most other horror icons are enjoying a big modern-day resurgence.

Despite that, it’s hard to deny the lasting impact the franchise has made on the genre.

As the longest-running horror franchise, just ahead of Halloween, its enjoyed a kind of popularity that will likely never fade — no matter how long we must wait for another film. There was also a novelization published in 1987, as well as a wide array of comics, video games, merchandise, and figures — even a plush Jason to snuggle with at summer camp.

No one could have suspected that a shameless cash grab made in the summer of ’79 at a Boy Scout Camp in New Jersey would end up making horror history, but that it did. Jason Voorhees has become part of contemporary pop culture. His face, covered by his now-iconic hockey mask, is instantly recognizable — an image that has become synonymous with horror. 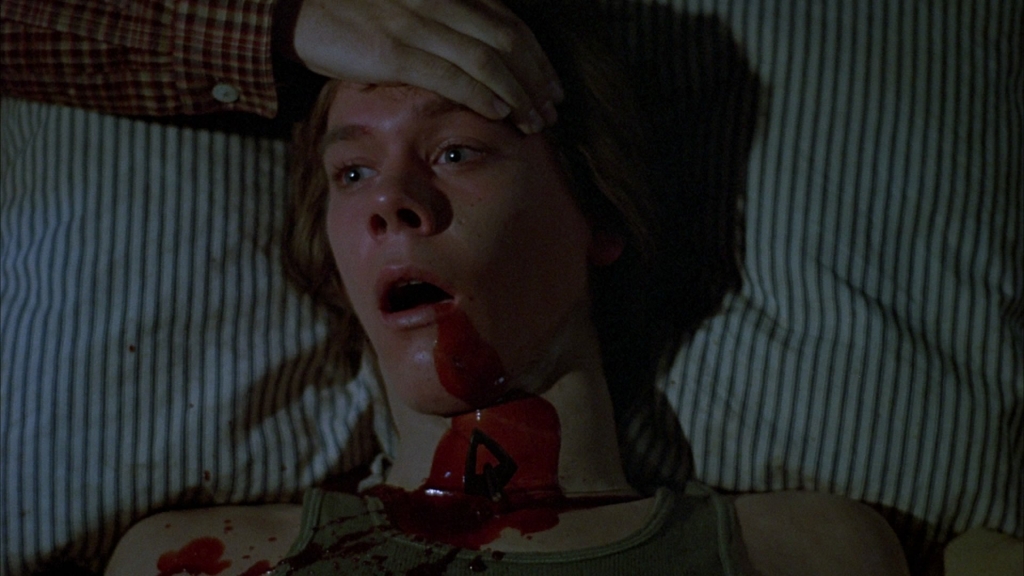 1. During downtime on the set, the cast and crew were treated to music by Lou Reed, who owned a farm near Camp No Be Bo Sco.

2. The famous final scene wasn’t in the original script. It’s unclear who came up with the scene where Jason jumps out of the lake and grabs Alice. However, Savini said that the scene was inspired by the ending of the movie Carrie (1976) where a hand reaches up from a grave to grab the sole survivor of prom night.

3. Friday the 13th screenwriter Victor Miller doesn’t have anything to do with the sequels and admitted that he hasn’t seen any of them, mainly because they made Jason the killer.

4. Mental Floss quotes Miller: “[…] He was a victim, not a villain. But I took motherhood and turned it on its head and I think that was great fun. Mrs. Voorhees was the mother I’d always wanted—a mother who would have killed for her kids.”

6. Several members of the crew stood in to represent the hands of the killer.