In honor of its anniversary, we look back on John Carpenter’s seminal horror classic, the iconic and influential “Halloween” (1978). 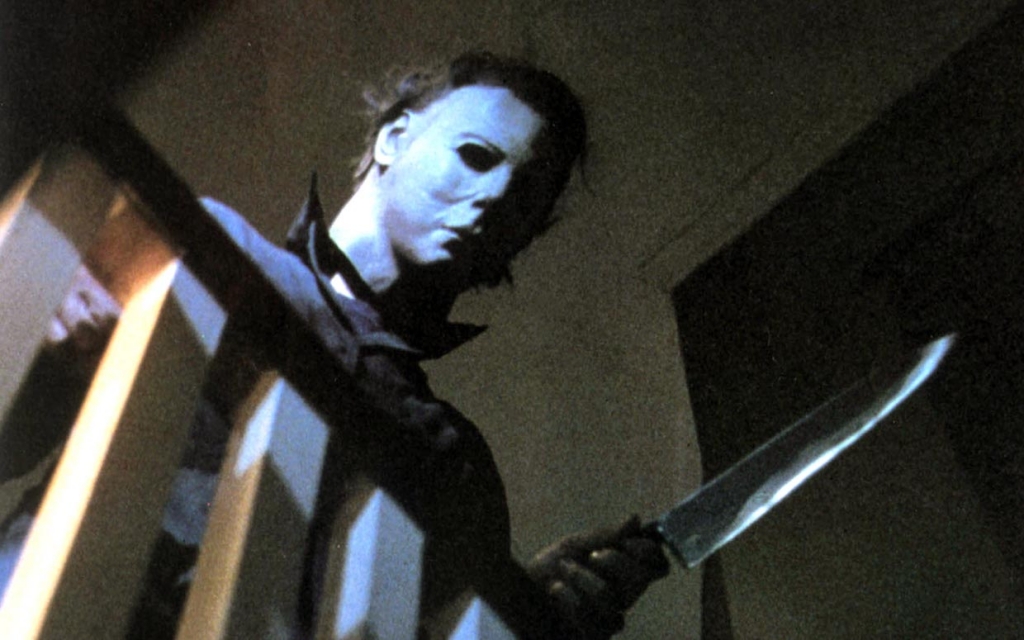 Spooky season wouldn’t be complete without John Carpenter’s slasher classic, Halloween (1978). This perfectly titled film was originally called The Babysitter Murders. Producer Irwin Yablans had an idea for a movie about a killer who stalks babysitters. Director John Carpenter and then-girlfriend Debra Hill reworked it into the iconic slasher film named after the scariest time of the year.

A festive Halloween atmosphere is effectively combined with an eerie soundtrack. Scenes shot with an effective play of light and shadow keep the viewer on edge. The atmosphere gives an overall feeling of someone behind the shadows waiting to do something to us. Add to that, a dark, twisted, and mysterious backstory.

A quiet Midwestern suburban town becomes the setting for a horrific event. On Halloween night in 1963, 6-year-old Michael Myers returns home from trick or treating and kills his sister, Judith. On October 30, 1978, he escapes from Smith’s Grove Sanitarium, heads back to his hometown, and goes on a killing spree. He wears a nondescript mask and doesn’t chase his victims but walks after them. He’s emotionless and mechanical when he kills and seems unstoppable.

Halloween was my first slasher movie. I’ve lost count of how many times I’ve seen it. Maybe it was the writer’s part of my mind combined with a budding interest in true crime that fueled my fascination with Halloween. As I started to explore the stories of real-life serial killers and started writing my own fiction, I wondered about the character of Michael Myers.

The questions that came to mind were: who is Michael Myers and why does he kill? Who were his parents seen briefly in the beginning? Who were the Myers?

Over 40 years later, Michael Myers has become a horror icon. 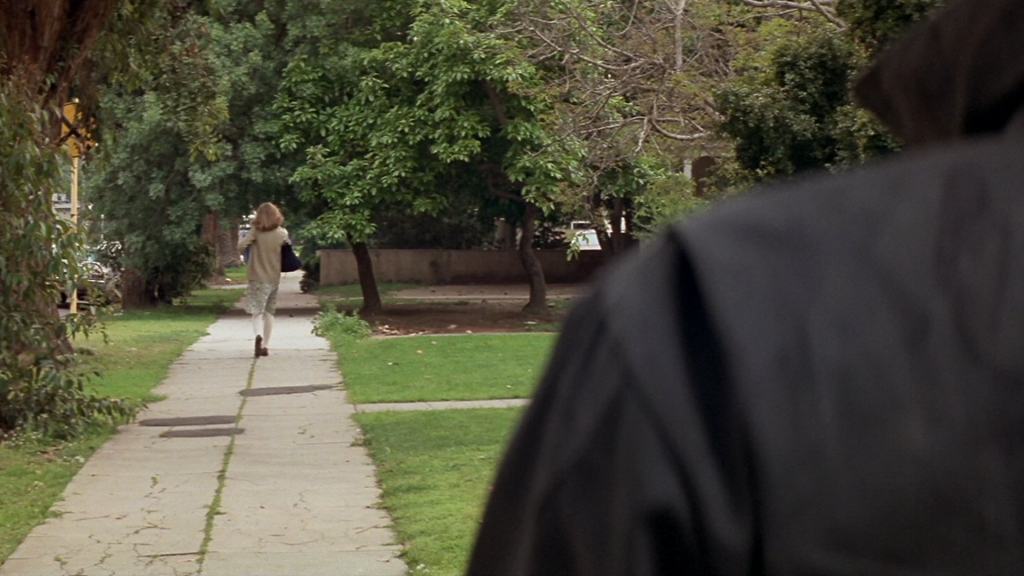 The film spawned a series of 12 films and one more to be released in 2022.

It wasn’t the first slasher film. Both The Texas Chainsaw Massacre and Black Christmas were released four years earlier. These films introduced the now-familiar slasher formula. But Halloween built upon those elements by introducing an actual boogeyman. A masked killer lurks in the shadows in a quiet suburban town and kills vulnerable teens just looking to party on Halloween night.

In a 2018 article for Vulture, “The Story Behind the Original Halloween”, writer Jason Bailey quotes Carpenter:

“It’s an old county-fair haunted-house movie. You say to the audience, ‘You’re going to see something that’s going to scare you. Now get ready. I’m not going to tell you when it’s going to come … but here it comes!’ It’s programmed right in, just laying it on.” 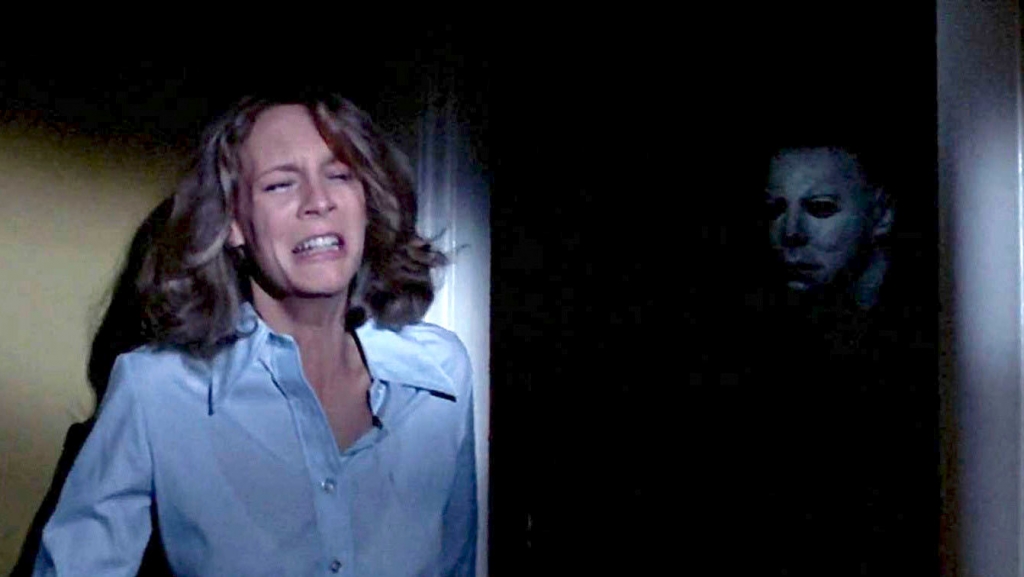 Laurie Strode (Jamie Lee Curtis) is one of the first final girls. Strode fiercely protects the children she’s babysitting as Myers relentlessly tries to kill them. Who wouldn’t root for a young woman and two young children being stalked by a masked psycho?

Donald Pleasance delivers an unforgettable performance as Dr. Sam Loomis. Loomis is a psychiatrist who seems driven insane by his interaction with Myers. After Myers’ escape, Loomis relentlessly pursues him.

Relatability is what producer Yablans had in mind. Bailey writes:

“He worked out the idea of a madman stalking and killing babysitters; everyone’s either been a babysitter or had a babysitter, he figured, so the story was relatable.”

Up until then, horror movies still had mostly supernatural themes, as seen in The Exorcist (1973) and The Omen (1976). Michael Myers wasn’t a demon. He was a real-life boogeyman — a phantom in the flesh.

The now-beloved horror classic opened to mixed reviews. According to Variety, Halloween was “just another maniac-on-the-loose suspenser.” The New York Daily News described it as “schlock shock.”

However, Village Voice reviewer Tom Allen compared Halloween to horror classics Psycho and Night of the Living Dead. Allen described it as “a movie of almost unrelieved chills and violence, conjuring up that unique mix of subliminal threat and contrapuntal physicality employed by Hitchcock.”

Chicago Sun-Times reviewer and infamous horror hater Roger Ebert described Halloween as “[…] a visceral experience. We aren’t seeing the movie, we’re having it happen to us. It’s frightening. Maybe you don’t like movies that are really scary: Then don’t see this one.”

Without a doubt, Halloween has left its mark on horror history.

Carpenter’s slasher classic served as inspiration for many genre greats to follow, including the also-iconic Friday the 13th series. Modern genre filmmakers like Rob Zombie were heavily influenced by the film. Not only did Zombie do the controversial 2007 remake of Halloween, but he also set House of 1,000 Corpse