In honor of its anniversary, we celebrate the legacy of “Theater of Blood” starring the incomparable Vincent Price in one of his best roles. 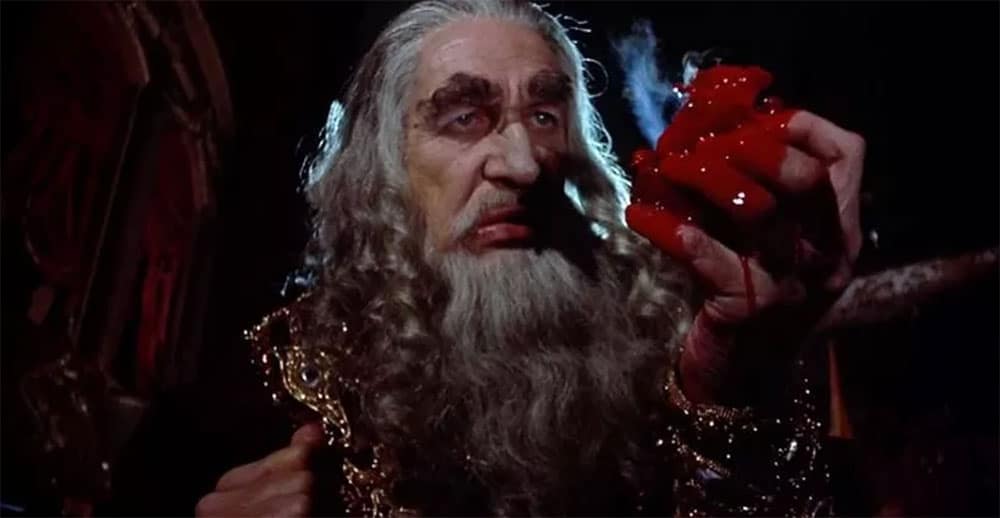 Theater of Blood (1973) is just as over the top and extreme as its title — and it works. The story is original and the cast is excellent, led by horror icon, Vincent Price. Price and his co-star, Diana Rigg, both considered Theater a favorite film out of their lengthy careers.

Theater of Blood follows melodramatic thespian Edward Lionheart (Vincent Price) and his devoted daughter, Edwina (Diana Rigg). Lionheart is presumed dead after jumping from a balcony into the Thames River. After being snubbed by The Theatre Critics Guild at their annual awards ceremony, Lionheart shows up at their after-party and expresses his anger at not receiving a Best Actor award.

This scene is told in flashback and is notable for both Price’s flawless delivery of lines from Shakespeare’s famous “To be or not to be…” soliloquy, in which Hamlet contemplates suicide.

Lionheart delivers the speech as he walks around the balcony disappearing and reappearing as the group of critics follow him from inside of the apartment, opening the window drapes as he continues with the scene from Hamlet. He concludes the scene by leaping from the balcony into the Thames. He’s eventually rescued by a group of homeless people, and Lionheart takes up residence with them in an abandoned theater.

Lionheart plots an elaborate plan to get revenge on each critic. He stages murders based on Shakespeare’s plays. Lionheart and his daughter put on elaborate disguises and lure the critics to their deaths. Lionheart greets them in character, reciting lines from whichever play the critic’s death scene is taken from and adds quotes from their negative reviews of his performances.

The twisted irony is what makes this a great film. 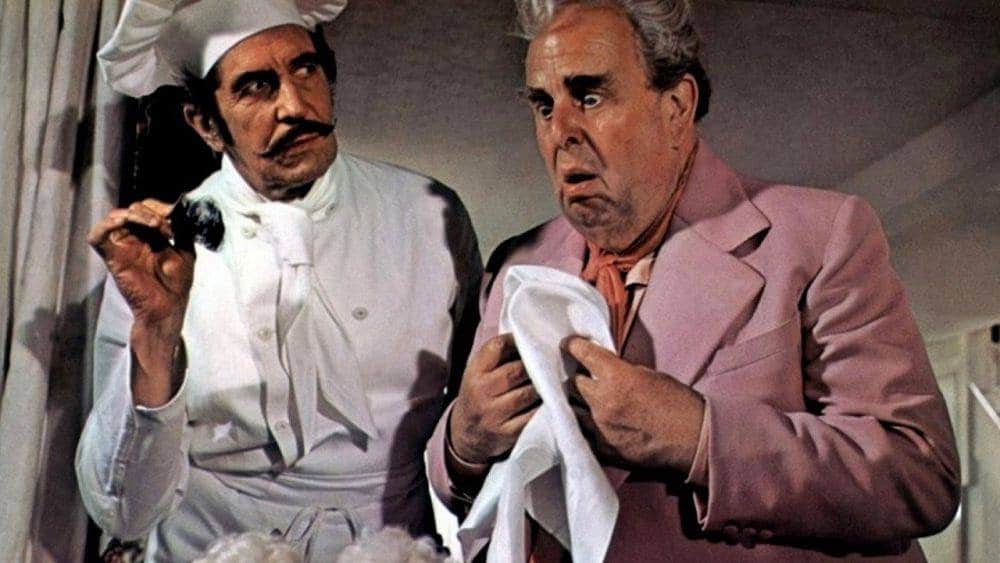 These critics were panning his performances but don’t even realize who Lionheart is when he first enters the scene in character.

They believe both he and his daughter’s performances to the point that even though they realize that each critic in their circle is being picked off one by one, they completely let their guard down and walk into the trap. Lionheart has the last laugh as he makes each one suffer a gruesome and bizarre death, usually with a twist of dark humor. One critic who’s known for being a heavy drinker believes that he’s going to a wine tasting. Instead, he’s drowned in a barrel of wine.

The murders are all genius plots that are almost too perfect to be true, which adds a darkly comedic camp to the film without being “silly.”

For an Othello-inspired plot, Lionheart doesn’t intend to kill his victim, critic Solomon Psaltery. It’s much worse. Lionheart manages to establish a relationship with the Psaltery’s wife as a masseuse. As Lionheart visits her for a session, Edwina, disguised as a man, calls Psaltery from a phone booth. Psaltery arrives, enraged, believing that his wife is having an affair, breaks into the bedroom, and kills her. Lionheart, still in disguise, edges him on, then slips out and informs the nearest police officer about the murder. His goal was to ruin Psaltery’s life, not take it.

Lionheart has his fun getting revenge on those he feels ruined his career, but there is one critic who’s on to him and working with investigators.

Whenever Vincent Price pops up in a discussion, this film is rarely mentioned, but I think it’s one of his best. 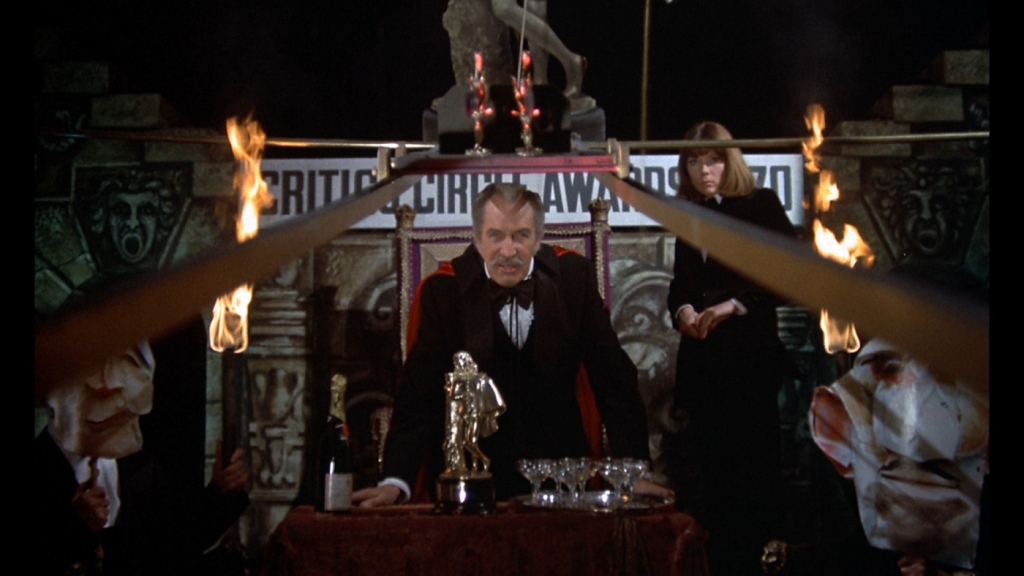 Anthony Greville-Bell wrote the screenplay based on an idea from Stanley Mann and John Kohn. There isn’t much information on the writers. Besides Theater of Blood, Greville-Bell wrote the screenplay for Perfect Friday (1970), a British bank heist film, and served as a writer for a British soap opera, Marked Personal (1973). He was also a sculptor. Director Douglas Hickox’s other films include Zulu Dawn (1979) and Hound of the Baskervilles (1983).

Theater of Blood was one of Price’s favorite films; the same was true for Diana Rigg.

For most of his career, Yale graduate and classically trained Price was typecast in horror movies. Theater of Blood allowed Price to show off his acting chops as he effortlessly delivers Shakespeare’s dialogue. Rigg also delivers a solid performance as Lionheart’s maniacally devoted daughter and master of disguise, Edwina.

If you appreciate very dark humor and elaborate, creative kills in your horror film, I recommend you check out “Theater of Blood” and enjoy one of Vincent Price’s personal favorite and best roles.

Some Fright Fun Facts About Theater of Blood: 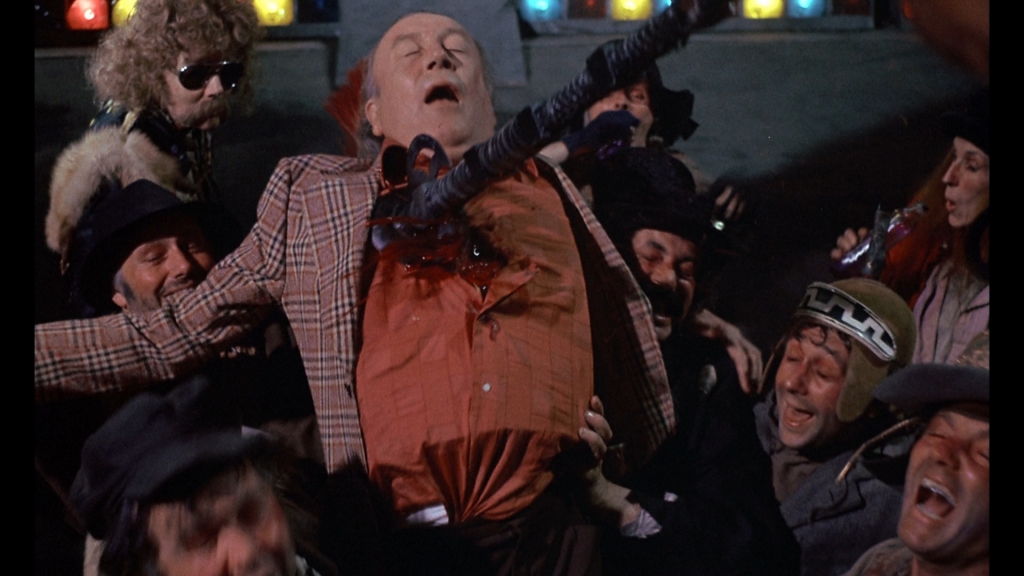 2. The Shakespearean scenes were inspired by the bard’s following plays: Julius Caesar, Troilus and Cressida, Cymbeline, The Merchant of Venice, Romeo and Juliet, Othello, Henry VI, Part 1, and Titus Andronicus.

4. Theater of Blood is often compared to another of Price’s films, The Abominable Dr. Phibes (1971). The protagonist is a professional performer, presumed dead and looking for revenge. The murders have a literary theme and are carried out with a female partner-in-crime.

5. Unaware that he was already married, Diana Rigg introduced Price to future wife number three, Coral Browne, during filming. Browne initially didn’t want to be in “one of those scary Vincent Price movies.” Two friends had to persuade her to do the film. Browne plays Theatre Critics Guild member Chloe Moon.

6. During pre-production, Browne insisted that her wardrobe only have designs created by Jean Muir. Costume designer Michael Baldwin said he couldn’t accommodate her due to budget constraints. Director Douglas Hickox informed Baldwin that he was increasing his budget to accommodate Browne’s request. A very angry Baldwin complied, got Browne the Muir designs, and was infuriated when he found out that Browne kept the clothes after filming.