Now Watch This: HOLIDAY FEAR is a delightful horror short that breathes refreshing new life into the slasher tropes and the concept of the Final Girl. 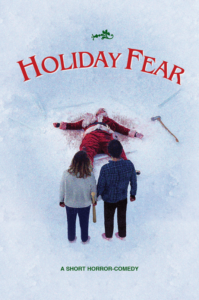 It’s that time of year when we all start to get in the holiday spirit. But, for Horror fans, our love of all things dark and deadly never wanes. Even as we deck the halls and stuff the stockings, we still crave a bloody good time.

The new short HOLIDAY FEAR from Writer/Director/Producer Nicholas Payne Santos is the latest in that hallowed hall of Holiday Horror that successfully satiates our taste for both the festive and the macabre.

At under 3 1/2 minutes (including credits), it’s a quick and fun watch that offers a unique take on the Sinister Santa sub genre.

The short begins with the final act of a slasher film. It’s a scene many Horror fans will be all too familiar with. The killer who has been stalking and terrorizing a group of young people the entire movie is finally dead…or is he?

It’s Christmas morning. A young couple (Rebeca Robles and Eric Whitten) looks out from the top floor balcony of their home, gazing upon a bloodied man in a Santa suit (Ben Elder), his axe laying in the snow just inches from his hand. The woman nervously asks, “Is he dead?” The man wants to make a break for it, but the woman insists they make sure the man who murdered their friends is really dead.

From there, things take a surprising turn — delivering a bite-size Horror treat that is both witty and original.

After screening at thirty three film festivals in the past 6 months (including Fantasia Intl. Film Festival, Telluride Horror Show, FilmQuest, and Nightmares Film Fest), HOLIDAY FEAR is now available to watch online. Check it out below or click here to watch it on Vimeo.

Note: Be sure to watch through the end of the credits.