What: Horror convention and film festival where you can meet guests, watch panels, cosplay, watch features and short films from the horror genre, buy horror related memorabilia and merchandise, and mingle with fellow fans.

How Much: Single Day ($30), Weekend ($50 online, $60 at door); Note Weekend passes also give entrance to any after hour events that DON’T require a separate ticket.

The ENTIRE film festival schedule is below. Please note the locations for each screening, as they take place in two entirely different buildings.

The H2F2 Screening Room (located at the Ramada Hotel):

For full information about celebrity guests, autograph prices, panel times, and finer details about the convention, please visit horrorhoundweekend.com. It’s highly recommended that you check the Facebook page for Horrorhound Weekend first before contacting staff with any concerns.

After hour events include:

HENRY ROLLINS PERFORMS HIS SPOKEN WORD!
On Friday evening, Henry Rollins will take the stage at 9PM for performance of his spoken word and
comedy at the Sharonville Convention Center. A limited amount of admission tickets for this event are still available at www.horrorhoundweekend.com for a low price of $35 (Henry’s regular touring event can often see admission prices in the $60-75 range – so you definitely don’t want to miss out on this limited event!). Attendees who have purchased admission to this event will need to check in at the HorrorHound Weekend registration booth located at the Sharonville Convention Center to acquire their physical ticket for the event at any time prior to 8:30PM, when doors to the event open for seating. And a reminder: VIP and Platinum Pass holders are free admission (and must pick up their tickets upon registration).

SCAREoke
Attendees looking for some fun on Friday night after the doors close at the convention center can head over to the Ramada Plaza Cincinnati Sharonville. Blue Sky Entertainment will be set up in the restaurant/bar area at 10PM to present another round of HorrorHound SCAREoke! Please be sure to sign up for the karaoke fun on the official HorrorHound Weekend Facebook page by commenting on the SCAREoke post with your name and song choice (be sure to keep your choices spooky!). 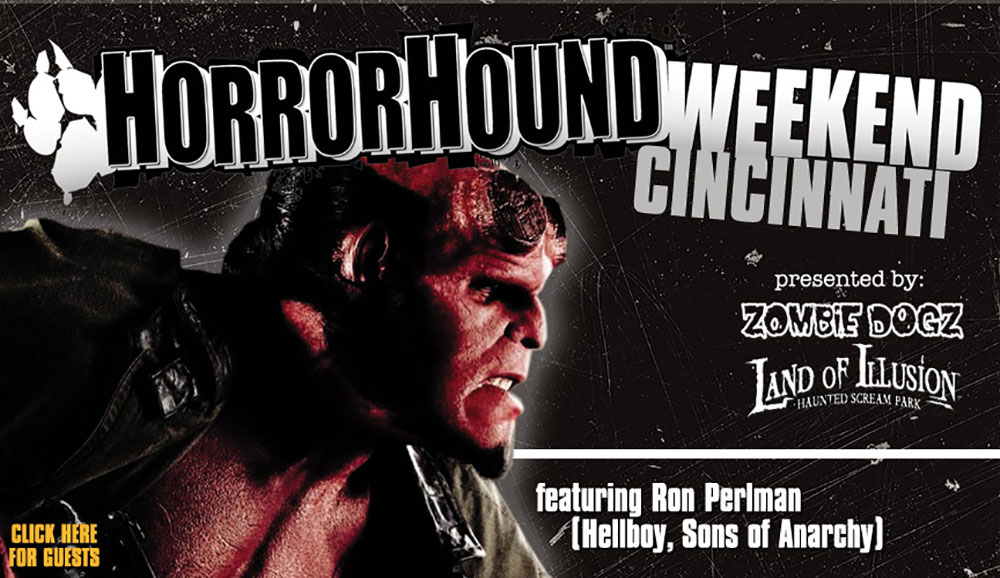 HORRORHOUND: NIGHT TERRORS COSTUME BALL!!!
Saturday night’s after-hours event will feature our HorrorHound: Night Terrors Costume Ball! Starting at 8PM, we will open the doors to the Grand Ballroom at the Ramada Plaza for an evening of entertainment with MCs Mister Hamilton and Woody, including music by DJ Joel and performances by Monster Dolls, The Big Bad, The Undead, and Clownvis Presley as well as the annual Horrors of Cosplay costume contest host by Lady Glamorstein. As always, entrance to the Saturday after-hours event is free to all HorrorHound Weekend ticket holders. Costumes are not mandatory,though we do encourage all ball-goers to come dressed up in their horrific finest! The Ball will go well past midnight!

HORRORS OF COSPLAY COSTUME CONTEST!
The Horrors of Cosplay costume contest will be a part of the HorrorHound: Night Terrors Costume Ball festivities! Starting at 8:30PM on Saturday, we will have a photo-op station set up at the back of the Grand Ballroom, where costumed contestants will take a professional photo for HorrorHound Magazine with our event staff, receive a contestant number, and will be judged by a small group of selected professionals. Photos and judging will take place between 8:30PM and 10:30PM. After entering the contest – we ask that you enjoy the evening’s entertainment, and show off your costumes until it’s time for the winners to be announced! At 11:00PM, the finalists of the costume contest will be announced, based on initial judging. A select number of finalists will be called to stage by number, and the winners will be announced! Prizes will be awarded for best ORIGINAL costume design – best MOVIE-BASED costume design – and best OVERALL!

KIDS COSTUME CONTEST!
A special KIDS ONLY costume contest will be held on Saturday afternoon at 5PM at the Sharonville Convention Center in the Q&A/Panel Ballroom. This is for children 14 and under only. Please come and support this awesome event! Registration will begin at 3PM. Contestants must line up at 4:30PM outside the Q&A/Panel Ballroom. *Parent or guardian must be present for all ch