“THE HOUSE OF VIOLENT DESIRE” milks the drama and teases molten hot sexual liaisons, but doesn’t deliver a full release in this psychosexual, gothic drama.

Cordetta withstands the attention of Lord and Lady Whipley to remain employed, and to try and solve the mystery of her lost brother who may have past ties to the Whipley family.

After the introductions of the Whipley family and Cordetta, the story skips ahead one year. The youngest daughter Evelyn (Yasmin Ryan) wakes up screaming, tied to her bed, and covered in blood. Lord Whipley has also disappeared, without a clue to his whereabouts. Amidst the uproar in the castle and the search for Lord Whipley, a handsome stranger (Carl Andersson) arrives seeking shelter.

His arrival seems to awaken pent-up sexual longings in the family as well as unlocking the children’s curiosity about Lord and Lady Whipley’s hidden past and their own desires.

Written and directed by Charlie Steeds, “THE HOUSE OF VIOLENT DESIRE” is a lush, gothic production reminiscent of Hammer Films and Roger Corman productions from the 1960s and 1970s.

Much of the look of the film can be attributed to the work of cinematographer Michael Lloyd. Lloyd brilliantly uses color and shadows to add to the tension of scenes. The shadows and dark of the movie brilliantly add to the mystery of the story, highlighting the secret memories in the walls and rooms of the mansion.

The actors, led by Esme Sears, are strong and believable. They are sometimes let down by the dialogue, which can come across like they swallowed one of the Harlequin Romance novels my mother used to read.

The cast isn’t helped with dialogue like, “A most mysterious occurrence,” which is uttered by the Whipley’s butler Sylus (Barrington De La Roche) when he finds blood on the floor, or “Finding Master Whipley on this dark winter’s night seems an impossible task ma’am. We fare better to begin this search at daybreak.”

The dialogue would be visually evocative reading off the page, but hearing it spoken in a movie is jarring because it does not sound natural to the ear.

Speaking of Sylus, he has the unenviable task of being the character who knows all the family secrets and history. This also means that he is the primary exposition character. Sylus appears at opportune moments to deliver dialogue designed to fill the audience in on important story elements.

Sylus is a mixed bag, straying a little too closely to a comical performance but not quite crossing that line into farce. Think of Sylus as a hybrid servant who has the characteristics of Houseman in the Sam Raimi SPIDER-MAN movies and Chris Elliott’s Hanson from SCARY MOVIE 2.

It’s not just the dialogue that, at times, fails the actors, it’s also the story.

The premise, an aristocratic family with terrible secrets that come undone by the appearance of new elements (the servant and the stranger), is a strong one. The time jump to one year after Cordetta is employed at Black Rock Manor is unnecessary and cheats the story of character building. After the time jump there are character interactions and decisions that should have been built up, but because they happened during this time we didn’t witness, there’s no emotional investment.

For example, when one character reveals their love for another and they both plan to run away together, it carries no emotional heft. It only creates confusion and surprise as we’re left to wonder how this relationship started in the first place.

THE HOUSE OF VIOLENT DESIRE is labeled as a dark drama with psychosexual themes. 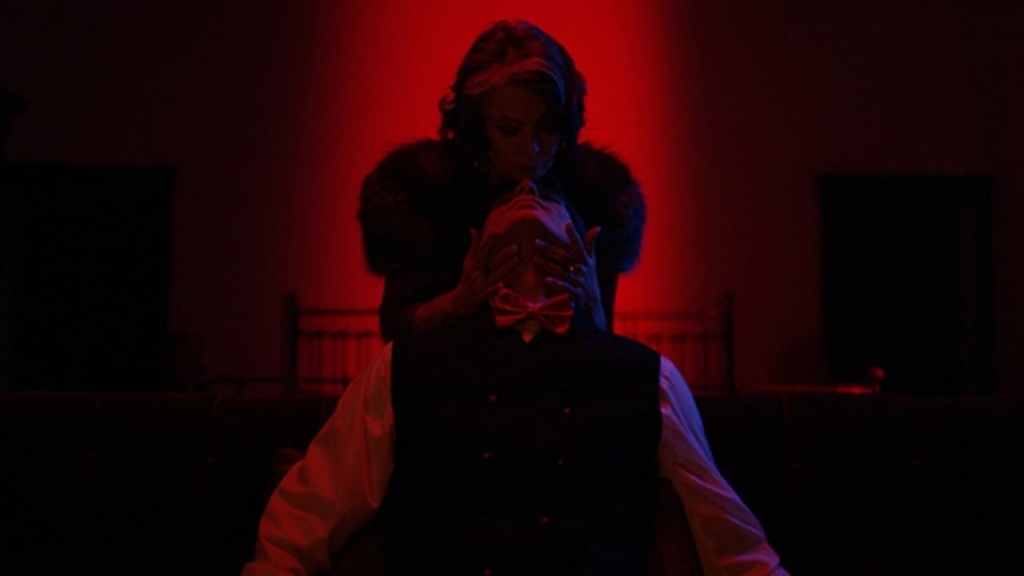 It does partly deliver on the psychosexual themes with some titillating scenes that will get the loins heated.

The movie borders on the edge of a gothic exploitation flick, but teases by holding back on anything sexually graphic. Writer/Director Charlie Steeds didn’t need to make an EMMANUELLE movie, but something closer to FIFTY SHADES OF GREY could have elevated THE HOUSE OF VIOLENT DESIRE to an exceptional erotically charged drama.

There is a scene involving the seduction of the Whipley’s son Adriel (Daniel McKee) by the Stranger that is charged with homoeroticism. The scenes go just far enough to excite without being exploitive or vulgar, and it made me long for more scenes that stretched the boundaries of sexual drama.

The film is currently available to watch for free for Amazon Prime subscribers.