Tobe Hooper follows up “Texas Chainsaw” with a wandering plot that is extremely stylized and filled with prophetic horror history. 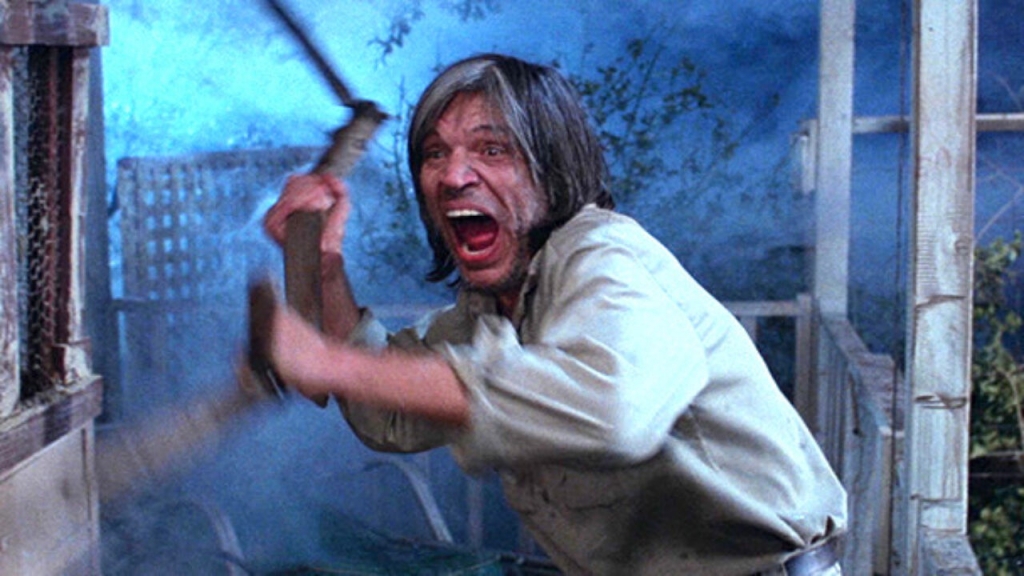 The owner of a run-down motel has a hungry crocodile and not much to feed him — until some unfortunate travelers drop in for a stay. Let’s dig into 1976’s “Eaten Alive”, directed by Tobe Hooper!

Based on rumors that circulated in Texas since the 1930s about murderer Joe Ball feeding his victims to his pet gator (though never confirmed), Hooper continues his streak of “true stories”, though this one may be a little bit closer to plausibly true than Texas Chainsaw. Chainsaw of course was inspired by serial killer Ed Gein and not actually based on real events in total.

The trailer name drops Jaws as the benchmark of terror that you should expect, but that couldn’t be a more off-base comparison.

Hooper knocks another casting choice out of the park, following Edwin Neal as the Hitchhiker in The Texas Chainsaw Massacre who had one of the most (if not THE most) memorable performances in the annals of horror, with the spot-on casting of Neville Brand as the psychotic hotelier Judd.

The score, which was written and performed by Hooper, is constantly disorienting. 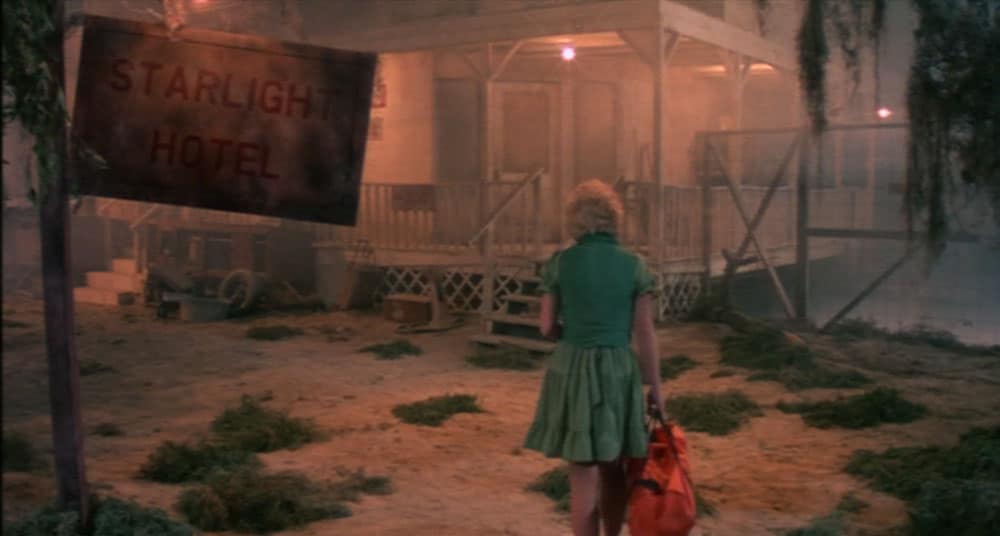 John Carpenter may be the high bar for Director/Composer but Hooper makes a case as the unsung hero of that category after scoring both this film and Texas Chainsaw. They aren’t filled with hooks and goosebumps-inducing synth, but it constantly picks at your brain like a nagging scab.

As much as I love the atmosphere and the plethora of trivia that can be extracted, there just isn’t much to the story.

It is aimless and sometimes feels like they’re operating without a script. It’s hard to follow the straight family when they seem crazier than the Sawyers.

When some plot is finally pushed, we’re following the B-story, and it’s never engaging enough.

That said, Hooper broke his previous mold by showing blood, and lots of it, and I’m not mad at him for it. A nice little unheralded, sleazy seventies horror by a troubled master who could never seem to stay on a film for its entirety. 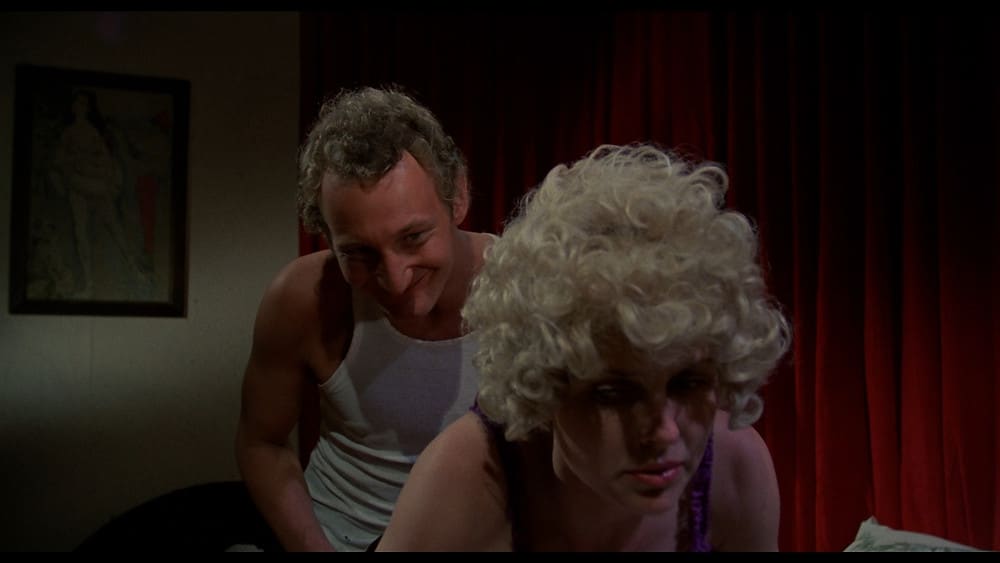 Almost a decade before old pizza face put on the finger knives and spewed quips and puns, he delivered that famous line. No, not “It’s showtime, Bitch!” Before that one. “My name’s Buck, and I’m here to fuck.!”. That’s the one! Robert Englund — Freddy Krueger himself — features as the sleazeball, horn ball, Buck whose infamous line was re-used by Quentin Tarantino in Kill Bill.

There may be no better scream in horror’s long history of guttural shrieking than Marilyn Burns and she does not disappoint this time around. She is, of course, Sally Hardesty in Hooper’s original Chainsaw and has popped up in a couple of the series installments.

An unmistakable face, the late William Finley (Roy) is best known for his beautiful performance in Brian De Palma’s absurd and brilliant Phantom of the Paradise as the Phantom/Winslow, but he also had a role in another Tobe Hooper film which is underrated, The Funhouse.

She’s covered in heavily caked-on make-up, but under all that product of Miss Hattie lies the beautiful face of Carolyn Jones who played the original Morticia Addams in the nineteen sixties TV version of The Addams Family.

Before her pop-culture fame on some Housewives show, Kyle Richards worked up a really prolific horror resume. Of course, John Carpenter’s Halloween 78 counts amongst the top where she played little Lindsey, a role she reprises in the recent Blumhouse sequels. 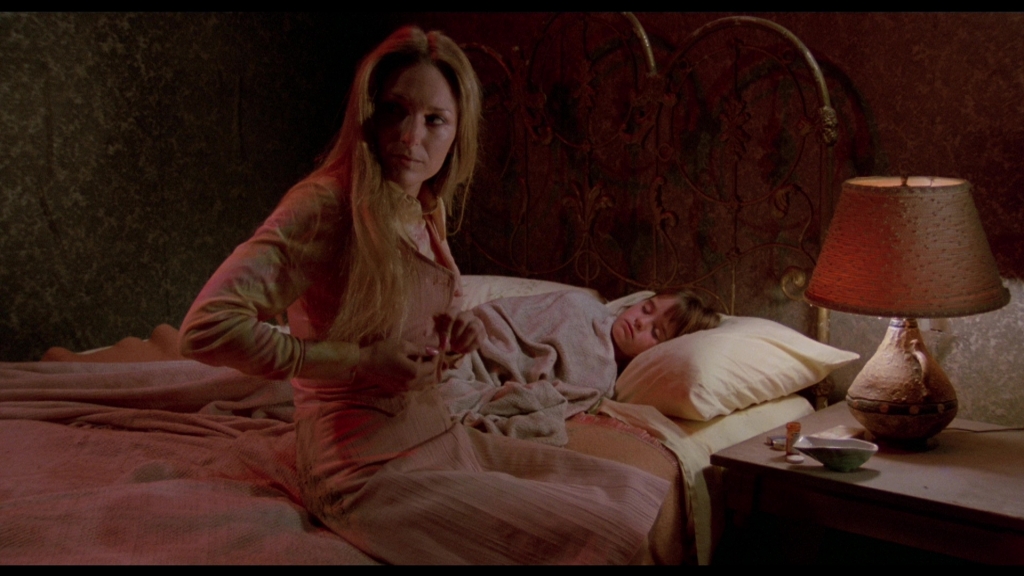 If you watch the film, I won’t have to tell you the gratuitous line spoken by the ignorant young scum at the bar. Yes, it’s realistic. I can vouch for that from my years of touring the country, performing in backwoods towns and seedy venues, and spending nights in dive bars in towns I can’t recall the name of and would never return to. But is it necessary to be that “realistic” here? Absolutely not.

Filming this all on a sound stage gives it such a unique atmosphere. It has a comic book or pulp feel to it. Very artificial but stylish. It serves to create a sense of entrapment and claustrophobia and manifests a faux fright. The type of dragon I’m always chasing when watching horror.

If any of Tobe Hooper’s films could be deemed off-limits, it would be Texas Chainsaw, but we all know how that has gone. I can’t blame anyone involved since the stories of how little money actually made it into their hands from the original film are cemented in horror history at this point. Don’t see why this one couldn’t be remade as well, or sequeled and prequeled to death.

It’s hard to imagine the film hasn’t influenced certain films along the way and was even paid an homage in the brilliant Tucker and Dale vs. Evil, but there is no official progeny to report.

Arrow Video released a Blu-Ray with a fresh 2k scan that includes a ton of extras, including interviews, career retrospectives, and a bunch of BTS. You can also conveniently stream it on Shudder, AMC+, Vudu, or Plex.