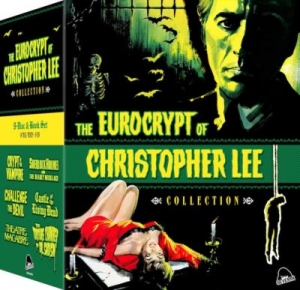 To horror fans, the name Christopher Lee brings up a specific image: the Dracula of Hammer Films. Sir Christopher Lee is, as his 1977 autobiography so brilliantly describes, “tall, dark, and gruesome.” Despite a long and storied career as an actor with nearly 300 movie and television credits, Lee will forever be associated with Dracula.

The movies that Lee is best known for, aside from Dracula — the Hammer films, Star Wars prequels, The Lord of the Rings trilogy, The Wicker Man — are a tiny fraction of the film work of the legendary actor. The new box set, The Eurocrypt of Christopher Lee by Severin Films shines a needed light on a handful of films starring Christopher Lee that don’t get the attention some of his other work has.

The Eurocrypt of Christopher Lee includes five movies and two seasons of a Polish anthology television series, along with a book by Christopher Lee biographer Jonathan Rigby.

The five movies are solid and, aside from Sherlock Holmes and the Deadly Necklace, are gothic horror. In each movie, Lee brings a gravitas to his role and lifts the movie on his tall, broad shoulders.

Castle of the Living Dead (1964) finds Christopher Lee portraying Count Drago who invites a local acting troupe to his castle. The movie is a loose retelling of House of Wax with a villainous and lecherous performance by Lee. The movie is also notable for being the big-screen debut of Donald Sutherland, in two roles, and being produced by Paul Maslansky who went on to produce the Police Academy movies.

Severin Films proclaims Challenge The Devil (1963) to be the most obscure film of Lee’s illustrious career. In this film, a group of hippies break into a castle and are tormented by phantasms and torturous Christopher Lee, who may be the Devil himself. This may be one of the lesser-known films of Lee’s career, but it’s also one of the strangest and weirdly psychedelic entries in Lee’s film oeuvre. 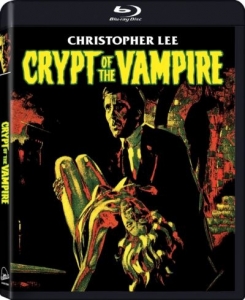 Crypt of the Vampire (1964) is inspired by the Carmilla novella by French author Sheridan Le Fanu. In a switch, Lee does not portray a vampire but Count Karnstein, whose daughter is plagued by dreams of various members of her family, dead and drained of blood. Count Karnstein believes that his family is cursed by his ancestor, Sira Karnstein, who had been accused of witchcraft and burned at the stake.

Dripping in atmosphere, this gothic tale is engaging and disturbing. A mix of vampire lore, witchcraft, possession, and satanic rituals combines to create an inspired re-interpretation of Le Fanu’s classic tale.

The Torture Chamber of Doctor Sadism (1967) is my favorite movie of the set, and also one that is included on another Severin Films box set, Hemisphere Box of Horrors, in a 2K scan with no extra features. Don’t worry if you have the previous collection, because the movie in The Eurocrypt of Christopher Lee set is a 4K scan from a German negative and now includes commentary tracks, Super 8 shorts, trailers, and more.

This movie is inspired by, rather than a straight interpretation of, Poe’s The Pit and the Pendulum. This is not only my favorite movie of this collection but the best movie of the set, featuring strong performances across the board, especially by Lee as the evil Count Regula. After being drawn and quartered for murdering a dozen women, his faithful servant collects the pieces of his body and prepares to resurrect the murderous Count to continue his wanton destruction of virtuous women.

Lee and director Terence Fisher reunite in the mystery comedy, Sherlock Holmes and the Deadly Necklace (1962). This was a movie I labored through. It’s not so much the quality of the movie per se, but I’m honestly not a fan of the Sherlock Holmes character. Lee leans into the more acerbic qualities of the great detective while the loyal sidekick Watson (Thorley Walters) acts as the comedic counter-balance to Holmes. 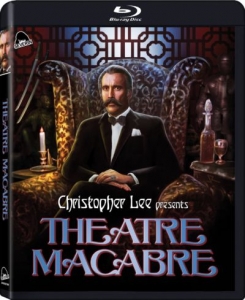 The collection concludes with my overall favorite of the set. Theatre Macabre (1971-72) is a sci-fi/horror anthology from Poland, hosted by Christopher Lee. There are 24 episodes included, each approximately 25 minutes in length with Lee providing the intro and outro to each episode. Lee’s segments are similar to Alfred Hitchcock’s from his series Alfred Hitchcock Presents, instilling a macabre sense of humor into his introduction and summation of the episodes. Lee even dons the Dracula costume for one episode.

As with any anthology, there are hits and misses, but this series has more hits and makes for an enjoyable watch. The quality is akin to the Rod Serling series NIGHT GALLERY. The set comes with an extra disc containing the soundtrack to Castle of the Living Dead. It’s a perfect piece of music for the Halloween season. While it’s a solid set of music, I don’t envision returning to it outside of Halloween.

Each disc, aside from Crypt of the Vampire, is stacked with commentary tracks and interviews that give meaningful insight and historical perspective to the movies. Of note is a commentary track from film writer Kat Ellinger for Castle of the Living Dead. Ellinger has become one of my favorite film historians to listen to whenever she is included on a movie commentary track.

She offers an incredible amount of information, entertainment, and history to all the movies she covers. This commitment to her love of Euro movies and gothic horror is clear when listening to her discuss Christopher Lee and Castle of the Living Dead.

The real treat in the box set is the bonus disc, Relics From The Crypt.

The disc has documentaries involving or about Christopher Lee, rare interviews, and appearances by the actor. On this disc, you not only learn about Lee’s early Euro work in the 1960s and 1970s but his overall career and his thoughts on the horror genre. Additionally, there is a documentary where he discusses the life and career of Boris Karloff.

In addition to the information about the movies contained in the box set, the interviews dive into the entirety of his movie career. I was surprised to learn that his favorite movies were the horror movies involving cults, like The Wicker Man (1973) and To The Devil A Daughter (1976), which was the last movie produced by Hammer Films before their revival in the 2000s.

The discs’ features, along with the book by Lee biographer Jonathan Rigby, give fans an in-depth look into the career and life of the legendary actor, author, and musician.

When Severin announced that this set was being released, I could not wait to receive the set in the mail. This collection does not disappoint.

Not only does Severin deliver some of the lesser-known films of the Lee filmography but unearths the rarely seen Theater Macabre television series. The collection also includes a treasure trove of historical commentary tracks, interviews, and documentaries that are about Lee or include Lee’s insight into other genre subjects.

THE EUROCRYPT OF CHRISTOPHER LEE is, quite simply, one of the best box sets that Severin Films has produced.

Castle of the Living Dead: