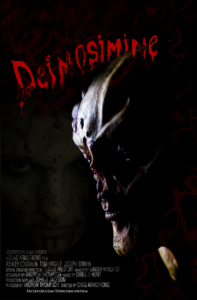 Recently I’ve had the chance to watch some really good Indie films. One of the main reasons is an awesome distribution company called LeglessCorpse films. In a world of micro budget films, it would be sad to create the next hit horror movie only to have it go undiscovered by horror fans — with so many never getting the chance to see how good it is.

LeglessCorpse films is the brain child of Chad Armstrong and is a site dedicated to independent horror films. They distribute the lesser known horror greats on DVD/Bluray and VOD. Not only does Chad own LeglessCorpse.us, he also owns and operates Horror Inside the Box and works with Crypt TV. With help from these resources, first-time and struggling filmmakers have an outlet where they can showcase their work.

Chad is also a filmmaker himself. Together with co-owner of LeglessCorpse films, Andrew Thompson, Chad is the director and producer for the new movie written by Andrew, Deimosimine. Your LA Zombie Girl got a chance to interview Chad Armstrong, to find out a little about his life, his company and his new film Deimosimine. Los Angeles Zombie Girl: Hi Chad! I just got done watching the trailer for Deimosimine. It looks really cool. Can you tell me in your own words the plot of the film?

Chad Armstrong: “Sure, it’s about an experimental drug that can cure opiate addiction. It takes the addict on a bad trip, like a REALLY bad trip, and scares the crap out of them so bad they never want to touch the stuff again. However, when Cindy enters the picture, the doctor is not aware of her father’s past mental history that she has inherited — which, in turn, makes things a little crazy. She can’t distinguish reality from what the drug is creating. As the side effects begin to worsen, so do her hallucinations… to the point where she feels threatened from these aberrations and begins to defend herself. Yet the demons and monsters are not what she thinks they are.” 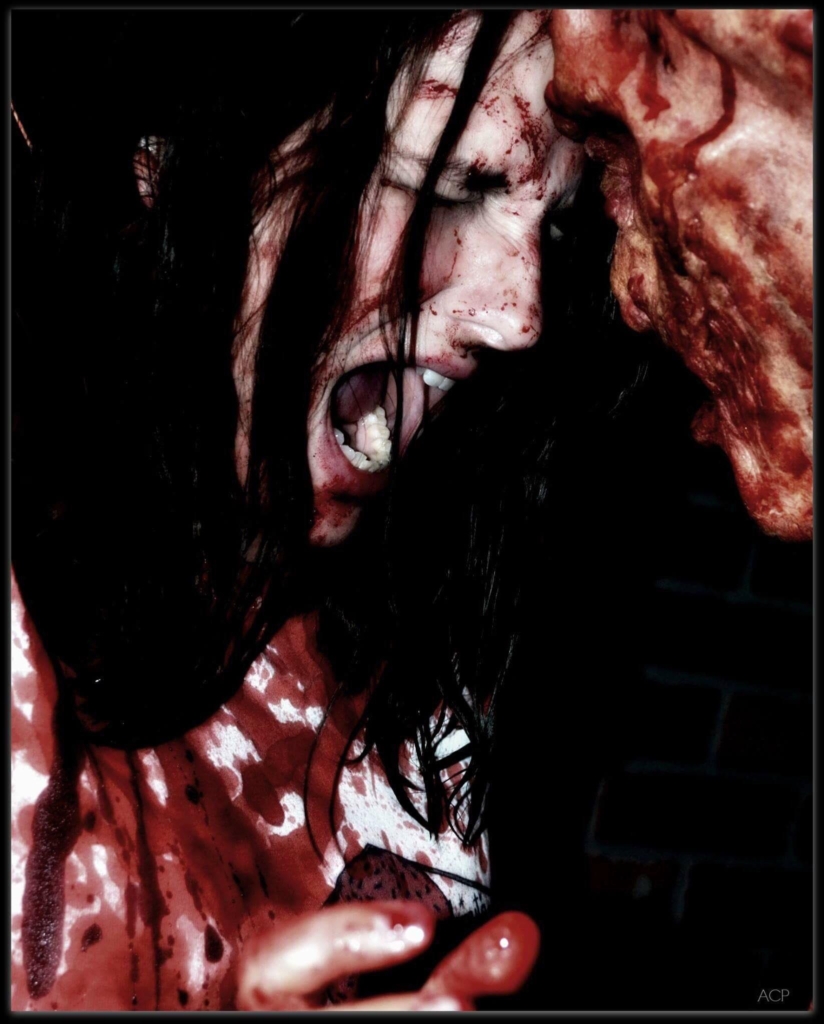 LAZG: What can you tell me about the process of making this film?

CA: “Well, my wife pitched me the concept of the story, which was really cool because there were no restrictions on where these hallucinations could go. So we could make it as crazy and outrageous as possible. I put up an Indiegogo campaign for some ridiculous amount — like 75K — not thinking we would make a dime. But we actually raised about 7k (before fees of course). I was totally blown away by the support.

As the crowdfunding campaign gained momentum early on, we started the casting process and script development (current script is by Andrew Thompson, LeglessCorpse.com Editor-in-Chief), as well as pre-production stuff. So we ended up raising (after fees) about $4,500, which wasn’t nearly what we needed to do a practical creature feature film (about 20K) with four creatures. However, we kept plugging along.”

“We are now well on our way to finishing up, raising funds through pre-orders, prop sales, etc., through Deimosimine.com. We are still needing funds to finish up. But we went from needing 20K to now being just about $2000 away from what we need to finish the creatures. We only have one more to film, along with a couple of really cool FX gags. So hey, anyone reading this that has an extra $2K laying around hit me up, haha!!” 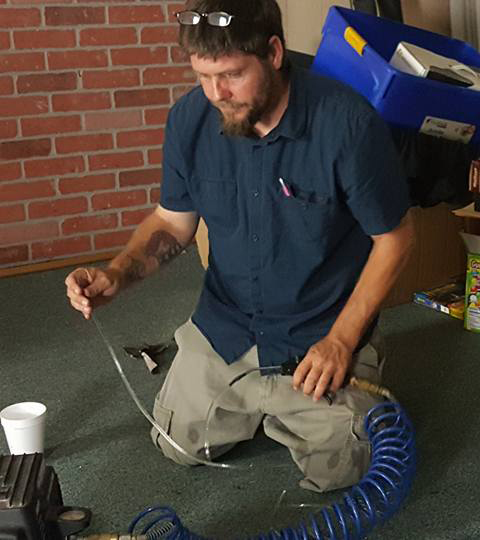 LAZG: Deimosimine is about drug addiction. Is there any significance for that subject, or was it just a cool idea?

CA: “The concept came from my wife. But, no, no one has a drug problem! I mean, we were all on set trying to figure out how to make the cooking and injection of the heroine look real because none of us knew how to do it. That was pretty funny.”

LAZG: What was it like working on Deimosimine? Do you have favorite moments?

CA: “Well, we are still shooting, but everyday has been a blast. We rented an old video store in Somerville, Alabama and turned it into our set — building flats and dressing it. But it also has 4 small rooms. So before a shooting over weekend, a bunch of us will crash there on air mattresses. It’s like a huge slumber party and a lot of fun as we have some drinks and get the set ready for the next day. I’m not saying it was as comfy as the full size mattress I have at home of course, but it was still a blast!”

“The makeup team is hilarious. Tara, Mayela, and Ginger are so fun to hang out with. When it’s an FX shoot and our FX maestro, Dennis Preston, stays over, it’s always cool cause he doesn’t sleep. He’ll be up all night airbrushing monster penises or a cool creature appliance.”

“Every shoot with this team is a favorite moment, everyone is just amazing and talented!” 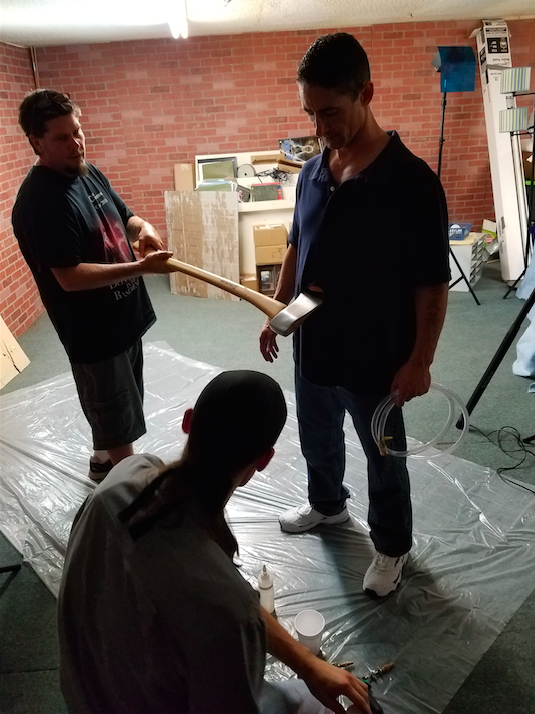 LAZG: Is this your directorial debut or have you done other films?

CA: “It’s my first feature debut. I’ve been in the filmmaking business since 1992 when I did makeup FX for Wayne Kramer’s Blazeland. From then on, I shot a lot of short films. I haven’t shot anything since the Cannon XL1 was the must have camera, haha. But after starting the distribution end of LeglessCorpse, I really wanted to get back into it. The concept for Deimosimine seemed like the perfect one to jump back into with.”

LAZG: Tell me about LeglessCorpse. What made you decide to distribute horror films?

CA: “I am co-owner of LeglessCorpse Films, along with Andrew. Andrew is such an amazing guy and we really clicked. So I decided to bring him on as a partner. He pretty much runs LeglessCorpse.com, and I’m hands on in the distribution side of things.”

“I decided to distribute movies because there were so many great indie, low budget films that other distributors didn’t touch. And, if they did, they wanted to change so many aspects of the film like the artwork and posters, cut new trailers, etc. Our motto is the filmmaker knows best about his film. So we don’t change or re-cut anything unless asked. It’s a collaborative effort between us and the filmmakers, which you don’t get much of after you sign those rights away for 5 years or whatever.”

LAZG: Can you tell me a little about Deimosimine writer and your co-owner Andrew Thompson?

CA: “What can I say about Andrew without giving away any spoilers? I placed an ad for a review writer for LeglessCorpse.com about two years ago (maybe three now) and Andrew responded. His reviews were so well written, articulate, and full of passion tat I asked him to come aboard. He did, and the business relationship grew. I, nor LeglessCorpse, would not be where it is today without his partnership. I mean we are doing a HUGE film festival in a 670 seat historic theatre in October, we are shooting our first original film, we now have a studio, and soon we will have a LC Films video store in the studio where people can buy and rent LC Films distributed Blu-rays and DVDs. It’s pretty amazing what we have accomplished in a short amount of time. None of this would have happened without his help.”

LAZG: So it seems silly to ask, but are you a horror fan?

CA: “Hell yes, I’m a horror fan! I went to all the Fangoria Weekend of Horrors in Los Angeles when Creation Entertainment used to host them. I would follow the filmmakers around as a kid and ask them questions and just constantly bug them. They used to know me by my first name because I would bug them so much, especially the KNB EFX guys. I used to bug the shit out of them, haha poor guys! But yes, I’m a fan of all things horror, weird, strange, creative, and artistic”

“I just find so much more creativeness in the dark and weird side of horror than any other genre, so that’s the attraction for me.” 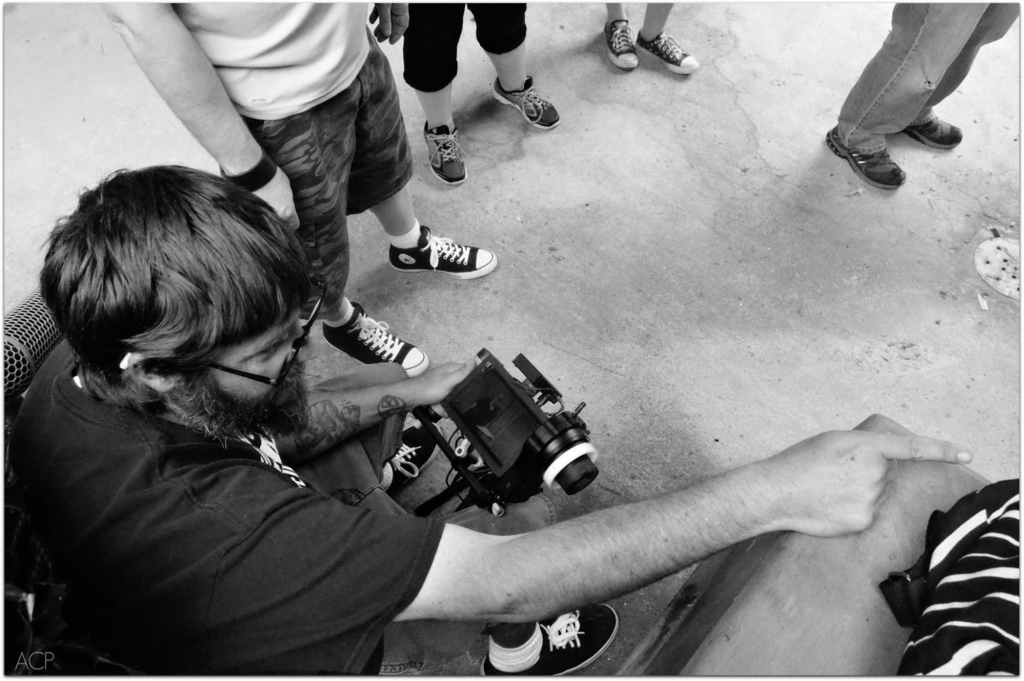 LAZG: What is your favorite horror film of all time and why?

CA: “A Nightmare On Elm Street, because it got me into makeup FX, which in turn got me into filmmaking in general.”

LAZG: Is there anyone that has inspired you in this journey?

CA: “Every independent film, filmmaker, and crew. Anyone who basically will embrace their dreams and try to make them happen no matter how outrageous they are.”

LAZG: So what are your future projects?

CA: “We actually are gearing up for BLOOD DANCERS 2: Full Moon for 2017. It should be a ton of fun and one we are very excited about! It will star Jim O’Rear, Debbie Rochon, and Scott Tepperman. We are also working on some surprises. We also have a huge Halloween Festival coming up, the LeglessCorpse Film Halloween Festival in the historic Princess Theatre in Decatur, Alabama, October 29th-30th. It’s a huge theatre that been around since the 1940s I believe, so we are overly excited about that. More info is available at LeglessCorpseFilms.com/filmfestival”

For more information on the upcoming film Deimosimine go to:

For more information on LeglessCorpse Films or Horror Inside the Box go to: