Interview with Damien Leone for “Terrifier 2”

We talk to writer, director, editor, and SFX wizard Damien Leone about the hotly anticipated — and insanely good — “Terrifier 2”. 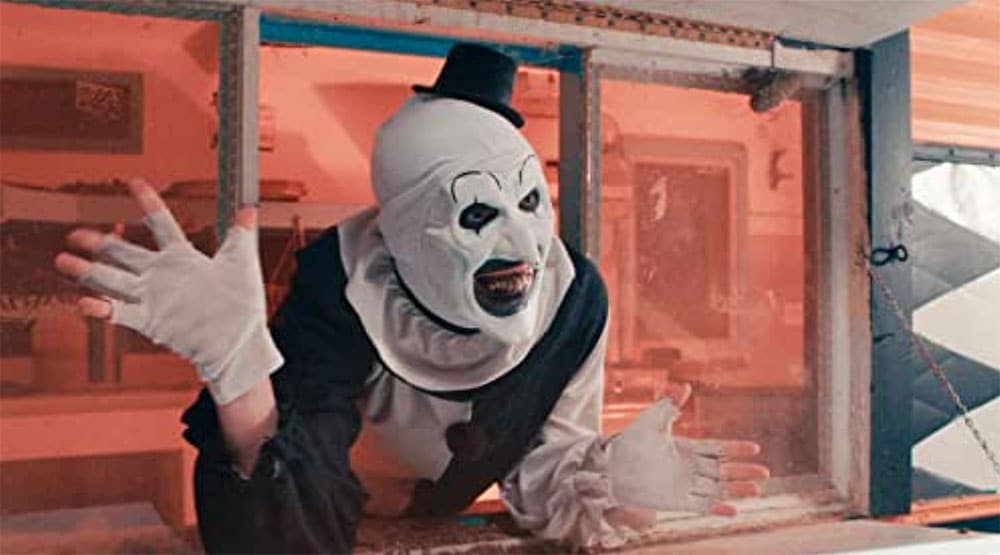 Art the Clown has become a popular icon in the horror world. I see his fan art everywhere. Many of my horror friends have his face tattooed on their bodies, and meeting him in person (David Howard Thornton) was a highlight for this writer! I just finished watching Terrifier 2, and I am still reeling from the experience. I absolutely loved every nightmare-inspiring moment!

This film honestly is not for the faint of heart, but for a slasher lover like me, it was pure gold — or, should I say, pure blood? It was also funny in a way you almost feel guilty about since you know he is a serial killer. But with how he toys with his victims, or even in his playful scene in a Halloween store trying on sunglasses, I couldn’t help but smile and enjoy myself.

Director-writer, SFX genius, set/prop builder, and editor Damien Leone created all the brutal and gory effects in the original Terrifier and cranked it all up considerably in Terrifier 2.

It may be over the top but in such an inventive and amazing way.

Leone has created an unforgettable character with Art the Clown. Evil clowns may be a dime a dozen, but Art joins the infamous ranks of a select sinister few, including Pennywise, who is truly enduring and memorable.

Art is so goofy and wacky, even when he is ripping people apart.

It’s a real testament to David Howard Thornton, the man behind the mask, and his talent for improvisation and physical comedy.

Trying to review this film without spoilers is almost impossible, so I’ll offer up a short personal synopsis. Then you can jump into my amazing interview with the film’s brilliant creator, Damien Leone.

Terrifier 2 begins immediately with the brutal antics of the magically reincarnated Art the Clown (David Howard Thornton). He shot himself at the end of the first film, but he is now apparently supernatural. It’s Halloween in Miles County, and he is on the prowl.

Somehow connected to siblings Sienna (Lauren LaVera) and Eric (Griffin Santopietro) through their deceased father, he finds and stalks them with grinning passion. He also finds his way into their dreams.

LeVera and Santiopetro did a fantastic job and were quite believable in a film jampacked with complicated special effects. I loved their chemistry and was fully invested in their plight. I loved watching others get slaughtered, but I rooted for their survival. Sienna absolutely kicks some clown ass, and I cheered her on! We also get a few nice cameos from horror favorites Felissa Rose and Tamara Glynn. 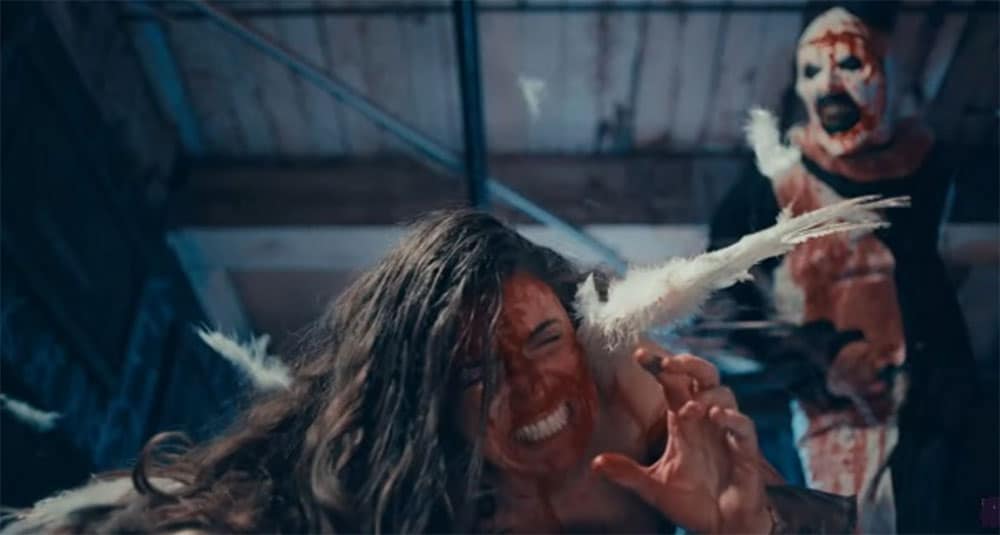 I didn’t question everything the actors did like I do while watching most horror films.

I loved the SFX to pieces! Damien Leone is so invested in his makeup art. From the perspective of an SFX artist myself, I was blown away. I also know this film was made with a super tiny budget and a lot of blood, sweat, and tears. It looks like a much higher-budget film.

The love and commitment put into the making of this film are apparent at every turn.

I rank Art the Clown up there with all the other iconic slashers, and that’s saying a lot. Freddy, Jason, and Michael, you have a new partner in crime; Art is in town. If he’s smiling, someone’s dying!

I feel this movie is above and beyond the first Terrifier, which doesn’t usually happen with sequels. I really hope there is a Terrifier 3 to come! Please enjoy my interview with Damien Leone. He was so wonderful to talk to. 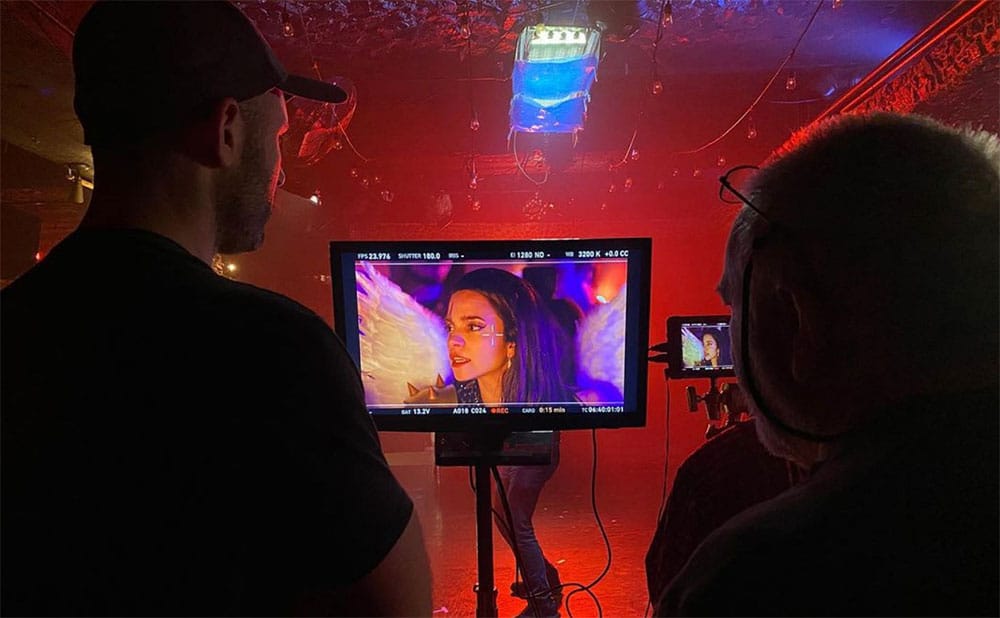 Vicki Woods: Hi Damien! I am so excited! I am a huge Terrifier fan, and I just finished watching Terrifier 2. I don’t know, but maybe Terrifier 2 needed a bit more gore. It really isn’t very bloody! Ha Ha.

VW: As an SFX artist myself, I was so impressed with your work. Even a hardcore slasher fan like me had to look away a few times. Art the Clown is brutal! You personally did most of the SFX correct?

DL: I did. Me and my producer Phil Falcone. Phil is not a makeup effects artist, but he wanted to be by my side and be my assistant on Terrifier, so I taught him as much as I could, like how to make molds and mix silicone. He even sculpts with me a little bit. He was my guy on the set of Terrifier 2 the whole way.

He didn’t really want to do all that work because there are quadruple the effects in part two than there were in part one, so I tried to hire another makeup company to help and have them do like 40% of the work.

Unfortunately, about a month before shooting, they dropped out because we couldn’t come to terms with a budget. So we said, “OMG, what are we going to do now?” 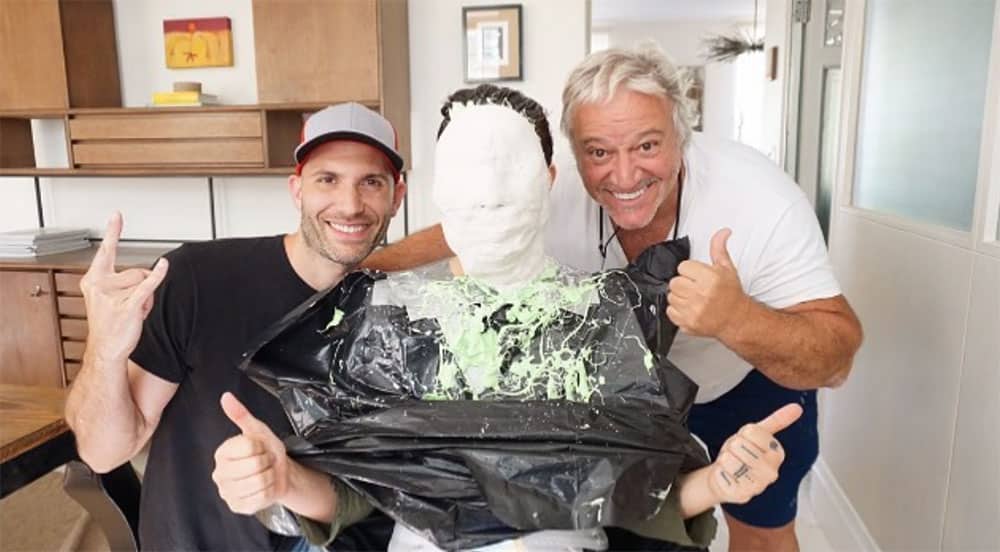 We postponed, but Phil said, we just have to start shooting. We would shoot scenes requiring makeup, and if we didn’t have the makeup, we would take a week or 5 days off. Then he and I would make the prop and then go back in and shoot those scenes. So, for 99% of the movie, it was Phil and me.

There were a couple of days when I had an assistant come in. She would apply Art’s makeup. She did that 3 times, and she helped me paint some body parts. Her name is Alana Rose, and she did a great job. But basically, for the whole 2 and a half years of working on this, it was really Phil and I doing everything.

VW: How does it feel to finally present Terrifier 2 to the public after all that time?

DL: A lot of mixed emotions and a lot of relief. A part of me still doesn’t believe that it’s actually coming out. And a part of me is very anxious. I’m a little nervous, I’m not gonna lie. As a filmmaker, especially a writer/filmmaker, when it’s really all just you up there, you are very vulnerable. The things that work are great. And the things that don’t work, well, that doesn’t feel too good. But