Interview with an Icon: Marcus Koch

We talk horror and filmmaking with industry legend Marcus Koch, a prolific and highly sought after SFX wizard and director with a gift for gore. 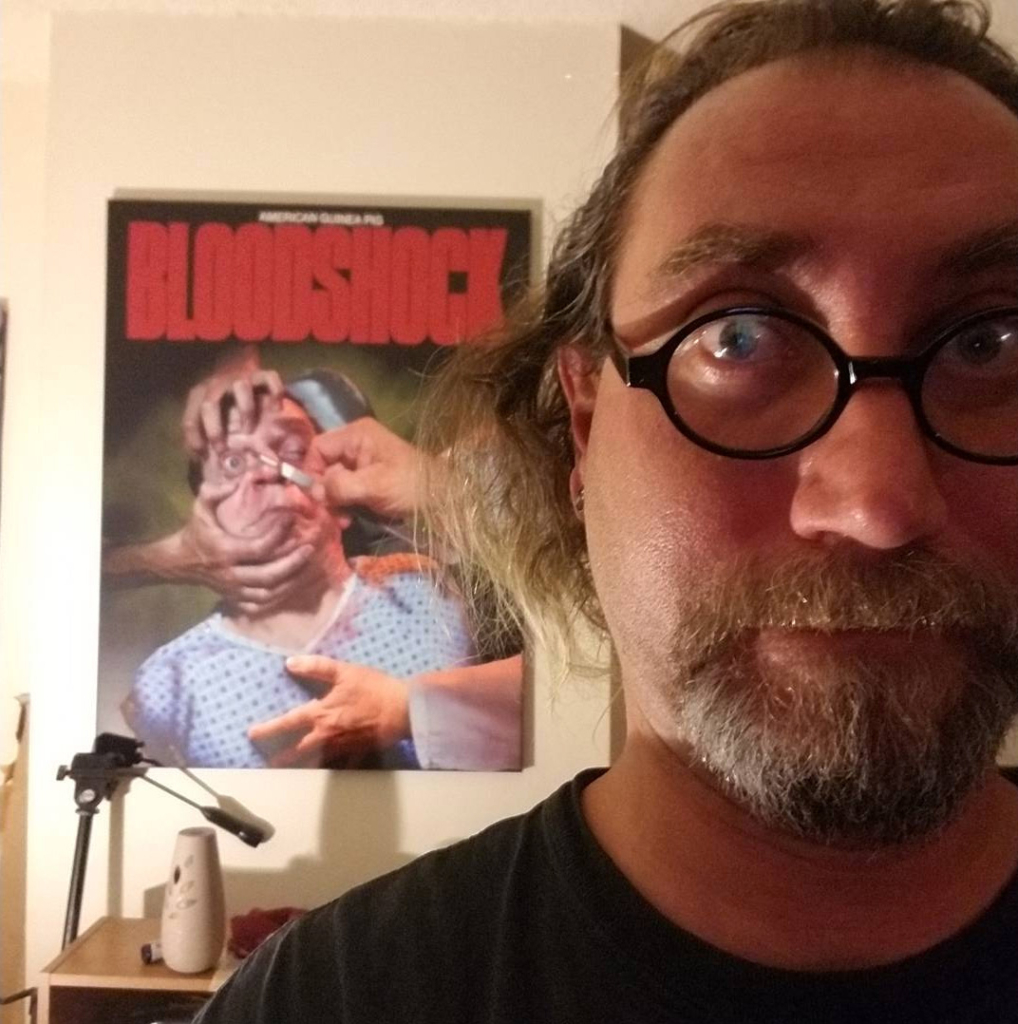 If you’ve seen any of the films in the American Guinea Pig series from Unearthed Films, then you’re familiar with the work of Marcus Koch. Also on his resume is Frankenstein Created Bikers, We Are Still Here, Fell, 100 Tears, Circus of the Dead, Bloody Bloody Bible Camp, Mohawk…and the list just keeps going.

As one of the leading pioneers of practical effects in underground and independent horror, Marcus and his company, Oddtopsy FX, are busier than ever and have a ton of exciting new projects in the works.

Ever since our first meeting at the 2017 Mad Monster Phoenix, I’ve wanted to know more about his work. Despite his extremely busy schedule that keeps him on the road and away from home, Marcus graciously agreed to an interview. 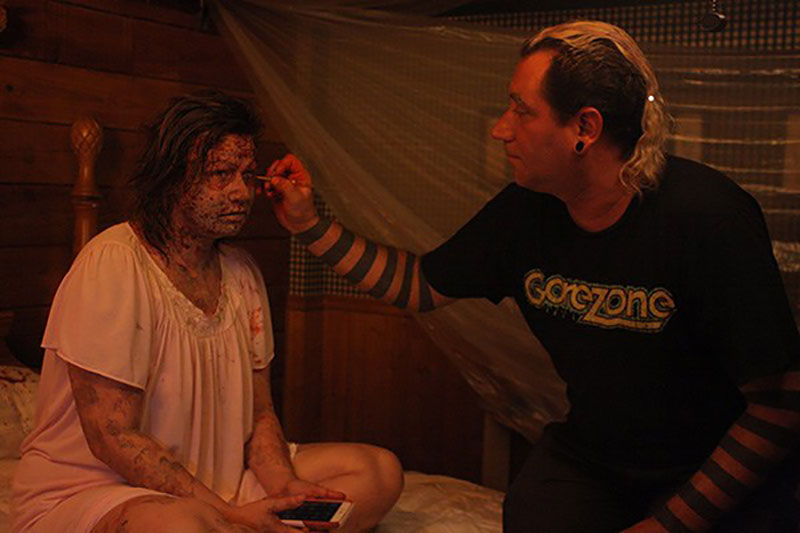 Tiffany Blem: You have quite an impressive list of almost 100 credits for special effects. How did you get your start?

Marcus Koch: I just fell in love with horror films, from a very young age. My parents took me to the drive-in for my first horror movie at age 3 (I don’t remember the experience, but I’m told that I jumped out of my skin, lol).  So for whatever reason, I was hooked on horror films growing up. I  would always ask my dad, “How did they do that?” when someone would lose a limb or get decapitated. His answer was “Special effects.” I knew early on that the actors were ok, because I’d see them die horrible deaths in one movie then die again in another. I knew there was something to it, and I wanted to know more about these “special effects”.

At age 7, I had made up my mind that that’s what I was going to do with my life,  focus on being a special effects artist.  My dad got a video camera, a big clunky VHS camcorder, and I started making my own special effects test make ups — using flour and water, paint, gelatin, and ketchup with red food dye as fake blood. Then I’d video tape the FX to see how they worked on camera. 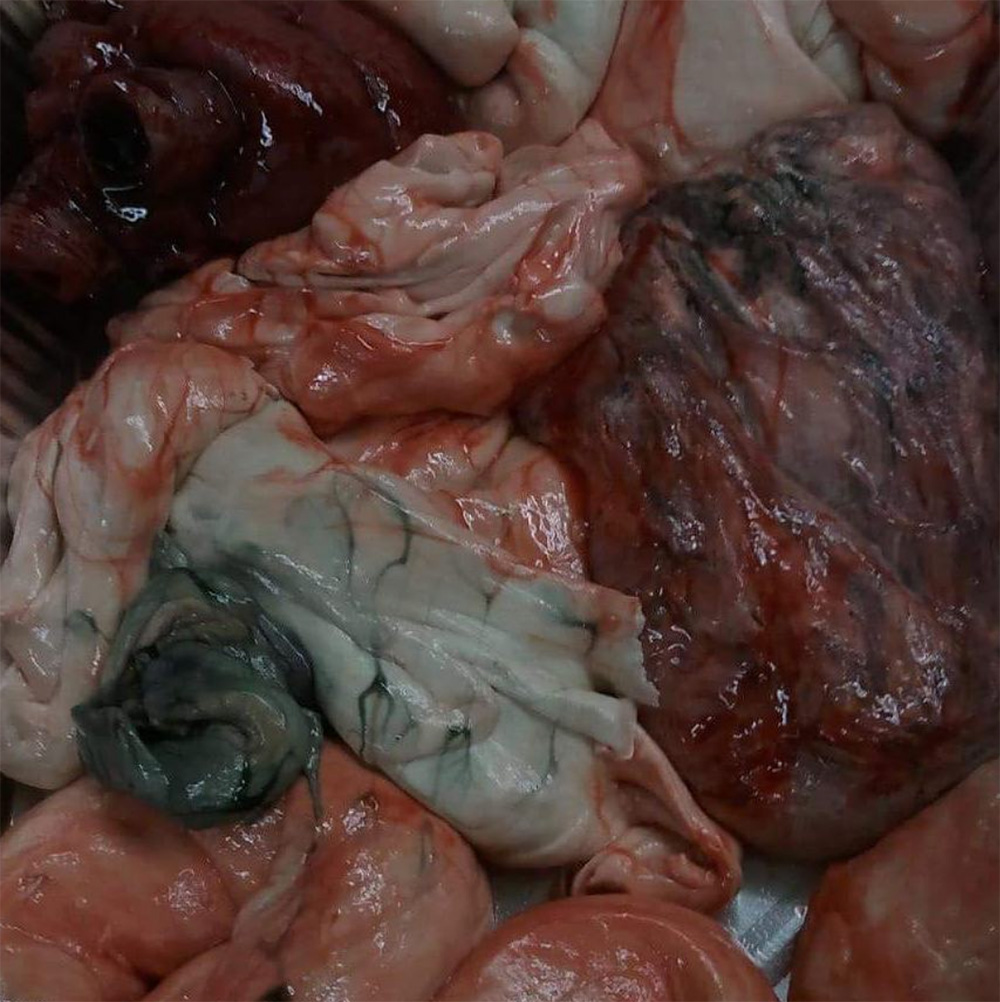 Over the next few years,  I started to write little scenes to try out new FX gags, and I would have my neighborhood friends be my guinea pigs…(cough, cough)…I mean actors. I would experiment on them and make them do horrible things. As I was finishing up middle school, I decided it was time to stop making just scenes or short films and actually try and make a full story line, with a bunch of new FX gags I wanted to try out.

So my first movie was made called White Massacre. It was 30-minutes long. Then my first year in high school, I decided to try and do something even gorier. I was getting better, and working with newer materials, so I made my second movie. That was 60-minutes long called LUNCH MEAT.  In 10th grade, I set out to make my first full feature  of 90 minutes,  with a large cast, lots of locations, and lots of gore. It was sort of a time traveling vampire film called Bad Blood.

I was filming on nights and weekends thru the rest of my high school days. (Sadly, my focus was on finishing my movie and not doing school work, so needless to say I failed my senior year.)  It was a learning experience for sure. took 3 years to finish it,  and it’s really a terrible movie. But I learned so much trying to make it, what what I had to deal with along the way. I was bound and determined to finish it…and I did. No regrets about failing high school, though. 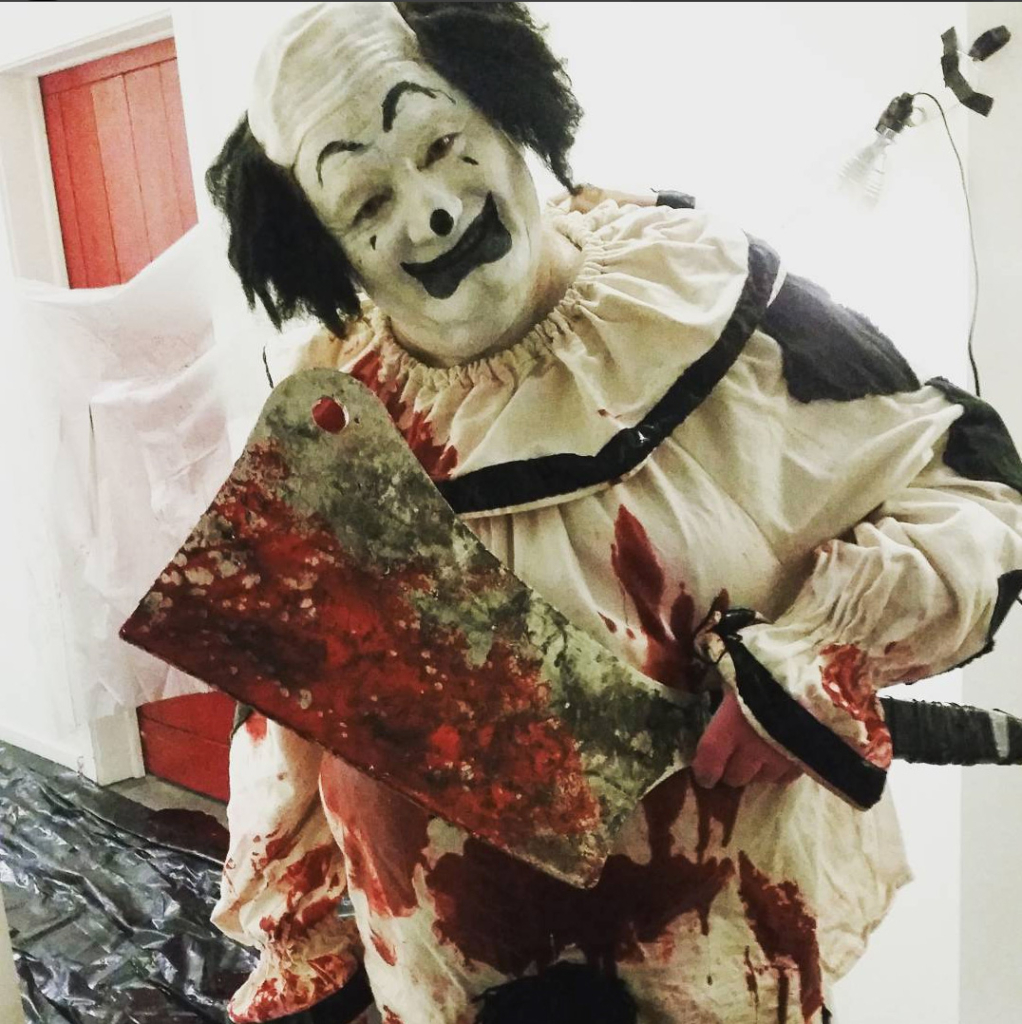 TB: You have a very small list of acting credits as well, most notably being the ticket taker in Billy Pon’s Circus of the Dead. Have you thought about doing more acting?

MK: Occasionally I’ll get asked to play a bit part, or someone in the background of a scene. Sometimes I’m just a shoulder ( I’m an amazing shoulder actor). I’m very terrible on camera, and I freeze up. So it’s not something I could ever do as a profession. But I do like doing corny bit parts. I’ve also been in full drag in a few things, lol. Thankfully, only one of those times is in a film that got released. And I won’t say which one!

TB: What was your favorite film to work on, and why?

MK: Always a tough question. I’ve had some amazing experiences on some sets where everything and everyone moves just like a well-oiled machine. Theater Bizarre, the segment SWEETS, was a prime example of a smooth shoot. It was almost 60 people on set for a 4-day shoot. Everything just ran smoothly, and at the end of the first day, it was like we had all been working together for months. 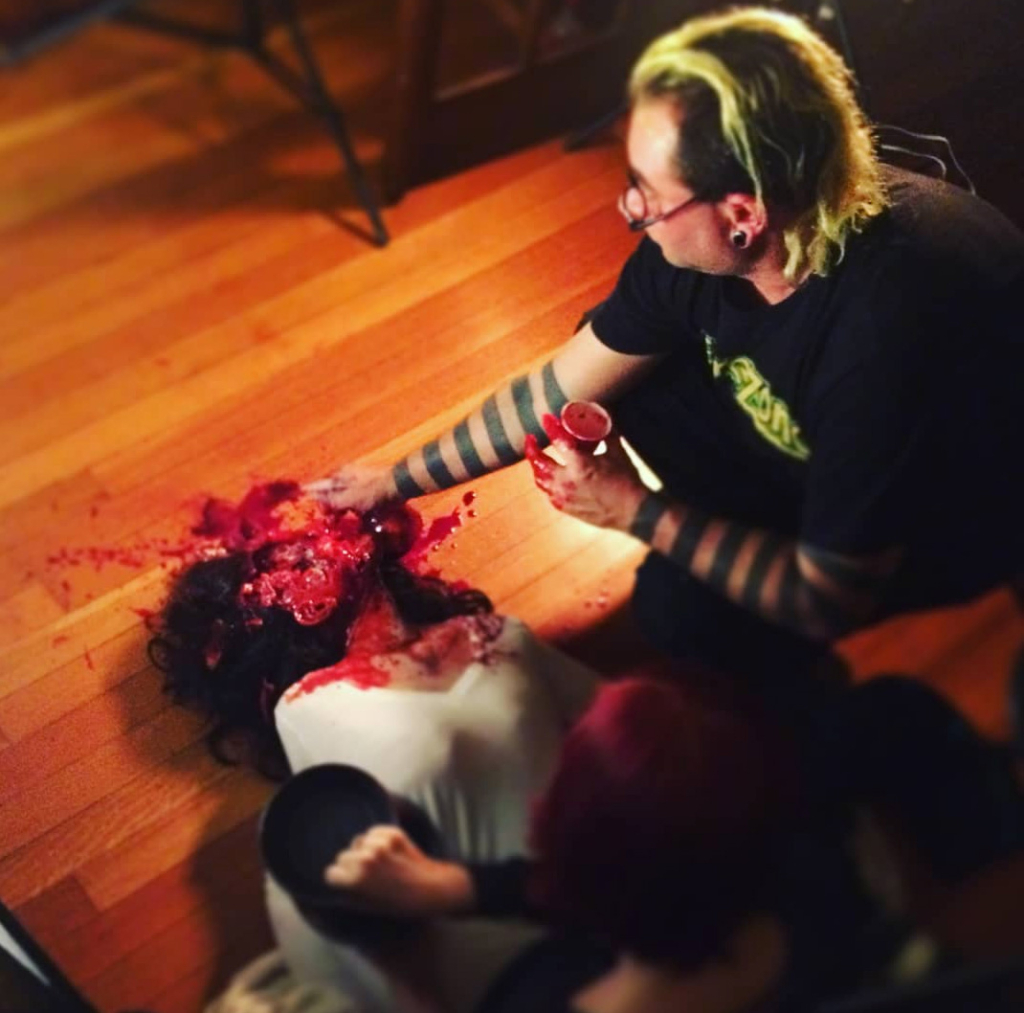 My other favorite film was Fell. It’s a very long story about how FELL  came into existence. It was a horrible, problematic, nightmare of a shoot (on a completely different film). I had fired my lead actress, 10 days into a 14 day shoot. So for the remaining 3 days, we made a brand new film, which became FELL. It was the proverbial “Phoenix that arose from the ashes.”

FELL was amazing because of the friends who were with me. They endured the first 10 days of the other film we were trying to make. Once we had the idea for FELL, we literally shot in the remaining 3 days. Then we had one day, two months later for pick ups and inserts/flashbacks. I am most proud of FELL. I wish we had a bigger budget. I wish we had a better camera to film on. There was so much stacked against us. But, if you can overlook poor video and audio, it’s such a great mind fuck of a movie. 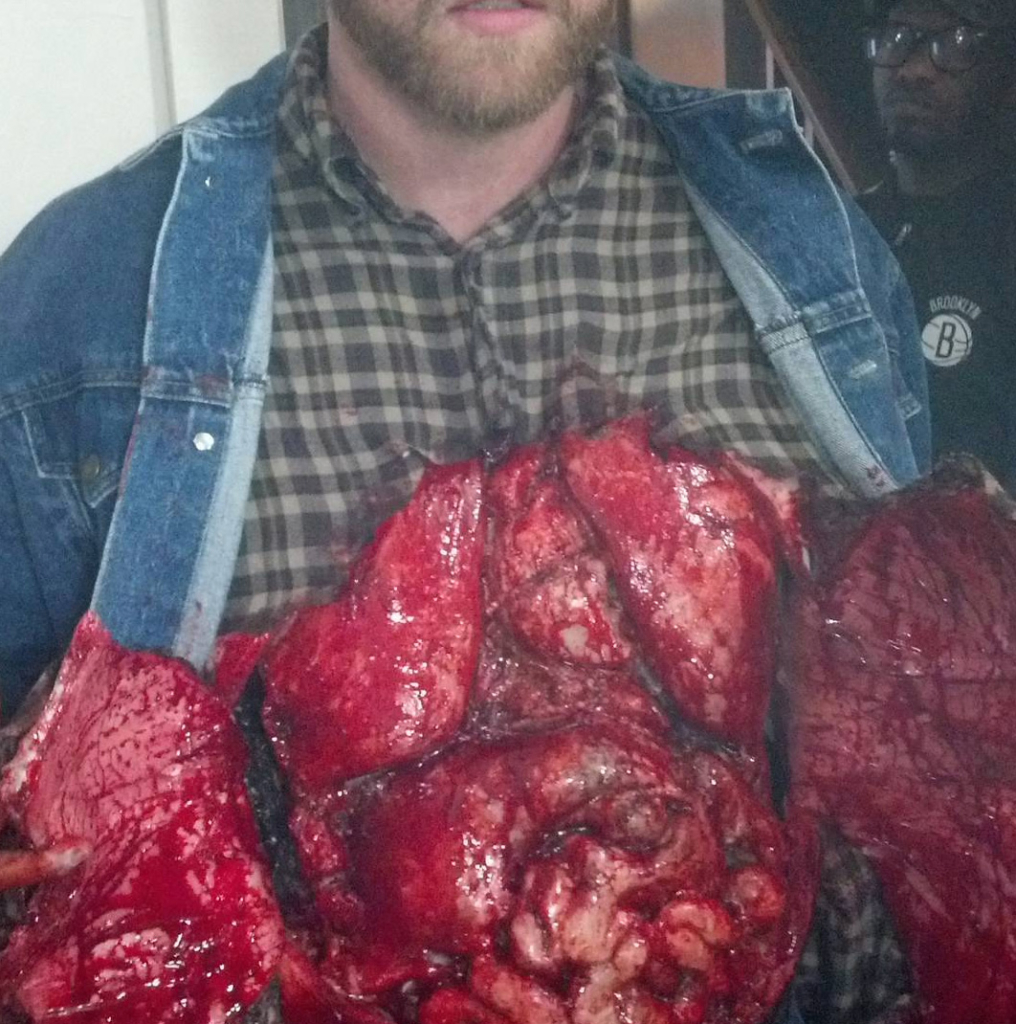 On the set of “We Are Still Here”

TB: You are very well known and sought after for your use of practical effects. What kind of advice, or words of wisdom, can you give for anyone wanting to get their start in the business?

There are thousands of video tutorials now days. I didn’t have the Internet as a kid learning all this stuff the hard way, by trial and error. But if you have the money to go to a school, you have the money to buy materials. Materials are expensive. But the only way to learn is to use them, see what they do, see what they don’t do. It’s all a very trial-and-error way to learn. 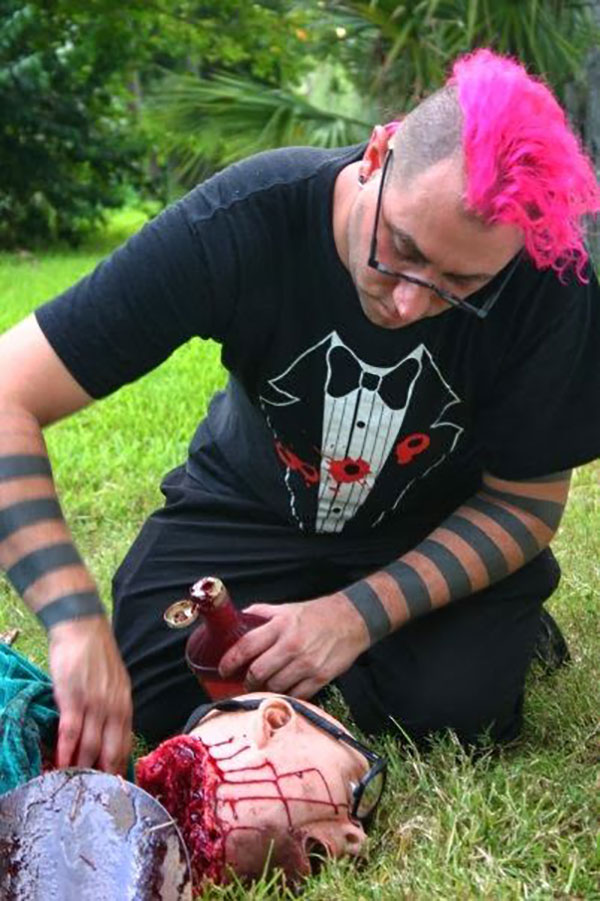 I think failing at something is the best way to learn. Experiment on friends. Take life casts of people you know. Sculpt. Learn about mold making. Teach yourself how to make prosthetics,  and how to apply them. All of this information can now be found for free online. Use it, read up on it, join a local haunted house, or try and find out who is making low budget movies in your town.

Get involved. Little by little, each step you take is a step closer to another open door — to bigger and better things.

TB: You sometimes wear a director’s hat as well, making such goretastic films as American Guinea Pig: Bloodshock and 100 Tears. Can we expect to see any other directorial endeavors from you?

MK: I hope so. I love directing, probably more so than FX. I have a few other stories floating around in my head that I want to tell to the world. So hopefully it will happen. 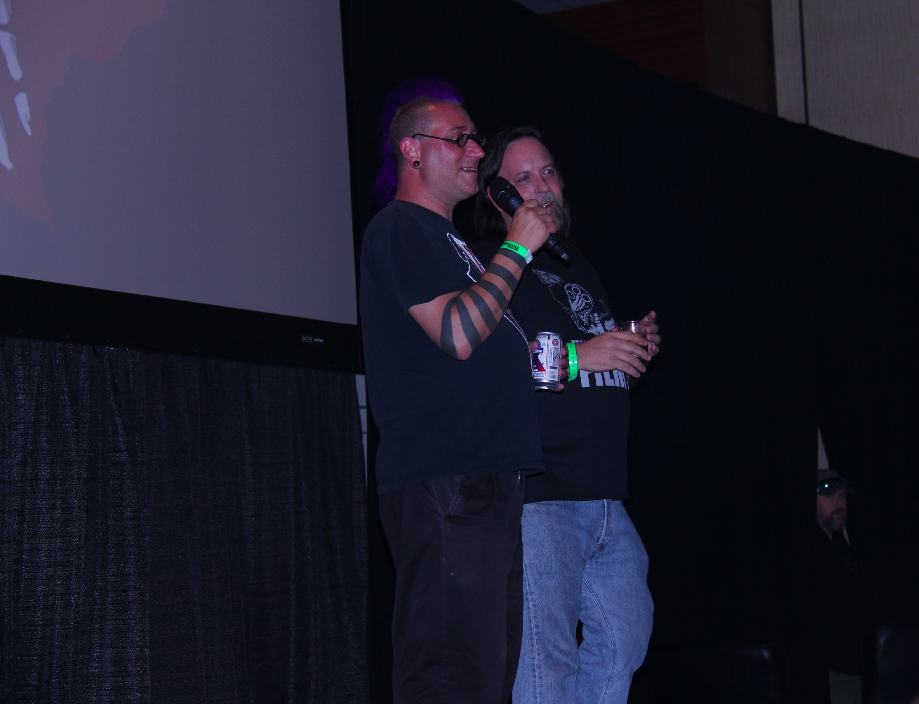 TB: What’s next for your company, Oddtopsy FX?

MK: As of this writing, I just finished working on Johnny Z, a kung fu zombie film by Jonathan Straiton, who directed Night of Something Strange. Next, I’m rolling into Dustin Mills’ newest insanity project, his biggest film to date, Slumber Party Slughterhouse!! It will be total insanity — and lots of nekidness! It’s not so much a gore film, but more of a gory cartoon/mockumentary about a slumber party where things go horribly wrong.

TB: I read in an interview with you that the higher the resolution the film is shot in, the harder it is to make the effects look believable. With the influx of films being shot in higher resolutions these days, what do you see for the future of practical effects? 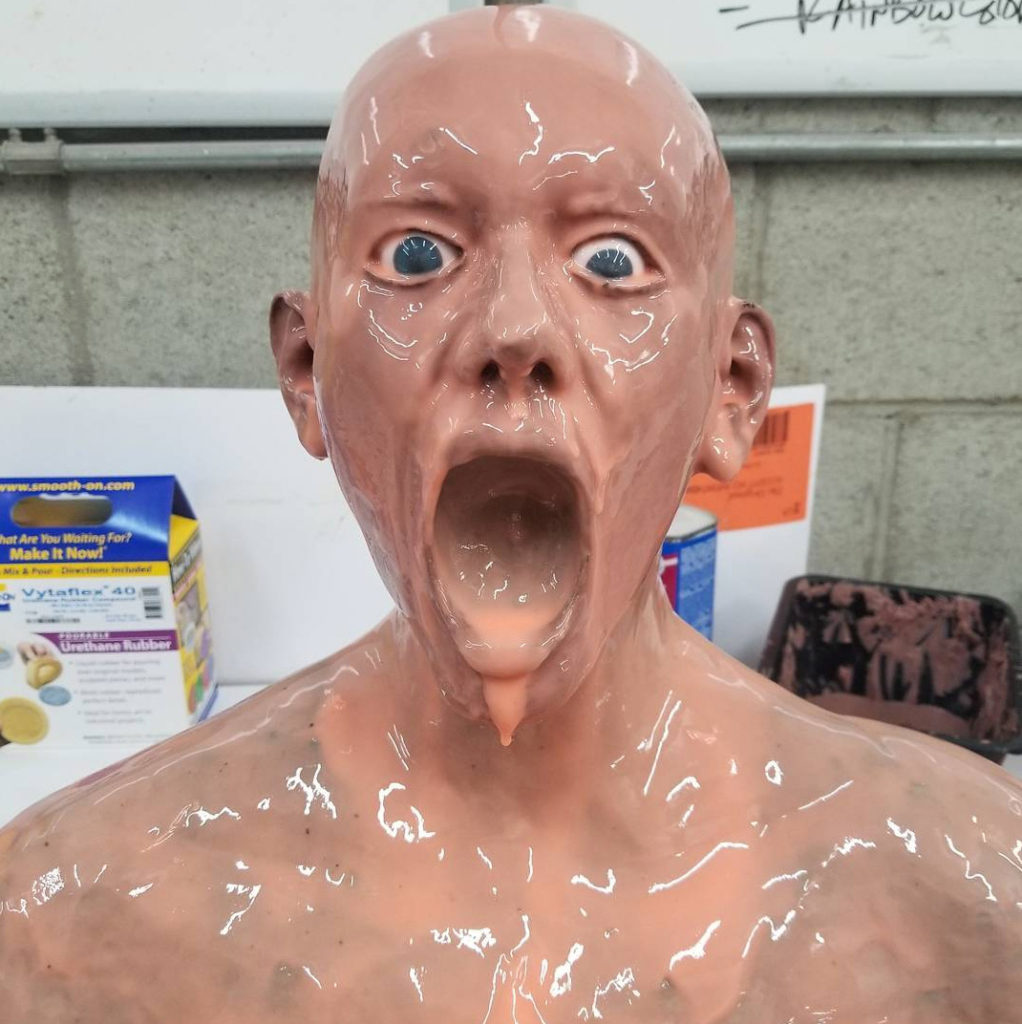 MK: UGHHH, it’s getting harder and harder. 4k, 6k…soon to be 8k cameras and 12k cameras. The detail they pick up is insane, which makes blending edges on prosthetics harder. It’s getting harder and harder to hide. Or maybe I just see it now because i know what to look for. Go look at the opening scene of Alien: Prometheus. The makeup is so wonderful, but…you can see the seams and edges from the prosthetic on the actor.

It’s going to get harder and harder. Also, it’s getting harder and harder to fight for practical FX, as producers really want all digital FX. They can have better control over things. They’d rather spend tons of money in post then to spend money up front and do things practically. It’s weird, and I can’t wrap my head around that logic.

But I don’t think practical makeup is going away anytime soon. 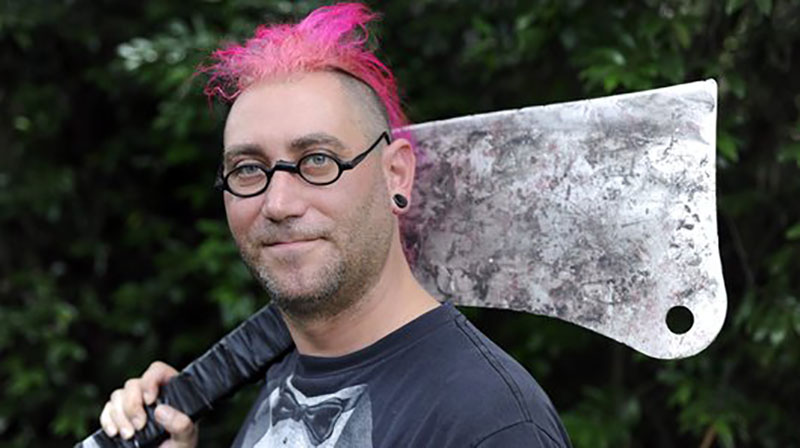 MK: Such a hard one, as I love so many movies. As far as movies that scared me…Poltergeist scared the shit outta me as a kid. That clown did me in. But as far as recent films go, it’s hard as I feel so desensitized known how “jump scares” work. However, I think the one film that really gave me anxiety while watching it was MOTHER. I don’t want to go into what or why, if anyone hasn’t seen it. It’s not really a horror film, per say. But there is a sequence close to the end that had me on total edge.