Interview With The Icon: Jackie Kong

We conclude Women in Horror Month by talking gender inequality and the role of women in the genre with inspiration and cult filmmaking icon Jackie Kong.

In 1987, unbeknown to most at the time, a cult classic was born and shared with the world. It was a strange, unique, enjoyable, ultra low budget, blood filled yet fun flick that eventually became so beloved, it earned the right to become a member of the coveted Vestron Video Collector’s Series.  The movie is Blood Diner.

Jackie Kong managed to create an endearing entry into the annals of horror and has always been a vocal advocate for more women in film. These are just some of the reasons why I felt compelled to talk to her during this 9th Annual Women in Horror Month. 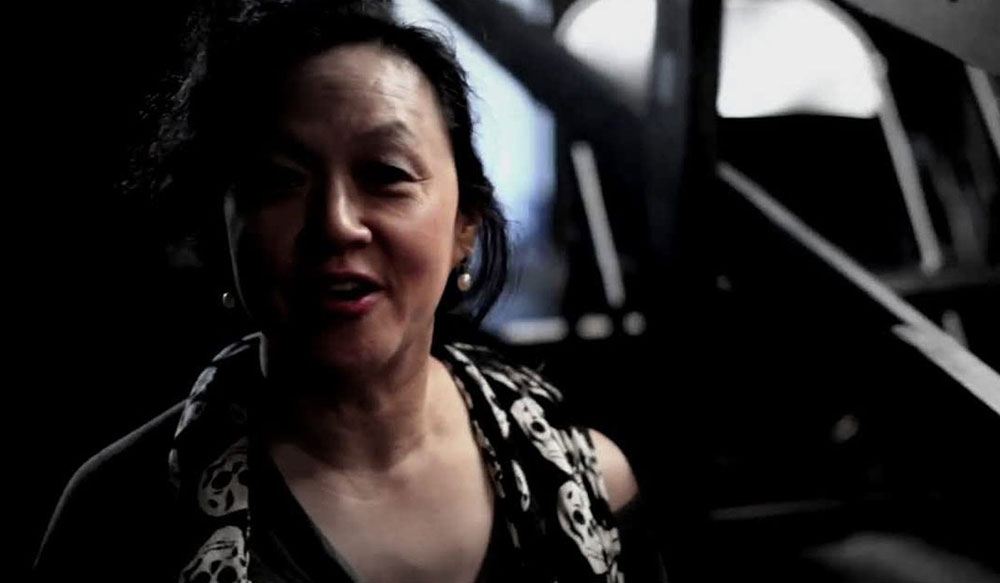 I’ve always been a fan of Blood Diner. It was one of the very first horror films I discovered as a kid. When I became older and learned it was directed by a woman, my love for it grew. I first met Jackie at the Etheria Film event held during Days of the Dead L.A. in April of 2016, where she was helping support fellow female filmmakers (Kong was awarded the 2016 Etheria Inspiration Award for being an amazing genre director).

She was awesome, and it was a highlight of my trip to be able to meet and chat with her. Kong has an energy about her that’s very pleasant and positive, and it can easily rub off on you. When I saw her again, it was on the first stop for the Blood Diner Tour on October 1, 2016, in Austin, Texas, and she brought that same vibe. 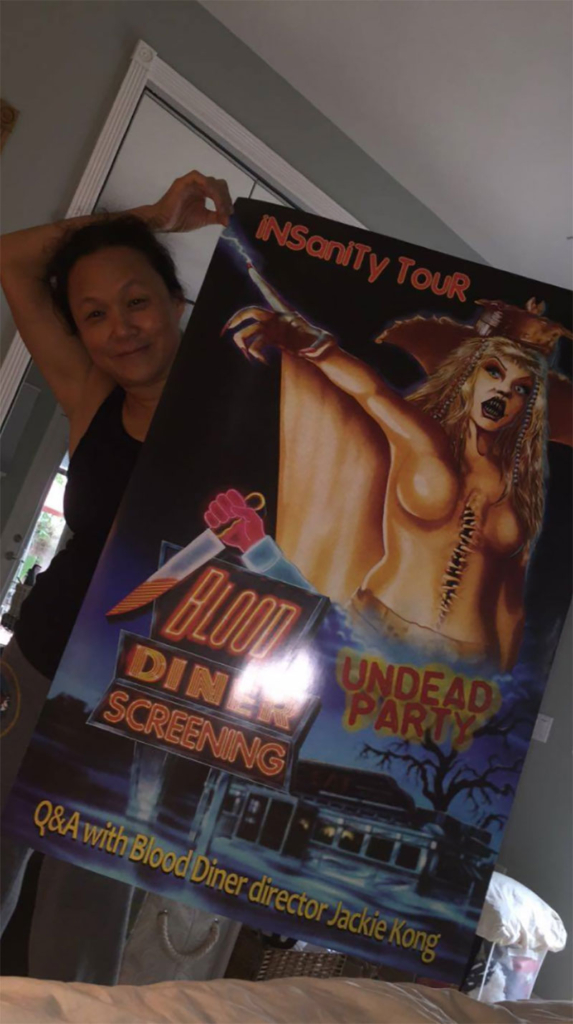 The Spider House Ballroom and Cafe, where Blood Diner was being screened, was full of fans waiting to meet her and get items signed. Jackie was so thankful, happy to greet everyone who showed up to support her. I got a little choked up there, overhearing how excited others were to have been able to meet her, how much they loved the film and the opportunity to experience Blood Diner with fellow fans, how they couldn’t understand why it’s been difficult “for someone like her” to get work.

It must be beyond validating for someone like Jackie Kong to encounter fans who appreciate her contributions to moviemaking and want to see more from her after all the nonsense she has had to endure. I’m truly honored to spotlight this amazing talent as part of Women in Horror Month. 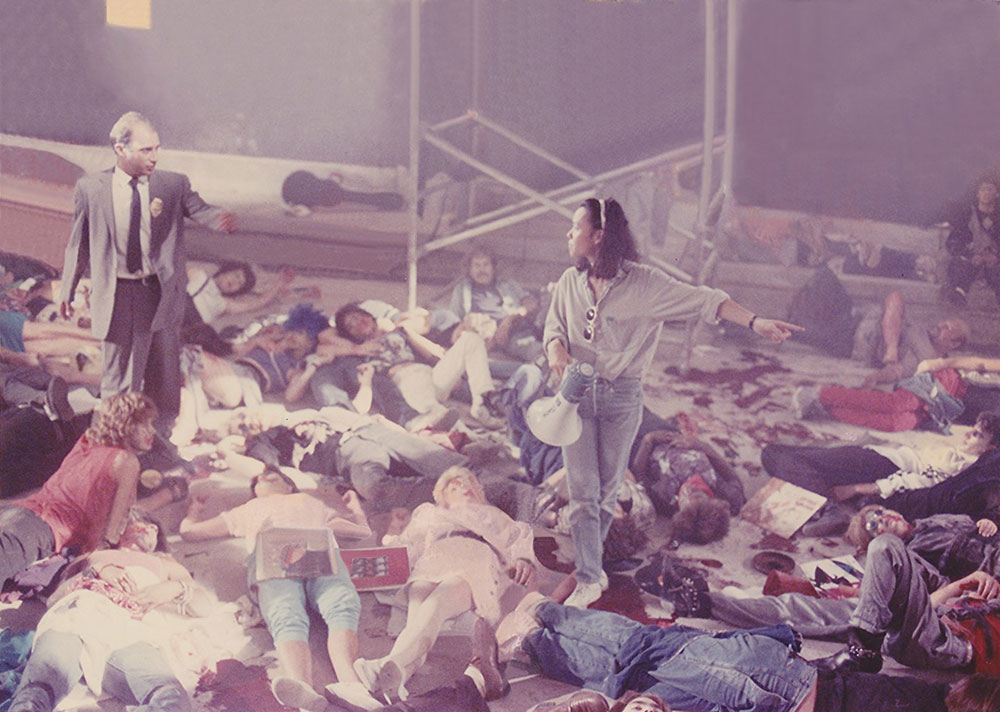 Danni Darko: I wanted to say thank you again for your time and helping us celebrate WiHM with you!  How does it feel to consistently be included on ‘Essential Horror Film’ lists, not just for Women in Horror, but for the genre in its entirety?

Jackie Kong: They say the film’s damn good, so it’s always wonderful to get recognition…It means the film is timeless and delivers to Horror Aficionados, and those fans (are a tough audience), who have seen everything.  I’m proud it transcends the genre, so those who are not into horror are also thrilled and captivated too, shocked and entertained as well.  I really defy the audience to guess what will happen next.

DD: Your first film, The Being from 1983, wasn’t particularly well received, yet you were not deterred to continue making films. What helped you remain so focused and resilient? 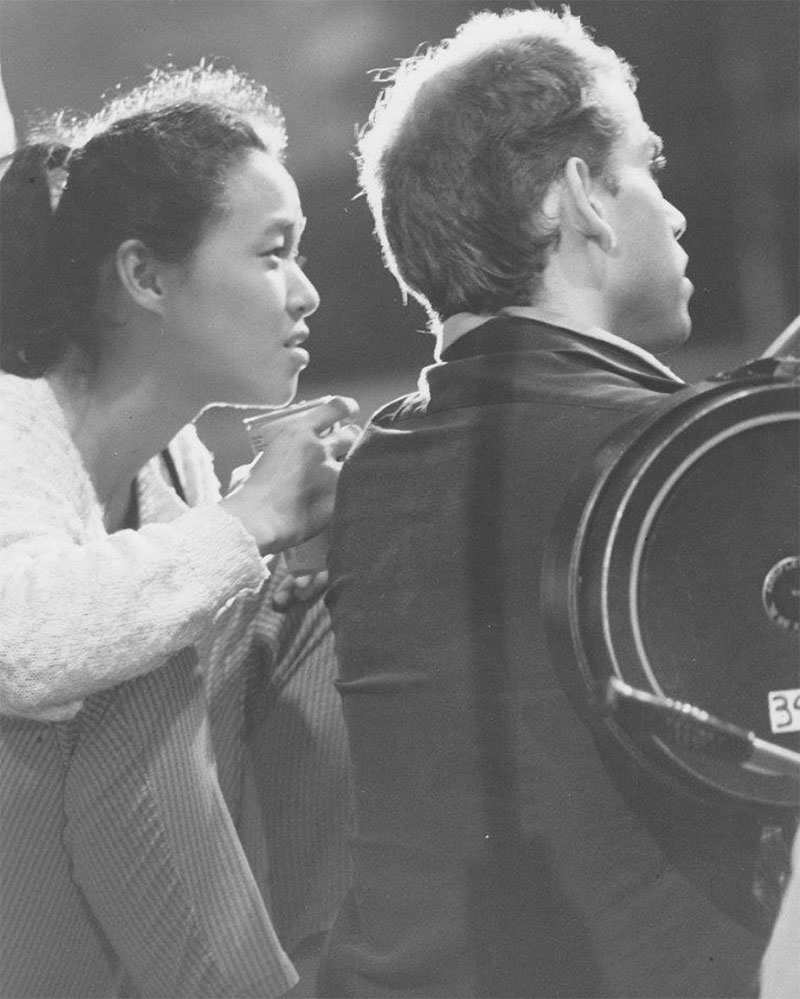 Jackie Kong on the set of Night Patrol

JK: My sense of humor and belief I can deliver a film that can make you feel strong sensations. I did that with Night Patrol with no money. Vincent Canby, the toughest NY Times critic said it, “Made me laugh even though I didn’t want to.” Not an easy feat. I like the challenge.

DD: What were the challenges you faced, if any, being a female filmmaker?  Any advice for those that wish to follow in your footsteps?

JK: Every possible obstacle, since I was a young woman of color in a white, male dominated field. I was considered quite a weirdo. No one knew what to make of me. I couldn’t be categorized. They became confused by the gender and race issues I presented. I had to be crazy to tackle it, but I think when I work, my crew and cast see that I know what I’m doing. They follow my lead wholeheartedly. 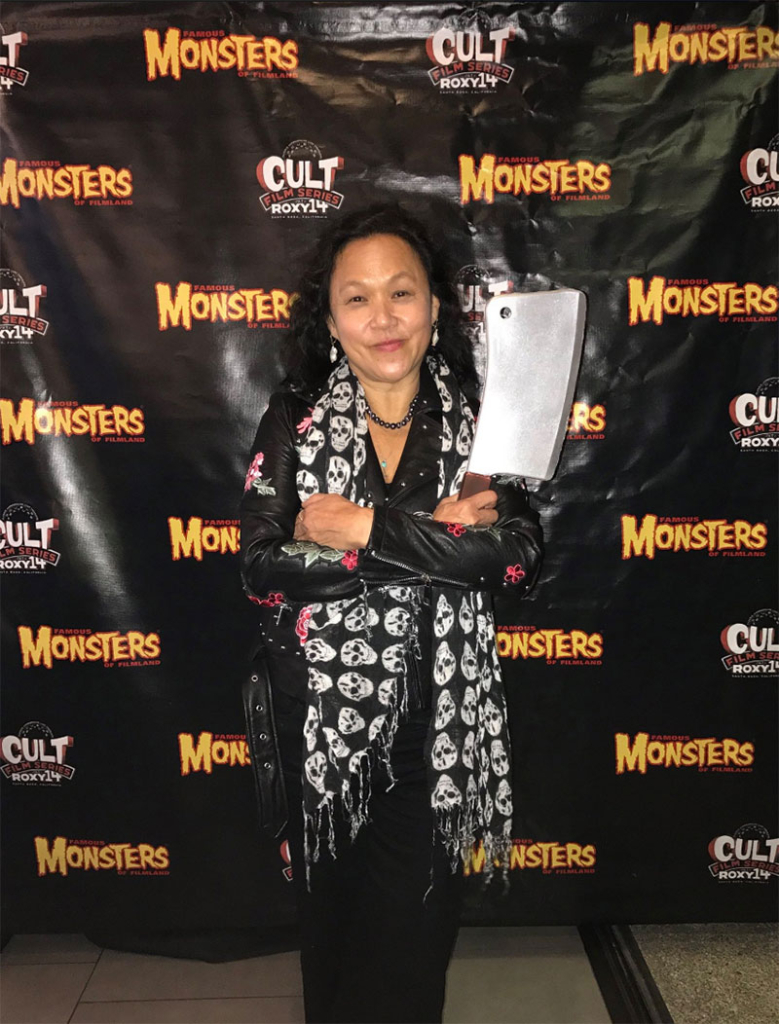 Everyone wants to be a part of something good. The key is making something REALLY GOOD. It’s a waste of my time otherwise. Fight for what you need, never compromise, but find clever ways to get it done right.

DD: You have mentioned before that you make it a point to hire as many women as possible on your sets.

JK: My films have always had women behind the camera in key positions. They know their stuff, and yes, I’m working on two series projects now — female driven both in front and behind. Let’s see if the powers that be will support our efforts to include extremely qualified and kick-ass women.

DD: What filmmakers do you enjoy? Are there any ladies in the genre you are excited to see more from? 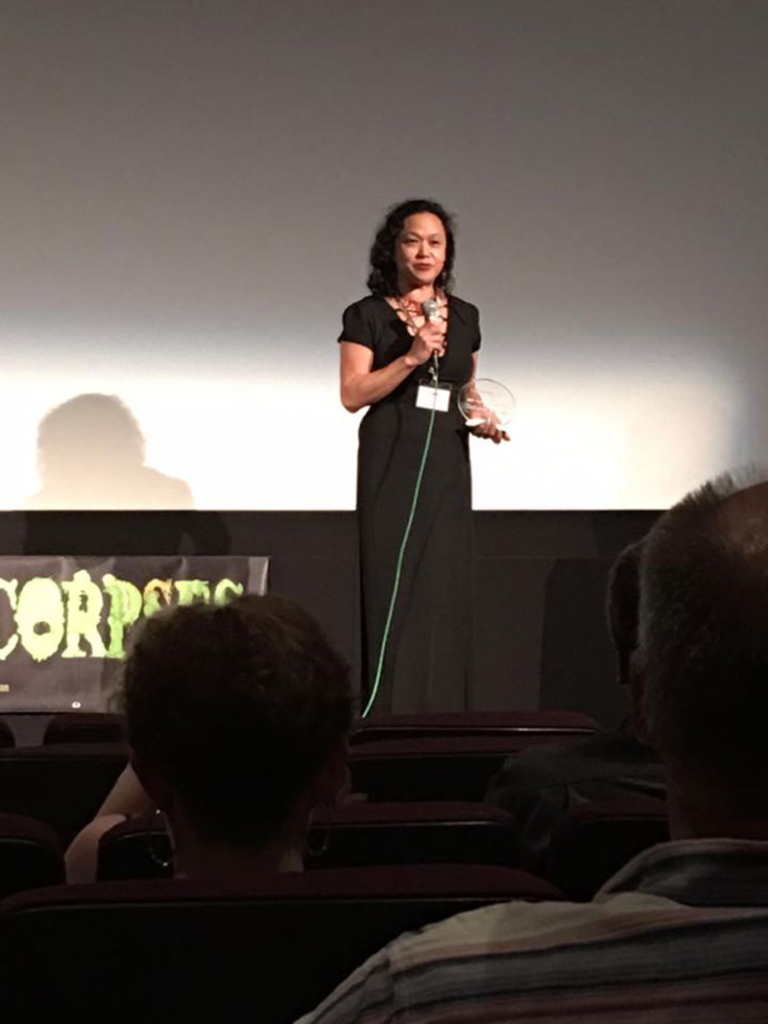 JK: One of my idols has always been Lina Wertmuller, and I had the chance to meet her in Rome. I like both the Kathryns – Bigelow and Hardwick. These women, including myself, “outdid the boys!” with our films. We had to make our own path. There was no previous road.

DD: What are you currently focusing on? Projects? Passions? I definitely hope you are still interested in creating a female-driven horror series similar to the likes of Masters of Horror.

JK: It is one of the series I’m developing, but it’s been a really hard sell. Imagine only 4% of films are directed by women, and there seems to be a strong bias against women in horror. There is a perception that we cannot do the job.

I outdid the boys with Blood Diner, but instead of giving me opportunities in the industry, people thought I was a guy. Nobody knew what to make of me. The film played world-wide, dubbed in 5 languages, yet it would be a shock when distributors would meet me. 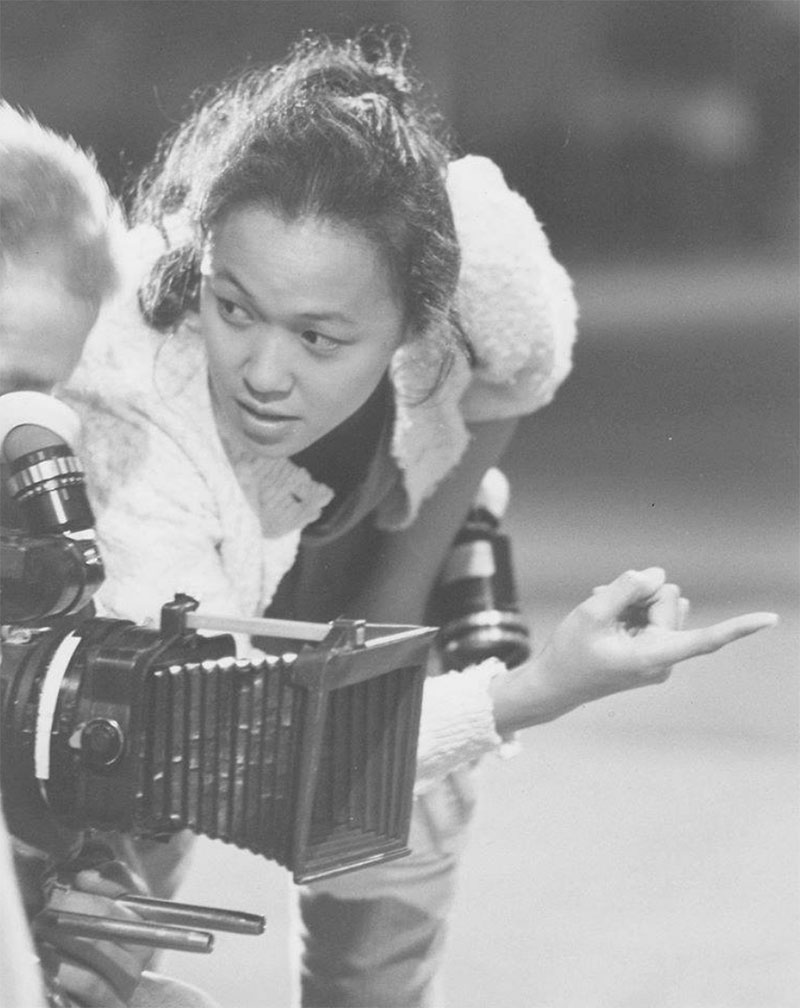 There needs to be a change in perception, that women can do the job and then some…but I have been chiseling away at that stereotype. It’s really slow going (because of the unspoken bias that decision makers need to acknowledge and tackle with actions, not lip service). But I’m confident as we speak up and make our voices heard, times will eventually change.

So far, in 30 years, I have not seen any significant change to include women. We should start a “Me Too” movement for all the women who are more qualified filmmakers, but never get the job. Happy Women in Horror Month!

DD: Happy Women in Horror Month to you too, Jackie.