Reel Review: Circus of the Dead

John Wayne Gacy once said, “Clowns can get away with murder.” and CIRCUS OF THE DEAD, from Texas’ own Billy Pon, seeks to back up this bold statement. 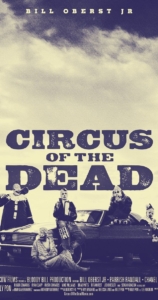 Making a long, considerably impressive run at some renowned Horror Conventions and Film Festivals, the cast and creators of CIRCUS OF THE DEAD made numerous fans and friends along the way. The official first trailer dropped way back in April of 2014, creating significant buzz and anticipation among Horror fanatics. If you were one of the lucky ones, you may have caught this indie darling on the convention and film fest circuit. If not, now is your chance to experience the film everyone is talking about.

CIRCUS OF THE DEAD was written by Lee Ankrum and co-written and directed by first time filmmaker Bloody Billy Pon. Despite this being Pon’s first foray into feature filmmaking, he has, for many moons now, been specializing in massive haunted attractions in deep West Texas. Many have traveled hundreds of miles to experience the detailed and immersive haunts outside of Odessa, TX (which also happens to be the filming location for CIRCUS). The two previously teamed up teamed up in 2010 to create the stunning 27 minute short DOLL BOY, complete with Grindhouse style ‘trailers’ for CIRCUS OF THE DEAD and MISTER FISTER (check this one out, people!).  This all helped pave the way to, what I personally believe, is one of the best new additions to the genre in quite some time.

CIRCUS OF THE DEAD is gory and uncompromising, even unsettling at times. It’s a love letter to fans of gratuitous violence and excessive bloodshed. 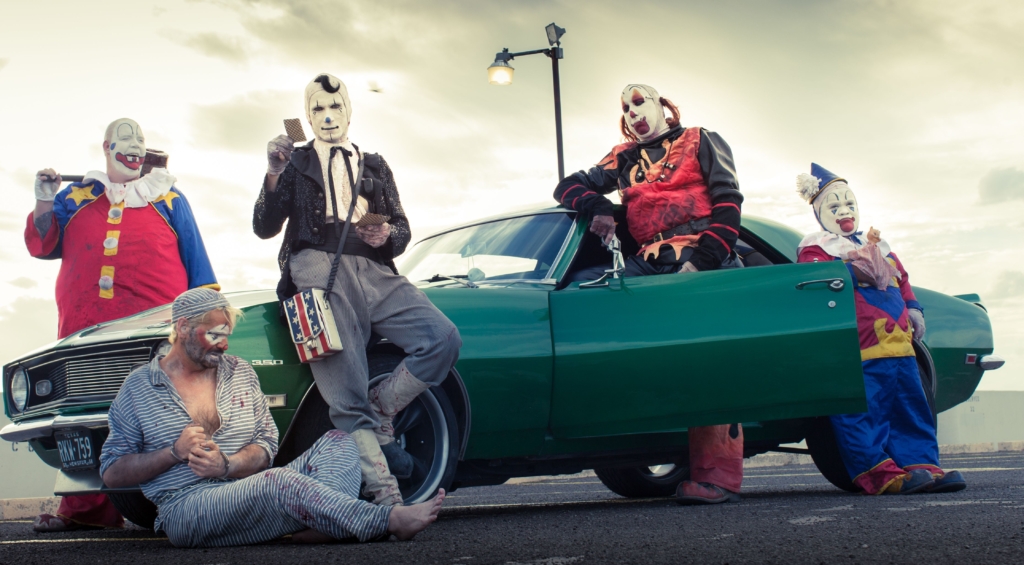 The film is about a twisted Circus that has come to visit a small Texas town . This particular Circus is home to a group of relentlessly vicious clowns. The leader, Papa Corn, was played terrifyingly well by Bill Oberst Jr. In fact, the indie favorite took home the Best Actor prize at the 2015 Chicago Horror Film Festival for his spot on portrayal of this psychopathic, murderous clown. The deranged group of grease-painted lunatics also includes Jumbo (Mike Williams), Mister Blister (Rusty Edwards), and Noodledome (Ryan Clapp). Each gives a compelling and brilliantly disturbing performance. 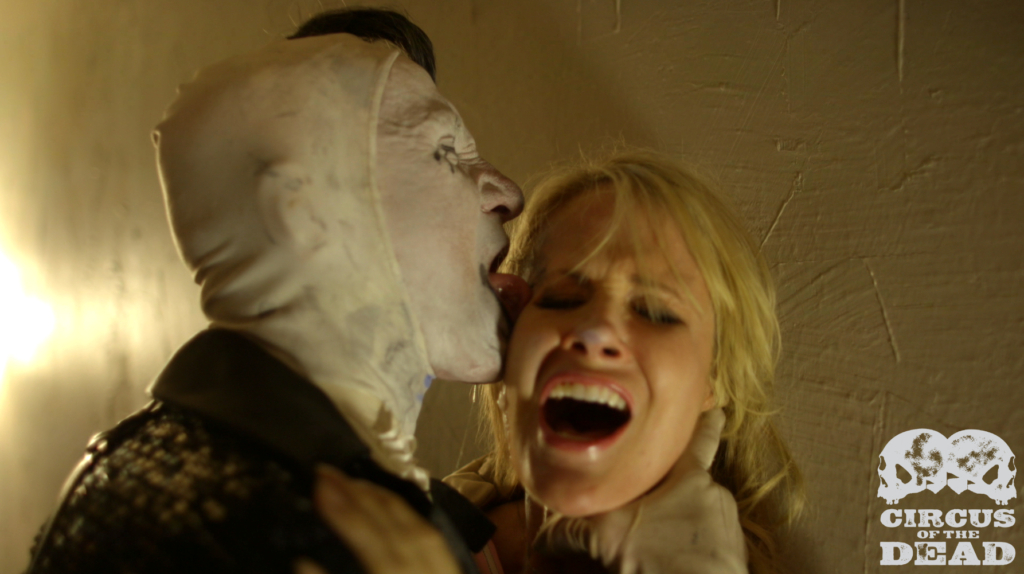 The film opens in a particularly brutal way, as we watch the savage foursome torture a kidnapped man named Brandon. Papa Corn, not enjoying the words his captive is saying, proceeds to staple his mouth shut. He tells his victim, “Silence is golden,” then proceeds to saw off his hand at the wrist before cauterizing the wound with a blow torch. This all happens as bored family man Donald (Parrish Randall) decides to take his attractive wife Tiffany (Chanel Ryan) and two young daughters on a family trip to visit his tiny Texas hometown.  This proves to be the worst decision of his life.

Legendary special effects guru Marcus Koch, who recently directed the exceptional American Guinea Pig: Bloodshock, handles effects for this film (alongside Heather Buckley and Matthew Ash). He also makes a fun cameo as the ticket taker, when the family outing begins innocently enough at the Circus. 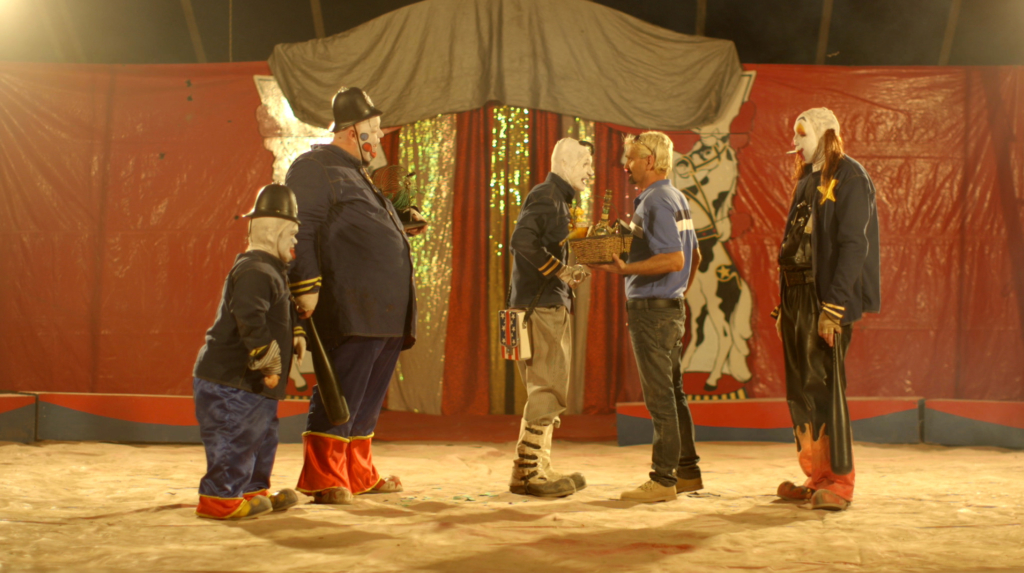 Little does Donald know though, the sadistic sideshow leader spots and targets his family within the crowd. Papa Corn then rigs a contest to ensure the husband and father sitting at seat F32 receives a basket full of questionable gifts, such as duct tape, hand cuffs, vaseline, and a pill bottle — all under the guise of being a ‘Romantic Getaway’ prize. Leaning in quite uncomfortably, the clown whispers ominously to Donald, “I’m going to kill your whole family.” Donald, not sure if he heard the clown correctly, lingers hesitantly in Papa Corn’s presence.  Not long after, he comes home to find a horrendous scene courtesy of the clowns, and his daughters are missing. Papa Corn demands his new victim play a game with him in order to get his daughters back.

The group dynamic between the gang of calculating, sociopathic clowns is beyond unnerving, and the dark humor and vision of violence created by Ankrum and Pon collide masterfully. 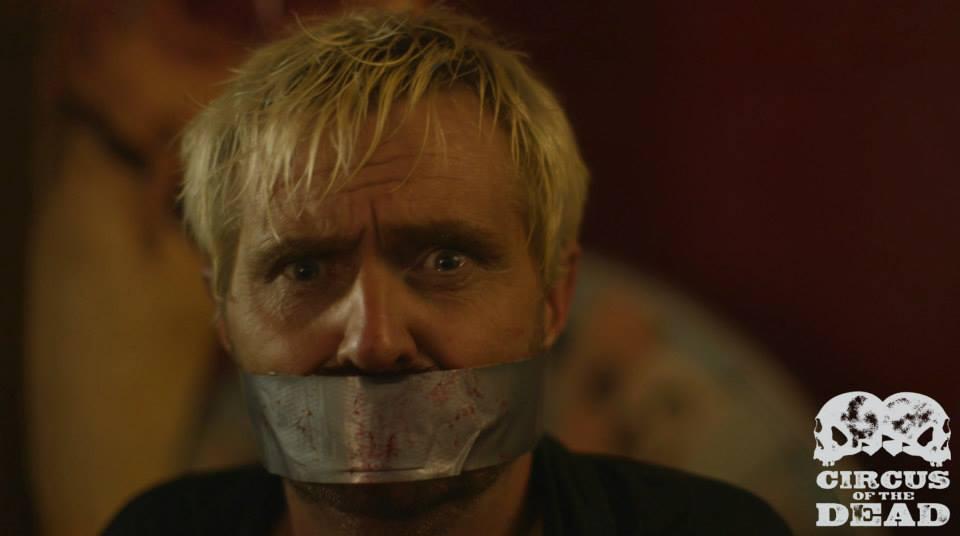 The two men wore a number of hats during the making of this film, handling the jobs of editor, set designer, production designer, and executive producer. The end result is a film that is gritty, bloody, and brash in its graphic nature — well paced and impeccably shot. The shocking alteration and subsequent violation to Tiffany’s corpse was unpredictable and profound. This film revels in its depth of depravity, as the clowns kidnap, terrorize, and demoralize Donald during their violent crime spree.

CIRCUS OF THE DEAD racks up an impressive body count as it throttles towards its devastating climax. For fans of good old fashioned gore and mayhem, there’s a lot of fun to be had with this incredibly impressive debut from Billy Pon.

Pre-order your DVDs & BluRays this Friday, January 2oth at <a href="https://l.facebook.com/l.php?u=http%3A%2F%2Fcircusofthedeadmovie.com%2F&h=ATOJisdZOMXm0v5gx3O5yaFOUgzbizud4zVcEtQ6HCEy2G4tFU8KETJT4eTJqVIOr80g1b4ZSXs19va4OHJakgKadTRSJX0mHDNmJNYgdspzp4lux4xOrZlL5TeQactwv9KvltNiKDL1uC7xC4RqoRW_vg&enc=AZO2_nKhMQ4qp79F-tg79uZl1TQ6QlGTpyi2Y5LiAEjoSJMwiveLj2tajJKtAxjUwY6OVW7pcuuvlef59VY0pHGioSXmO3iR6jdeO_DKcp2JIKnm174wl6TjZZtmYatd1DpeXnk3vrc-HIcDAz3HlQ