Horror Short: Is That You? (The Witching Season)

Episode 5 of The Witching Season, “Is That You”, is another spooky and satisfying entry in the exceptional Halloween horror web series 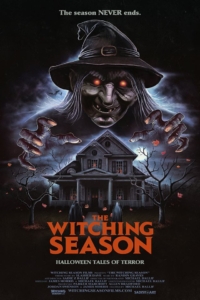 We have been obsessing over the Halloween horror anthology web series, The Witching Season, for some time now — anxiously awaiting each new episode with the giddy, unbridled enthusiasm and anticipation of a kid waiting for the sun to set on All Hallows’ Eve.

The Witching Season is a series of self-contained short horror films released on YouTube as a free web-series. It’s the first project from Witching Season Films, a horror film production company formed by filmmaker Michael Ballif.

Inspired by anthology shows such as Tales From The Crypt, The Twilight Zone, and Are You Afraid Of The Dark?, The Witching Season delivers originally produced tales of terror, all set during the Halloween season.

Several months following the release of their fourth and most ambitious episode to date, the brilliant “They Live Inside Us” (December 2016), the incredibly talented filmmaking team of James Morris and Michael Ballif are back with another great entry in their popular web series.

“Is That You?” is a little over 11 minutes long. The story centers around a teenage girl named Whitney who is confined to her bedroom on a Halloween due to a broken leg. While her best friend ditches her for some quality time with the boyfriend and her Halloween-loving mom entertains the neighborhood trick-or-treaters, Whitney sulks and watches a cheesy horror host on television.

The lonely and restless Whitney is longing for something interesting to happen — something to shake up her dull evening. But when she notices an eerie figure lurking outside her home, she starts to worry what tricks this Halloween night has in store for her.

“Is That You?” was written, directed, and edited by James Morris, based on a story by Morris and Ballif. Talented composer Randin Graves once again lends his considerable talents to the perfectly haunting and atmospheric score. Morris is a master of suspense who skillfully builds tension and dread in the film’s short run time. Like all the shorts in the series, this one is beautifully shot and well edited, with cinematic quality cinematography.

The film opens with a short and chilling poem that scrolls over the picturesque establishing shots of a suburban neighborhood decorated for the Halloween — finally focusing in on the home of Whitney and her mom.

In a few short lines, Morris effectively establishes the mood of the film and gives the viewer the perfect amount of backstory for his tale of terror.

On all hallows’ eve, she comes with the wind.
As darkness descends, she’ll find a way in.
Those who have seen her, they go to the black.
For once you have seen her…
You never come back.

Once again, filmmakers Morris and Ballif do not disappoint horror fans with a fondness for high quality, nostalgia-fueled shorts that truly celebrate the spirit of Halloween. The only thing I really missed was the exceptional Director’s Commentary that’s accompanied other shorts. But, with any lucky, maybe we’ll get that soon.

If you haven’t yet discovered The Witching Season on YouTube, now is the perfect time to check it out. For those new to the series, I almost envy you. With the release of episode 5, you now have nearly an hour and half of exceptional horror content to sink your teeth into.