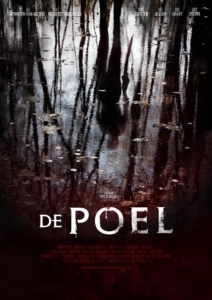 The Pool delivers some shocking imagery and realism in its portrayal of a family camping trip deep in the Dutch wilderness that goes horribly wrong upon the discovery of the titular lake.

As if a week of camping in the deep wilderness with two families wouldn’t be testing enough, when you throw into the mix heightened sexual tensions, deep resentment between family members & an eerie water nymph, things go awry pretty quickly in this effective debut feature from director Chris W Mitchell that stays with you after viewing.

The film starts off relatively generically – two families head off deep into the back woods of the Dutch countryside for a “back-to-basics” camping trip.  As it emerges that the two father figures (played brilliantly by Gijs Scholen van Aschat & Bart Klever) have decided to set up their own financial consulting business (following their redundancies from a large banking company), tensions begin to rise between Lennaert (van Aschat, who also co-wrote the script) and his wife Sylke (Carine Crutzen) who has been kept in the dark about their plans. Further pressures build between the children – Marco and Jan are typical teenage brothers with a love-hate relationship – and Emilie is the attractive yet naïve focus of their attentions.

When the group’s food supply is mysteriously spoiled overnight, Lannaert is forced to head back into civilization to seek supplies so that they don’t have to end their vacation early.  The only problem is, every time the group try to leave the camp, they end up back there.

Frustrations mount, and when Rob (Klever) decides to catch some fish from the pool to feed everyone, Lannaert’s feelings of personal inadequacy begin to rear their head.  Following a seemingly delicious eel stew that is cooked up by motherly Sylke, the party suffer terrible food poisoning which has tragic consequences.

Again thwarted in their attempts to leave the camp, the whole dynamic of the relationships spiral rapidly out of control, and the story switches its attention to the paranoia and survivalist instinct of the group.

The last 10 minutes of the film are shocking enough to deliver a knockout punch following the heavy character development from the first half of the film – and the ending will leave an indelible mark on those who have stuck with this intelligent offering through the slim 76 minute run time.

The supernatural element is effectively understated until the last few minutes – leaving the viewer questioning whether it is real or a figment of the imaginations of the strained protagonists.

Strong direction, and the treatment of Lannaert’s deteriorating mental state (which is reminiscent of Jack Nicholson in The Shining) as the head of the family are compelling enough to make this film stand out from the usual low budget independent fare.

Mitchell somehow manages to make the woodland setting feel claustrophobic, and he keeps the pace even, never getting bogged down with unnecessary exposition.  He successfully composes the juxtaposition of the supernatural element and the real life tensions, which work effectively to give a sense of familiarity and believability to the proceedings, and the envelope is never pushed too far in one direction.  The visuals are effective without being overbearing, and whilst the horror isn’t particularly visceral, it is definitely a haunting film.

The Pool is an intelligent and character driven low budget independent film which is worth seeking out if you enjoy something a little less mainstream.

Don’t let the Dutch language put you off either – the film isn’t particularly dialogue heavy.