Released on September 1st by Anchor Bay Entertainment, Lost After Dark is a loving and incredibly fun homage to the great slasher films of the 1980s. I’m a huge fan of the slasher subgenre, and the filmmakers hit a homerun with this spot on tribute— featuring old-school practical effects, creative kills, and a perfectly on point 80s retro vibe. The film marks the directing debut of writer/director Ian Kessner, who I was fortunate enough to talk to in depth about his much buzzed about film. 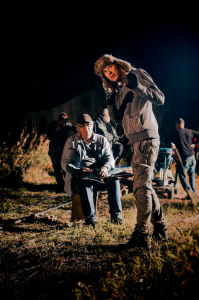 Director Ian Kessner on the set of Lost After Dark

Ian, thank you so much for taking the time to talk with me about Lost After Dark. I’m a huge fan. Can you start by telling me where you got the idea/inspiration for this film?

The inspiration for the film came from the script. When I read the original draft by co-writer Bo Ransdell, it just brought me back to the scary films I loved while I was growing up, and I knew then I wanted to make it.

What were some of the unique challenges you faced trying to get this film made?

That question could be the premise of a book! There were so many. Some of the big ones were raising money as a first time director, fighting to hold on to elements of the script, which included some unconventional twists, and having to work under an extremely tight prep and shooting schedule with very little money.

Unlike a lot of “retro-cool” films that try to provide tongue-in-cheek commentary on the genre, this film felt like a genuine love letter to the slasher films of the past. Was this intentional? If so, what do you love so much about the slasher sub-genre?

It was definitely intentional. Tone is crucial when telling a story. Bo and I really wanted to be true to the slasher sub-genre which influenced us in our youth, without making fun of it. We wanted to deliver on the creative kills horror fans expect from the best films of that period. So rather than make an overt parody, which Scream already nailed to perfection, we chose to play it straight and make a fun horror film that stood on its own. When you watch Lost After Dark, hopefully you feel like it was actually filmed in the 80s rather than something produced today. 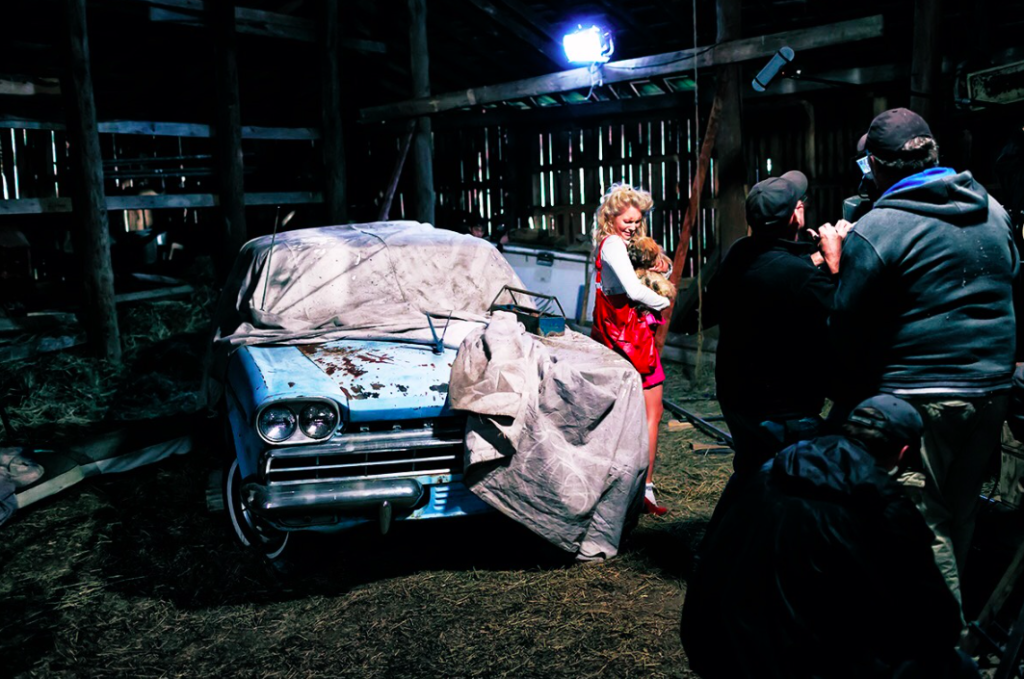 Absolutely! You really nailed that 80s look and feel. If you could, tell us about the collaboration with co-writer Bo Ransdell. How did that come about? Do you have plans to work together in the future?

I came across Bo’s first draft for the film and fell in love with it. I then contacted him and optioned it. After that, we worked on multiple drafts of it together, and then I brought the film to indie producer Eric Gozlan of Goldrush Entertainment for financing. That was back in 2010. Since then, Bo and I have successfully partnered up on multiple projects for both film and television. We love working together and I don’t foresee an end to that anytime soon.

What’s been your favorite part of this experience?

My favorite part of the experience has been the reaction to it — whether it’s watching the movie with an audience and hearing them laugh and scream in all the right places, or interacting with fans of the film on social media who loved it — just knowing that people enjoyed the ride is so gratifying and thrilling considering the amount of blood, sweat and tears that went into making it. 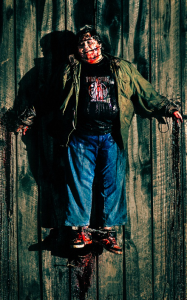 It’s definitely a fan favorite. Part of that is due to the exceptional, old school practical effects in this film. Tell us about the FX team that worked on this film.

In trying to bring the many kills in the script to life, I wanted to rely on practical effects as much as possible to emulate the classic slasher films of the era that we’re celebrating. In prep, my brilliant production designer Peter Mihaichuk and his team, which included our awesome property master Matthew Ellis, prepared a kill list for us to work off of. The talented Luc Benning was then brought on as our special effects key, along with the equally talented Trina Brink for SFX make-up along with additional assistance from the wonderful Scotia Boyd. Eric Bryson, our terrific stunt coordinator, was also key to the equation. Together we went through the script and figured it all out. It was a blast.

Did you have a very specific vision for what you wanted to see onscreen when it came to the FX? Any particular inspirational sources you pulled from?

Peter and I looked at a lot of Tom Savini’s work, since he’s pretty much the guru of horror special effects make-up and kills from that period. Friday the 13th was a big inspiration, another was Happy Birthday to Me. The list goes on. There’s also a fun nod to Fulci’s Zombie 2 in the film a lot of fans pick up on.

I love Zombie 2, and the reference was one of my favorites. Is there anyone in the world of FX you would most like to collaborate with on future films?

Tom Savini, Rob Bottin, and Rick Baker are all geniuses. I would be honored to work with any of those old school masters. Primarily for their incredibly skilled craftsmanship and enormous imaginations, but also to hear the many behind the scenes stories they must have to tell. 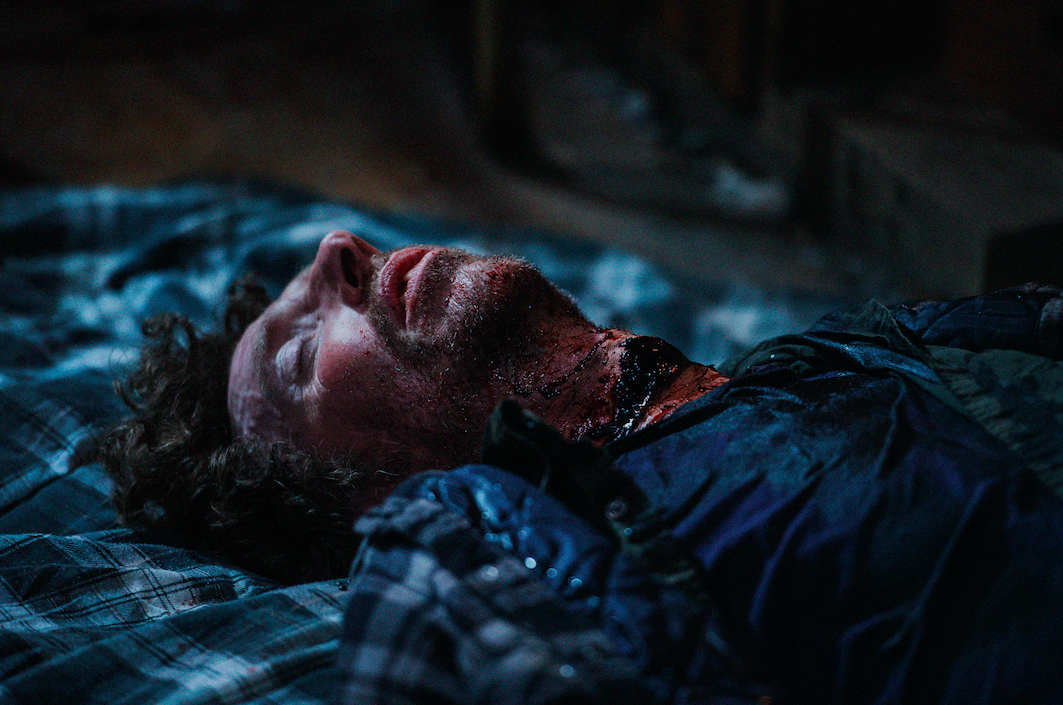 This film marks your feature film directorial debut. How happy are you with how this film turned out? Anything you would have done differently knowing what you know now?

It’s been a long hard road to get to this point in my career. In the final analysis I’m ecstatic with how the film turned out. Sure there are shots/scenes I wished I could have gotten that were sacrificed because we didn’t have the time or money, but ultimately they weren’t needed. When I randomly met Quentin Tarantino maybe a week after I finished the shoot, I was bemoaning the fact that at least 20% of the stuff I’d hope to film I missed. It was keeping me up at night. I asked him how he deals with it, assuming even he can’t get everything he wants.

Quentin reminded me that I probably got 20% extra material via happy accidents that I never planned for, which overall made the film better. He said those two things balance each other out and not to keep sweating it. He was right. After that I was able to focus on what I had gotten, and make the most of it. When I watch the final cut of the film now I’m thrilled. To see it all come together like I’d envisioned is really a dream come true.

That’s awesome! You should be incredibly proud. In the future, do you see yourself sticking with the horror genre or do you have plans to branch out to other genres of film?

I’ve always been a big fan of genre film. I really love horror, sci-fi, and fantasy. I’m also a huge fan of comedy. All of which are considered genre filmmaking.

So I definitely see myself following that path. I think people go to movies to laugh, cry, or scream, and when you can do any of those well in the context of a satisfying story audiences will have an emotional response. If all they can say after watching a film is that it was interesting, you have a problem. 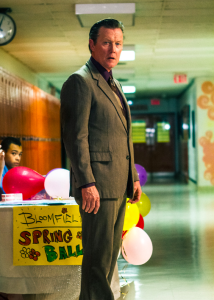 Since you’ve had so much success with this brilliant homage to 80s slashers, I have to ask…if you could remake any 80s slasher film, which would it be and why?

The cult classic Waxwork. We already have a terrific script, a strong producer, and the blessing of the original filmmaker, Anthony Hickox. In Waxwork a group of kids find themselves trapped in a traveling wax museum with terrifying displays from past horror films — think vampires, werewolves, a serial killer etc. The kids are drawn to the displays and sucked inside them, where they are thrust into the climax of a horror film and must fight to survive or become one of the figures trapped in the displays, which allows me as a horror fan to recreate the best the genre has to offer. So on one level the film plays like a straight horror movie, on another it’s a meta-horror film a little bit like Cabin in the Woods. Now all we need is the remake rights from Lionsgate and we are on our way!

Wow! I’m beyond excited. Waxwork is honestly one of my favorite old school horror films. I can’t wait to hear more as that project progresses. So now I have to ask a tough question. What are your top five horror films of all time?

That is such a tough question. I’ll go with The Changeling, The Omen, Friday the 13th, The Texas Chainsaw Massacre and The Exorcist. But if you ask me tomorrow I might say Jaws, The Thing, Nightmare on Elm Street, Don’t Look Now and Alien. There’s just so many! 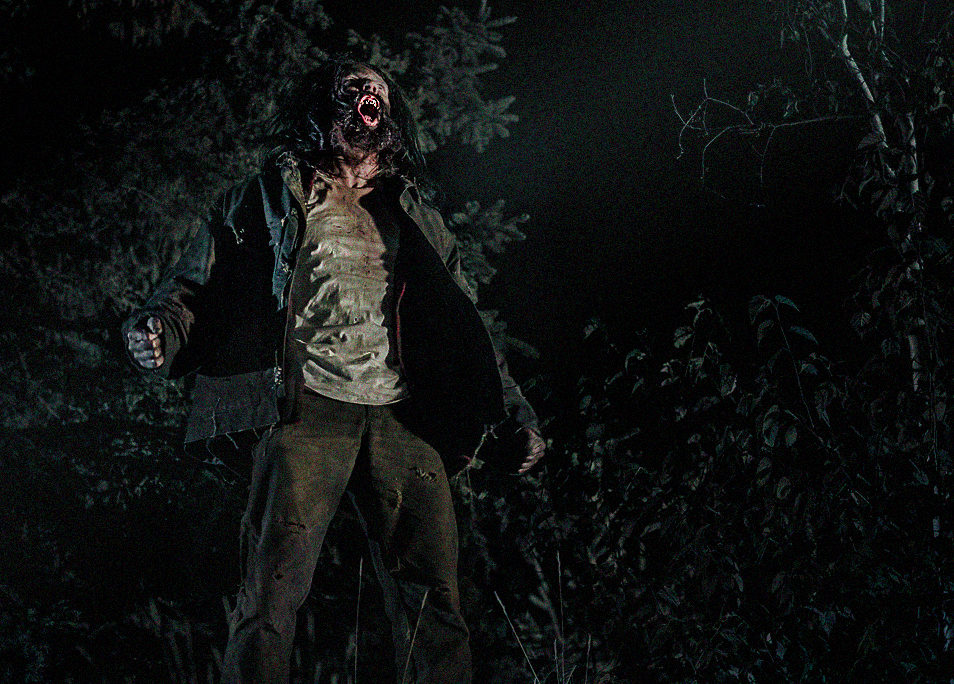 Great answer! Anything we didn’t cover that you especially want fans to know about this film?

I just want to thank anyone who buys or rents Lost After Dark for investing their time and money into it. I hope they have as much fun watching it as we did making it. And if that’s the case, I would encourage them to follow us on Facebook, Twitter or Instagram and spread the good buzz. Small indie films like ours survive on great word of mouth. A positive review on IMDB, or any site, goes a long way toward the success of the film.

I’d also ask them to not steal the film online since that will hurt the films bottom line. We have a super fun script already written for a Lost After Dark sequel, but it won’t get funded if the first one doesn’t make back its investment. Finally, Bo and I recently released a writer/director commentary track on MP3 to accompany the film for those fans that want to dig a little deeper into the process of making the movie. You can find a link for that on one of our social media platforms.

Thank you so much for your time! I absolutely loved Lost After Dark, and I’m so excited to see more of your work in the very near future.

The pleasure is all mine. Thank you for bringing attention to our little film just in time for Halloween!