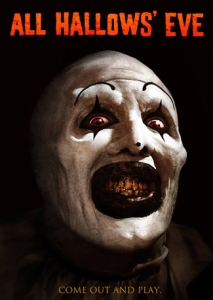 All Hallows’ Eve is an anthology film showcasing the work of writer/director Damien Leone. It was released direct-to-DVD on October 29, 2013. It’s a weirdly mixed bag of disconnected stories that somehow manages to still be a pretty solid and scary horror film. Impressively, Leone did his own FX, and they look pretty great. Although the narrative doesn’t really hold up in some of the stories, all the creatures are well done and incredible to look at. At just 80 minutes, the movie never really has time to become boring and, even when the stories don’t quite work, it’s still a fun ride.

It’s a strange film to be sure and surprisingly hard to describe. Though technically an anthology, it’s structurally quite different than what you’re probably used to with the subgenre. The movie consists of three main stories, as well as a wraparound featuring a babysitter, a couple of kids, and a mysterious VHS tape. Despite the attempted wraparound, none of the segments are really related, and they all seem oddly disconnected due to being shot on a variety of different mediums and cameras. There’s a good reason for that.

Apparently, this film was constructed of footage shot as far back as 2004 and includes scenes from two of Leone’s earlier shorts, The 9th Circle and Terrifier (which also features the character of Art the Clown). The director added material and used the original shorts to compile All Hallow’s Eve. Thus, the anthology aspect of the film was born more out of necessity than a key plot device.

The film opens with the wraparound story featuring a babysitter, Sarah, (Katie Maguire) and the two kids, Timmy and Tia, (Sydney Freihofer and Cole Mathewson) she has been hired to look after on Halloween night. Sorting through their trick-or-treating loot, they discover an unlabeled VHS tape that has been slipped into one of their bags. Although surely not the smartest decision, they decide to pop in the mysterious tape and check out its contents. What they discover is a series of bizarre and graphic stories with the recurring image of a seriously creepy clown (Mike Giannelli).

After watching the first surreal and disturbing segment on the tape, Sarah sends the two kids to bed. But she continues watching the video alone. As the night progresses, things in the real world get stranger and stranger. She tries to convince herself it’s all in her head and, despite her growing fears, she forces herself to keep watching. By the time she reaches the end of the tape, she realizes the nightmare has moved from the tape to her very real and present reality.

So let’s talk a bit about the segments that make up the film.

The first story was shot on 35mm in 2006. It has a completely different look from the rest of the film, and it’s oddly placed within the “VHS” structure of the setup. It’s a story about a demonic cult that lives in the under-workings of a train station. It’s weird and doesn’t make a lot of sense, but there’s definitely some twisted stuff happening that holds your attention (including demons and sex with Satan). The segment begins with a glimpse of Art the Clown, who is creepy and menacing, though he has little to do with the actual story after the initial setup. Like Sam from Trick R’ Treat, he seems to be a harbinger of evil who brings chaos with him wherever he goes.

The second one was the last one shot by the filmmaking team, and it also happens to be the segment that feels the most out of place. It features a woman living in a new countryside home who begins to experience strange occurrences. It’s revealed she’s being stalked by aliens. There’s not much going on in this story outside of the cool creature effects. We do get a quick glimpse of Art the Clown via painting at the end of the segment.

The third and final segment (excluding the wraparound) is by far the strongest. The film shines on the strength of this story alone, prominently featuring the twisted and terrifying Art the Clown. This one tells the tale of a college student driving home alone at night. She encounters Art at a gas station and spends the rest of the film being stalked and terrorized by the homicidal clown. The narrative is strong, the clown is perfectly creepy and nightmare-inducing, and the segment itself is inventive, memorable, and fantastically gory.

This segment segues directly into the climax and close of the film. Disturbed by what she has seen, Sarah attempts to shut off the tape. However, she finds that she is unable to do so. She can’t escape the horrifying image of Art maniacally laughing and seeming to peer right through the television, looking directly at her. I’ll avoid the rest of the plot to stay out of spoiler territory, but it’s a decidedly dark and truly impactful way to close the film.

I will say this movie is far from perfect. While, overall, I enjoyed it quite a bit, it’s not for everyone. First, l’ll address what may turn some of you off to this film. It’s definitely low budget. That being said, the effects are all practical, which can be really refreshing. Although the same director did this entire film, each segment has it’s own unique style and feel. There’s not a lot tying the segments together, so it makes for an odd anthology. While the last two segments (the third story and the final wraparound) are quite strong, the first half flounders a bit. The movie can truly terrifying at times, but there’s also a fair amount of camp and some uneven acting.

With those flaws aside, this truly is a fun watch with a lot for horror fans to love. Honestly, the creepy clown character alone was enough to make this movie memorable and frightening. He’s played to sinister perfection by Mike Giannelli. I personally am not one of those people with an inherent fear of clowns. But Art was definitely a clown you could have serious nightmares about. He’s strong enough to carry a film in its entirety and even become a franchise character.

Katie Maguire as the babysitter also delivers a strong and convincing performance. The makeup effects by Leone are appropriately gruesome and realistically gory. The film is shot well and has a cool retro look to it. All in all, Leone makes an impressive directorial debut and delivers an entertaining and disturbing movie with a memorable new horror villain in Art the Clown. Quick note: Make sure you watch until the very end.

ALL HALLOWS’ EVE is a fun and inventive anthology film. Despite its flaws, this film offers enough genuine scares and practical gore, as well as a super creepy and memorable bad guy, to satiate most horror fans.