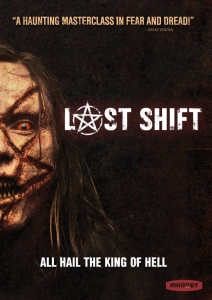 Last Shift (aka Paymon, The King of Hell) is the newest horror movie from up-and-coming talent Anthony DiBlasi. His first feature Dread, based on a Clive Barker tale, was an incredibly solid and promising directorial debut (read my review here). In this film, however, DiBlasi expands on that promise and ups his game considerably. Last Shift is nearly flawless in its execution—tense, terrifying, gorgeous to look at, and wickedly smart.

The movie follows a rookie officer, Jessica Loren (played by Juliana Harkavy of The Walking Dead), whose first day on the force has her working the late night shift of a transitioning police station. Everyone and everything is gone, and all 911 calls have been re-routed. Her assignment is just to ride it out and wait for a crew to arrive and pick up biohazard waste from the armory. Unfortunately for Jessica, though she may be the only other person in the station, she’s definitely not alone.

Jessica’s first shift takes place on the anniversary of her father’s death, a year earlier. He, too, was a police officer, killed in the line of duty. It also happens to be the anniversary of the death of a notorious Manson-inspired cult leader, John Michael Paymon (Joshua Mikel), and members of his “family.” They committed suicide by hanging in a holding cell at the station Jessica is tasked with guarding, and they have not left the premises.

What follows for Jessica is a night of increasingly escalating disturbances—creepy noises, unexplained events, haunting phone calls, and an onslaught of sinister specters. She finds herself trapped, not only by evil supernatural forces, but also her sense of duty as a police officer (and a daughter of a slain cop).

It’s an unsettling film that does something incredibly interesting by focusing on a single film lead for about 90% of the film. And unlike most female leads in horror films, she isn’t a screaming, fragile, helpless victim. She’s smart, strong, brave, and highly competent. While faced with a situation that is completely out of her control and utterly terrifying, she keeps her cool and holds her ground (repeatedly reciting her oath as an officer to steady her nerves).

Harkavy shines as a believable, fleshed out, three-dimensional heroine. Considering she’s the only person on screen for much of the film’s running time, she does an incredible job investing us in the character’s plight.

DiBlasi uses sound and editing in an extremely effective way to create an intensely creepy and atmospheric film. There are the usual supernatural scares and spook out techniques on display here, but it all feels very fresh and surprising. Even the jump scares, which purists love to hate, are remarkably well done—perfectly timed and brilliantly executed. None of the attempts to terrify seem contrived or manipulative. Everything is meaningful within the greater narrative.

Everything just works in this film. The atmosphere is thick, the sound design is excellent, and the effects are fantastic. DiBlasi and cowriter Scott Poiley manage to create legitimate dread and teeth-clinching suspense. It has an old-school vibe without trying too hard, and boasts slick production values. Do yourself a favor and see this movie. It’s one of the most surprising and truly fear-inducing horror films in some time.

A twisty, clever, and exceedingly intelligent psychological thriller with a supernatural twist. Last Shift is a creepy and terrifying movie that keeps you guessing and on the edge of your seat until the final, gut-wrenching scene.