Los Angeles is the place for horror this summer! Come and watch Live Make-Up Demos at the Boneyard FX booth, meet David Naughton from “An American Werewolf in London” and get your photo taken at Alice in Terrorland!

The Midsummer Scream Halloween Festival is the newest in the growing group of conventions for those of us interested in Halloween above all other things! Your Los Angeles Zombie Girl herself gets to be a main part of the action when she is transformed on Sunday to be a mutant in Toxicity – one of the uniquely scary mazes in the Hall of Shadows Scare Zone. SFX Make-Up Artist extraordinaire Larry Bones and his world-class team of artists from Bone Yard Effects will transform a group of volunteers into mutated creatures that will roam the show floor and the Hall of Shadows. I got a chance to talk to Larry about Bone Yard Effects and his creatures at Midsummer Scream. 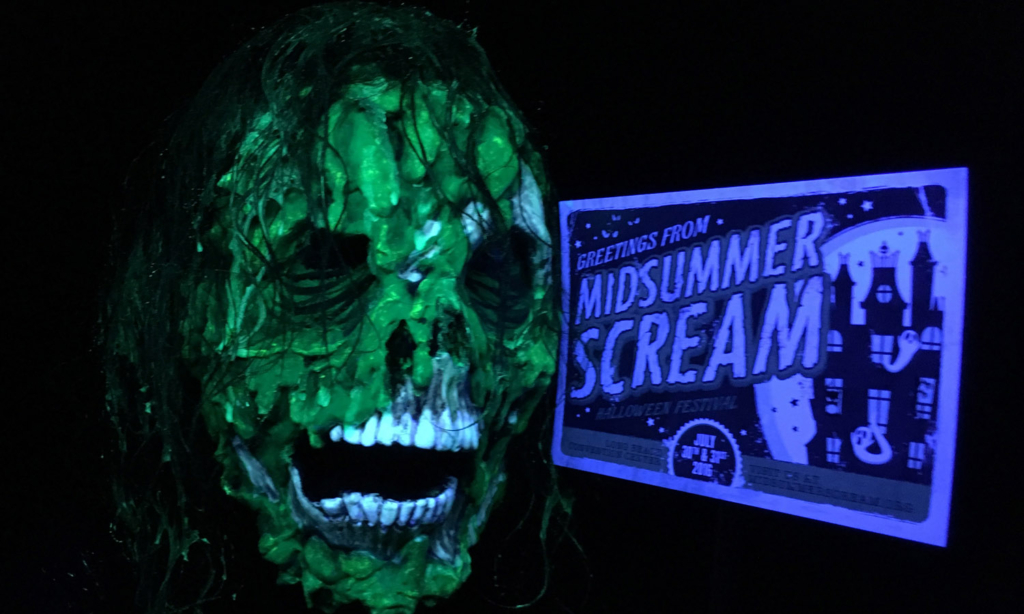 Los Angeles Zombie Girl: Larry, how long have you been doing SFX make-up?

Larry Bones: “I have been doing special effects makeup professionally since 1993, although I dabbled with it for several years previously.”

ZG: What sparked your interest in monsters and how did you get started?

LB: “I have fascinated with Horror films since I was quite young. I was the kid who snuck out of bed after my parents went to sleep so I could watch late night horror films at extremely low volume. I progressed to making monster heads out of playdough. One thing led to another and I relocated from Oregon to Los Angeles in early 1993 to attend a makeup trade school.” 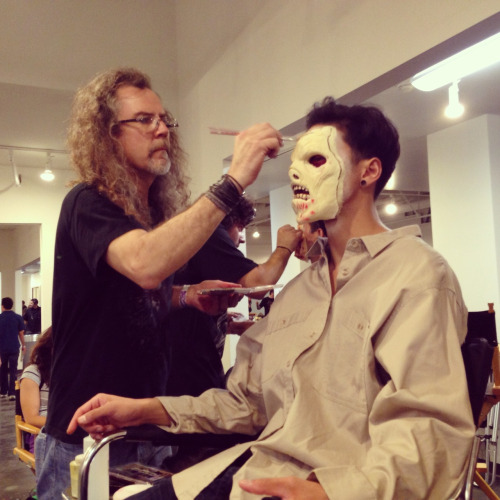 ZG: Did you start directly with prosthetics or did you just do make-up at first?

LB: “When I attended the makeup school, I was taught every aspect of makeup from beauty to beasts. Although I don’t do beauty makeups, the training helped in other areas of the trade. I always gravitated toward the Monster/Horror side of it all.”

ZG: Tell me a little bit about your collaboration with Midsummer Scream. It is a new convention- last year you were at Scare LA.

LB: “When the team at Midsummer Scream contacted me with this crazy plan of putting together a Halloween tradeshow in a few short months, I thought they were crazy. I guess it’s a good thing I’m a bit crazy too as I couldn’t wait to jump on board!”

ZG: What can you tell me about the concept for Toxicity, why did you pick that theme, what can we expect to see, why is it going to be a scary maze etc…

LB: “There was so little time to plan out all the elements we are bringing to Midsummer Scream, we had to hit the ground running. After a decade of heading up Halloween Horror Nights, I’ve seen how people react to different characters over the years. It seemed that any character that was disgusting, slimy or mutated, the guests would be terrified that it would touch them. The actors didn’t even have to try hard to scare them. It came naturally. So I thought let’s do Toxic Mutations! Hmmm. Genetics?  Sounds good!”

“So TOXICITY was born!  Guests will enter the GENETECH Facility, a genetics laboratory that has just suffered a horrible toxic chemical explosion that has mutated all the scientists into hideous creatures! We will have over 30 monstrous mutations with our Scarezone throughout the weekend.”

ZG: I am going to be one of your mutants in Toxicity. I’m getting a partial, almost full-face prosthetic. Can you walk through what will happen to me that day? How long will it take?

LB: “The process takes about 2 hours. You will be paired up with one of my Creature Crew who will prep your skin for application. They will then glue down the foam latex prosthetic directly to your face. This allow full expression in the makeup that you don’t get from a pullover mask. After the process of gluing and blending the appliance down, they will begin to apply makeup to the surface of the appliance as well and onto your skin so the look is seamless. Once the artist is satisfied with the makeup, you will get a visit to the toxic hair department for some glowing hair gel to slime you out. You then get to enter the GENETECH facility to become a Toxic Mutation out for the guests’ blood!” 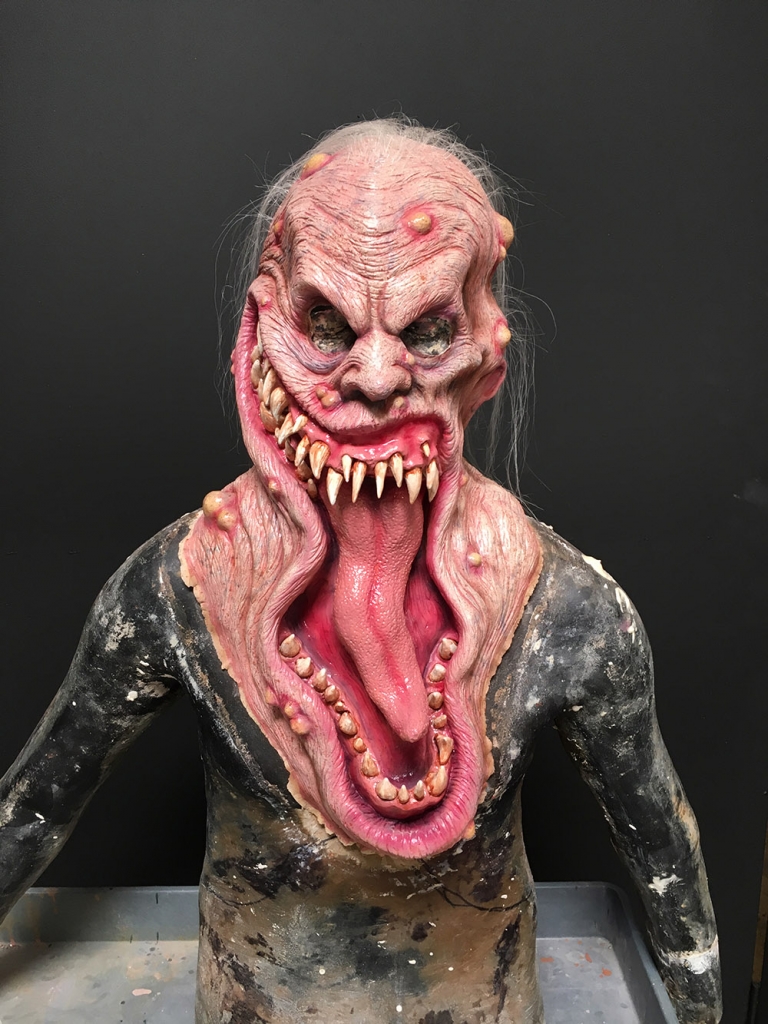 ZG: You and your company Boneyard Effects are in charge of the make-up for Universal Studios Hollywood Halloween Horror Nights – How did you end up getting that job and how long have you been there?

LB: “When Halloween Horror Nights came back in 2006, a friend of mine who works Knotts Scary Farm told me that he heard rumors of its return. It was a dream of mine to work at Universal as I grew up with all the old classic Horror films. I began contacting anyone I knew that might have more information on who to contact. I finally found the right person who gave me a phone number to Chris Williams, the art director who was going to hire the vendor. I got in to meet with him and was awarded the contract! I’m currently in pre-production for my eleventh year.”

ZG: What is the best part of working at Universal Studios?

LB: “Working there has been such a great experience! They always challenge me each year with ‘How are we going to pull this off?’ and I love that. How to recreate classic scenes from movies and television shows into a month and a half long Halloween event and make it film quality? It’s a huge creative process.” 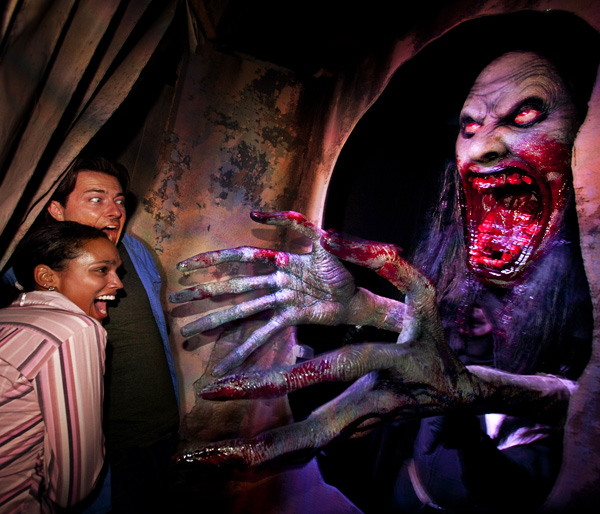 ZG: Where do you get all your ideas?

LB: “For Halloween Horror Nights, Universal provides all the characters to create, but for Bone Yard Effects projects, it’s all out of the brains of my team and myself. FX Artists are a little deranged but in the best way possible!”

ZG: What is the start to finish process for a full mask?

LB: “It’s about 3 days to sculpt the design, then another 2-3 days to create the mold from that sculpture. It then goes off to the foam department for casting. It takes a full day in that department before heading off the patching and seaming. That usually takes about a day. Then off to the paint department. Depending the design of the mask and its detail, it will spend about half a day there. If the mask requires hair, that’s where it heads to next. Also depending on the design, it’s usually about a half day there. So you can see that a lot is put into every mask we create. We produce over 300 of these for Horror Nights each year!” 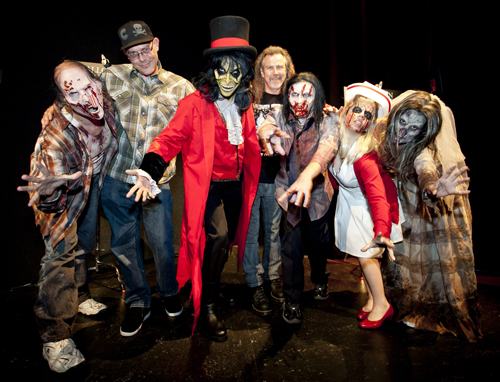 ZG: What is your favorite part of your job and why?

LB: “It’s the creativity. With this job, I never know what my next project will be. Rarely are they similar.  Zombies, Clowns, Monsters, old age simulation, bald heads, dental fangs, injury simulation, body parts, puppets, props, etc. The list never ends and it keeps me excited for what might come down the road at me next!”

ZG: Wow what an amazing life you have! What else can you share with my readers about the upcoming Midsummer Scream?

LB: “Our makeup demonstration booth is located right inside the entry along with our FX Faces retail booth. Come by and meet our guest David Naughton from An American Werewolf in London fame, get your free photo op ALICE IN TERRORLAND (Thanks DStar Photography), and TOXICITY is directly inside the Hall of Shadows! I hope to s