Quiet Horror: A Definition and a Story

Like horror itself, quiet horror defies a single definition and can be interpreted in many ways and many forms.

I personally would define quiet horror as wind whistling through the cracks of a dilapidated home in a desolate stretch of land inhabited only by the ghosts of memories that died when the house was left to ruin.

This house could be in the country (like the house in my story), or it could be in the suburbs, or in the city. Harshly contrasting with the newly built and developed neighborhoods and homes that have grown like a thousand identical dandelions in what once was a field. A neighborhood of homes much like the one left to serve as a snapshot of what the neighborhood once looked like before it was demolished and replaced.

The horror originates from the memento mori quality (a reminder of mortality) of the decaying home. The home that, unlike a corpse left rotting hidden from view in the earth, is instead rotting in full view. I think that quality is the reason we have these places condemned, torn down. I think that’s why we give our lawns buzz cuts and paint our houses the second we notice the shingles chipping. In our homes, where we live, we don’t want to be reminded of the end, reminded that someday our house, our home, could be rotting and vacant like that house down the street, or on that road home from work. 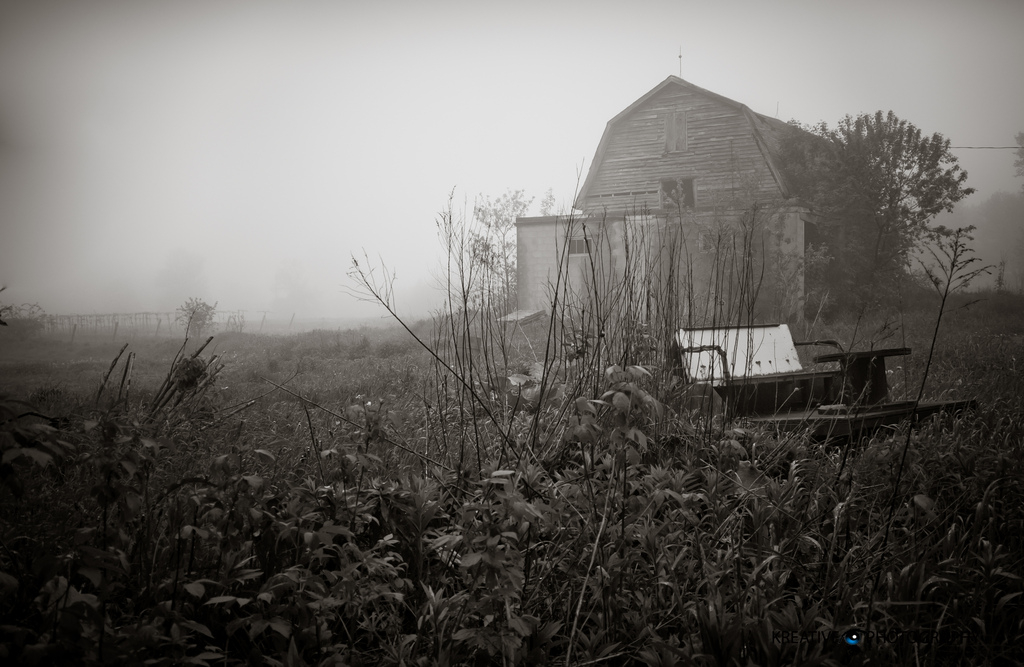 We don’t want to be reminded because we know most likely if the house is rotting, feeding the earth, so are we, for the house is a part of us and we are a part of it. And without an occupant the house will cease to be a home and leave a vacancy in place of life just as we will leave a vacancy becoming little more than a name on a head stone, a nameless face in a photograph on a mantle, a piece of silt in a churning sea, eventually washed away and lost, torn down, forgotten, replaced. Every paint chip on the shingles, every crack in the walk, reminds us that like the house we are all slowly dying and someday we will only be a memory silently haunting and watching as all we touched, all we loved, all we built, all we knew, joins us in our shared inescapable end. The end known as time, progress, that too will someday succumb and be lost either when humanity self-destructs, or the sun become a cinder in space.

Yet, still some of these structures are left standing, preserved and protected, written about and read about. I believe the reason for this is because memento mori , like all forms of horror, also serves to feed the cremation furnace of imagination in many and fills the need for others to come to terms with their eventual end and need for vinyl siding.

The story below is one I wrote recently which echoes my personal definition of quiet horror as seen above. I hope you readers enjoy it, and I hope you don’t run out after reading this and spend a fortune at your local hardware and home improvement store. 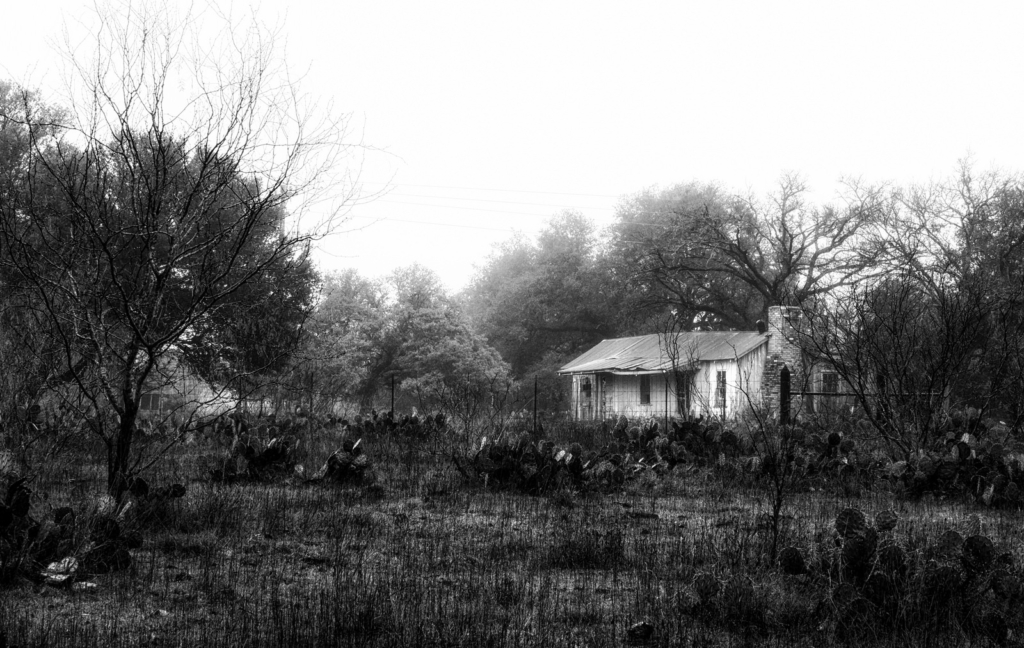 Driving the roads lined by corn and trees that led from her work to home Mary would always drive past a dilapidated farm house. The first time she saw it she was reminded of a neglected child. The kind she worked with in her job as a social worker in the city. The house shrank back from the road. Half hidden by diseased low hanging bows and grass almost as tall as the withered trees that helped obscure the house from view. Helped to keep it out of sight from the cars that would pass it by. It was as if the house was painfully shy, conditioned so by years of neglect. Wishing to go unnoticed. Broken nosed and bloody lipped. Red paint peeling, porch collapsing into the folds of boards broken by wind, rain, and the vacancy of inhabitants.

Mary drove past this neglected farm house night after night and soon felt an obligation to it. To help it. Like so many of the children she saw day after day, she could see that this house, like those children, needed someone. Someone warm and familiar, someone who could fill the void left by their previous care takers.

One night on a whim she decided to pull into the sunken dirt drive that led to the farm house instead of driving by like she usually did, just to see the extent of the neglect she would have to deal with if she was to help. She parked her car under the protective shadows of an oak, hollow as the house it aided in shielding from the brute force of the elements. She gingerly climbed up and onto the porch avoiding its sunken cheeks, black, hungry, and made her way to the front door left ajar as if to tentatively welcome her in. She pushed against the door and found her way inside having to squeeze through, the hinges half rusted allowing the door to only open half way. 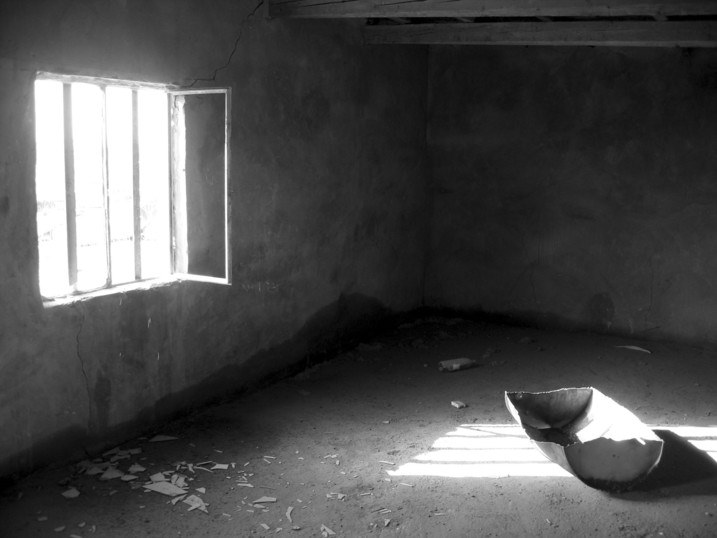 Once inside Mary found herself in a room inhabited by insects that had staked their claim in the walls and floor boards and settled in the rafters, groaning with the weight of a thousand young who, when mature, would have a thousand more. She pulled out a small flash light kept in her glove compartment and explored, every so often startled by the crunch of a leaf, a chunk of plaster, or one of the million or so tiny inhabits who had found refuge in the house’s corpse. She marveled at the ceiling, mouth open, allowing small arms of starlight to grope at the black that could be found taking up space in the house’s stomach and intestines. Every room, every closet, the kitchen, the dining room, the bedroom, the nursery. The black left nothing untouched.

When Mary first saw the farm house she saw an empty house. A house whose only inhabitants had multiple legs and no need for the silver still in the drawers waiting patiently to be polished. For the china, still bone white in the cabinet detailed in cobwebs and specks of dust, sparkling from the light of stars who had yet to realize they were dead and had been so for a very long time. But Mary was wrong. The house was not empty. The owners who had built the house when they first purchased the land were still very much alive. In the photos coated in a fine layer of mildew on the mantel, the dressers in the bedroom that they shared, on the walls in the nursery that they painted blue, an appropriate color for the child who one night when she was just starting to outgrow the color her walls were painted, failed to make it home.

No, they never left. And neither did Mary. Not ever again.