While it may not be a traditionally ‘good’ movie, the grindhouse Japanese horror comedy “Tokyo Home Stay Massacre” is an entertaining dose of insanity. 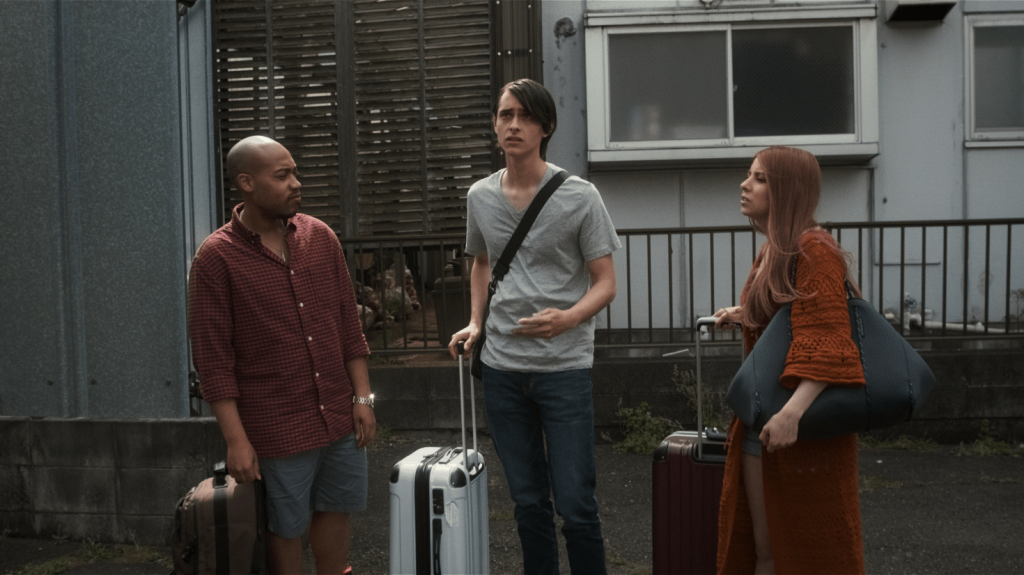 Sometimes I’m compelled to write a film review because of just how transcendent, expertly crafted, and deeply affecting a film is. Other times, the desire arises from a twisted place in the dark recesses of my brain that dares me to find words that begin to articulate the depth of utter insanity I have witnessed.

Just so we’re clear upfront, this review falls squarely in the latter camp.

Tokyo Home Stay Massacre is the kind of film I can almost guarantee will end with you saying, “What the hell did I just watch?” Thus, this review begins the only way it could… with another question: “Where the hell do I even begin?”

From CultureShock JAPAN and writer/directors Kenta Osaka and Hirohito Takimoto, Tokyo Home Stay Massacre is billed as an ode to the low budget, super gory, grindhouse films of the 80s. So, I’ll start by telling you I am a prime target for the kind of film this tries to be. And before we get into just how off-the-wall this film is, I’ll tell you that there is a lot of stuff that works — but only for the very specific niche audience primed to appreciate the mix of irreverent dark humor and Tarantino-esque, over-the-top, comedic gore.

If this film worked perfectly, this review would still come with a word of caution: definitely not for everyone. 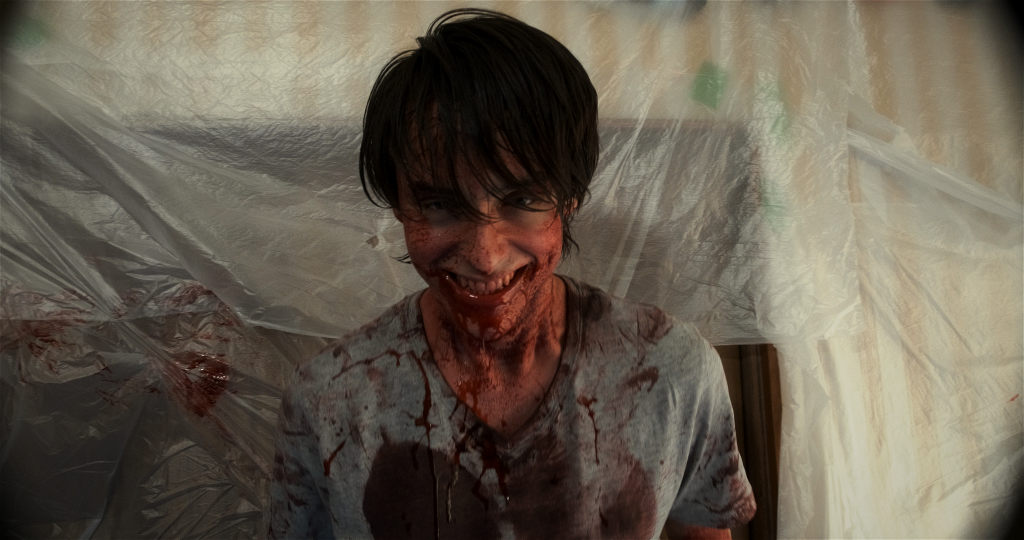 The fact that it also happens to be a complete mess in so many ways makes that word of caution a deafening siren.

I’m not saying don’t watch it because, for the right audience with the right expectations, it actually happens to be a ton of fun. But it’s also fairly incomprehensible, with a nonsensical plot and some of the most offensively bad (maybe intentionally…I honestly have no idea) acting I’ve seen in some time.

Let’s start with a high level of summary of what little actual plot there is. Three American college students and aspiring YouTube stars travel to Japan and end up trapped in a house with a demented Japanese host family who plans to offer them to their gods in a sick ancient Japanese ritual.

It’s not entirely clear why the trio of John (Alex Derycz), Spencer (Will Harrell), and Sarah (Diana G. Laura) decided to come to Japan. The official plot synopsis says it’s “to escape a sad past and have some fun”. I guess that description works as well as any. Truth be told, these characters are so wooden, so unbelievable, and so unlikable that you won’t give a damn about why they are there — or what’s going to happen to them.

The film begins with a quick and disturbing scene where we get a preview of what has happened to the previous visitors who stayed with this family. It’s the only scene in the entirety of this film that creates real horror atmosphere. It sets the tone for a film this never becomes… or even attempts to become. Immediately after, we get introduced to two of our main characters, John and Sarah, who have a very awkward exchange (the first of many) before being joined by Spencer, who only enhances the magnitude of the awkward vibe.

Then we meet our first Japanese character, the cab driver.

Like EVERY SINGLE Japanese character in this film, he’s mad as a hatter. 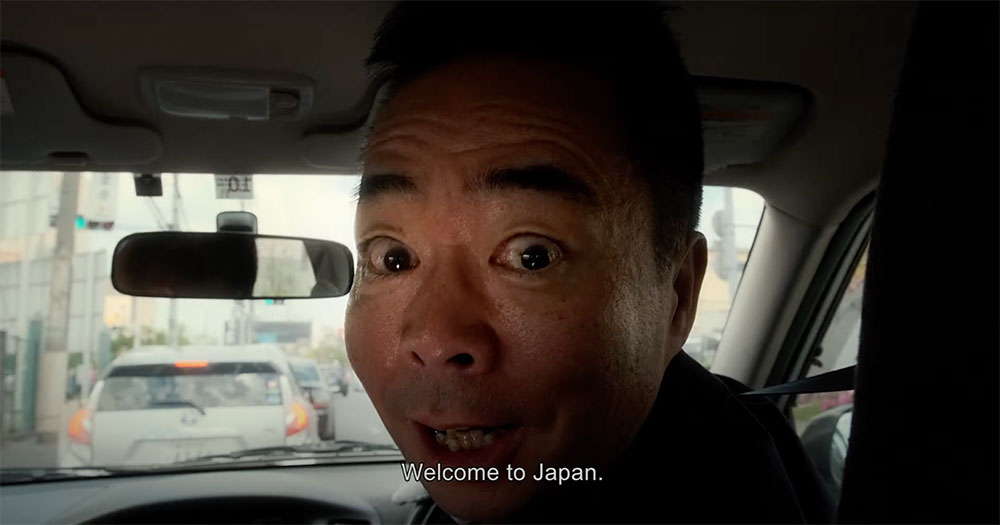 He shows tremendous contempt for the stupid Americans, acts erratically, and greatly overreacts — while the Americans greatly underreact. He arrives at their stop, turns to speak to his passengers (and directly at the camera) and says with wide-eyed lunacy, “Welcome to Japan!”

Cut to the title screen.

The Americans have arrived at the home of their Japanese host family. It’s not at all enticing from the outside, looking very different from the picture they were shown, and it’s even more unkempt and uninviting on the inside. But their host, the patriarch of the home (Miyatani), is friendly — a little (a lot) too friendly. He has a permanent manic smile, is overly animated, and is constantly rushing the trio around with unsettling urgency, ushering them inside and offering an odd tour of the home.

They are introduced to the elderly matron of the home (Kumi Yuuki) and the surly teen daughter, Chie (Karin Tokushige), both of whom treat their guests with disdain and refuse to even acknowledge them. This doesn’t really seem to faze the Americans much though. There’s mention of a brother, but we don’t meet him yet. We do get told about a tropey, mysterious room in the home that “should never be entered”. So, you know what that means.

At this point, my notes say, “Terrible acting and badly scripted.” If I wasn’t so completely averse to giving up on films early, I might have just turned it off. However, based off the description and pretty entertaining trailer, I assumed it would get better.

And it definitely does… in a way. But a lot depends on how you define “better”.

This film is short, a scant 75 minutes with credits. And still, it feels like there is a lot of useless padding in the first half that doesn’t really serve the plot or help develop the characters.

About 15 minutes in, a new character gets briefly introduced: the neighbor.

He serves no real purpose at all, other to enhance the weirdness and further establish that EVERY SINGLE Japanese character in this film is completely off their rockers. 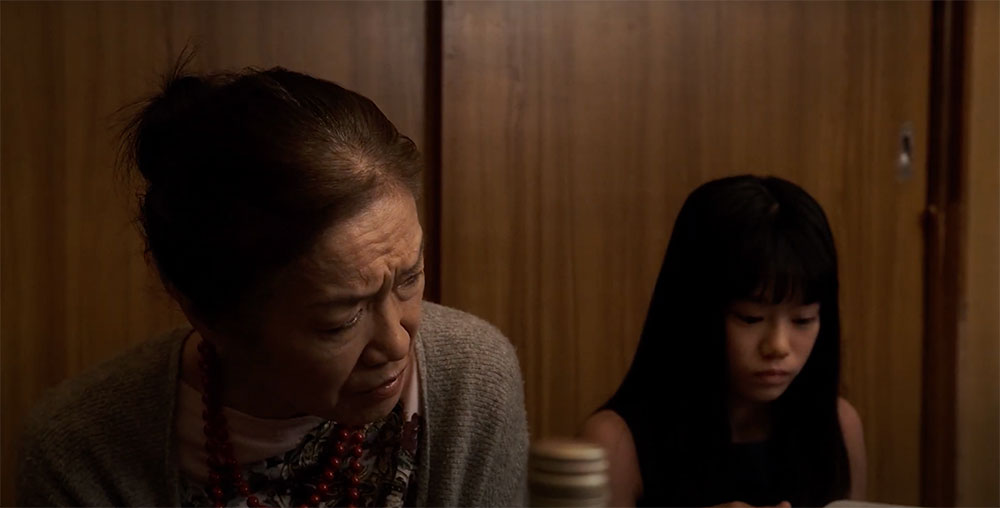 And they all despise Americans (that part doesn’t feel so crazy).

Less than 20 minutes in, and the family isn’t even trying to hide their nefarious intentions towards their foreign visitors. We get treated to an indescribably vexatious dinner scene full of clashing cultures and uncomfortable “let’s get to know each other” style introductions. Then the father tells the Americans they are going to help the family get back on its feet after falling on hard times. It’s not clear how they are to help, but they agree anyway.

Afterward, the grandmother abruptly arises from the table and announces, “It’s time.” Without a further word, the entire family gets up and walks out, leaving the Americans to themselves.