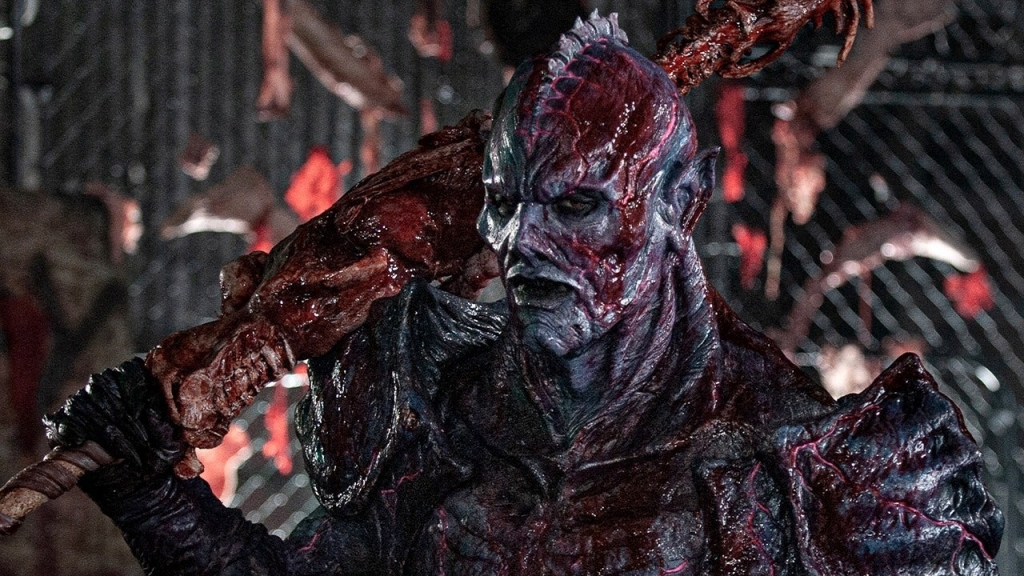 This movie is everything that’s right in the world.

Having a bad day? Watch Psycho Goreman, and I guaran-friggin-ty you will feel better.

If you had to do a plot synopsis for this film, it would be something along the lines of  this:

A pre-teen brother and sister accidentally unleash a 7-foot naked purple monster, who is hell-bent on destroying the galaxy, and they use a galactic gemstone to control him with hilarious consequences.

But, oh my god, that doesn’t even tell the half of it.

Psycho Goreman is absolutely dripping with coolness. Writer and Director Steven Kostanski (V/H/S/94) injects so many outrageously funny moments into this film that you just can’t help but fall in love with it.

This is helped immeasurably by the casting. 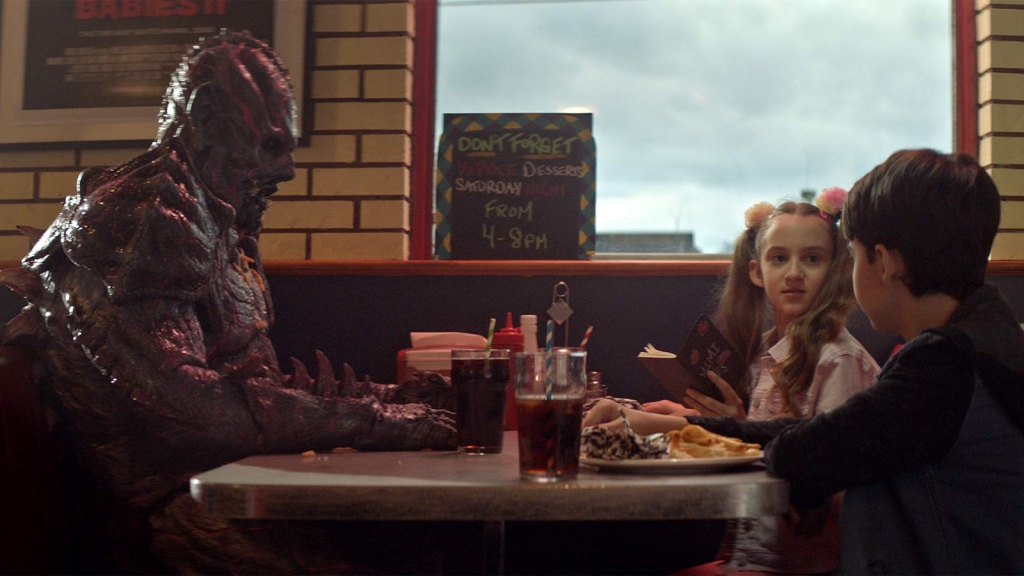 Every single person in this is perfect for the role.

We have to start with the absolute bat shit crazy Mimi. Nita-Josee Hanna, in her first role, has surely secured herself a stellar career with this absolute gift of a part. Mimi is as fearless, precocious, and self-confident as only an 8-year-old girl can be, and I’m absolutely here for it.

She has the lion’s share of the hilarious dialogue and Hanna makes the most of it, delivering the most outrageous lines so deadpan and believably that you’ll half wish you had Mimi as a sister when you were growing up (and half thank god you didn’t).

Playing foil to her is Luke, her slightly older and long-suffering brother (Owen Myre, NOS4A2) and the dynamic between the two of them is pure gold. Luke is nowhere near as out there as Mimi, but he goes along with her insanity mainly because she is a pure force of nature, and hey, that’s what brothers do, right? That’s not to say he is an unwilling participant, not at all.

He gleefully joins in when the brother and sister are trying to come up with a name for the monster they have unleashed, casually watches as Psycho Goreman (Matthew Ninaber) destroys some of his enemies and backs Mimi up on most of her plots and adventures. In short, he is a typical 10-year-old kid.

It’s easy to see where Mimi and Luke get their spirit from when we meet their parents, Susan and Greg (Alexis Hancey and Adam Brooks).

They are not quite dysfunctional, but they are well on the path. The scenes with the whole family are great. They might be a little oddball, but damn they have fun.

Susan joins Mimi in choosing clothes for PG at the mall in a scene so hackneyed you’ll fall down laughing.

PG tries on numerous outfits only to have Susan and Mimi reject them until they finally hit on one they love — a blue chambray work shirt, khaki pants, a straw cowboy hat, red bandana, and aviator shades.

And that’s not the only scene you’ll recognize from other movies. 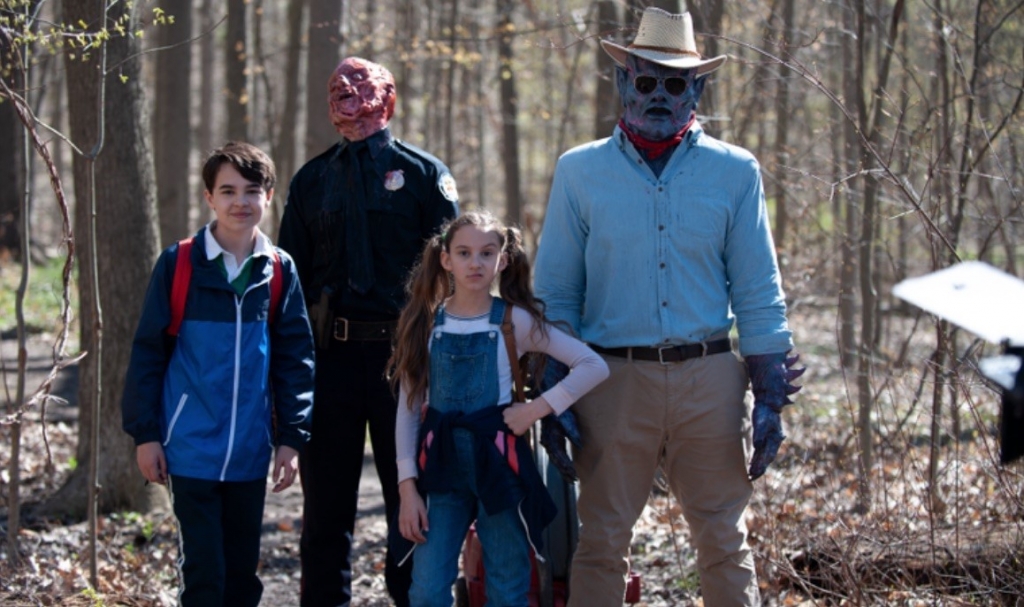 My personal favorite is the meeting of the Planetary Alliance, where Templar Pandora says the gods will help her defeat PG and another council member says that sounds like superstitious nonsense. Pandora picks him up by the neck and might as well have just said, “I find your lack of faith disturbing.” Just genius stuff.

No review of this movie — and, I know this isn’t so much a review as a love letter, and I make no apology for that — would be complete without a sample of the insanely funny dialogue. In the hands of a different writer, this movie could easily have been just an OK film, but Kostanski really lets himself go to town and gives us some absolute gems here.

Early on, Luke says to Mimi, “I think we’ve woken Grandma,” to which Mimi’s reply is, “That’s not Grandma, I’ve told you before, Grandma is in hell. Forever.”

And then there’s the line you’ve probably already heard everyone quote ad nauseum, but I can’t help myself; I have to bring it up. Mimi brings PG some magazines to look at and says, “Look at all the hunky boys!” PG replies, “I do not care for hunky boys……or do I?”

There is so much more than just those memorable lines, and honestly, this entire movie is quotable. It’s just so well written.

After the movie flies from one crazy situation to another, it’s finally time for the end when the fate of the galaxy is decided in a game of Crazy Ball, Mimi’s greatest creation. It’s a game so confusing no one but Mimi, Luke, Susan, and Greg can understand what the hell is going on. And even they aren’t too sure.

I’m absolutely aware that I haven’t done this movie any justice whatsoever. Please forgive me and go see for yourself why I’m so pumped about this one. It’s pure joy-inducing fun. I don’t say this lightly, but Psycho Goreman is a must-watch.

Overall Rating (Out of 5 Butterflies): 5
MORBID MINI
Psycho Goreman is the rare film I recommend without hesitation and consider essential viewing. It’s sweet, wildly original, gut-bustingly hilarious, and one of the most fun and feel-good movies I’ve seen in ages. There’s nothing else like it, and it’s nigh impossible not to love. It may not be scary, but if you’re interesting in escaping some real-life horror for a bit, Psycho Goreman is pure cinematic medicine; the cure for what ails you.