Instead of leaning into the insanity of its plot, “Intrusion” takes itself too seriously — but the audience has a hard time following suit. 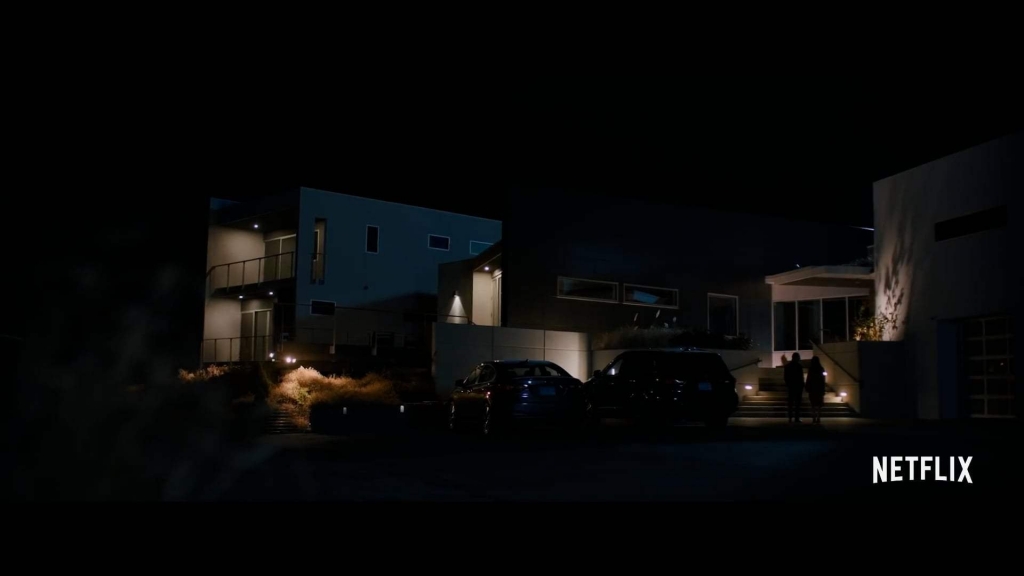 Intrusion is a difficult movie to discuss without going into spoilers which, ironically, may serve as a bit of a spoiler.

One could conceivably argue that the entire movie is a spoiler for itself, which I will go into more, once we’ve acknowledged the elephant waiting patiently in the corner.

But first, a civil agreement between us: I will drop a loud and proud warning when I am about to go into official spoiler territory.

Any reader who wants to maintain the integrity (a word I am using rather generously here) of the viewing experience will be able to simply avoid those paragraphs. We have an accord.

So without further ado, Intrusion.

Intrusion is a Lifetime movie wearing the clothing of a prestige drama. 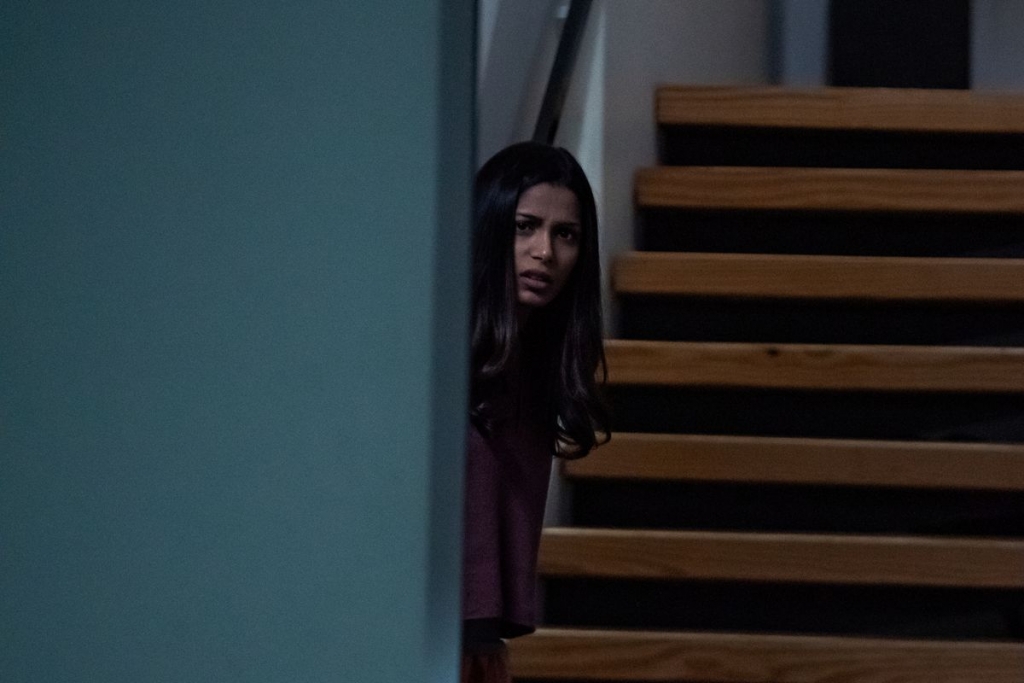 Our leads — husband and wife, Henry and Meera — move into their dream home, constructed by Henry. The house is broken into while they are out on a date night where they have, incomprehensibly, left their phones at home. Nothing is removed from the house, save those phones, making the crime even more baffling and unnerving to Meera.

Alright, Intrusion, I’m with you so far.

Yes, the dialogue is stilted, and sure, the explanation as to why they would leave their phones at home is, well, terrible. Henry claims they need to focus on each other while they are out on their date to drink wine and play Scrabble — and that is fine. Except. Anyone would simply turn their phones off. No one would just leave their phone behind. What if their car broke down? What if someone got hurt?

But alright, we’re going to embrace the nonsense.

Meera’s anxiety over the house being broken into and having nothing taken could be a really interesting dynamic to explore. Anyone with a true-crime background knows about the Manson family creepy-crawling, where they would break into people’s houses and move stuff around, not take anything, simply rearranging to mess with the homeowners. It’s a distinct sort of psychological torture, designed to create a paranoia that a movie could easily be built around.

Unfortunately, Intrusion opts not to explore that. Instead, it introduces a surly and disinterested small-town cop, and an almost immediate subsequent home invasion. Henry shoots the intruders, and seems relatively unaffected, leaving Meera confused and disturbed.

Treading lightly, what follows is a narrative slurry of suspicion, lies, a missing girl subplot, and absolutely no one behaving in any way that makes moderate sense. 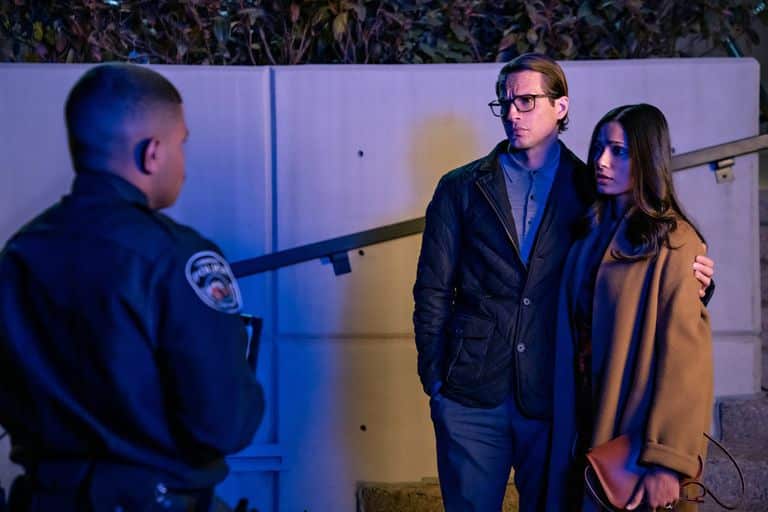 Meera being unnerved by Henry’s behavior? Yes, that follows.

Spearheading a solo investigation when she is, in fact, a therapist? Absurd.

But here’s the thing. It’s the kind of absurdity that one not only accepts but embraces in a Lifetime thriller; that’s half the fun! Intrusion had the unintended effect of demonstrating just how tricky it can be to make silly trash fun. Because Intrusion is many things, but “fun” isn’t one of them.

Intrusion strives for an unearned sense of gravity. Meera is given a history of breast cancer that adds absolutely nothing to the plot. It is intended to demonstrate that Henry was a dedicated partner who took care of her when she was ill, but it feels more like script padding than character development.

This is endemic to the movie at large. There are serious dramatic flourishes that are simply too at odds with the tawdry nature of the film.

Last chance to turn back. Here we go.

Intrusion’s biggest problem is that it treats what is plainly, blatantly obvious as a twist. 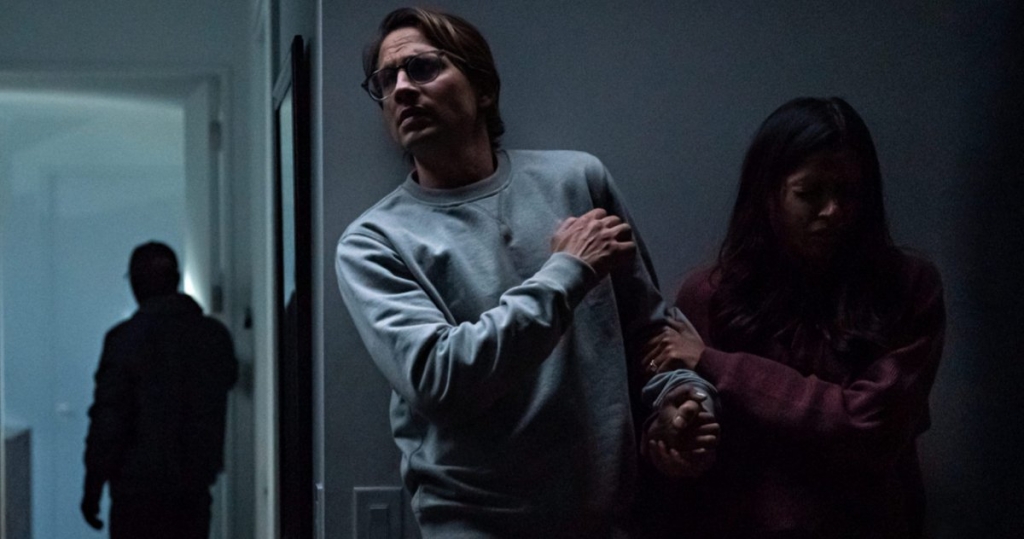 Ten minutes into the movie, I had written in my notes: “The husband did it. I don’t know what ‘it’ is yet, but he definitely did it.”

And I was right. He did it.

Direct story-telling is better than fine. It has power and gravity. Making it clear that Henry is up to no good is a perfectly valid choice. However, treating that discovery like a reveal is narratively sloppy.

The greatest disappointment about Intrusion is that the bones of an interesting story are there. Turning a home invasion story into the other perspective of a father searching for his missing daughter? That’s an unusual choice, and a fun sort of “through the looking glass” approach. Stories about people who are horrified to find out their partner’s been doing horrible things while they’re together? Always interesting.

But Intrusion doesn’t commit to either of those premises.

Henry transmits “Hi, I’m the villain” so loudly that one questions how good a therapist Meera must be if she’s not picking up on those vibes. It’s ok to accept that the character is oblivious to them because it’s what the narrative requires. However, the movie is asking us to be similarly blind. To accept that Henry is maybe a little fishy, but also maybe not. My certainty that he was the antagonist never waivered. There was simply no other possibility.

Netflix aired this as part of their Halloween line-up; the thinking there seems flawed. 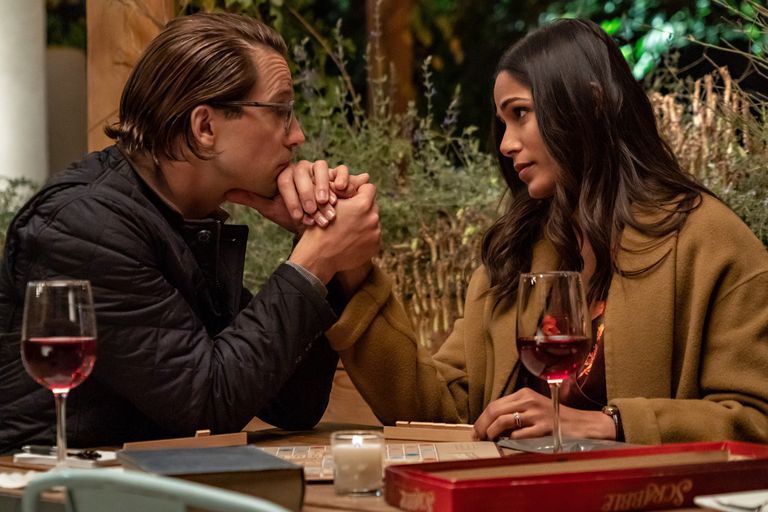 Intrusion is not scary. It isn’t designed to be.

One might generously call it a thriller, with little pushback from sticklers for accuracy. But it’s definitely not horror.

After the inventive fun of Nightbooks, Intrusion is an anti-climactic letdown. It would have benefited greatly from leaning into the camp of Lifetime and embracing its destiny-to be kind of trashy but ultimately fun to watch, instead of a relatively joyless slog.

It’s still early in the season, and Netflix has several more movies to roll out, so all is not lost. We’ll see what they give us next week, and in the meantime, maybe just watch Stalked by my Doctor.