New on Blu: The Bird With the Crystal Plumage

In 1970, Dario Argento made his debut with a giallo classic, THE BIRD WITH THE CRYSTAL PLUMAGE.  In 2017, Arrow Video releases this legendary film on Blu-ray, lovingly given a 4K remaster directly from the original film negatives. Heralded as one of the great films of any era, Arrow brings a definitive look at the film itself and the struggle of a creator fighting producers and cast to bring his vision to the screen.

THE BIRD WITH THE CRYSTAL PLUMAGE follows an American writer, Sam Dalmas (Tony Musante), living in Rome with his girlfriend, who witnesses an attempted murder at an art gallery.  The authorities believe this is the work of a serial killer, and as Sam is the only witness they have to the killer’s crime, they confiscate Sam’s passport to keep him from leaving.  In, what feels like a nod to Carol Reed’s THE THIRD MAN, Sam begins to investigate the killer in conjunction with the police investigation.  Sam follows false leads and more killings, placing himself and his girlfriend in harm’s way, until the shocking truth is revealed and the killer uncovered.

THE BIRD WITH THE CRYSTAL PLUMAGE has everything we’ve come to expect in a giallo: an unidentified killer who wears black gloves and a trench coat, red herring suspects, brutal murders, and near nude or nude women who are targets of the killer.  Giallos are pulp crime novels come to life.

Dario Argento shows a sure hand in his debut film.  While THE BIRD WITH THE CRYSTAL PLUMAGE is lacking some of the explicit violence and nudity present in his future movies, the groundwork visual style of Argento is laid out here and informs all his future work.  One only needs to look at classics like SUSPIRIA and DEEP RED to see that much of Argento’s vision was captured in THE BIRD WITH THE CRYSTAL PLUMAGE, and carried through the rest of his career in more extreme ways.

The score for THE BIRD WITH THE CRYSTAL PLUMAGE was created by legendary spaghetti western composer, Ennio Morricone. For this film, Morricone employed unusual instrumentation techniques and improvisation to create a soundtrack that is a kind of jazz acid trip.  The score is much different than Argento’s future collaborations with Goblin, but the chaotic jazz score is the perfect match for this movie. If there is one complaint about this Limited Edition release, it is that Arrow did not provide a score only track for the Blu-ray.

The Limited Edition Blu-ray/DVD combo from Arrow Video is a must have in the collection of all horror and giallo movie fans.  This release is Criterion-like in its care for the picture and sound transfer as well as the extra features included which delve into the film itself, the giallo genre and Dario Argento’s long film career.

There are two features of note in this collection: 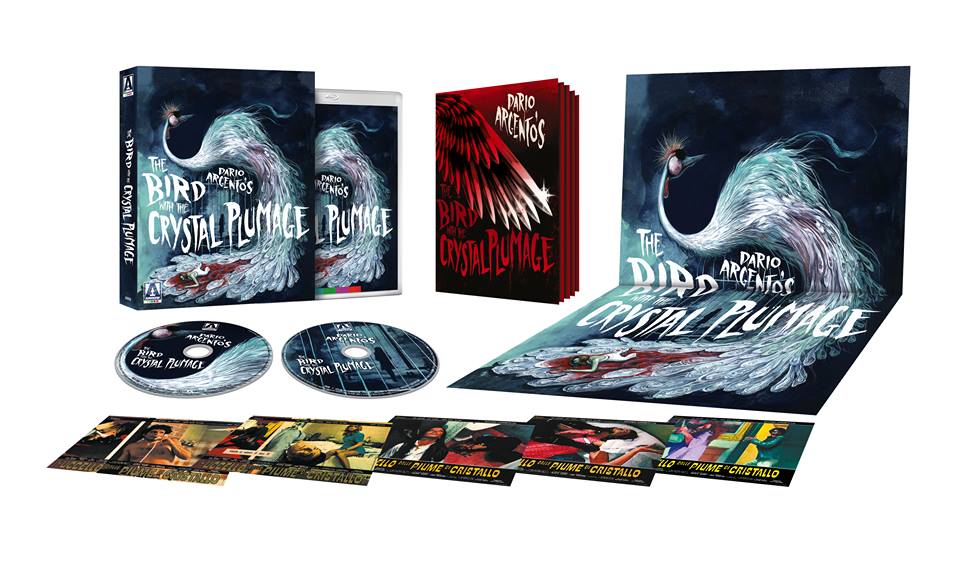