Smart and surprising, “Survival Skills” is a wickedly funny, wildly inventive tale that delivers a bitter pill with a heaping spoonful of sugar.

Since the dawn of time, society has been divided between those who follow the rules and those who break them.

Written and directed by Quinn Armstrong, Survival Skills bills itself as lost training video for rookie police officers from the 1980s. That may seem like a strange sell for an audience living in one of the most tumultuous times for law enforcement since the ‘60s. But, what may at first glance seem like “sympathy for the devil” is actually a searing critique of a system that dehumanizes victims and prioritizes rules and red tape over actual justice.

A film that begins as a wonderfully charming and campy parody of ‘80s educational video slowly transforms into a Lynchian nightmare that maintains its strong comedic sensibilities, only to make the unexpected sucker punch of its darker twists and turns hit that much harder.

Survival Skills begins with a dramatic narration that makes it clear we’re living in a world of black and white. It’s a world where everything makes sense and works out if you just follow the rules and remain honest, diligent, and committed to justice. In this world, a veteran officer (Stacy Keach) narrates a training video designed to help the graduates of the Middletown Police Academy prepare for on-the-job success. We’re introduced to our avatar, Office Jim Williams (Vayu O’Donnell), as he prepares for his first day on the job in 1988’s American suburbia.

Full of naïve optimism, 30-year-old Jim is eager to get out there and do some good.

O’Donnell initially plays Jim with a comically absurd, wide-eyed enthusiasm and an intentionally wooden performance designed to reflect his unflinching belief in good vs. evil and his faith that doing the right thing always results in the right results. 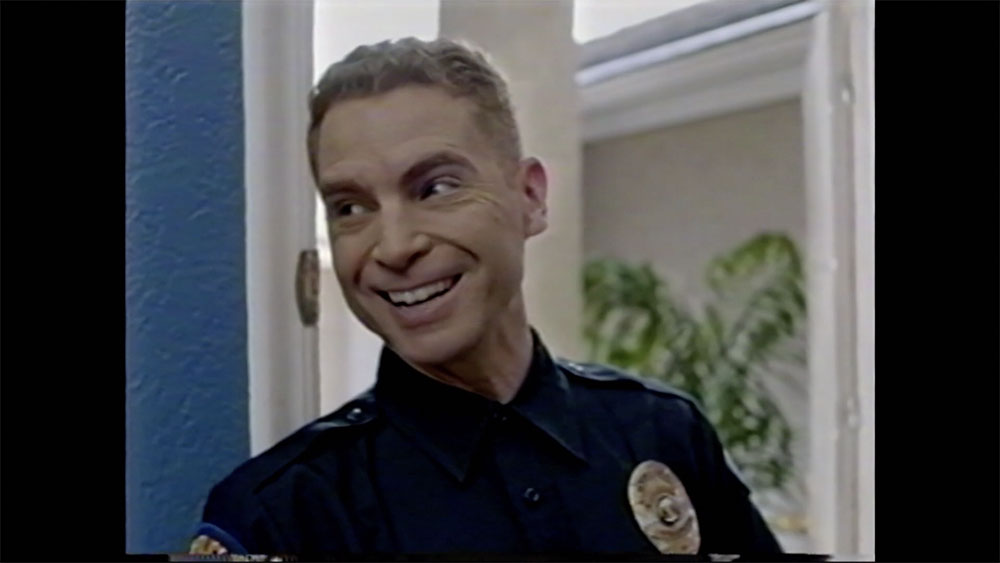 His no-nonsense, world-weary partner, Allison Lohmann (Ericka Kreutz), plays in sharp contrast to Jim’s nearly inhuman positivity. She isn’t thrilled about being saddled with the rookie — especially one she refers to as “pretty keen for an old guy”. It’s clear Allison is confused by his behavior and silently wonders, “Why hasn’t the world beaten you down yet?”

Jim’s first call brings him to the Jenning home, where he responds to a heated domestic dispute. When he arrives, he’s immediately thrust into extreme chaos. And the VHS tape we’ve been watching becomes overrun with static, a creative storytelling technique often repeated when things take a darker turn and Jim’s world of rules and order gets thrown severely off track.

After the yelling stops, Leah Jenning (Emily Chisolm) is visibly shaken, but she silently goes along with her husband Mark’s (Bradford Farwell) version of events. Nothing to see here, move along. Meanwhile, their 16-year-old daughter Lauren (Madeline Anderson) also seems to be hiding something. Jim can’t understand why they can’t just arrest the clearly guilty Mark, even if Leah refuses to press charges. It’s his first taste of the frustrating failures of the confines he’s forced to work within. At this point, our narrator interrupts to explain that sometimes officers can become so heartbroken that they attempt to break the rules and contact an abused party. But that only makes things worse.

Sure enough, Jim eventually does go off script, as the film slowly begins to shift from absurdist, surrealist parody to a powerful dissection of the corrupt and broken justice system — especially the way in which it so often fails women. 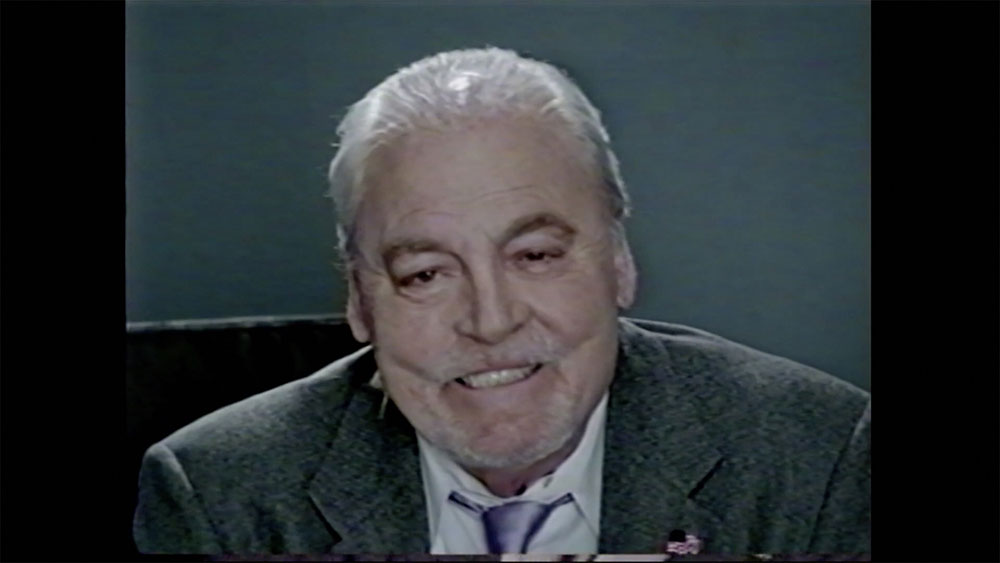 In fact, the film was inspired by Armstrong’s own experiences of working in domestic violence shelters, and it goes to some very dark and heartbreaking places.

Even Jim’s wife Jenny (Tyra Colar) isn’t allowed any personality or agency outside of caring for her husband and following an emotionless routine of making jam and sending Jim off to work. As soon as he leaves, she appears lost and unsure what to do with herself. And when the pressure of Jim’s job becomes too much and she decides to leave him, she has to ask, “Is this my scene now?”

As the film progresses and Jim starts to replace a strict adherence to the rules with his own subjective moral judgements about right and wrong, Keach’s narrator begins to interject himself.

No longer content to just tell the story, he wants to control it as well. He stresses the importance of never getting personal, and he seems to take Jim’s well-intentioned meddling as a personal affront. Fed up with Jim’s bad decisions, the narrator even attempts to bring in another officer to focus on for the remainder of the training video. This leads to a pretty funny scene in which Officer Jane (Tatiana Carr) tries to break up a protest. But the cameraman spots Jim in the distance and decides to follow him instead, further enraging the narrator.

As Jim’s world starts to unravel, he confides in Allison that he fears the assumptions he’s made about people and life are all wrong, and it’s devastating watching him realize that justice doesn’t always prevail, even when you do everything right. Allison responds that people are essentially, inherently terrible, to which a heartbroken Jim replies, “Allison, I don’t think you should be a police officer.”

It all culminates in a powerful, gut punch of an ending that left me reeling. 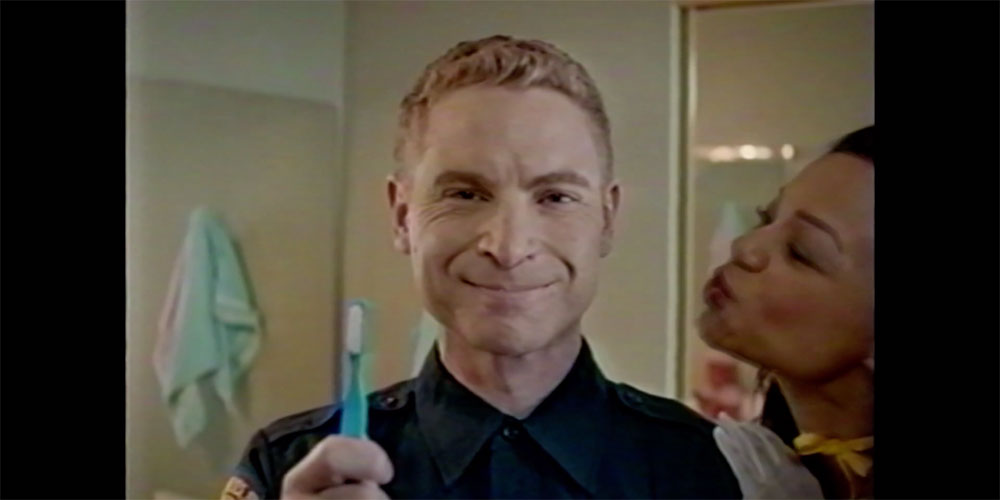 Survival Skills takes numerous bold and unconventional narrative risks, and it pays off in dividends.

Presented in 4:3 with horrible CGI, deadpan narration, bad tracking and tape hiss, it absolutely nails the old VHS aesthetics. However, this approach never feels like a gimmick. Instead, it’s used as a creative and extremely effective storytelling device — contrasting the sterile, artificial construct of Jim’s role as a mindless avatar with moments of real human connection and complex moral dilemmas.

What makes Jim’s story so compelling and powerful is that he begins as the very definition of a “good cop”. He joins the force for all the right reasons; to protect and serve. He wholeheartedly believes in the principles of positive law enforcement outlined by the narrator at the start of the training video. But as reality starts to seep in through the cracks of his robot-like veneer, he begins to buckle under the pressure of a system designed to crush the spirit of its best and brightest.

Ultimately, Survival Skills is a scathing indictment of a system in which the most important “survival skills” needed for success on the job are apathy and inhumanity.

The fact that it manages to deliver the gravitas of this message so deftly while remaining both a laugh out loud comedy and a heartfelt character-driven drama is nothing short of a monumental achievement.