I knew from the moment she answered the phone that this interview with Elena Kampouris, star of the new Facebook Watch series “Sacred Lies“, was going to be incredible.

Elena has an enthusiasm that is unparalleled, and it’s clear that she legitimately loves her job. And she should, because with the success of her new show, plus her roles in My Big Fat Greek Wedding 2 and Before I Fall already in her back pocket, Elena is about to become a huge household name. Born in New York in 1997, this girl knows success, and she’s not even 21 yet.

We discussed “Sacred Lies”, women in film, her love of horror films, her respect and knowledge of the Chinese culture, and even her bulldog, Petunia. 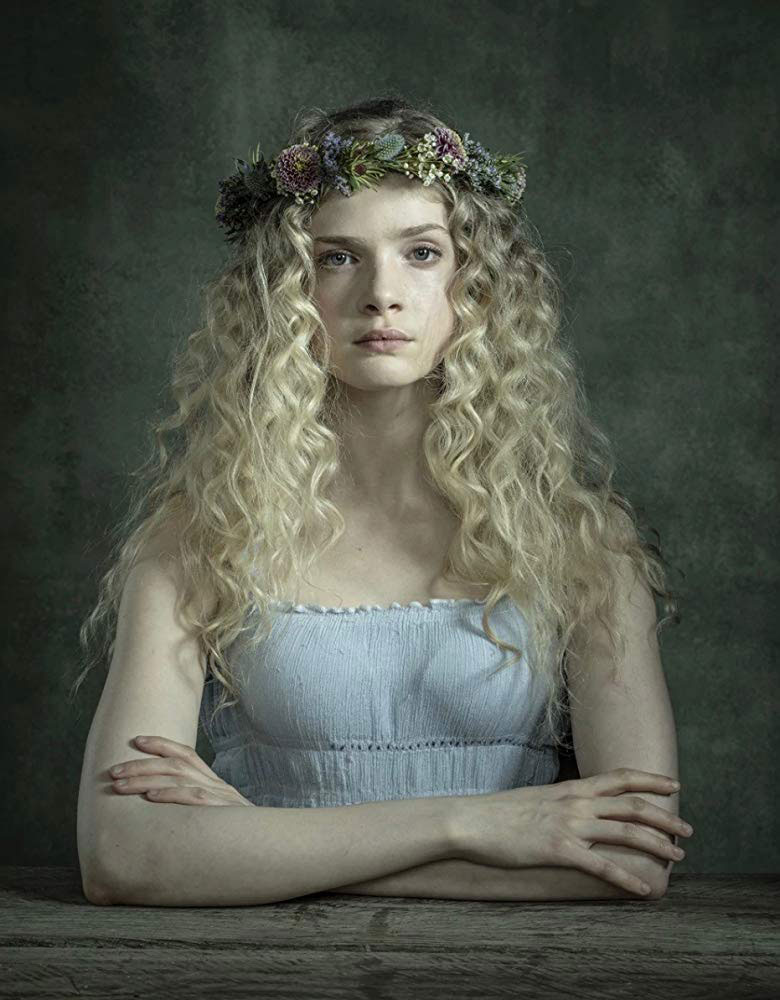 Tiffany Blem: I just wanted to tell you that I am caught up on the show through episode eight, and it’s just so fantastic.

TB: So I am super excited to get to do this, this is really amazing to get to talk to you.

EK: Oh, that’s so sweet of you, and I’m so happy that you saw it. So you saw through eight? What was your favorite aspect of it? What’s something that stuck out to you? I’m so curious because nobody else has gotten to see it. What did you respond to the most?

TB: I love how intense it is, and I love how they showed when your hands were cut off. It was so emotional, and I love your emotional range. One thing that I really noted, you gave the most genuine smile for the first time in the serious when you threw your prosthetic hands away. And that really stood out to me. When Angel walked up to you at the drinking fountain outside, and you gave her this smile, it was the most genuine scene in the show up to that point. 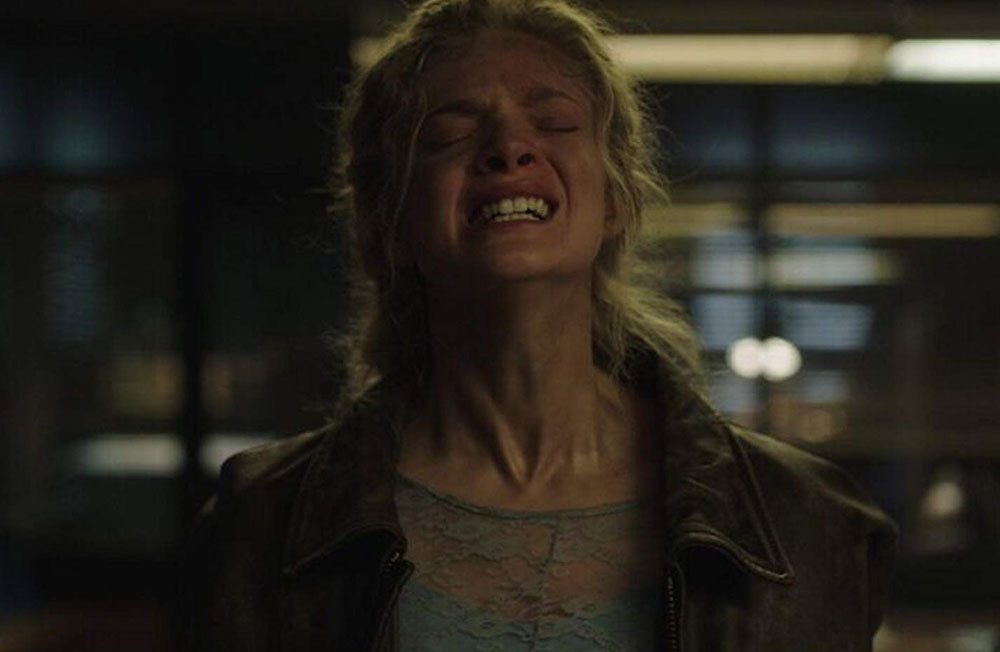 TB: I did! I actually watched it for the second time last night, and what I liked is the different variations of the bleep — so you could tell that there was more than one person participating.

EK: Yeah! That was actually done on purpose. They wanted that.

The whole thing was it was sending a message about how these girls all had trauma, but they’re empowered by it, and they can band together and unify. And even though there’s no answer to fixing it or healing them 100%, it’s nice that they can cathartically let it out in a moment of, “Ugh!” Also, it’s a commentary with the bleep because they could never air the curse word, and it’s a commentary on when girls were censored in our speech.

It was cathartic, and it’s something that you don’t ever shoot a scene like that. It was such a unique experience to have achieved something like that, and also to get to scream at the top of your lungs. And you’ll notice in some later scenes that my voice is kind of scratchy. That is because of that scene.

TB: I wanted to ask you, what aspects of Minnow’s character were intriguing to you? What made this a character you wanted to play?

EK: Oh my gosh, everything about her. She’s a character I had never seen before — other than the fact she’s strong, she’s smart, she’s curious, she’s a little bit dangerous and violent. She’s flawed, but she’s also a little bit admirable. Also, the intriguing aspect is how she’s going into this new world. I  was kind of looking at it like, “Ok, how can I speak Minnow’s language?” Because outside of the cult, the language probably sounds a bit different.

I’m fascinated by language. I know sign language, I speak Mandarin. So I thought, ok, she’s probably hearing sarcasm differently. She’s probably not used to that verbal fuse, that social fuse. The beginning has got be a perpetual headache, but she learns very quickly. That was really interesting just to play with that.

TB: She is a great character and definitely not something you see very often. I like a strong, female characters, so I’m really glad that this is something that is being made available to everyone.

EK: Yeah! And that fact that we’re doing an amputee heroine…I don’t think that’s something we’ve ever seen before. That’s so important.

TB: The role of Minnow seems that it would also be emotionally exhausting. How did you prepare for something so intense?

EK: You know, with every role I play, I just forget it all and live it, and experience it. To be honest, I never knew what capillaries were until I did the hand chopping scene, and the next day I had a hundred little red dots surrounding my eyes because the capillaries burst from the loud scream. I looked like I had chicken pox. They went away the next day, but it takes a toll on you physically, and you don’t even realize it.

But you know, it’s so much fun, and that excites me, that’s the stuff you crave. So I just wanted to do it. And, ah, what an incredible opportunity!

TB: That was a great scene with so much emotion. Just the look on his face and your face…that was amazing. And I also read that you worked with a woman, a dancer, who had lost her hand around the age of your character. I read she worked with you on being pretty accurate about it. Was it hard to not be able to use your hands in the show? Was it difficult to get around, not being able to do what you’re used to since you’re not supposed to have hands?

EK: What’s so funny, Kristie Sita is her name, she deserves all of the credit. I want to be sure you get her name, Kristie Sita. She’s a dancer. She’s incredible because she did lose her hand around this age. She took something that happened to her, something tragic, and made it into her strength. She has a way of inspiring people.

She helped me three weeks ahead of shooting. We worked together through every single scene discussing how to deal with it physically, but also psychologically. She helped me convey what my character was going through by channeling what Kristie had gone through on her personal journey. And then, she was there every day of shooting, watching the monitor for any little thing that didn’t look right or natural — making sure we were true to the character’s emotional journey.

She was so crucial to the entire thing and we bonded on and off set. She made all of this. I owe it all to her for being there, supporting me, and opening up so much. Because that’s a lot of personal stuff, you know, and nothing was off limits. She let me ask her any question.

Is it hard to not have your hands? Oh my gosh, 110%. You take it for granted. I have to say, it’s so frustrating when your hands are tied up. They were wrapped up all of the time or gloved up, so I couldn’t scratch my face, or adjust my clothes, or even drink from a water bottle. Luckily, we had such a kind and caring crew and cast members that would help me. It was hard to even to go to the bathroom. It makes you sweat, it makes you feel claustrophobic not having your hands.

It’s a really weird feeling, and it’s a mental challenge we don’t ever think about it. But when you deal with it, it’s like, “Oh my gosh, I can’t imagine what it’s like living with this every day.” I was just experiencing it for the hours that we were shooting on set. I couldn’t take them off because it would take a lot of time. But can you imagine having to learn to work with it? It makes you appreciate your hands, appreciate how strong people like Kristie are. She’s out there going through that and overcoming it.

TB: I love that attention to detail.

EK: Yeah, it was good to use that frustration too. If you’re frustrated, it only helps the character.