Did you miss Panic Fest Tricks & Treats and wish you could have seen some of the killer short horror programming? Well, now you can!

If you’ve been following our Panic Fest Tricks & Treats Film Festival (#PanicTricksTreats) coverage, you’ve been introduced to more than a dozen absolutely amazing shorts we hope you’ll seek out as soon possible — ideally catching some of them as they make their way through the festival circuit. Now that so many festivals are virtual this year, there’s no excuse not to seek out a few and discover some of the best rising talent in genre filmmaking.

With that said, we are thrilled that a large number of shorts showcased at this year’s Panic Fest Tricks & Treats are available for free to watch right online, RIGHT NOW! So clear a few minutes in your schedule and go watch one or more of these seven, sinfully good short films. 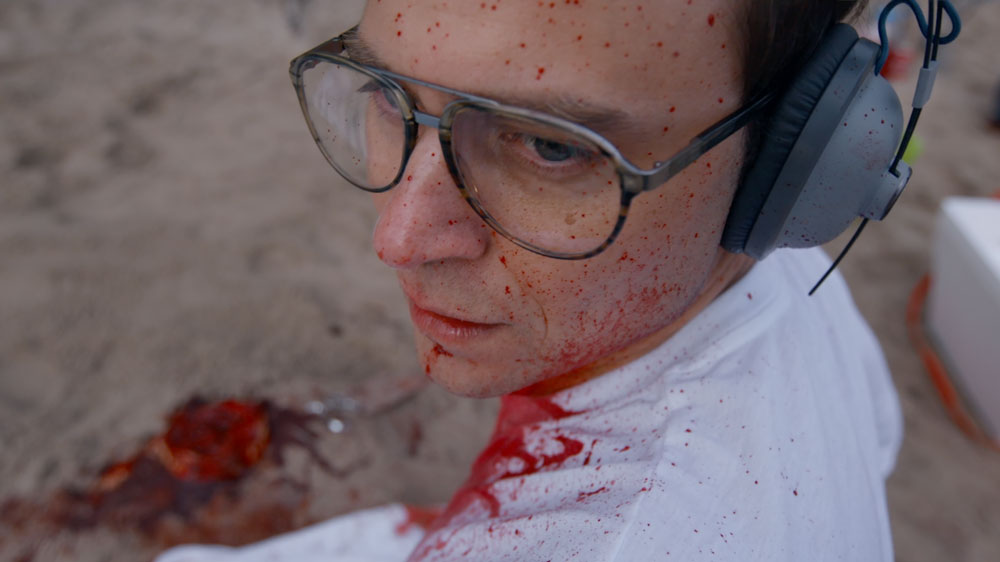 A young girl convinces her father there is a monster in her closet.

We begin with a great shot filmed from under the bed in a little girl’s room. Someone is walking around, looking for something, as a suspenseful score builds up tension. Suddenly, a man looks under the bed dramatically. The creepy music subsides as the man pops back up and cheerily informs his young daughter (Aislynn Curry) that there’s nothing under there. He tucks her in and tells her to go to sleep. As he goes to leave, she points to a nightlight. He turns it on and hands her a stuffed animal to keep her company.

After he leaves and heads back down to finally relax on the couch with his husband, the closet door creaks open, and the frightened girl wakes up screaming for her dad. Her frustrated father tells his partner, “Tomorrow night, it’s your shift,” before begrudgingly returning to his daughter’s room. When he asks her what’s wrong, she points to the closet and tells him Mr. Pointy lives inside. Strangely, that’s the name of the monster that her father used to think lived in his closet when he was a boy.

I had a great time with this one, and it’s a perfect example of how to tell a compelling and creative story with only a few minutes and really simple but effective execution.

At just four minutes, this is a very fun, very clever and well-acted short with a great ending I didn’t see coming.

A desperate man struggles to sleep after the death of his wife.

Though only two minutes, directors Adam Raynes and Dillon Novak, manage to tell a powerful and deeply affecting story with their short film Insomnia.

The short starts out oozing horror, as a man (Chris Kendall) slowly drags a shovel across a garage floor against a backdrop of pouring rain outside. It feels ominous as if something terrible has just happened.

Then, as the man goes back inside, the tone dramatically shifts as Harry Nilsson’s “Without You” begins to play. As the man shuffles to the bedroom, we see a bevy of condolence cards and flowers on the kitchen counter. The thunderstorm rages as the music swells, and we get to the perfectly sublime, gut punch of an ending.

A young boy is punished by his health obsessed older sister for eating candy on Halloween.

It’s no surprise that the fine folks at CRYPT TV — an entertainment company founded by Jack Davis and Eli Roth that’s focused on developing, producing, and distributing horror themed digital content — would release the perfect Halloween short. And even though All Hallows’ Eve may have come and gone, any time is a good time to enjoy this gloriously gruesome and thoroughly nasty bite-sized treat.

A young boy tries to sneak past his sister doing yoga in the living room. He’s carrying a bag of candy. She spots him and gives him an evil glare. He promises he wasn’t going to eat it all, and she warns him how toxic and addictive those sugary sweets are. She tells him he should want to be healthy like her before tossing the candy in the trash.

Later, he sneaks in and starts devouring the sweet treats straight from the garbage. When she catches him mid feast, she reminds him what their parents did to her when they caught her smoking. Then she decides to teach him a similar lesson…with explosive results.

Supernatural forces loom large in the forests of upstate New York as Sarah, Harry and Tom struggle for survival.

In a stunning opening shot, a man named Tom is walking alone across a wide-open field next to a lush forest, singing an Irish folk song. Suddenly, he’s shot dead. Cut to a woman named Sarah lying in bed, staring at the ceiling before her alarm goes off. She gets in a car with a man named Harry, and the two meet up with Tom — now alive and well — for an early morning hunting trip.

This surreal, disorienting film travels back and form in time as characters claim to experience déjà vu and strange, supernatural events take place. Extraordinarily beautifully shot with a haunting score, the short is both disquieting and thought provoking. In one scene, Harry finds himself under the control of unexplained forces. He tells a terrified and confused Tom that “it will all make sense.” But there’s very little satisfying answers for Tom or the viewer in this hypnotic but bewildering sci-fi thriller.

Ten, Thirteen, Twelve is a captivating and handsomely made film that’s well worth a watch.

A man stalks his prey on the streets of Los Angeles, but on this occasion picks the wrong person to mess with.

It may actually be a music video for the indie rock band Asian She for their song “Competitive Mourning”, but the filmmaking team known as Mando + Kevin also deliver quite a satisfying and wickedly fun horror short.

The film begins with a woman running while holding her throat. She’s covered in blood. A man coolly puts on his headphones and starts stalking her while wielding a mallet.