The highly anticipated, much buzzed about indie slasher ‘Pitchfork’ comes to VOD this Friday the 13th, along with a killer new behind-the-scenes featurette 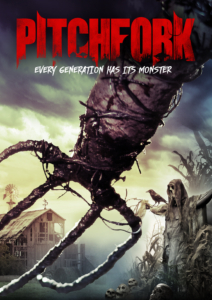 We recently had the opportunity to review Glenn Douglas Packard’s well-received indie horror Pitchfork (read our review here), and we absolutely loved it. An ultra-low budget film, made with only one camera and shot in just 21 days, Pitchfork has struck a chord with film fans, horror buffs and filmmaking aficionados alike. It looks like a much bigger film than it is, and audiences and critics alike have been buzzing about the film since its debut on the festival circuit.

Having recently shared a life-changing secret with his family, Hunter recruits his friends to come with him from New York City to the farm where he grew up as he faces his parents for the first time. As the college students enjoy the fresh air of Michigan farm country, an older, more dangerous secret slowly emerges. While Hunter navigates a new place within his conservative family, a vicious creature from their past descends on the farm, putting the unsuspecting city kids in mortal danger as they start being stalked by a twisted, dark, and disturbing beast, Pitchfork.

Now you can see for yourself what all the buzz is about. Click here to watch the film on iTunes.

To coincide with the VOD release of the film, the filmmakers have prepared an awesome new behind-the-scenes featurette, “Making the Monster: Pitchfork”. The featurette shows just how much Packard and his crew were able to do with very limited resources. It’s a must watch and helps us appreciate this film even more. Check it out below.