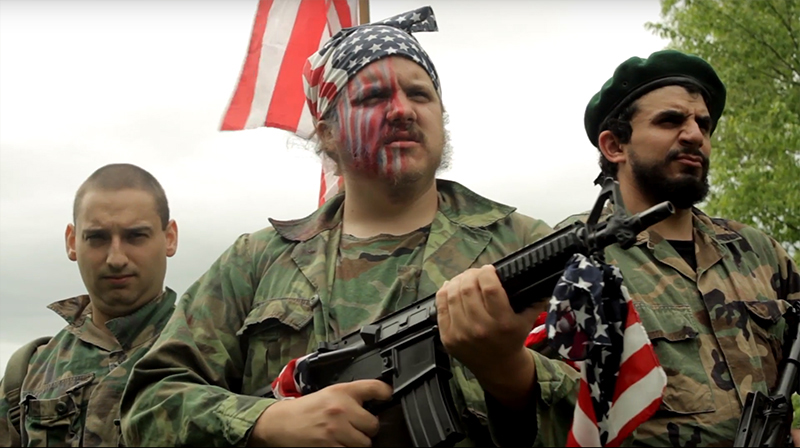 Well, they’ve done it boys. The Russkies have bombed us into a nuclear war, leaving us only with our access to wifi, radio signals, and a huge surplus of your uncle’s military supply store knickknacks. Also untouched: our American flags. They still billow proudly, all four million of them, roughly a third of which are featured in this movie. They hug sweaty dude’s heads as bandanas, they are used as rifle slings, they hang on a basement’s wall.

The post apocalypse in which our story takes place almost always looks like a state park or various backyards, which is kinda nice. This means you can totally still have barbecues and sit around drinking beer, as long as you’re not averse to commando sharks showing up and ruining your day with a terrible fish pun one-liner. Oh, and then shooting you dead. 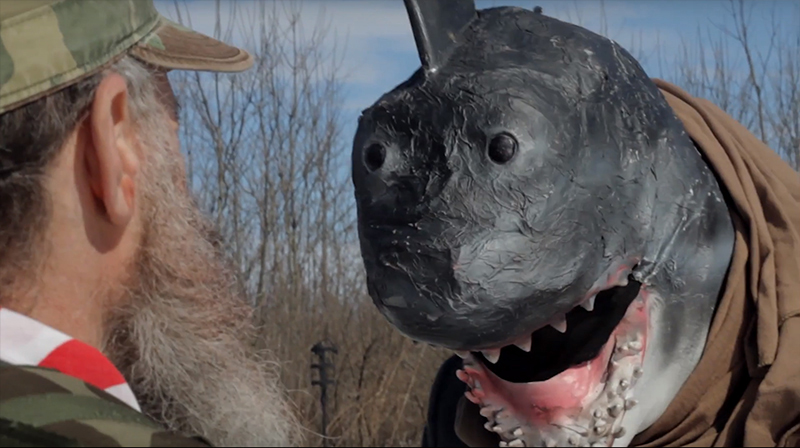 Did I mention there are commando sharks?

The birth of our doe-eyed, buff fish fiends goes like this: two scientists stand in front of a rubber shark toy, giggling maniacally, and one of them plunges a syringe full of mystery jar goo (what’s more clinically scientific than a mason jar?) into said tiny apex predator, which quickly transforms into a fully-clothed fish monster fella with a paper mâchéd shark head and the daftest-looking eyes. Lifeless eyes, black eyes, like a doll’s eyes. They’re sort of lovable, really.

So, who has survived this nuclear Hell? What intrepid stalwarts will brave the battle against the Reds, with their gilled, bipedal superhuman sharkman comrades? Almost exclusively, seemingly infinite squadrons of men with varying degrees of portliness and/or beard patchiness, as we find out. Though inanely goofy and wearing its low budget on its camouflaged sleeve, Post Apocalyptic Commando Shark has somewhat grand intentions in scale, most of which unfortunately works against it.

Its almost constantly rotating cast of characters serve to be a bit confusing in the first third or so, as resistance members are introduced via narration (and later, onscreen text, complete with mini bios) just to be murdered almost immediately. An old man you’d swear took a break from shooting Duck Dynasty to fight the good fight triumphantly mows down soviets and gets his salt and pepper beard additionally seasoned with his own arterial spray mere seconds later.

Another militia sees a cuddly, corpulent fella named ‘Meatball’ end up with his entrails turned to extrails. He eventually duct tapes his exposed guts back on and stumbles around with them for the rest of the runtime.

Scream queen Debbie Rochon shows up, wears an army helmet, gets bored, and blows up. 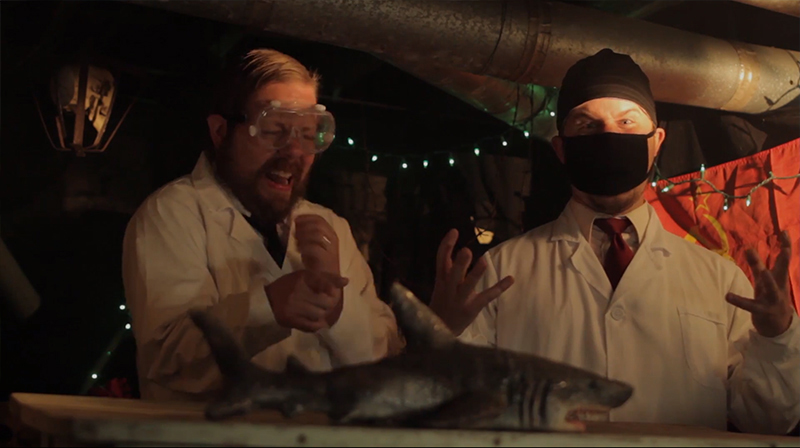 If any of this sounds exciting…well, I’m sorry to have misled you.

These shark-based war crimes usually entail a couple of quick shootings or neck-bites, none of which are particularly entertainingly executed. Even a woman decapitated by a frisbee is not as gloriously splattery a kill as it should be.

Marty is more or less just a device to get us from point A to point B though, as we meet more characters along the way, and they are often killed by commando sharks. The ones that don’t, and actually serve the plot, you might wish had. A scientist (‘Dermot Jackson Washington’) has created the worst man-made monster of all: a cinematic talking dog. I won’t spoil why a shrink ray is needed at the end, but he provides one at the last minute, after spending much of his part’s (and our) time with canine and hobo-related hijinx that made me feel like I was watching a TeenNick show in a meth lab.

There is the leader of the invading Russians who is revealed to have a heart of gold once he finds out the commando sharks are killing civilians. Ya see, Germans scientists were hired to create these Sharkmandos (™️), and it was our aforementioned giggling doctor’s plot all along to turn the sharks on them all…and take over the vorld. 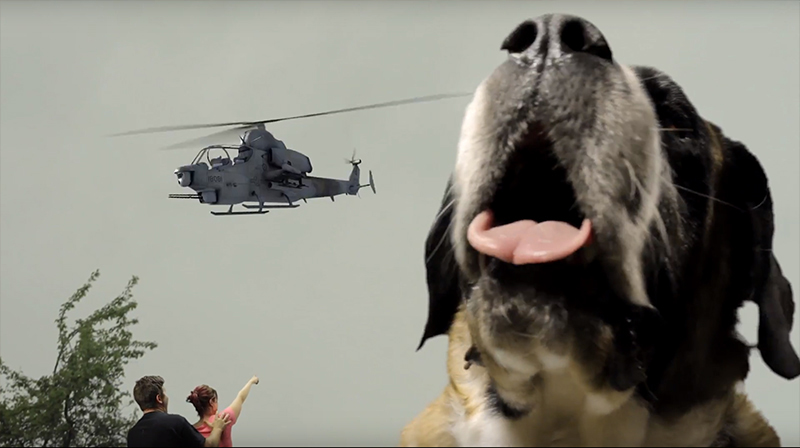 Listen, if you have a taste for movies all the way from b-z, you’ve seen this kind of flick before.

That’s particularly true after digital filming made it much more convenient to gather some friends and family and turn their basements into endless scientist’s labs and strangely wood-paneled top secret bases.

It belongs in that particular breed of low budget comedy that plays off of the absurdity often genuinely present in the b-movie/cult/grindhouse genres, as opposed to, say, being a relatively straight mutant monster flick that becomes comedic in its earnestness (such as creature features of the 50s and 60s that this seems at least partially inspired by) — or even a SyFy movie of the week that winks at you every few minutes. 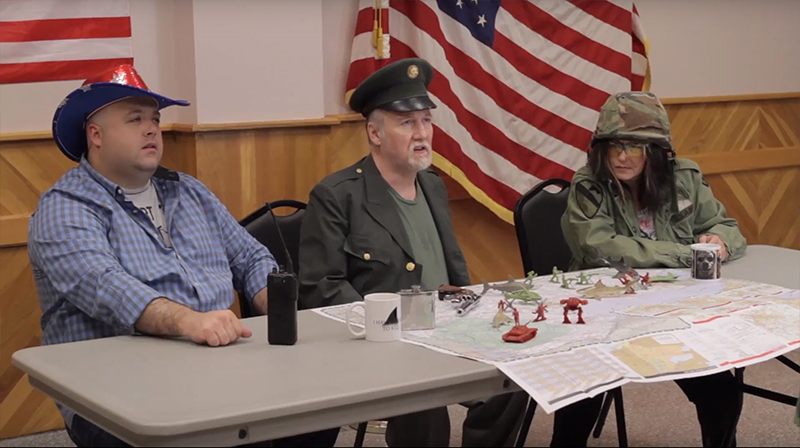 Post Apocalyptic Commando Shark isn’t just in on the joke, it is the joke.

Your tolerance for that kind of thing (and how funny you actually find the joke) will largely gauge your enjoyment of this movie. For what it’s worth, ‘chum’ is already used as a pun a total of three times at just over the half hour mark. There is a veritable sea of wonky accents that sometimes switch mid-line delivery. I repeat, there is a silly-ass talking dog. Swim with caution, folks.

Lest the ‘Walmart on July 5th half-off sale’ sheer vastness of American flags or the choice of Soviets as baddies make you think there is an attempt at satire on excessive American pride or modern politics at play here, there is not (at one point, the president, looking like an ex-wrestler getting ready to shoot a used car commercial, quotes Trump’s ‘fire and fury like the world has never seen’ line and is then promptly killed by a shark with a visitor pass, so there’s that).

The flags, the Russians, and everything else is just window dressing for general, mostly good-natured silliness.

This isn’t necessarily a bad thing. I just wish it had some bite, whether it came from some scattered gonzo gore, a wittier script, or both.

I wouldn’t even trade in the shark heads. Silly as it all is, a smaller scope and some sharper characterization would have helped immensely.

Ultimately it’s much like the young filmmaker of yesteryear having fun and shooting cowboys and Indians on super 8. But here we have the militias versus the Soviets, and you can tell them apart because the latter look like they raided the trench section at the Burlington Coat Factory and wear ushankas. 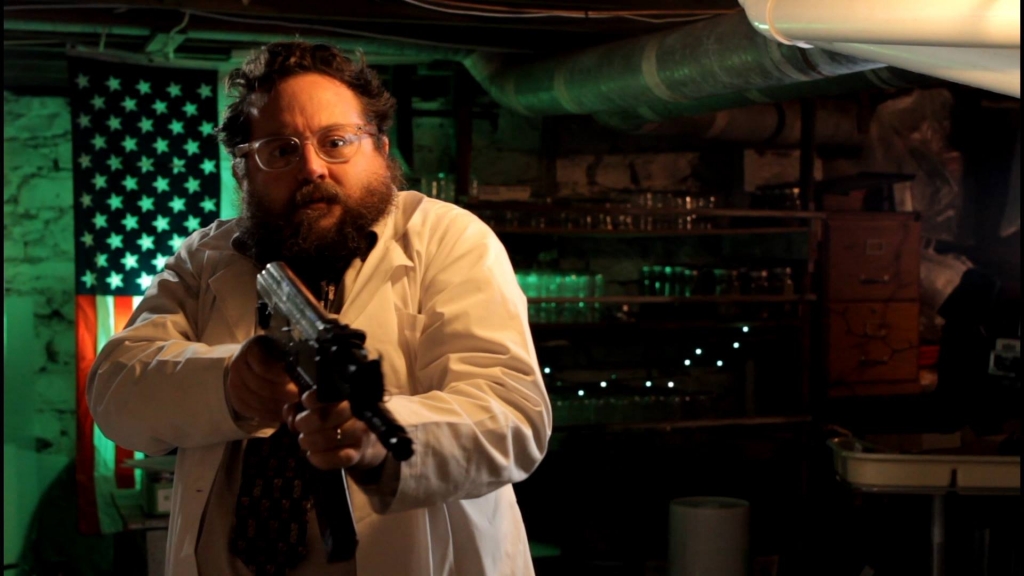 All that being said, Post Apocalyptic Commando Shark is not without its charms.

Being that everyone and their literal mother make up this cast, performances vary wildly. But those who are just having fun with it can be infectious — the director himself (Sam Qualiana) serves up an entertaining part as Siegfried Schröder, the evil German scientist (is there any other kind?) who masterminded the commando sharks. He wears a surgical mask the entire time and hams it up with some commendable brow acting.

A scene at a hipster’s backyard barbecue that ends in mayhem was a highlight for me and had some moments where I felt the slightest slimy touch of classic Troma films. And the post ending sequence hints at a follow-up with a threat so goddamn silly I had to laugh. For the record, I’d subject myself to that hypothetical sequel.

Just bring back Meatball, and give him a beefier role. And for the sake of God and country, hatch up some better puns.

This review is from the 2019 Horror on Sea Film Festival screening. Post Apocalyptic Commando Shark is available to watch now on Amazon.