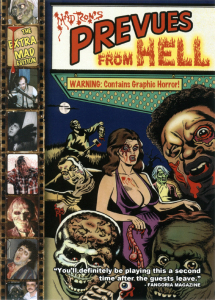 Mad Ron’s Prevues From Hell (1987) is a gloriously nostalgic and loving tribute to the art of the film trailer. It’s a 90-minute smorgasbord of the most outrageous exploitation film trailers from the ‘60s and ‘70s grindhouse era, interspersed with some adorably cheesy shot-on-video segments featuring nerdy ventriloquist Nick Pawlow and his foul-mouthed zombie dummy Happy Goldsplatt.

Watching a film composed of nothing more than old horror movie trailers may not sound like everyone’s cup of tea. But I was surprised by how thoroughly entertaining and diverse the collection was. It’s easy to forget how insane, over-the-top, ridiculous, and no holds barred trailers used to be. Each one seemed crazier and more perfectly twisted than the last.

This film is noteworthy for its shear breadth alone. Several of the films will be familiar to most horror fans, as some have become cultural touchstones (Texas Chainsaw Massacre, Deep Red, Last House on the Left, Night of the Living Dead, Black Christmas). However, these cult classics are buried in a pile of delightfully lowbrow and relatively unknown exploitation films. In fact, I was shocked at just how many of the films on display were new to me.

This film basically serves as a “to do” list for eager explorers of exploitation, and my new mission is to hunt down and watch all 47 of the previewed films in the collection as soon as possible.

Besides introducing audiences to a treasure trove of obscure and forgotten cult films, the trailers themselves offer fascinating insight into the dramatic evolution of the art of film trailers and the ways in which shock, sex, and sadism were marketing in the heyday of horror exploitation and the era of mom and pop video stores.

The film includes a mix of actual theatrical trailers, including many “Red Band” selections (which means that anything goes) as well as shorter television spots. And the trailers were as diverse as the films themselves. Some presented dire warnings urging the “sensitive” to stay away, as well as strategies to help the brave survive the terror (“Keep telling yourself it’s only a movie, it’s only a movie.”). Others introduced insane gimmicks like a bell chiming right before extremely graphic or disturbing scenes or offering free lifetime membership in the insane asylum should viewing the film drive you completely mad.

Still others just fully embraced, with gleeful abandon, the sick and twisted nature of their films and reveled in the uncensored display of gore, carnage, and nudity. Remarkably, some were even quite poetic by today’s standards, with whispered narration and artful prose.

I discovered this gem of a film, quite by accident, while perusing Netflix for something new and interesting. After a little research following my viewing, I learned that there is (remarkably) a sequel to this insane awesomeness. Celluloid Bloodbath: More Prevues From Hell is the 2012 sequel to the film, released 25 years after the original. Although I haven’t yet seen this one, it contains 61 over-the-top horror movie previews from the golden Grindhouse age, spanning the 1960s through the 1980s. It also features commentary from filmmakers, actors, critics and fans. The sequel is not on Netflix, but both films are available to purchase inexpensively through Amazon.

For the curious, below is the complete list of films previewed. Stop reading if you want to be surprised because, in all honesty, a great deal of the fun comes from not knowing what you’re going to see next. Almost all of these films have since made their way to a DVD release. If you’re a fan of obscure cult horror and unapologetic exploitation, you may want to look at adding some of these amazing movies to your collection.

ALL 47 TRAILERS INCLUDED IN THIS FILM:

I Drink Your Blood / I Eat Your Skin
The Texas Chain Saw Massacre
Deranged
Three on a Meathook
The Corpse Grinders
The Undertaker and His Pals
Love Me Deadly
Children Shouldn’t Play With Dead Things
The Maniacs Are Loose(aka The Thrill Killers)
Cannibal Girls
Torso
The Blood Spattered Bride / I Dismember Mama
The Ghastly Ones
The Wizard of Gore
Beyond the Door
Deep Red
Sisters
The Devil’s Nightmare
The House of Exorcism (aka Lisa and the Devil)
Lady Frankenstein
Flesh Feast
Tales From the Crypt
The Vault of Horror
Horror of the Zombies (aka The Ghost Galleon)
Bloodeaters
Revenge of the Living Dead / Curse of the Living Dead / Fangs of the Living Dead
The Diabolical Dr. Z
Africa Blood and Guts (aka Africa Addio)
Night of Bloody Horror
Silent Night, Evil Night (aka Black Christmas)
The Mutations (aka The Freakmaker)
The House That Screamed
Blood and Lace
Two Thousand Maniacs
Night of the Living Dead
God Told Me To
Horror on Snape Island (aka Tower of Evil)
Wildcat Women (aka Black Lolita)
Ilsa, She-Wolf of the SS
Man From Deep River
The Last House on the Left
Carnage (aka Twitch of the Death Nerve)
Color Me Blood Red
Mad Doctor of Blood Island
Silent Night, Bloody Night
Bloody Pit of Horror
Night of the Bloody Apes