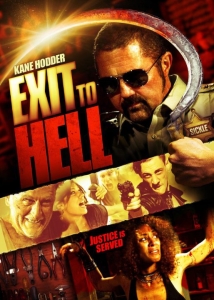 I don’t know where I was or how I missed it upon original release, but I recently stumbled upon a film called Exit to Hell (2013) while searching for horror on Netflix. The film stars none other than the legendary Kane Hodder. And, honestly, besides the brief blurb on Netflix, I knew nothing else about this movie going into it.

Like any good horror fan, Hodder’s presence alone is enough to sell me on a film, and his performance in this movie does not fail to disappoint. When I see a horror icon of Kane’s status receive top billing on an independent horror film, I expect little. More often than not, these big name stars make all too brief and inconsequential appearances, and savvy filmmakers use the star status to sell tickets.

However, in Exit to Hell, Kane is a key player in the film. It’s a meaty and fun role with Kane doing what he does best, playing a psychopathic killer. This time he gets to deliver dialogue as well and really ham it up in a film that is so delightfully over-the-top that words fail to properly describe it. Tiffany Shepis and Rena Riffel star alongside Hodder in this bloody and gory tribute to American Grindhouse cinema.

Without giving too much away, here’s a brief synopsis of the film. A group of professional thieves get jobs at a mafia-run strip club in order to coordinate a massive heist from the inside. The friends then hop in the car to escape the robbery-turned-bloodbath and head for the border. When they enter the sleepy little town of Redstone, they fall into the hands of Sheriff Slade Sickle (Hodder), a man with a true appetite for justice. Because this is a horror film, you can probably imagine what type of grizzly fate awaits the young criminals.

Exit to Hell was written and directed by Robert Conway, who also produced the film in conjunction with Funhouse Features (David Friedman, Justin Anderson, and Executive Producer Anthony Cassanova). I did a little research, and it appears the film was originally titled Sickle, named after Hodder’s titular role. After spending a great deal of time in limbo, the film was eventually picked up by Uncork’d Entertainment and distributed via VOD/digital in November 2013, followed up by a 2014 DVD release.

The film begins in a rather odd but interesting way. For a moment, I wasn’t sure I was watching the right movie. The cold opening thrusts the viewer into a film within a film, using footage from a 10-minute short made by the director in 2010 called Necro Wars. The short actually bookends the movie and is shown in various times throughout the film with characters watching it on television.

After the unusual introduction, we get a gory opening sequence with two drug dealers on the run, after murdering another group of dealers. The pair stumble into Redstone, try to hold up a gas station, and discover the hard way that the sheriff in this town likes to take the law into his own hands. From there we get some highly stylized and creative credits that really helps emphasize the film’s grindhouse-inspired aesthetic.

Exit to Hell is very clearly and unapologetically inspired by a variety of films and filmmakers—paying homage to the work of filmmakers like Rob Zombie (The Devil’s Rejects, House of 1000 Corpses) and Quentin Tarantino and Robert Rodriguez (Grindhouse, 2007), as well as films like Texas Chainsaw Massacre.

At just 81 minutes, the movie clips along at a solid pace and keeps the gory action plentiful. It starts off with a bang and never really slows down. Backed by impressive visuals and a driving soundtrack, this is a dark and gritty film that keeps you on the edge of your seat. It’s everything a grindhouse movie should be, striking the perfect balance between intentionally cheap-looking effects and strong, three-dimensional characters (brought to life through the outstanding performances of the lead actors).

At about the midpoint of the film, there’s a distinct change in tone that may throw some viewers off. We switch gears from the frenetically paced “Tarantino-esque” style to one of more traditional storytelling. This enables us to focus more on the increasingly ominous plight of the core characters. And, while the pace slows some, Conway ups the ante in terms of carnage and gore.

While online reviews suggest this to be a polarizing film, I find it very easy to recommend. For me, this was a highly enjoyable thrill-ride from beginning to end. With a movie like this, you do have to know what you’re getting yourself into to fully appreciate it. But fans of the grindhouse aesthetic and connoisseurs of gore should not be disappointed. I loved this one.