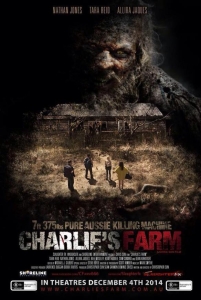 Charlie’s Farm is a 2014 Australian horror slasher film written and directed by Chris Sun (Daddy’s Little Girl) for Slaughter FX. The film was released in December 2014 in Australia and in the USA on March 1, 2015. It stars, inexplicably, Tara Reid (Sharknado) as the lead actress, as well as Nathan Jones (Mad Max: Fury Road) as the titular killer. The film also features two horror heavyweights, the great Bill Moseley and Kane Hodder.

Charlie’s Farm is about a group of friends in search of a weekend adventure. Two of the friends, Jason (Dean Kirkright) and Mick (Sam Coward), hatch a scheme to check out Charlie’s Farm, an old abandoned home rumored to have housed a couple of serial killers and their mentally impaired son Charlie. Legend says that the couple brutally murdered several people before being killed by the locals. The boys drag along their unsuspecting lady friends, Natasha (Tara Reid) and Melanie (Allira Jacques), intentionally omitting details of the macabre nature of their trip.

The history of Charlie’s Farm is shown through a series of flashbacks, as Mick prepares his friends for their adventure by finally sharing the details of the horrific events that previously took place there. We’re introduced to the Wilson family, including Charlie’s degenerate father John Wilson, played by genre veteran Bill Moseley. As usual, Moseley is perfectly suited for the role, chewing scenery with brilliant ferocity and adding much needed depth to the important backstory.

I’m also a huge fan of Kane Hodder, but he seemed underutilized in this film, perhaps merely included for his significant name recognition and iconic status (not that I’m complaining). He’s not given much to do here, and his character seems to appear out of nowhere with virtually no backstory or meaningful connection to the other characters. But Kane makes the most of it, and we do get a nice confrontation between him and adult Charlie towards the end of the film. While the scene itself is not especially compelling, the enjoyment of it is amplified by the mere presence of Hodder and, for slasher fans, the unmistakable feeling that you’re being treated to a “Jason vs Charlie” showdown.

If I have one real critique of the film, it’s that it takes a little too long to get to the action. There’s a strong opening scene that does a great job setting the stage for what’s ahead. In addition, the backstory scenes are quite well done, and both Moseley and Trudi Ross (playing Charlie’s mother) deliver outstanding performances. However, much of the rest of the first hour feels like filler. There was little in the way of suspense, horror, or character development leading up to the bloody mayhem in the third act (when adult Charlie finally appears).

With that said, once things get going late in the film, it’s everything a great slasher film should be. First, there’s the terrifying 7 foot machine of a killer, played by the hulking ex-wrestler Nathan Jones. Armed with a machete, he towers over the rest of the characters, including Kane Hodder (already a formidable presence). In a nod to the great slasher villains like Jason himself, Charlie is essentially mute and truly menacing.

Once Charlie arrives, he’s a killing machine. Gore fans will be relieved to see such a strong payoff for the slow build leading up the finale. The film delivers plenty of gruesome, grisly, and creative deaths. The camera never shies away from showing us the impact of the kills in all their brutal glory. There are some great slow motion shots designed to emphasize the brutality. The kills are incredibly fun to watch and well executed, and there is at least one scene (possibly more) in this movie that is sure to make any slasher film’s “Top Kills” list.

This is a low budget slasher, but the production values are extremely high. The cinematography looks great. The scenes are well lit, making it easy to fully enjoy the splendor of the brutal kills and killer practical effects. And the highest praise goes to the effects, which were every bit as gruesome and realistic as any horror fan could hope for. In fact, besides being a talented writer and director, Sun also runs his own effects company called Slaughter FX, the team behind the outstanding effects for Charlie’s Farm.

Charlie’s Farm is clearly a loving tribute to the great slasher films of the 70s and 80s. It’s riddled with familiar horror tropes. There’s a campfire scene, stories of a spooky urban legend shared among friends, pretty and fairly disposable characters, ominous warnings from the locals that are blatantly ignored, the final girl being the only rational one in the group and repeatedly urging her friends, “I have a bad feeling about this,” and so much more.

Because this is a typical slasher fare, you can expect a few things here. First, the characters are fairly one-dimensional, the plot is threadbare, plot holes abound, and the acting and dialogue is rough at times. However, as with most slashers, none of that really matters. You’re here for the gore and the kills, and in that capacity you should not be disappointed. This is definitely worth a watch for fans of this subgenre.