We honor the birthdays of three of horror’s most iconic actors with a look at five memorable times two or more of these greats shared the screen together. 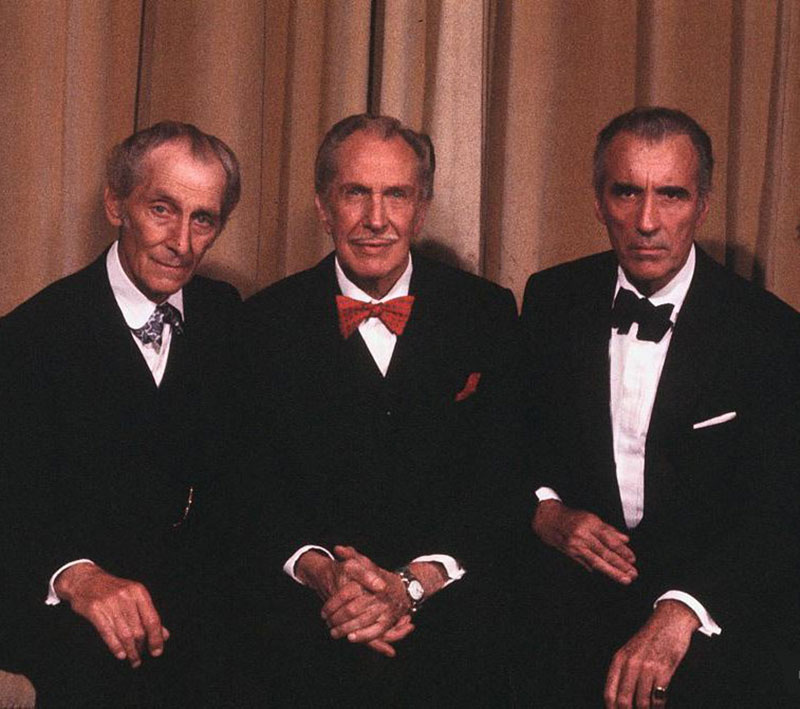 I’m not a big believer in destiny, but there truly must be some kind of cosmic force responsible for the fact that two of the most iconic actors in the history of horror share a birthday — and that a third icon’s birthday is the day before theirs.

The stars aligned so that Vincent Price (b. May 27, 1911), Christopher Lee (b. May 27, 1922), and Peter Cushing (b. May 26, 1913) would not only be contemporaries — starring in some of the best, most successful horror films of the 20th Century — but that they would also become lifelong friends. Between the 1950s and the 1980s, they appeared in over twenty films together in various combinations. However, only two films can boast all three names on their bill.

To celebrate their birthdays, here are five films that feature at least two of these late, great horror icons. 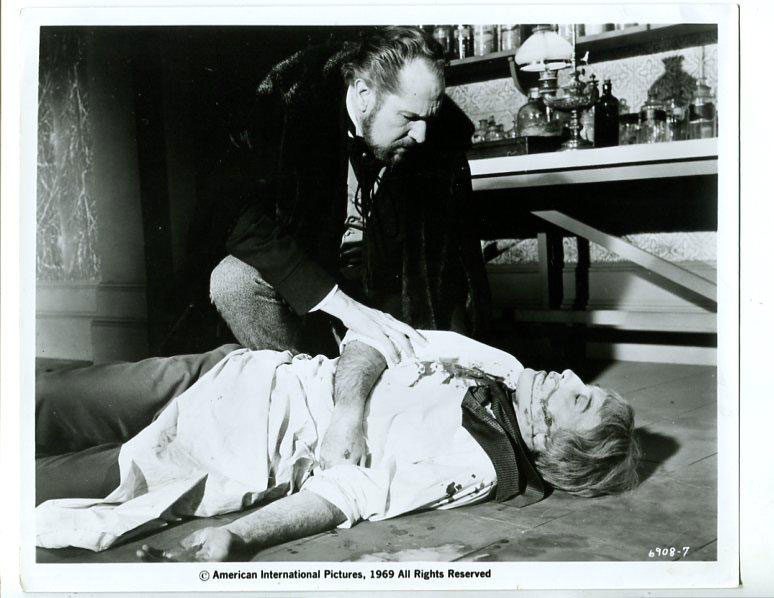 Five years after Roger Corman’s series of Edgar Allan Poe inspired films came to an end, American International Pictures adapted another of the infamous author’s tales: The Oblong Box. They even brought back Vincent Price, and they had the stroke of genius to combine his star power with that of his fellow horror heavyweight, Christoper Lee.

Price plays a wealthy British plantation owner recently returned home from Africa with his brother Edward, who was disfigured by voodoo priests and is now kept locked away in shame. After a convoluted escape plot goes wrong, Edward is buried alive and then dug up by graverobbers supplying cadavers to a local doctor (Lee). Edward goes on a revenge killing spree — and discovers the truth that led to his terrible fate.

The Oblong Box doesn’t live up to the Corman-Poe cycle, but it’s enjoyable in its own right. It’s one of several horror films to sensationalize African voodoo, a nuanced but problematic trope, but the narrative takes a decidedly anti-colonialist stance. The film also marked the first time that Price and Lee would appear on screen together, though, sadly, they only share one very brief scene near the end. For some reason, horror movies set on trains just hit differently. Maybe it’s the fact that there’s no escape; characters are trapped in an enclosed space with a bunch of strangers, any one of whom could be responsible for all the murder and mayhem happening around them. And there is a lot of murder and mayhem on this particular Trans-Siberian Express.

Set in 1906, Christopher Lee plays an anthropologist transporting the frozen remains of what he hopes is the missing link back to Europe for research. He links up with his friendly rival (Peter Cushing), and pretty soon they’re neck deep in, well, murder and mayhem — and Lee’s not-so-dead specimen appears to be the culprit.

There’s some really shady science in this movie. It’s hilarious, but Lee and Cushing are taking everything so seriously that you kind of get swept up in it. Telly Savalas also drops in late in the film as a very dramatic Russian Cossack who hijacks the train. There’s just a lot going on.

Horror Express is one of those few occasions when Lee and Cushing found themselves fighting on the same side, and the chemistry between them is the highlight of the film. There’s also a bittersweet undercurrent; filming began soon after the death of Peter Cushing’s beloved wife Helen, and he was so overwhelmed with grief that he almost dropped out. According to producer Bernard Gordon, Christopher Lee had a heart-to-heart with his old friend and, reminded of the joy they’d shared working together over the years, Cushing decided to stay on. If that doesn’t make your heart grow three sizes, I don’t know what will. 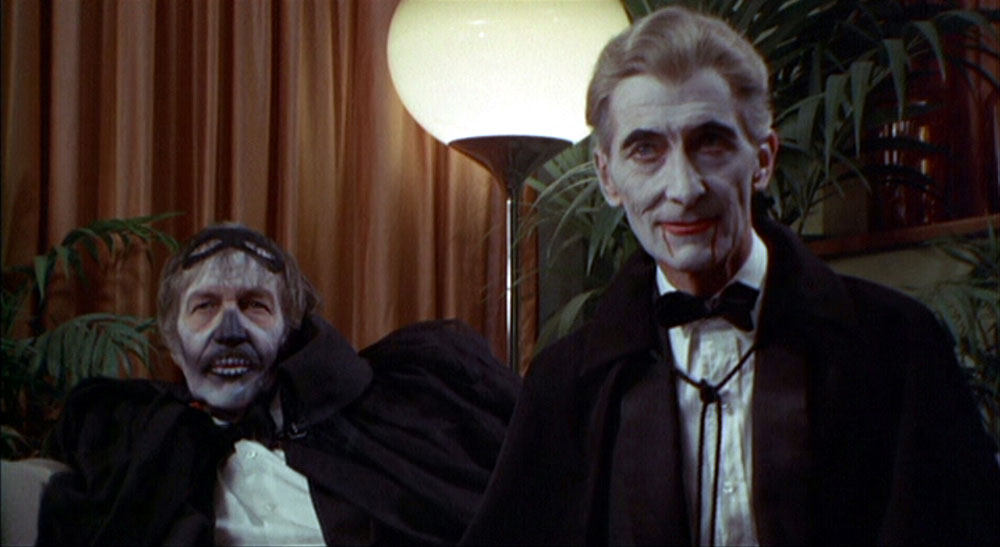 Not counting Peter Cushing’s blink-and-you-miss-it cameo in Dr. Phibes Rises Again, he and Vincent Price only shared the screen one time without Christopher Lee along to round out the triumvirate. Produced by Amicus (a Hammer-adjacent UK production company that frequently borrowed the larger studio’s stars) and American International, Madhouse is a highly meta movie in which Price basically plays a fictionalized version of himself.

Paul Toombes (Price) is an aging former horror film star who suffered a nervous breakdown after the murder of his fiancé, which he may or may not have committed. Years later, Toombes’ close friend (Cushing) convinces him to revive the character that made him famous, Dr. Death, for a new television show. But the murders soon start again, each one inspired by one of Dr. Death’s kills, and all signs point to Toombes, who is no longer sure where he ends and Dr. Death begins.

AIP cofounder Samuel Z. Arkoff considered Madhouse the end of the studio’s horror cycle, after it failed to live up to the success of previous efforts. Maybe audiences had simply moved on to a different kind of horror. Times were changing; Madhouse was released the same year as The Texas Chainsaw Massacre, and there could not be two films contained in the same genre more different from each other.

Still, Madhouse is a fun movie that recalls the glory of AIP’s earlier films. Scenes from Vincent Price’s roles in the Corman-Poe cycle are used for Paul Toombes’ fictional filmography — perhaps both actors were longing for a return to their heyday. 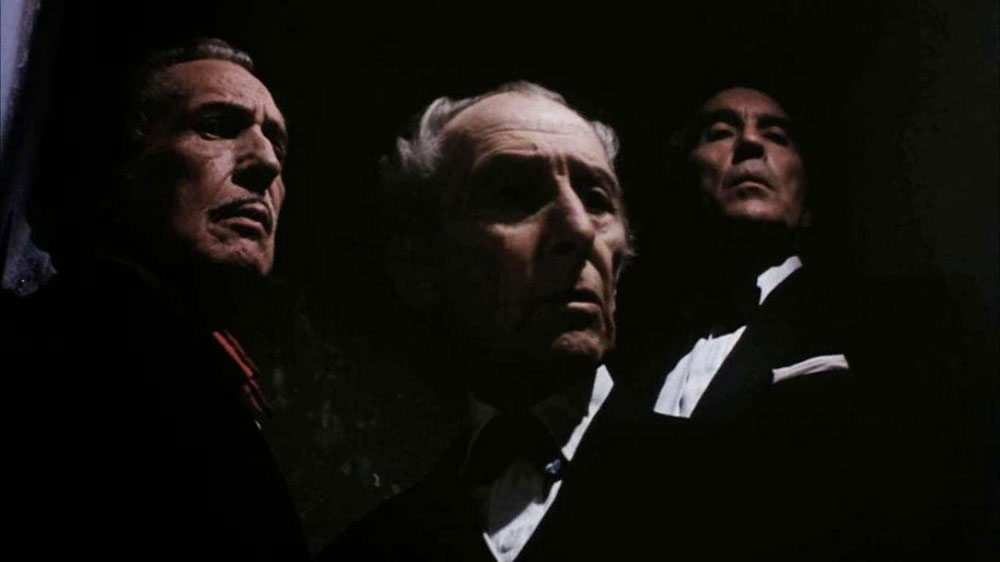 The only film more meta than Madhouse is House of the Long Shadows. This horror comedy is the second and last time that Price, Lee, and Cushing would all three appear in the same film (the first is 1970’s Scream and Scream Again, which, to put it mildly, is a hot mess).

A young writer (Desi Arnaz Jr.) takes up a bet with his publisher to spend the night in an abandoned Welsh manor and churn out the next great Gothic novel in 24 hours. He soon finds that the manor isn’t as abandoned as he’d been led to believe and that he’s imposing on a long overdue family reunion. The elderly Lord Grisbane (John Carradine, who many seem to forget was a heavyweight of the genre in his own right), his daughter Victoria (60s British television star Sheila Keith), and sons Lionel (Price) and Sebastian (Cushing) have reunited after 40 years to atone for a terrible family secret. Lee soon crashes the party as a real estate mogul who is buying the property and plans to have the manor torn down.

I can’t understand why this film is largely forgotten; I guess it, like Madhouse, just wasn’t the kind of movie horror audiences wanted at the time. But it’s such a delight. Everybody is having a grand time poking fun at themselves, their legacies, and the kind of movies that made them famous. I don’t want to spoil the twist ending, but at one point Price very cattily calls Lee a bitch, and it really is the best thing ever. Appearing in nearly twenty films together over the span of their careers, Christopher Lee and Peter Cushing were to Hammer Film Productions what Karloff and Lugosi were to Universal. Their first contribution to “Hammer Horror” was 1957’s The Curse of Frankenstein, but their best work came a year later, when Lee took on the role he would spend the rest of his life trying to escape.

Vampire hunter Jonathan Harker arrives at Dracula’s castle to slay the centuries-old count. Naturally, that doesn’t work out for him, and his buddy and fellow slayer, Van Helsing (Cushing), comes looking for him. Soon Van Helsing and Dracula are embroiled in a deadly cat-and-mouse game, dancing around each other until they finally come face to face in one of the most dramatic showdowns in horror history.

Horror of Dracula spawned Hammer’s best known franchise with a whopping eight sequels. And though they only appeared together in three of the nine films, Lee’s Dracula and Cushing’s Van Helsing became one of the most iconic duos in horror history.