An intense and brutal thriller, “Artik” offers a surprising theme within its dark story and ferocious performances from Angelo and Carter.

In a movie landscape crowded with bloated and loud spectacle, a gritty collision course between two regular people taking place in the vast blandness of hidden middle America seems unlikely to have much in common with the superhero genre. Yet Artik manages to carve out a place for itself within the ongoing war between heroes and villains.

The darkness of Artik is apparent within the opening scenes where we discover a man consumed with finding “something pure” by capturing people and seeing how long it takes for them to break before he kills them. The man’s name is Artik. He has a wife, a handful of sons, and is a serial killer. But he’s not just any serial killer, he’s a villain in search of a hero, a worthy foe.

Artik is played with menacing stillness by Jerry G. Angelo.

He talks like a twisted prophet with a slow and wise sounding delivery. It’s the perfect portrayal of an unhinged person who has the ability to charm others with a gentle demeanor despite a hulkish frame. But when Artik takes his victims to his “magic workshop” where his “research is done,” Angelo turns merciless in an instant.

His workshop is a darkly lit garage with more shadows than light, a place where evil is winning the battle over good. It’s adorned with dirty browns and grays and lit with harsh fluorescent blues and hot orange glows, giving it the impression of a cold, industrial, filthy hell.

Lauren Ashley Carter plays his wife, Flin, with a nonchalant confidence which makes her character all the more terrifying.

To Flin, what her and Artik do is normal, good even. And that’s a scary world to be in. At once a housewife doing the dishes and displaying a sweet disposition, Carter switches gears in an instant becoming a cornered animal. She’s ferocious, and her performance is gritty with teeth.

The hero that Artik accidentally finds because his son, Boy Adam, befriends him is Holton.

Chase Williamson plays Holton with a relaxed, shoot-the-shit demeanor that an unassuming hero would possess.

Holton wanders through each day wholly oblivious to his natural calling, a role that seems as distant as the experiences he’ll never have in his friendless and lonely life. He says he attracts toxic situations and seems to be always “chasing chaos.”

Holton is an unknown hero. His straight-edge lifestyle and efforts to avoid the fates of his junkie parents have him unaware of the path laid out for him. 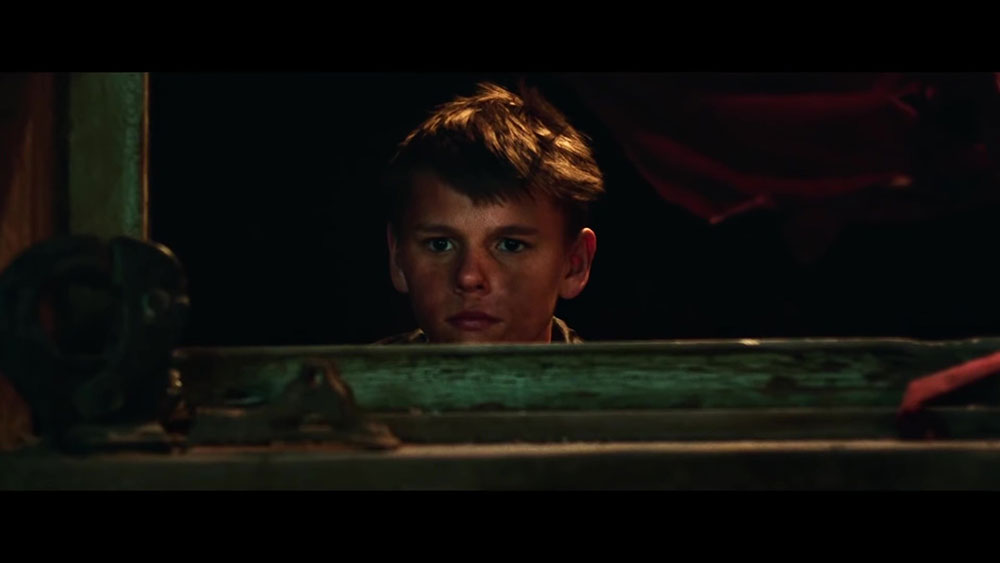 The relationship between Boy Adam and Holton also challenges family dynamics by demonstrating free will to question the teachings of your own family.

Calling someone your father doesn’t necessarily mean they want what’s best for you and doesn’t mean what they say is always right. You can’t choose your parents, but you can choose your family. In this way, Boy Adam brings meaning to Holton by needing a hero. This meaning is what scares Holton the most, as he’s avoided it his whole life.

“Whatever it is that scares you the most is coming for you,” says Artik to Holton. And he’s exactly right.

The score in Artik really connects the images in an interesting and meaningful way. It sounds like rats scrambling on an old creaky ship and turns the characters into passengers. This world is a miserable, dirty place, and these people are passengers on the creaky ship they live on — passengers with a purpose of their own making, some known and some unknown.

The score is the sound of hunting, of running, of hiding, of trying to survive.

The set up and journey of Artik is more interesting and successful than the ending, which feels a bit rushed and anti-climactic. But this ending does not detract from the intense and brutal thriller that Artik ultimately is.

The practical effects are wickedly good, and the killings are gory on a savage level. It’s a film with a relentless pursuit of its own truth. And while it may fall just short of that lofty ambition, Artik is well worth checking out as a frightening and dark mystery. And the most unlikely of superhero movies.

Artik will have a limited theatrical release beginning today, September 6th, followed by a Blu-ray and VOD release on September 10th from Epic Pictures and DREAD.