Bad Frank is a gripping and emotional revenge thriller from first-time director Tony Germinario, a promising new talent you’ll want to keep your eye on 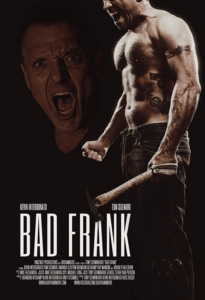 A tiger may not be able to change its stripes, but surely a person can change his/her nature, right? Just think of the age-old tale of Ebeneezer Scrooge and how in the course of one harrowing night he saw the error of his ways and transformed from a miserly curmudgeon into a benevolent philanthropist. People change religions, politicians change their party affiliations, scientists adopt new theories. In short, we have seen many examples of both fictional and factual personal transformations.

So then, Bad Frank, the title of director Tony Germinario’s directorial debut, would lead one to believe that the protagonist, Frank Pierce, portrayed by Kevin Interdonato, would be a rotten-to-the-core scoundrel without any redeemable qualities. The title predisposes the viewer to be biased against Frank, scrutinizing his every action and word for signs of this aforementioned “badness”.

However, one finds Frank to be a very sympathetic character; a man who obviously has something weighing on him as he struggles to get through his day. Despite his inner conflict, his external world appears stable and secure, with a nice suburban house and a beautiful, loving wife.

Frank cuts an imposing figure; thick and muscular, his body communicates power and the potential of violence, but this is offset by his sensitive personality and genial nature. The viewer is both endeared to Frank, and yet, a bit unsure and unnerved by him as he steps tentatively through his day, like a barefoot man walking through a room full of broken glass.

One point of external conflict we find in Frank’s life is in his strained relationship with his parents. His mother won’t return his phone calls and his father, a former police sergeant portrayed by former boxing champion-turned-actor Ray “Boom Boom” Mancini, seems to be not just disappointed in his son, but outwardly hostile.

In a painfully awkward encounter, Frank seeks out his father in a local bar and attempts to engage in conversation with him, but it is a stilted and one-sided affair, with Frank nervously making small talk, while his father keeps his eyes trained on the baseball game on the television, not even bothering to look at his son sitting on the stool next to him. Frank reveals that it’s been five years since he last saw his father, to which his father replies “five quiet years.” Frank tries to assure his father that “things are different”, to which his father spits out, “I don’t know you—your mom either, so what is there to talk about?” This tense scene makes us wonder what Frank did in the past to so fracture their relationship.

Another issue Frank encounters involves his friend Travis (Brandon Heitkamp), a shady slip of a man who asks Frank for “help”. We’re not quite sure what kind of help he is requesting, but Frank reluctantly agrees, stating that this will be the “last time”. This ratchets up the tension as we anticipate something potentially ominous looming on the horizon. Later that night, Frank meets his wife and Travis at a bar. Frank is a recovering alcoholic, and the camera keys in on the drinks and then back to Frank’s twisted and sweaty face, effectively portraying how difficult it is for Frank to be in this setting.

It’s not long after that Frank, along with Travis, travel together to an isolated parking lot to meet with some unsavory figures. It is evident, then, that the “help” Frank is there to provide is to be a “heavy”; someone who can, with his mere presence, dissuade someone from acting too rashly in a tense situation. Two men pull up in a Porsche and it is then that we learn that one man, Mickey, portrayed by Tom Sizemore, is a former “friend” and employer of Frank.

Mickey and his associate, Niko (Russ Russo), are drug dealers, and this revelation gives us a clearer picture of the kind of man Frank once was years ago. Mickey superficially waxes nostalgic with Frank and says, “Isn’t it something what a couple of years can do—things change!” Yes, Frank has changed in the intervening years since he ended his employment with Mickey, but once two more drug dealers show up and are murdered by Mickey and Niko, Frank is unwittingly pulled right back into the dark world he thought he had left behind. Still, Frank, struggling to reconcile his past “bad” self with his present “good” self, decides that he will report the crime to the district attorney. It is this decision that sets into motion a series of events that will test our protagonist and threaten to tear both his soul and his world apart.

I am going to refrain from saying anything more about the plot of Bad Frank, because it’s worth your time to see how the rest of it unfolds. There are twists and revelations that will, at times, have you smiling at the cleverness of the script, and at others, cringing at the increasingly depraved actions of the characters.

Bad Frank is a slick and polished product, from the quality of the print to the sound design, it is an impressive effort by first-time director Tony Germinario.

Of course, every movie is a team effort, and Mike Hechanova deftly handles both the cinematography and the editing. The music by Michael Long, combined with the work of the sound department, effectively adds to the underlying feeling of unease and tension that runs through this film. There are some scenes in particular where the performances of the actors, Germinario’s direction, Hechanova’s editing, and the music and the sound design converge to create magic.

In one memorable sequence, Frank is beside himself with self-doubt and fear as he tries to psyche himself up to confront Mickey on the phone. The scene is so well-shot and masterfully edited, splicing together a series of quick takes, resulting in a montage of near madness, masterfully executed by Kevin Interdonato’s performance.

In another scene, Frank reconnects with his estranged father on the phone, using one of the few things they have left in common—a love of baseball. In a heart-rendering moment, father and son reminisce about a day spent together at a professional baseball game, one in which Frank caught a foul ball, and how much Frank yearns for the connection he and his father once shared on that day. The shots alternate between his father, sitting on the couch watching a baseball game, and Frank, sitting on the edge of his bed, turning that baseball over and over in his hand, barely able to hold back the tears as he expresses his love for his father. The pathos that Interdonato conveys in this scene is just heart rendering.

In many respects, Bad Frank is a “perfect storm”, in which the hard work of all of the production staff and the actors combine to create a tense and entertaining thrill ride that will have you biting your nails in anticipation of what will happen in the next scene.

The standout performances by Kevin Interdonato and Tom Sizemore push all of the right emotional buttons, and they toy with your emotions as you find yourself rooting for and against them at different points in the film. While there is graphic violence, this is not a straight-up horror film, as much as it is a action-adventure revenge thriller, tonally in the same vein as Jeremy Saulnier’s ‘Green Room’. Tony Germinario is definitely a director to keep your eye on and ‘Bad Frank’ is certainly worth your time and serves as a great harbinger for great films to come.

Written by The Black Cat