Reel Review: Blessed Are The Children 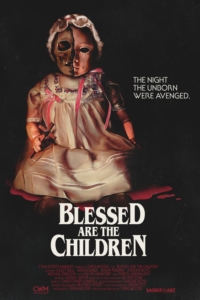 Blessed are the Children  tells the story of Traci Patterson, who  after getting an abortion begins to suspect that something sinister is following her and her friends.

It’s a simple set up that never gets any more complicated than that, but Blessed are the Children isn’t just a simple horror film looking for scares and a body count. I was surprised to find the film is a character driven story centered around the struggles of the main character Traci (Kaley Ball). We get to know Traci over the course of a few days and see she is in a tough spot in her life. She’s feeling a bit lost dealing with the loss of her father and feeling the pain of a recent break up.

As a viewer, I really liked Traci and found Kaley Ball and her performance to be just wonderful. She comes across as both mature and naive and unabashedly dorky. And that is a compliment. She’s real, naturally quirky at times and has a very patient way of delivering her lines.

The likability of Traci — and the innocent, anything goes interactions with her friends Erin and Mandy — sets up the carnage that soon follows in an interesting and unique way. The first half of Blessed are the Children plays out almost like a romantic comedy, with elements of horror mixed in. The overall feeling of the film is a smooth cross between “Sex and the City” and Black Christmas, and this mash up of genres is handled nicely by filmmaker Chris Moore.

When Traci gets an abortion, the film’s tone shifts into full fledged horror mode as she starts to get followed by protesters who were outside of the clinic that she went to for the procedure. The masks the protesters were wearing have a truly unnerving, pouty, man-child look to them — as if they were aborted fetuses stuck in infancy never to grow old. It was a thought out and powerful appearance.

The protesters begin to follow and hunt down Traci and her friends, referring to them as “sin enablers” through vicious phone calls. There’s a voice on the other line that once again recalls the chilling calls from ‘Black Christmas’. The kills are gruesome, the effects are solid, and the blood flies. All the while, a great, 1980s slasher style score plays over the horror. The filmmakers are students of the genre, and that’s on full display in the execution of ‘Blessed are the Children’.

There is one issue I had with the film. To say it outright would be a spoiler, so I’ll have to remain a bit vague. There’s a surprising but very questionable choice made about half way through the film that is unexpected to say the least. This choice actually had me thinking if watching the second half of the movie was even necessary! It’s a unique but questionable structural decision that unfortunately hindered the pacing and tension of the last half of the film.

With that said, and although I didn’t agree with that particular choice, there’s plenty to like about Blessed are the Children and the promise that filmmaker Chris Moore shows in this film. It pays homage without ripping off, boasts solid production value, and is executed with knowledge of the genre. The ending even offers some twists and turns that leaves the viewer guessing and wondering just who are these killers. That definitely makes Blessed are the Children worth checking out!