In an absolutely gorgeous film, director Anthony Scott Burns asks, “What if all your dreams could come true — even the darkest ones?” 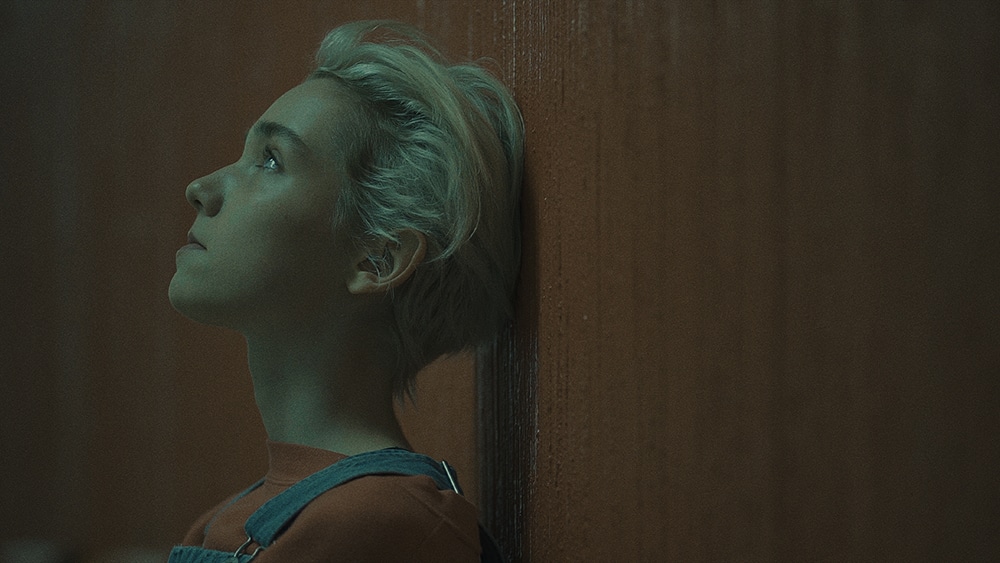 SYNOPSIS
A young woman, who is estranged from her family, suffers from night terrors and sleep paralysis. Having no place to live she finds a post for a sleep clinic where she can get paid to sleep while they hook her up to a device to interpret her nightmares. This study is much more dangerous than she could ever have thought possible. when she is forced to confront her fears face-to-face.

Come True is as beautiful, cerebral, and disjointed as a real dream can be for any of us. Cool-toned and very disturbing at times, this sci-fi horror from director Anthony Scott Burns is also just as frustrating.

We have all experienced that moment when we wake up and our most recent dream is right on the edge of our consciousness. We lay there and stretch our brain to try to understand what we were seeing just a second ago, to attempt to examine the images and relive the dream…but poof it’s gone. That’s how I felt the moment the film was over. That “what just happened?” feeling washed over me, and I wanted more so I could have a movie that makes sense; not one that left me in that dreamlike limbo I get every morning when I wake up.

But having just said that, here is a statement from writer/director Anthony Scott Burns where he explains that is exactly what he wanted to happen.

“I’ve been fascinated with the concept of sleep paralysis since I first experienced it in my youth,” said Burns. “When people are in this state, they often seem to see the exact same thing: dark shadows with eyes watching over them. Science obviously declares this a mass hallucination, but you have to wonder… Why do people see the same thing?”

Inspired by the work of Nicolas Roeg, William Friedkin, Stanley Kubrick, and David Cronenberg, as well as sleep studies conducted by Berkeley University, Come True seeks to ask what would happen if we could see other people’s dreams. What would we see? What would we discover about ourselves? What if these shadows from our collective dreams saw us looking back at them?

“Artistically, the goal of the film was to create a classic genre narrative that could slowly hypnotize” adds Burns, “that would clearly deliver a building ‘feeling’, and finish with a moment for the audience that leaves them disoriented, lost, questioning where the line between the film and their own life ends. A dream come true.”

So, what’s it about?

Sarah, (Julia Sarah Stone) a teenager who seems to be homeless by choice, (she stops at her house when her mother is away to shower and get supplies) needs a place to live. When she sees a notice that offers $12 an hour to sleep, she goes for it. At least she has a place to get a good night’s rest, which is better than what she has been doing, which is sleeping in the park.

The doctors hook her up to a full-body suit that records everything going on in her brain while she is in REM sleep. Later, when she is shown some photos of shadowy creatures from her dreams, she is horrified. Her hellish nightmares are coming to life.

There are a lot of interesting theories presented about dreams here, and the film goes to some terrifying places inside the sleep subjects’ heads.

At first, Sarah has no idea what the doctors are studying, but eventually, she gets the information from another member of the team named Riff (Landon Liboiron), who has a crush on her. Their relationship is strange at best.

The spine-chilling dream sequences in black are in eerie contrast to the neon blues of the rest of the film, so we always know the difference. I found those scenes riveting. nd since I too have recurrent nightmares, they really hit home. The cinematography was wonderful, as was the mesmerizing score, which I was surprised to find out was all done by Burns. He is certainly a jack of all trades in this film.

I’m not quite sure how I feel about Come True.

The concept of seeing into other people’s dreams and being able to interact in them is not totally original, but in this film, it is very well done. Fans of horror who also love films that fall into a sci-fi category will really get behind it. But the real target audience is folks like me who can relate to having nightmares that linger right on the edge of sleep. Horrible, heart-racing stuff, but visions that go away as soon as we wake. Being able to finally see those shadowy dream monsters and confront them would be fantastic and yet utterly horrible at the same time.

Though I enjoyed the film for its hypnotic and chilling visuals, I did have trouble following the logic at times.

That is what made it frustrating, as I said at the beginning.

I loved experiencing the bizarre film, but the ending didn’t give me that ‘Aha’ moment that I love. Don’t get me wrong, it was a crazy finale, but either I missed something, that left me confused, or it’s just like director/writer/musician/cinematographer Anthony Scott Burns said it would be; Come True definitely left me feeling disoriented.

I cannot put this review to bed, without mentioning the exceptionally stand-out performance by Julia Sarah Stone as Sarah. She was incredible! I believed her every second ,and she is an actress that I hope to see a lot of in the future. She made this film essential viewing.

Come True will be available in theaters and on-demand March 12th from IFC Midnight.

All Photos courtesy of IFC Midnight