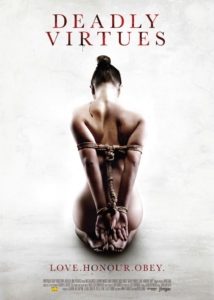 This is no-holds-barred horror and brutality, a character-driven and violent tale of very bad people doing very bad things.

Deadly Virtues stars Matt Barber and Megan Maczko as married couple Tom and Alison, whose sexual escapades in the bedroom are cut short by a soft-spoken and diabolical home intruder (Edward Akrout). As their impersonal and almost disturbing sex is interrupted, violence explodes in the home. The intruder, an expert at tying intricate knots, binds the couple and holds them hostage. Tom is dumped in the bathtub, while Alison is tied up in the kitchen.

What are the intruder’s intentions? Is he a rapist and cold-blooded killer, or does he have other objectives in mind? And why has he targeted Tom and Alison in the first place? With bursts of explosive violence and bloodshed throughout, Deadly Virtues slowly and methodically reveals the answers to these questions.

The film is unapologetically brutal, its graphic violence reminding this reviewer of another outstanding home-invasion film, Alexandre Aja’s ‘High Tension’ (2003). ‘Deadly Virtues’ is nowhere near as violent as Aja’s masterpiece, but de Jong’s intruder has a vicious mean streak, which he never hesitates to unleash on the couple. As secrets emerge and the intruder’s plan becomes more clear, he puts a pair of pliers and a shard of glass to bloody use in scenes that will have most audiences cringing in horror. And like ‘High Tension’, de Jong’s film never lets up; the climax is a wild ride and remains just as relentless and brutal as everything that has come before.

Mark Rogers’ script is mostly tight and spot-on, unmasking a married couple with a deeply disturbing past and conflicts that seem impossible to resolve.

Barber and Maczko bravely handle the material in two roles that must have been difficult to come to terms with once the cameras were shut off. Akrout, as the intruder, is a sinister presence in the film, as taut as piano wire and just as deadly. Despite a few scenes that dragged and a strange piano score that didn’t seem to fit, Deadly Virtues is perfect for anyone looking for a horror movie that takes a familiar formula and infuses it with a voice that is fresh and at times shocking.

With top-notch acting and confident directing, Ate de Jong’s Deadly Virtues will surprise those willing to overlook its few shortcomings. Gritty and intense, the film lingers long after the final frame and even suggests that this intruder’s unflinching style of terror is only just beginning.