Dwelling is a satisfying and atmospheric horror film, which delivers chills through strong story and character development rather than cheap jump scares 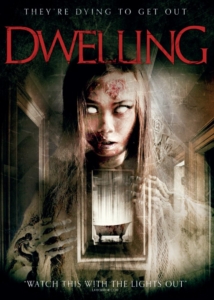 Dwelling tells the story of  a young woman named Ellie (Erin Marie Hogan) who knowingly moves into a haunted house with her daughter and boyfriend. Consumed by an incident from the past involving her sister River (Devanny Pinn), Ellie accidentally releases an evil spirit that dwells inside a black mirror that works as a doorway to the other side.

I love a good haunted house story. There’s something very scary about an unpredictable evil spirit or an item that works as a portal to another dimension.

DWELLING hits the mark in both atmosphere and story to create an entertaining movie. The film takes it’s time setting up the uneasy presence in the house and establishing the relationships between the characters, which creates a bigger payoff at the end. Along the way we are treated to some nightmarish and very creepy imagery. The way the film handles the evil presence that is dwelling in the home is very effective and shown in a way that gives enough to see what it looks like, but leaves enough mystery to let the figure linger in your imagination.

She embodies perfectly a character not only consumed by a past mystery, but haunted by it. It’s become an obsession with her character to a fault, and Hogan’s loving yet somewhat chilly portrayal is spot on for the character. The constant sense of Ellie putting herself in danger makes you feel for her, and Erin Marie Hogan is very likable in this. While she exudes a reckless sadness, I found myself rooting for her.

Mu-Shaka Benson as Gavin is a great compliment to Hogan’s Ellie as her boyfriend. He does an excellent job of portraying a man who is both supportive and scared of the situation that is unfolding in his home. Benson gives a strong performance as Gavin, portraying the conflict he feels between supporting his girlfriend and questioning her actions and the danger they might be putting the family in.

Devanny Pinn makes the most of her screen time and gives a very strong performance as River, Ellie’s institutionalized sister with a troubled past. She channels Brittany Murphy in Don’t Say a Word and is simply captivating. River wants to get better but can’t, and Pinn expertly let’s the viewer know she is truly haunted and trapped by her horrific past.

I’d recommend Dwelling because it doesn’t just throw a bunch of nonsensical jump scares at the viewer.

The film unfolds slowly and adds layers along the way, telling an effective story. It also creates characters we care about that are given life with strong performances from the cast. Kudos to first time feature film director Kyle Mecca for creating a solid film. Check out DWELLING if you get the chance, and get ready for a creepy good time.