While not the most celebrated entry in the series, F13 Part 3 delivers a real sense of fun, creative kills, a menacing Jason, and that iconic hockey mask. 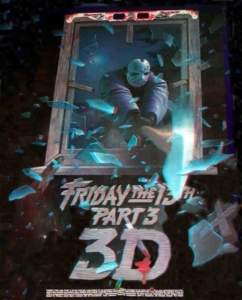 Terror in a New Dimension was the name of the game when Paramount decided to make a 3rd chapter in the Friday the 13th series. 3D was making a slight comeback in the early 80s, and the idea of having Jason literally jumping out of the screen at the audience was a safe bet to get people in the theater.

Steve Miner, director of Friday the 13th Part II, returned for one more cinematic adventure in Crystal Lake (well it was actually Higgins Haven, and it was technically now Monday the 16th) with everyone’s favorite Mama’s Boy. After the script and casting had commenced, filming began on what many thought was the finale of Jason Voorhees…or was it?

The film opens with a quick recap of the events from Friday the 13th Part II and gives us the infamous Disco Friday the 13th theme over the opening credits. Clearly we know that we are in for one fun ride.

Chris Higgins and her friends, which include Debbie, Chili, Chuck, Andy, Vera and the polarizing Shelly (he’s either loved or hated depending on who you talk to…I for one love him) are heading to her family’s cabin near Crystal Lake for a weekend getaway. Along the way they see the police investigating an incident at the general store, which we know is the latest in Jason’s massacre. Just prior to arriving at Higgins Haven, the group meets a mysterious old man that warns them of their impending doom at the hands of Mr. Voorhees.

Rick, Chris’ romantic interest, meets them there as he has been playing the role of caretaker to the house and property. Once everyone gets settled, its time for the time honored Friday the 13th tradition of smoking weed, drinking beers, showing skin, and pulling pranks. 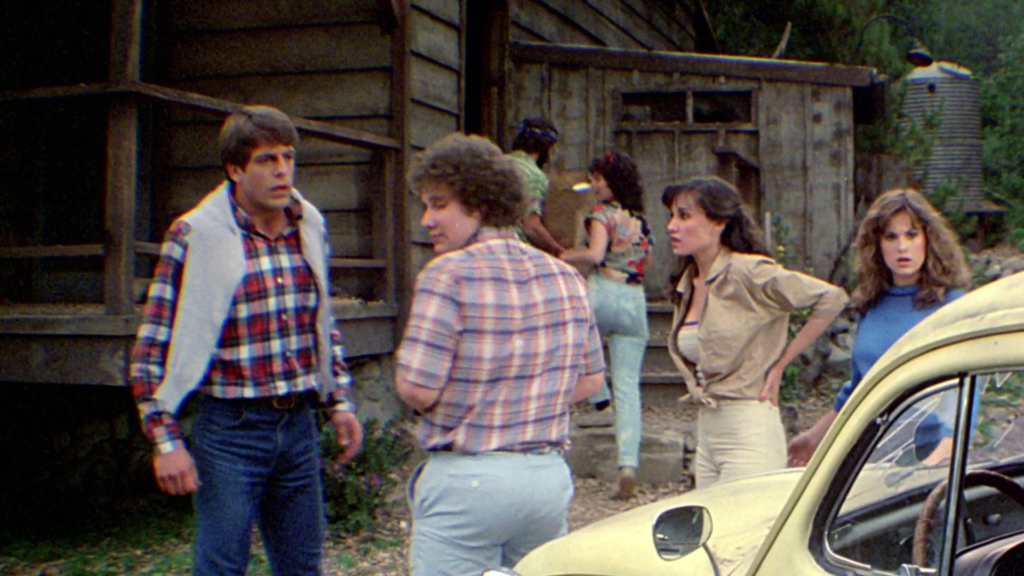 Unbeknownst to anyone, Jason is hiding out in the barn waiting for his moment to head back to his shack. Shelly gets the pranks going by faking his own death with a cleverly placed fake axe to his afro. Shelly has a box of tricks that he’s dubbed “My Whole World”, however one item in particular will go on to change the series forever.

After Chris and the group begin to come down from the prank, Shelly and Vera go for a ride into town for more munchies and beer. While at the store, they run afoul of the local biker gang consisting of Ali, Fox and Loco. Things really get bad when Shelly runs over their bikes after Ali smashes in their window. 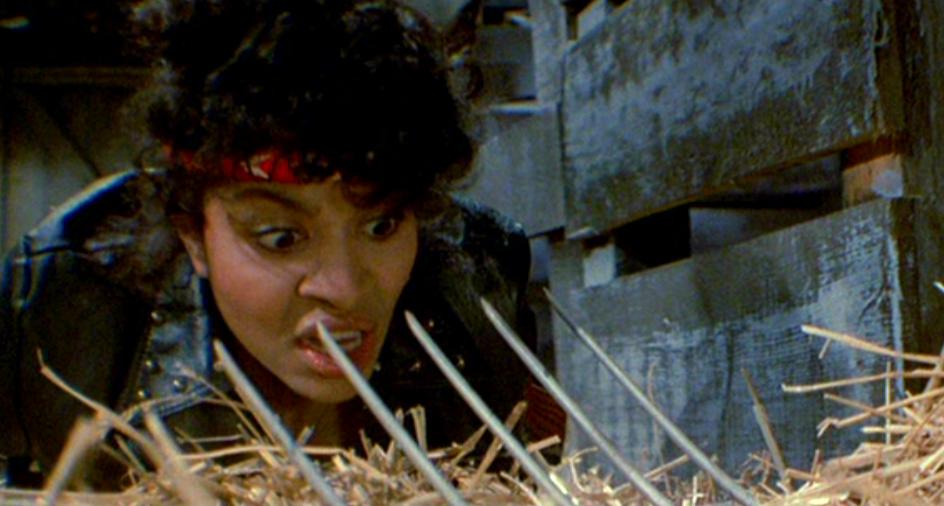 Once Shelly and Vera take off, the biker gang follow close behind them to the house, where they siphon the gas from Chris’ van. Fox enters the barn and starts swinging from the top, while Loco yells at her to get down. Things get intense when Loco discovers Fox’s body hanging by a pitchfork through her throat and soon meets his fate at the hands of Jason. Ali comes in to get his friends and is dispatched by Jason as well.

After a few more 3D tricks, night falls on Higgins Haven. Chris and Rick go for a ride to a secluded spot where Chris recounts her encounter with Jason a year ago. It is alluded that instead of murder, Jason may have sexually assaulted Chris.  During this time, Vera goes out on the dock where she receives a jolt and half courtesy of Shelly. It seems Shelly swam from another part of the lake, stayed underwater and waited for the right time to scare Vera. 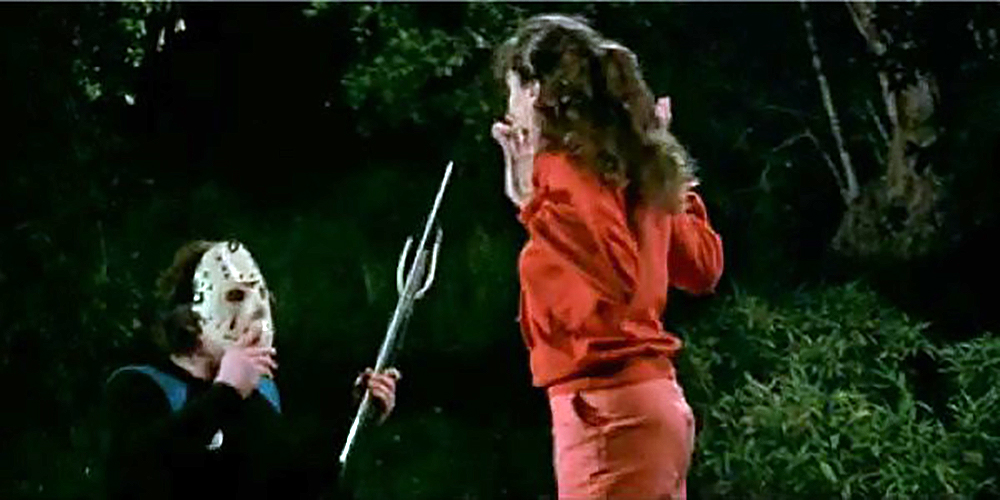 Typical dick move on Shelly’s part, however when he comes out of the water he is wearing something special. No its not his wet suit, it’s the goalie mask he’s wearing that will forever change the face of the franchise and horror as we know it.

After he wanders into the barn thinking that Chuck and Chili are having sex, Vera is still at the dock when she realizes she has Shelly’s wallet. Instead of keeping it closed and minding her own business, she decides to rummage through it causing her to drop it in the water. As she is going to grab it, Jason shows up wearing Shelly’s hockey mask and holding Shelly’s harpoon gun, which promptly uses to shoot in Vera’s eye. 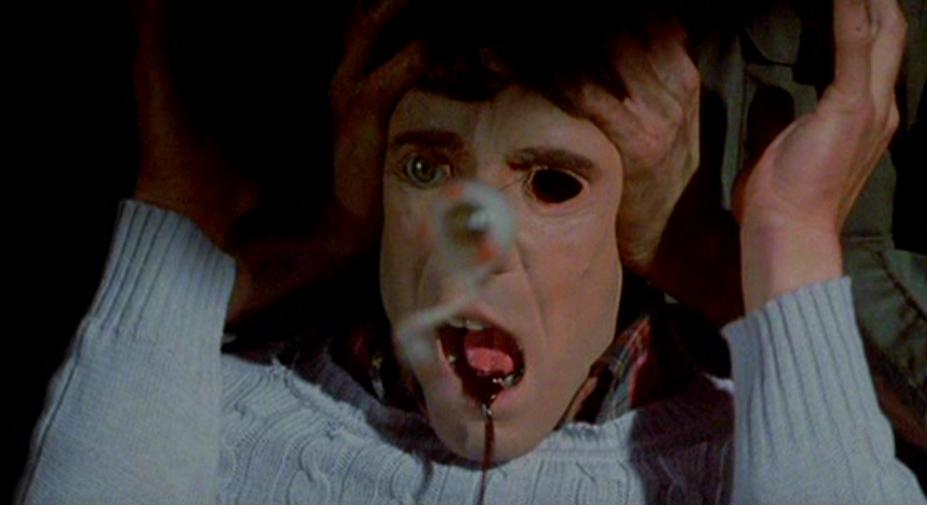 From this point, it’s a free for all for Jason as he dispatches Andy during a handstand, pregnant Debbie on the hammock Kevin Bacon style, and the 2 stoner characters of Chili and Chuck. This sets up the final act of Chris vs Jason, during which Jason squeezes Rick’s head so hard his eyeball shoots out which looks super gnarly in 3D.

Chris and Jason have their final showdown in the barn which includes Jason hanging by a noose around his neck and getting an axe to the head. In of the most intense scenes in the franchise, you expect Jason to get up for a final jump scare, yet he’s perfectly still.

(*SPOILER* The ending is a reenactment of the first movie, only it’s Mrs. Voorhees that emerges from the lake — and somehow with her body intact.) 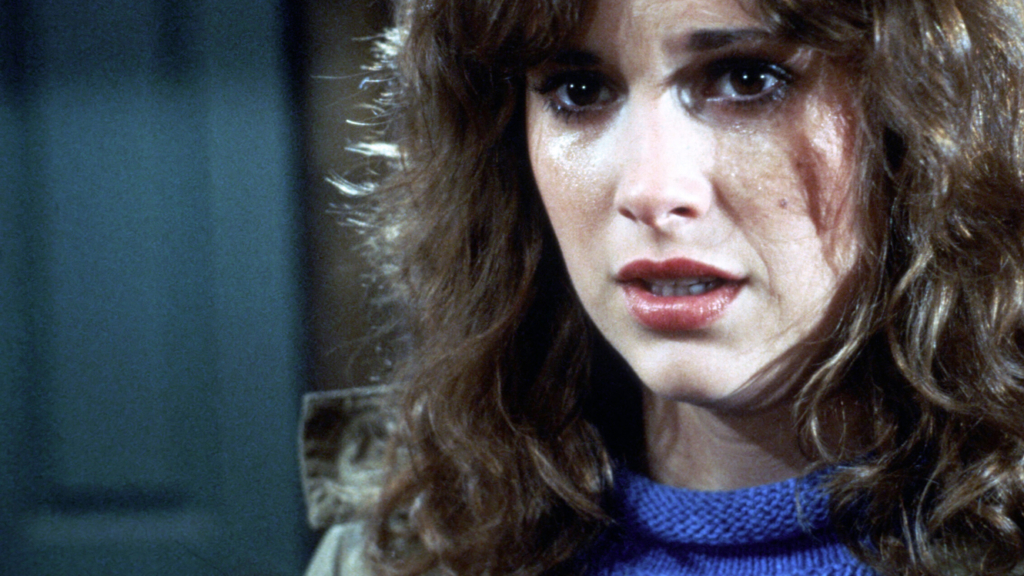 Speaking of masks, the historical significance of this film is monumental, as this is the first time Jason dons his iconic hockey mask — a look that would be the staple of the character from here on out.

The 3D effects are obviously best seen in that format. So, if you get a chance to see it when it plays at a theater near you, you should absolutely do so.

Overall, it’s best to watch this entry in a mini marathon with the Original, Part II and The Final Chapter, as they are one collective story with an actual ending.