While far from perfect, and far from Crystal Lake, The 13th Friday is a supernatural horror film with some creative ideas and solid effects. 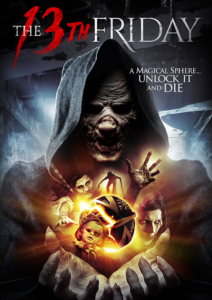 A group of teens find themselves trapped by a curse when they enter a haunted house, which has been possessed by an enraged entity who died on Friday 13th.

To overcome the curse and stay alive, they must sacrifice one person every month over the next 13 months, so the entity can collect the victim’s souls in a mechanical sphere ball known as the calendar. But when the final sacrifice (who is also one of their own) escapes, the curse is not broken. Now the teens are now the target of the entity who has come to claim their souls.

Despite what the title may indicate, it has very little to do with the Friday 13th or the slasher film series, although it does make for some clever marketing.

The 13th Friday is a supernatural thriller, which has plenty of ideas, even though it is unsure where it wants to go.

The film could have concentrated more on the group completing their kills, developing a story around how they lure their victims before they are sacrificed. However, in The 13th Friday these scenes are indicated briefly in a series of montage sequences. The first two kills show a woman being drowned in a bath, and another tied up in a car where she is killed by the car fumes, with several of the other deaths only suggested through a series of missing person posters.

The 12th kill however is conducted in an underground cave, with the group now assisted by some disfigured crawling demons and a stronger, robed demon who completes the kill. It looks impressive, but the film never explains why they suddenly have help from the demons — or why they didn’t have help killing the original victims. Like so many ideas in the film, these ideas are thrown in without explanation, before moving onto the next scene.

With the first 12 kills now completed, the main film focuses on one member of the group, Alison (Lisa May). Plagued by guilt over the actions of the group, Alison reaches out to the families of the people who have been sacrificed. But when she makes contact, she is only able to bring herself to say that she is sorry for their loss.

It is a liability and weakness, which is noticed by the rest of the group, who in turn agree that she should be the member of the group to be offered as the final sacrifice.

May gives a solid performance in the film and stands out amongst the cast, although this is probably because she is the only character is the film who is really developed. Apart from the opening sequence where they are all together, the remaining cast members are only really brought back into the film to briefly expand the story or to set up a scene, which leads to their demise. Because you don’t have any real connections to these supporting characters, it’s hard to care when they are killed.

The highlight of the film were the special effects, where were quite impressive considering the low budget. There was an effective mix of both CGI and practical effects throughout. A couple of scenes really shine, including one with a demon emerging from a phone and another with a young girl burned alive. These scenes look great and help set up the rest of the film.

The film is not short of ideas, but it feels like a combination of several horror films that have been merged together.

The execution is good for most of the film. Although it seems to move from one idea to the next, without a conforming sense of direction. The film feels as though it was trying to tackle as many ideas as possible, perhaps to act as a showcase. But it all becomes too convoluted.

The 13th Friday is an interesting concept with some creative ideas, but it is let down by a lack of character development. However, it is a promising start for writer and director Justin Price. So if you’re looking for something new to watch this Friday the 13th, you might consider this a worthwhile alternative to the traditional visit to Crystal Lake.

The 13th Friday premieres on VOD 10/10 from Uncork’d Entertainment.