“Harpoon” gleefully flees from the shadow of its overly simplistic premise, by providing a sharp-witted and gruesome dark comedy. 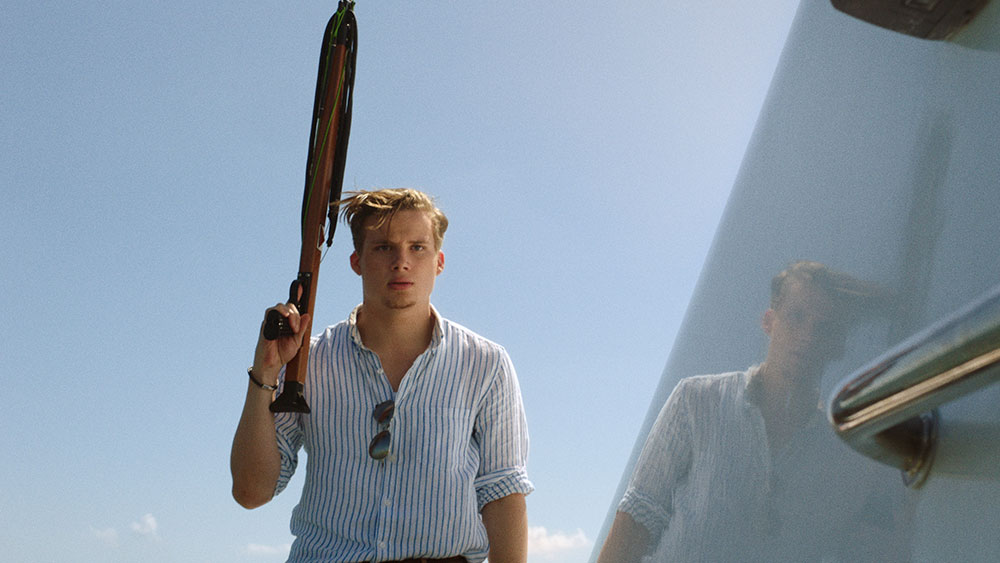 The above quote from the film encapsulates Harpoon‘s steadfast commitment to its dark comedy roots. No matter how dire things may seem for our beleaguered cast, ample room is made for laughs at their expense. And laugh, you shall. Harpoon is a no-nonsense dark comedy thriller that delivers exactly what it promises, along with a surprise or two.

Written and directed by Rob Grant, Harpoon follows three friends setting sail for a day cruise. This impromptu trip serves as penance for Ritchie (Christopher Gray) almost beating Jonah (Munro Chambers) to death. Moments after this bloody and explosive confrontation, a film reel-styled intermission abruptly interrupts the action. This is only the first of such interruptions. These segments are narrated by Brett Gelman (Stranger Things) and provide the audience with hilarious and vital exposition regarding our protagonists.

Ritchie is an entitled snob who is prone to fits of rage, which is evident from the first scene. Jonah is a wimp who feels as if the world is against him. Sasha (Emily Tyra) is Ritchie’s reluctant girlfriend and a close friend of Jonah’s.

This powder keg of personalities and secrets is primed, and slowly but surely the fuse of their combustible oceanic retreat is lit. The potential to devolve into complete chaos is most definitely on the horizon. As secrets begin to emerge, the trio succumbs to paranoia and their friendship morphs into a bloody game of cat and mouse. 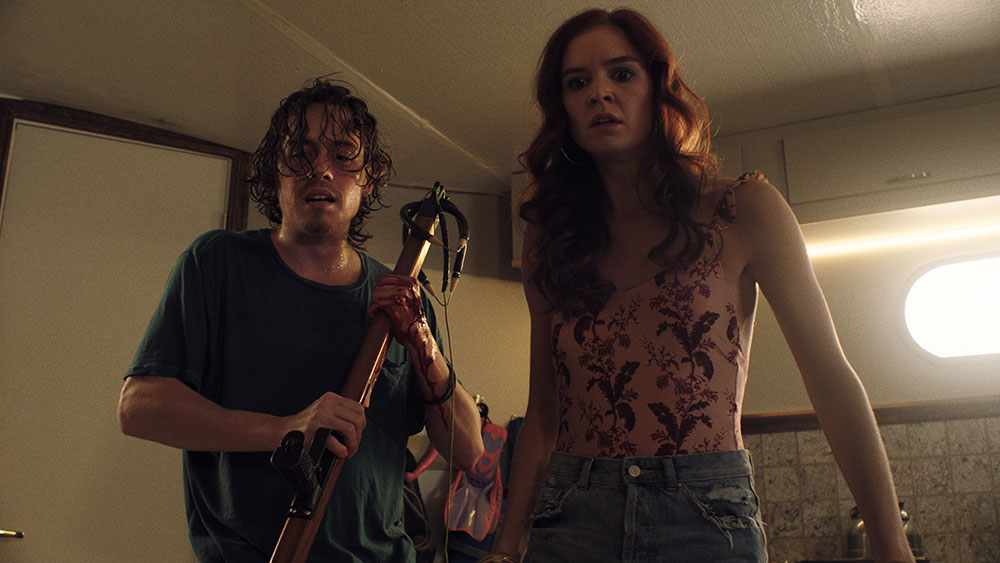 Rob Grant’s no-nonsense, you get what you see approach to storytelling makes for an engagingly brisk thriller.

While you can see the trajectory and consequences of events a mile away, you’re either laughing too hard or wincing at its gruesomeness to let it bother you.

Given the bloody twists and turns, I was constantly surprised to find how often I was laughing out loud. Between the sharply playful banter and Gelman’s periodic monologues, this is a film that surprises with its quality laughs. 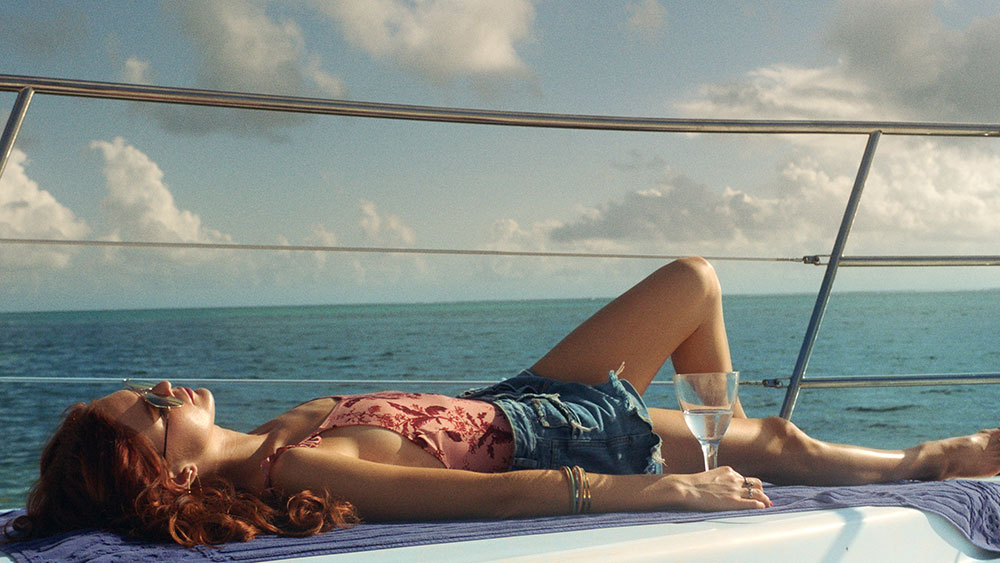 More importantly, though, its humor never outstays its welcome and evolves with the protagonist’s situation.

“Oh, we’re out of drinking water? Why not an entire scene debating whether or not to use seagull’s blood as a means of hydration?”

As you can see, this idyllic cruise quickly becomes anything but.

Further complicating and propelling the plot, Ritchie’s boat breaks down and the trio becomes stranded at sea. As the castaways become increasingly desperate and tensions spill over, the dark humor fully leans into their collective misery. By making light of the more dire scenes, it allows its straightforward premise to be entertaining throughout. 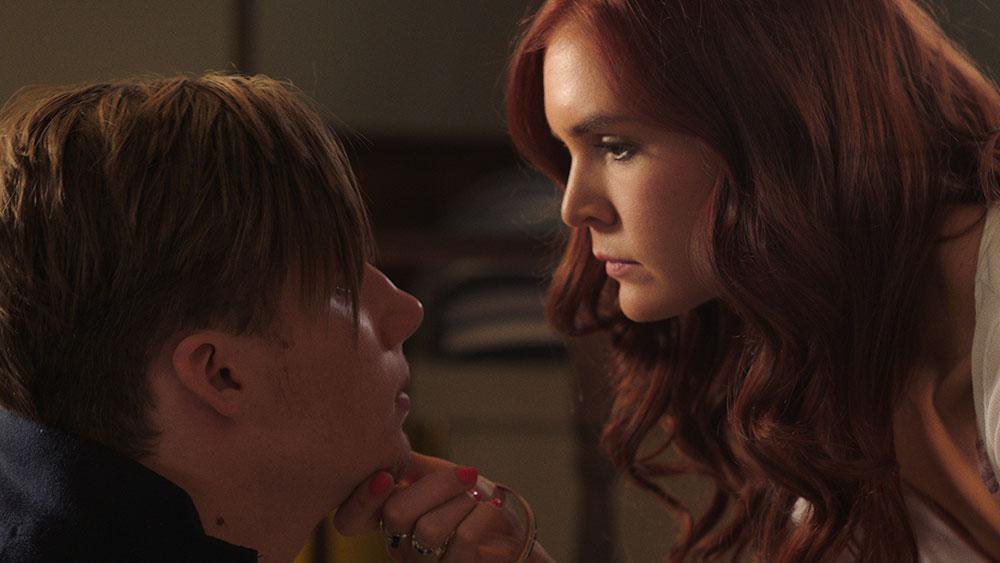 Yet as surprisingly funny as Harpoon is, it never undercuts the more gruesome survival of the fittest moments.

The retreat turns into a bloody game of cat and mouse as allegiances are made and resources become scarce. As their situation becomes more dire, the greater the change witnessed in their personalities. A character who the audience may have been wary of initially has ended up being rooted for, which allows characters to grow past their external trope-heavy personas.

This is a testament to the relatively unknown cast who are more than capable of giving both dramatic and physical performances. Seeing how this volatile situation molds each of their personalities is both shocking and highly amusing. 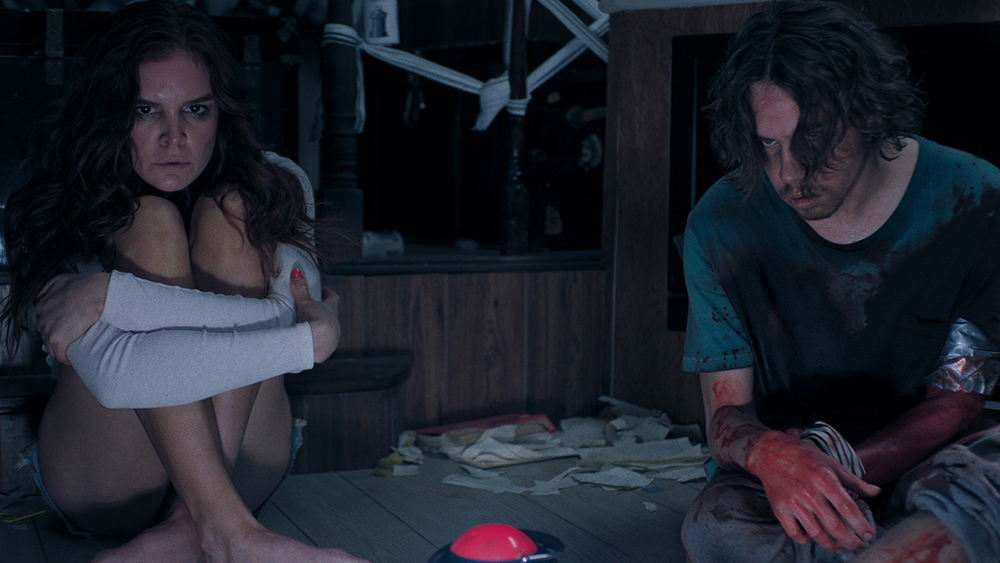 This further makes the unexpected twists in the latter half of the film that much more unexpected.

As the trio’s actions become more unpredictable, the more their sanity begins to unravel. Given how straightforward the film’s premise, the twists provide a breath of fresh air that allows the third act to be its most exciting and enjoyable.

This is not something most horror thrillers can boast.

Harpoon truly surprised me. From the outset, it seems like a fairly simplistic and predictable genre film. And, to be fair, it is just that. But, it is Rob Grant’s ability to smartly blend dark humor with violence that energizes its simplistic premise, serving as both a strong debut and a showcase of his potential for future films.

Maintaining a consistent balance of laughs and carnage is no easy feat, but it’s these aspects which allow Harpoon to chart its horror-thriller course successfully.

Harpoon opened in select cinemas on October 3rd and lands on VOD and Blu-ray on Oct 8th.